Menu
More
Kathryn
|July 5, 2019
As part of my Event and Business Management degree, I decided to move to Iceland to join the marketing department at Arctic Adventures. I love exploring, photography and going on new adventures.

July is the warmest month in Iceland, so it's an ideal month to visit. Here are some fun ideas on what to do when visiting this wonderful country in July!

While the rest of the world suffers in the summer heat, Iceland’s temperatures in July are still perfect for exploring. Not only is July the warmest month in Iceland — it also has the longest daylight hours and clearest roads. With so many perks to visiting Iceland in July, you have no excuse to not get your adventure on.

Here’s your ultimate guide to Iceland in July, from lava caving to the world’s best road trip and the cutest puffins you’ve ever seen.

Top Things to Do in Iceland in July

Iceland’s lava tubes caves are among its most unique features, formed by volcanic eruptions many eons ago. Snow blocks the entryways for much of the year, but in July you’re in luck. The way is cleared to crawl and climb your way around this underground world.

Many of Iceland’s best hikes are only accessible during the summer months, making July a rare opportunity to see some of the island’s most breathtaking views.

One must-do July hike is Glymur Waterfall, just an hour outside of Reykjavik. This tour combines Iceland’s second-tallest waterfall with stunning bay and mountain scenery, making it ideal for any adventurer.

More advanced hikers can embark on the Thorsmork hike. According to popular lore, this valley is said to have been formed by the crash of Thor’s mighty hammer against the Earth. Guides will bring you up close to some of Europe’s largest glaciers.

If you want to see as many of Iceland’s natural wonders as possible, you can’t do better than the Landmannalaugar 3-day hike. Nestled deep in the Icelandic wilderness, Landmannalaugar boasts valleys, mountains, lava fields and volcanoes.

And those are just the highlights. Check out our picks for Iceland’s best hiking routes.

Driving the Ring Road in Iceland

Gigantic glaciers, spectacular waterfalls, rustic villages – these are just a few of the reasons why Iceland’s Ring Road is called one of the world’s best road trips. July is one of the best times of year to embark on this legendary journey. Plan your own road trip carefully, or join a tour to ensure that you don’t miss anything along the way.

For the independent adventurer, July is the best time to explore Iceland without fear of any bumps in the road. From glaciers to geysers to lagoons, customize your tour to feature your top destinations. Then leave the rest of the planning to us, rental car included. All that’s left to do is shift into gear and drive.

July waters provide smooth (and not-so-smooth) sailing to explore Iceland’s waterways on a jet boat tour. Racing on white waters between rivers and waterfalls, it’s hard not to feel like James Bond.

Camping in Iceland in July

Long daylight hours make July one of the best times of year to go camping in Iceland. Settle to sleep under the midnight sun, surrounded by mountains, waterfalls and even natural hot springs.

Camping is one of the most affordable options for touring Iceland, making July a great choice for thrifty travelers.

Iceland has a few camping rules in order to protect its natural habitat, so make sure to read up before you head out.

Best Things to See in Iceland in July

Can you say zzrrrrr? No, it’s not Icelandic slang – it’s the chainsaw-like noise that puffins in Iceland make.

Sixty percent of the world’s puffin population resides in Iceland in the summer. During puffin season, tourists have a 100% chance of sighting the seabirds. Don’t forget your camera — these little guys love to pose, and they’ve been practicing all winter.

At last, you have the chance to cross “whale watching” off your bucket list! Your chances of spotting these mighty beasts are at their highest in July, when more whales have migrated north to Icelandic waters. Set out on a whale-watching tour and your chances of seeing the gentle giants are essentially guaranteed.

Events and Festivals in Iceland in July

This classical music festival is one of Iceland’s most unique cultural events. Hosted in the charming village of Reykholt, the chamber music festival has occurred on the last weekend of July for over 20 years. This year’s Chamber Music Festival, from July 26-28, features some of Iceland’s greatest musical talents.

If you like your festivals with some authentic Icelandic flavor, look no further than the Siglufjörður Folk Festival. Held July 3-7, this folk music festival features Icelandic and Scandinavian traditional music. Submerge yourself in Icelandic folk tradition while surrounded by the dramatic mountain peaks of Northern Iceland.

There’s probably no cooler place to be in July than at the Bræðslan music festival. The festival is held during the last weekend of July in the village of Borgafjörður Eystri, pop. 110. Of Monsters and Men have performed at Bræðslan, along with other indie artists.

That’s just a taste of the wide-ranging cultural events happening in Iceland in July. Check out our guide to festivals and events in Iceland.

Things to Know Before Visiting Iceland in July

Weather in Iceland in July

The average daytime temperature in July is 55 °F (13 °C), but it can reach up to 68 °F (20°C). While not exactly tropical, the mild weather and abundant daylight allow you to make the most out of the Icelandic summer. That being said, Iceland’s weather is known to be unpredictable, so make sure you are prepared for any curveball the island may throw at you.

Check out for more information about the Iceland weather.

You won’t see the Northern Lights

It’s just unlikely. The Northern Lights can only be viewed when it is very dark outside, whereas July is one of the lightest times of the year. That being said, you’ll leave with a great excuse to come back to Iceland in the winter!

What to Pack for Iceland in July

Even though the sun is out, that doesn’t mean you can forego your layers. Make sure to pack these essentials for your trip to Iceland in July:

Tours in Iceland for July

Canyon Rafting in Iceland in July

Drifting below the mighty Gullfoss waterfall, this canyon rafting tour lets you appreciate nature from a new angle. This tour is appropriate for all experience levels, so don’t be intimidated if you’re a first-time kayaker.

The ultimate summer tour includes all the best that July in Iceland has to offer. Hike glaciers, bop in the Blue Lagoon, relax in natural hot springs, go whale watching and see all of that stunning scenery. This is a summer-only opportunity for the traveler who wants to get the most out of Iceland in July.

Into the Blue – Snorkeling in Iceland in July

Imagine yourself snorkeling between continental plates, exploring a tectonic crack in the earth’s surface. Then imagine that crack lit up by the July northern sun, creating a stained glass window illusion called “The Cathedral.” The unique Silfra Fissure snorkeling is accessible all months of the year, but July is perhaps the most breathtaking.

Kayaking in Iceland in July

Summer is kayaking season in Iceland. We offer affordable sea kayak tours for every experience level and time constraint. With so many options to choose from, you are destined for an unforgettable day on the water.

Ready to experience summer weather in Iceland? Check out our bestselling Summer Tours!

Thinking of visiting Iceland in July? Or know someone who is? Share this with them! 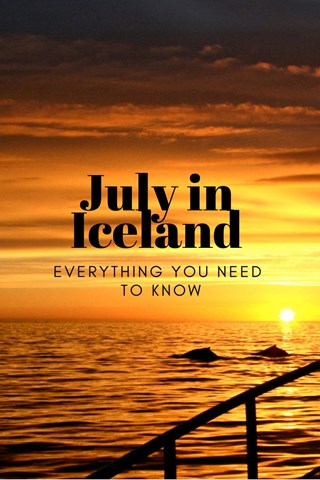 Iceland in August: Everything You Need to Know