Lava cave tours in Iceland prove that the country is full of surprises — both on the ground and underneath it. Huge lava fields on the surface cover miles and miles of underground tunnels.

Lava caves were formed by numerous volcanic eruptions over thousands of years. These hidden chambers are full of geological history and just waiting to be explored! Visit the lava caves or combine your tour with other activities for a day full of adventures.

Feel the rush of adventure as one of the longest lava tubes in Iceland unfolds in the beam of your headlamp!

Explore an extraordinary lava tube, visit Thingvellir National Park, Gullfoss Waterfall and Geysir, and hunt the Northern Lights on this incredible 3-in-1 adventure!

Discover the ancient lava tubes of Raufarholshellir Cave on a thrilling caving adventure!

Join us into a craggy, volcanically scarred world hidden beneath the earth’s surface – to one of the longest and most famous lava tube caves in Iceland.

Explore one of the longest lava caves in Iceland. Then discover the depths of Silfra Fissure, where underwater visibility stretches more than 328 ft (100 m). Finally, cap your day off with a breathtaking Northern Lights show!

The Golden Circle is home to some of the most fascinating sites and underwater destinations in the world. Jump in and see for yourself!

Step into a lava cave and immerse yourself in the soothing oasis of the Blue Lagoon Geothermal Spa!

Trot, gallop, and tölt through a volcanic moonscape, then step below the surface into a hidden world of lava caves!

Roar into a world of active volcanoes with a full-throttle ATV ride and underground caving through the same lava fields!

Travel deep into Raufarhólshellir Lava Tube and out to the wild Iceland countryside on a magical Northern Lights hunt!

The 3500-year-old lava cave is a world of ice and darkness, located in the northeastern part of Iceland near Lake Myvatn.

How Do Iceland’s Lava Caves Form?

Iceland is located on the mid-Atlantic Ridge, a geological hotspot. Due to its location, the country has 30 active volcanic systems that form Iceland’s lava caves. After a volcanic eruption, a river of hot lava flows on the Earth’s surface. The stream gradually cools down and the outside of the flow forms a crust. The sub-surface stream of molten lava continues to flow, leaving behind a hardened crust in the form of a tube.

Lava tubes are often multi-layered because multiple rivers of magma flow through them, depositing various minerals. This way the tunnels get reshaped. As a result, every lava tunnel in Iceland is different. The flowing lava splashes, and when it cools down and hardens, it creates stalactites of all shapes and forms.

Raufarhólshellir Lava Cave is one of the longest lava tubes in Iceland. It spans 4,462 ft (1,360 m), with the main tunnel running for 2,953 ft (900 m). The ceiling of the tunnel reaches up to 10 m (33 ft)! The lava tube formed after the Leitahraun Volcanic Eruption around 5,200 years ago. However, it was only discovered by geologists in 1950. Impressive rock formations used to decorate the tunnel’s ceiling, but unregulated visits to the cave caused damage to the lava formations. The tunnel is now only available on guided tours, so join our day tour and explore Raufarhólshellir Lava Cave with an experienced guide.

Thrihnukagigur Volcano Cave has been ranked one of the must-see places in the world by CNN Travel. The dormant volcano is accessible through its top crater. An open elevator lowers visitors 400 ft (120 m) to the bottom of the volcano’s magma chambers. The inside of the volcano is covered in enchanting green, red, and brown colors due to minerals deposited by the last eruption. Standing inside the massive Thrihnukagigur Volcano is a truly unique experience, so join us on a day tour and explore the inside of the volcano!

Lofthellir Cave near Lake Myvatn is home to the largest known natural ice sculptures found in any lava tube in Iceland. The cave was only discovered in the 1980s after an earthquake destroyed the roof of the cave. A plane pilot flying above the area noticed the massive hole in the ground and the hidden world of lava and ice was soon discovered. Now this magical 3,500-year-old lava cave is available to visit on a guided day tour from Akureyri or Myvatn. 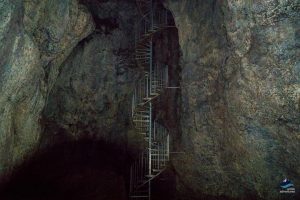 Vatnshellir Lava Cave lies in the depths of Snæfellsjökull National Park. Formed during a volcanic eruption 8000 years ago, the cave now is 114 ft (35 m) under the surface of the Earth and stretches about656 ft (200 m). Surrounded by vast lava fields, the entrance to the cave is not always noticeable, yet the cave is definitely worth a visit!

Once you reach its depths, you’ll be stunned by the cave’s raw beauty, lava formations, and many layers of hardened lava. Watch your step to protect yourself and the cave from any accidents!

Located just 30 minutes from Reykjavik, Leidarendi Cave is the perfect place to spend a rainy afternoon. The cave has two chambers from two different volcanic eruptions. The first eruption took place around two thousand years ago and the second around a thousand. Eventually the roof of both chambers collapsed, turning Leidarendi into one long tunnel cave with a few smaller chambers.

The cave is famous for its color palette. It is saturated with shades of red from iron, yellow from sulfur, and green from copper. The name of the cave means “The End of The Road” and comes from a dead ram found in the deepest corner of the cave. To this lost lamb, the cave truly was the end of the road.

Vidgelmir Cave is the largest lava cave in Iceland. The cave was created by a massive eruption in 930 CE and spreads over a 78 sq mi (200 sq km) area. It is located in Borgarfjörður in West Iceland and is easy to access. In 1993 during archeological excavations, Viking remains and jewelry were found and preserved. Now the cave is only accessible through guided tours. The cave sparkles with various colors because of the many minerals brought by the flow of lava thousands of years ago. 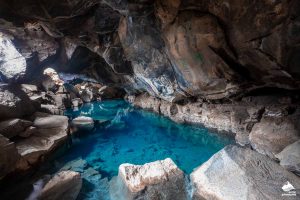 Grjotagja Cave is one of the few caves in the country with a hot spring inside. Back in the day, the caves were feared by Icelanders and believed to be inhabited by  trolls. In reality, the caves were a hiding place for outlaws. A famous outlaw named Jón Markússon lived in Grjótagjá for a long time and would bathe in  the hot spring.

In more recent times, the cave has become a popular hangout for Icelanders. After more than a dozen eruptions in the 1980s, the water in the spring became too hot to bathe and now it’s only suitable for caving. The cave was featured in an episode of Game of Thrones.

Buri Cave is one of the most breathtaking lava caves in Iceland and it is located under Leitarhraun Lava Field.The first 131 ft (40 m) of Buri Cave were discovered in 1992. In 2005, geologists decided to dig deeper and discovered the rest 295 ft (900 m). The cave was created around 5000 years ago by a raging lava river. The river was so fierce that it burnt a 55 ft (17 m) deep vertical lava pit.

The cave’s chambers are decorated with various lava rock formations, stalagmites, and stalactites. During the winter, ice freezes in unique patterns and creates a stunning sight.

Lava tubes are often affected by natural events such as earthquakes. No matter how stable lava tunnels in Iceland might look, one can never be certain of how natural forces have affected the ancient rocks. That’s why lava caves should always be visited only with a guide. Our guides are experts and make sure everyone on tour is safe and sound!

Lava caving is a fun activity on its own, but you can also combine it with another tour and turn it into a full-day adventure.

Visit Raufarhólshellir Lava Tube and see the highlights of the iconic Golden Circle in one day! Thingvellir National Park, Geysir Geothermal Area, and Gullfoss Waterfall are important natural sites that everyone needs to visit in Iceland. If you’re traveling in winter, add a hunt for the Northern Lights for the ultimate Icelandic experience!

If you’ve already visited the Golden Circle, then join a Raufarhólshellir and Northern Lights Tour to enjoy the best Iceland has to offer both under the ground and in the sky.

Snorkeling in Silfra Fissure is another unique experience on offer in Iceland. Snorkel between two tectonic plates and explore the underwater world! Combine snorkeling with lava caving and visit Raufarhólshellir on the same day, or even add a Northern Lights tour to your itinerary!

Lava cave tours in Iceland can also be combined with a trip to the famous Blue Lagoon Spa, where you can enjoy the healing powers of Icelandic water.

Combine your lava caving tour with horseback riding and meet charming Icelandic horses! The purebred horses are friendly and intelligent. Children love them!

If you’re looking for an extreme experience, try out a caving and ATV tour! Ride quad bikes across vast lava fields and then explore the same fields from a completely different angle: under the ground!

What is lava caving?

Lava caving is an activity that allows you to go under the surface of the Earth and explore caves shaped by flowing hot lava from thousands of years ago.

Can you go to a lava cave in Iceland without a tour?

Lava caves in Iceland can only be visited with an expert guide. Additionally, everyone inside the cave needs to wear a helmet.

Where are the lava tunnels in Iceland?

Lava caves in Iceland are scattered all over the country. The majority are located in the southeastern and western parts of the island, with an occasional cave or two in the north.

Some of the largest lava caves in Iceland are near Reykjavik. For example, the Raufarhólshellir Lava Tube is located less than a 30-minute drive from the capital and is accessible by all vehicles. Thrihnukagigur Volcano Cave is only a 25-minute drive away from Reykjavik.

Varnshellir Lava Cave in Iceland is on the Snaefellsnes Peninsula, and Lofthellir Cave is in North Iceland.

How to prepare for a lava cave tour in Iceland?

When going on a lava cave tour, make sure to wear warm clothing, preferably in different layers. Choose a waterproof top layer and a scarf, gloves, and a hat. Please bring hiking boots (or rent them from us when booking your tour). Your guide will take care of all the necessary safety equipment.