The unique color-changing beach in the Westfjords

A magical beach that changes its colors depending on the weather, time and season. Away from civilization, Rauðasandur Beach is a breath of peace and tranquility on the south coast of Iceland’s West Fjords (Vestfirðir). A 10-kilometer stretch of pulverized scallop shells makes the ground seem like the surface of another planet!

Rauðasandur (Raudasandur), or Rauðisandur (Raudisandur), means “red sand” in Icelandic. While black sand beaches are one of the landmarks of Iceland’s South Coast, this remote part of the Westfjords offers something completely different. The color of the sand changes depending on the weather and season. From different shades of yellow to hues of orange and even pink, the beach never stays the same color for long. 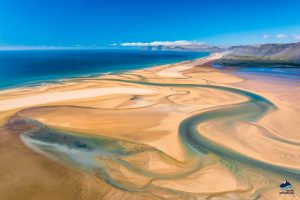 The beach is home to some majestic wildlife, such as seals and many different species of birds, including puffins. If the weather allows, enjoy stunning views of the breathtaking landscape with the mighty Snæfellsjökull glacier of the Snæfellsnes peninsula in the background.

Often described as an oasis of tranquility, the beach is also famous as the scene of one of Iceland’s most notorious crimes – The Murders at Sjöundá.

With dark mountains in the background and red sand on the beach, Rauðasandur is a place full of contrasts. One of the most striking paradoxes is that this tranquil and peaceful shore was the scene of one of Iceland’s most notorious crimes. The Murders at Sjöundá took place at the Sjöundá farm just beside Rauðasandur in the early 19th century. It’s an intriguing story of passion and darkness, where a forbidden love affair ended in mysterious murders.

The story dates back to the early 1800s when two families dwelled on the small farm of Sjöundá. Bjarni Bjarnason lived with his wife Guðrún Egilsdóttir, and Jón Þorgrímsson with his wife Steinunn Sveinsdóttir. 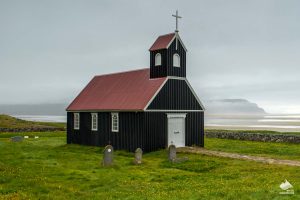 The first mysterious death happened in 1802 – Jón disappeared and was thought to have fallen off a cliff. Three months later, Guðrún unexpectedly passed away, but the local priest could not find anything unusual about her sudden death.

In the autumn of the same year, Jón’s body was washed up on the shore of the Rauðasandur Beach. None of his bones were broken, ruling out the initial theory that he fell from a great height. With these coincidences, locals from nearby villages started suspecting foul play.

A few days later, Bjarni and Steinunn admitted to brutally murdering their spouses. They were both sentenced to death. However, Steinunn suddenly died in prison, but Bjarni was executed and his head and hands were cut off.

The famous Icelandic writer Gunnar Gunnarsson based his well-known crime novel Svartfugl (1929) or The Black Cliffs (1967) on this murder mystery.

How was Rauðasandur Beach formed?

The reason the color of the beach changes with the daylight is the shattered scallop shells that have slowly accumulated on it over the centuries. Thanks to the reflective nature of the shells, on a sunny day, the beach looks like it glows! 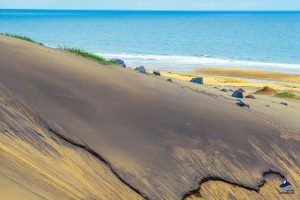 For the same reason, the red-colored sand varies from very fine to some larger pieces of shells that might be quite painful if you walk on the beach barefoot. So be sure to wear some good walking shoes!

Where is Rauðasandur Beach located?

The Red Sand Beach is located on the south coast of the Westfjords region.

How to Get to Rauðasandur Beach?

One of the best ways to travel in Iceland without a tour guide is to rent a car.

Traveling from Reykjavik, follow Route 60 along the West Coast, then change to Routes 62 and 612 in the Westfjords. Take a turn onto 614, the road leading to Rauðasandur. The gravel road down to the beach is quite steep with some sharp turns and requires extra careful driving. 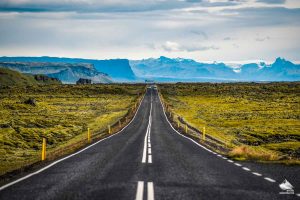 You can visit the Rauðisandur beach with a rental car

Another option is to travel to Stykkishólmur, take the Baldur ferry to Brjánslækur and drive from there.

Once you arrive, there’s a parking lot near the Franska Kaffihúsið (French café) and another one at the Melanes campsite.

The best access to the beach is by walking through either the café or the campsite. There are road signs leading from the campsite to the beach. It’s around a half-an-hour walk, but keep in mind that you might have to wade across a shallow river!

What to do at Rauðasandur Beach?

The South Coast of the Westfjords stretches all the way from Rauðasandur Beach to the cliffs of Látrabjarg. It’s famous for being the westernmost part of Europe and is home to the largest seabird colony in the Atlantic Ocean. Rauðasandur is a perfect place for birdwatching. Take out your camera and try to spot some of those photogenic puffins!

Birds are not the only animals that live on the beach. On some days, you can spot hundreds of seals sunbathing on the shore. If you’re lucky, you might even catch sight of whales playing among the waves. 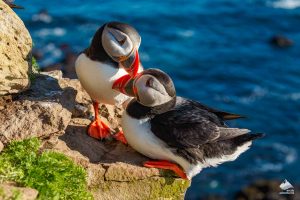 Westfjords is one of the best spots to see puffins

In Iceland, you’ll spot a number of tiny churches, some of which are quite secluded. There’s one just like that near Rauðasandur. A charming little black church with a red roof and white shutters make a great picture.

If you’re visiting in the summer, don’t miss the chance to visit the Rauðasandur Festival at the Farm of Melanes campsite. Every year on the first weekend of July, the Rauðasandur festival has attracted more and more music enthusiasts and performance artists. At this time of the year, the sun never sets and the water temperature rises, so festival-goers often enjoy a swim in the ocean. First organized in 2011, the festival is environmentally friendly and all the profits go towards taking care of the area.

Where to stay near Rauðasandur Beach? 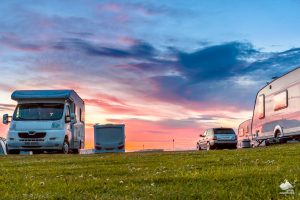 There are quite a few campsites in the area:

Where to eat near Rauðasandur Beach?

If you pack some lunch, you can enjoy it on the beach with some beautiful views. Otherwise, Franska Kaffihúsið (French café) is just near and serves hot meals to passers-by. 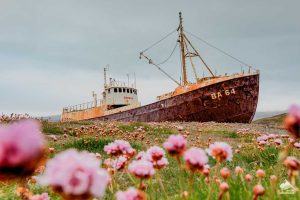