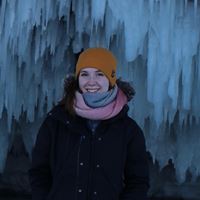 Best Time to See the Northern Lights in Iceland 2019

Many people delay their Northern Lights trip until the “perfect” time to see the aurora borealis —  whatever that means. But as winter descends, there’s no time like the present!

Northern Lights season in Iceland starts in October and lasts through February. The final months of 2019 are your first chance to hunt the incredible light show. 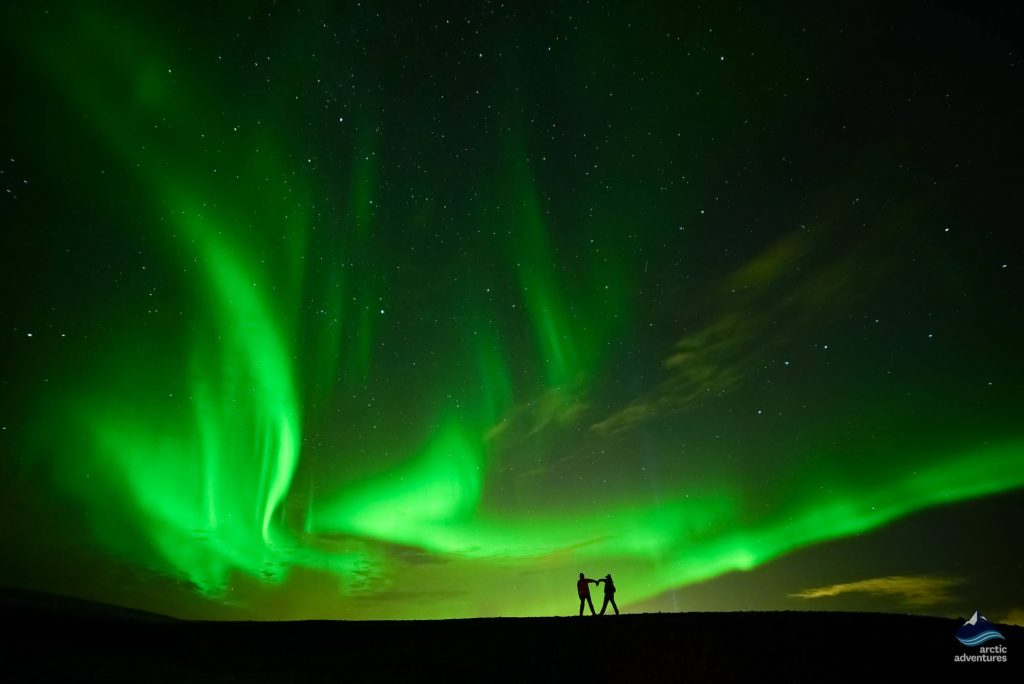 In this guide to the Northern Lights in 2019, we’ll teach you how to determine the best time to seek the lights this year, as well as the best viewing locations. Follow these tips to see the sky explode in color.

All About the Northern Lights in 2019

I’m no physicist, but I can tell you that the Northern Lights are the most astounding proof of nature’s power that you can see with your own two eyes.

As the Earth revolves around the sun, it gets blasted with solar wind. When the solar wind slams into the Earth’s atmosphere, it erupts in a fury of color — the Northern Lights!

The sun runs through 11-year cycles. At the height of these cycles, or “solar maximum,” aurora borealis gets bolder and brighter.  Then, a few years later, the sun relaxes into a “solar minimum.” The Northern Lights still sparkle, but not quite as much. 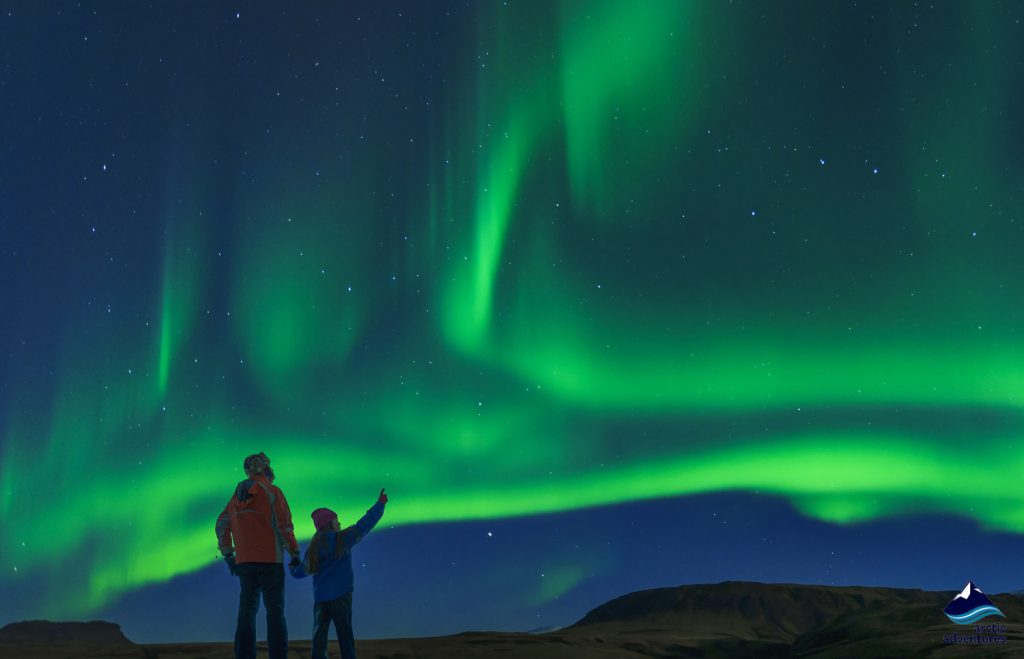 Aurora forecasts allow you to predict the Northern Lights and plan your chase.

So what part of the solar cycle are we in now? 2019 is in a period of solar minimum. That may not sound so great, but solar minimums are actually a boon to Northern Lights hunters! Although the auroras don’t appear as often, they are way more predictable.

Here’s how a solar minimum works. Every 27 days, the sun rotates. At one point during this cycle, the sun blasts strong solar winds at the Earth. So if the Northern Lights are shining bright today, there’s a good chance they’ll shine bright again in 27 days.

The Best Places to See the Northern Lights

To improve your chances of glimpsing the aurora,  drive far out from Reykjavik and away from major artificial light sources. This is a pretty easy thing to do since the vast majority of Iceland is unspoiled and sparsely populated.

Iceland’s most iconic landmarks are popular places to see the Northern Lights. Not far from Reykjavik, admire the lights from Thingvellir National Park, a UNESCO World Heritage Site. The large hill that rises above the park is a great viewing spot. The beauty of Thingvellir is only enhanced by the flashing night sky. 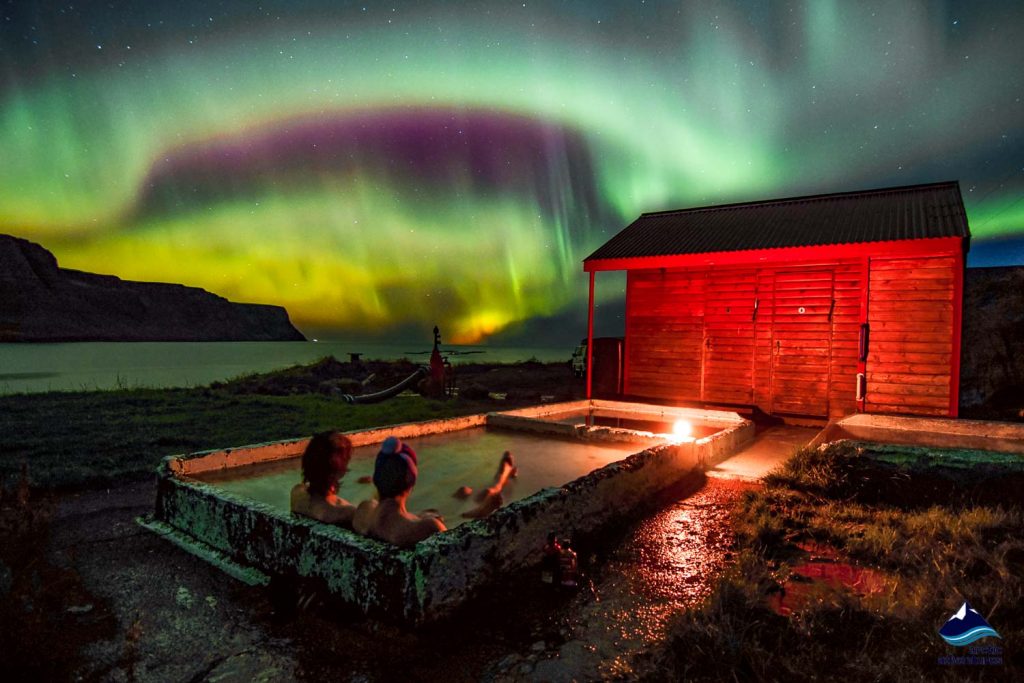 Hot springs, a cabin, and the Northern Lights – what else do you need?

Outside of the Reykjavik area, the village of Vik on the South Coast showcases the lights over black sand beaches and the Atlantic Ocean. Farther along the South Coast, secluded Vatnajokull National Park and Jokulsarlon Glacier Lagoon allow for peaceful Northern Lights viewing.

Even deeper into the wilderness, the Westfjords and East Iceland feature stunning light displays over unspoiled nature.

Head outside and see what the skies have in store for you.

Can you see the Northern Lights in Reykjavik?

Yes, it’s possible to see the Northern Lights in Reykjavik!

In fact, Reykjavik is the only capital city besides Nuuk, Greenland where you can see the Northern Lights. Reykjavikers swear they can see the lights from their bedroom windows during bright auroras!

The most popular viewing spot within the city proper is Öskjuhlíð Hill, at the base of the Perlan Museum. Search for the Northern Lights on the Perlan’s 360° viewing platform until it closes at 10 p.m. After that, huddle together among the trees of Öskjuhlíð. You’ll forget you’re in the city as you stand under the night sky.

Only a couple of miles west of downtown Reykjavik is Grotta Nature Reserve on Seltjarnarnes Peninsula, an aurora paradise. On clear winter nights, locals and tourists bundle up to watch the skies from Grotta Lighthouse.

Can you see the Northern Lights from the Blue Lagoon?

Yes! The Blue Lagoon is a good place to see the Northern Lights because it’s located farther out in nature. The geothermal hot pool is nestled in the wilds of the Reykjanes Peninsula. 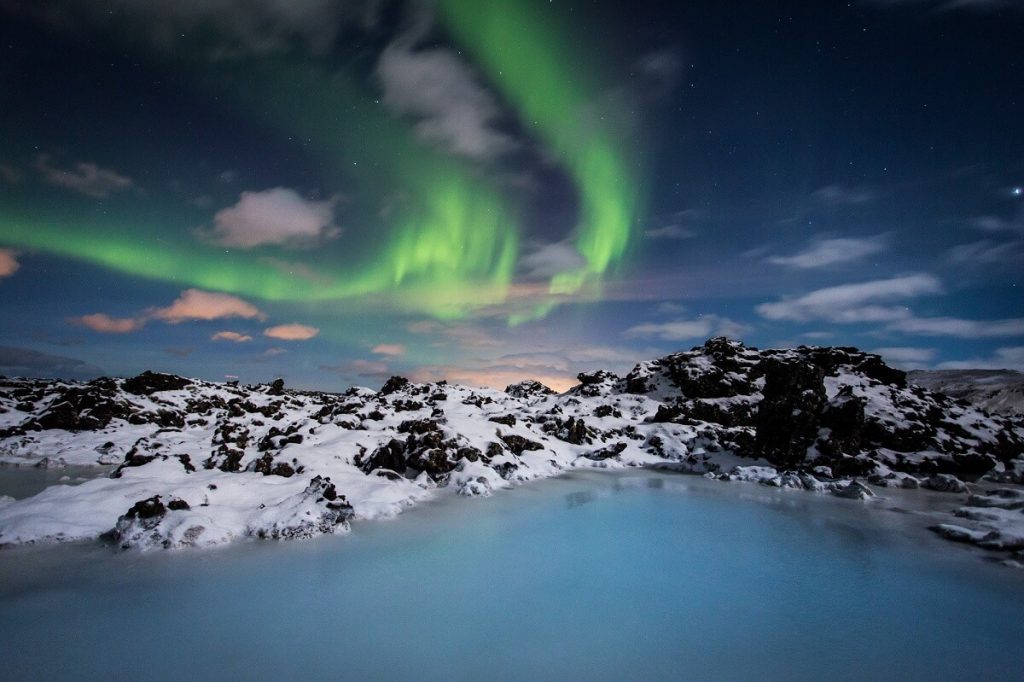 The Northern Lights over the Blue Lagoon

If you visit after sunset, you may get lucky and see the sky flash green as you float on cloudy turquoise water.

When is the best time to see the Northern Lights?

As long as you visit Iceland when the nights are long (September-April), you have a chance. Our Northern Lights tour guides check the forecast every day and hunt out the ideal viewing spots for guests.

The darker the skies, the better chance of seeing the light. Aim for close to midnight.

What is the best month to see the Northern Lights?

Any winter month is a good time to see the Northern Lights. In order for the lights to be visible, skies must be dark and clear. As you get closer to midwinter, the nights stretch on longer and the aurora is more easily sighted. 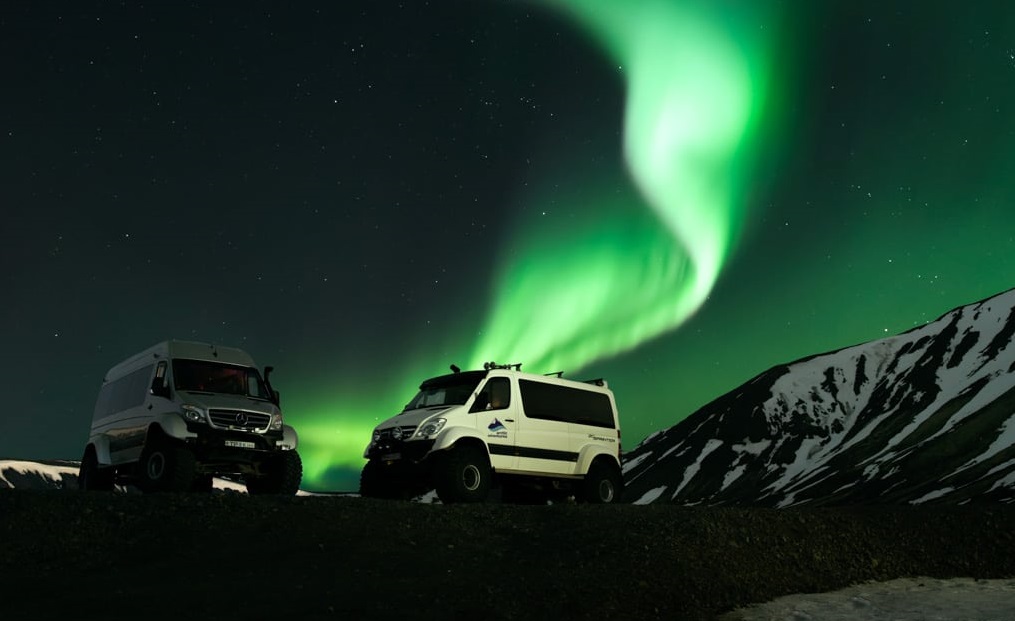 You can see the Northern Lights from late August to May, but it’s best to visit between October and April. The night skies will be much darker, improving your chances.

If you really want an excellent shot at a sighting, visit as close to midwinter as possible. November and February are great times to increase your odds while avoiding the dead of winter.

What is the best time of day to see the Northern Lights?

Around midnight is the best time of night to see the Northern Lights. Your chances are best from 10 a.m. to 2 p.m. That being said, nights last forever in the Icelandic winter. You might catch the Northern Lights at 8 o’clock in the morning or 8 o’clock at night. When the sun’s away, the lights will play.

Northern Lights forecasts tell you the level of solar activity on any given night. They take into account solar patterns and cloud cover to predict how likely the Northern Lights are to appear.

You can look at a few different Northern Lights forecasts on the internet. The most official forecast is by the Icelandic Meteorological Office. 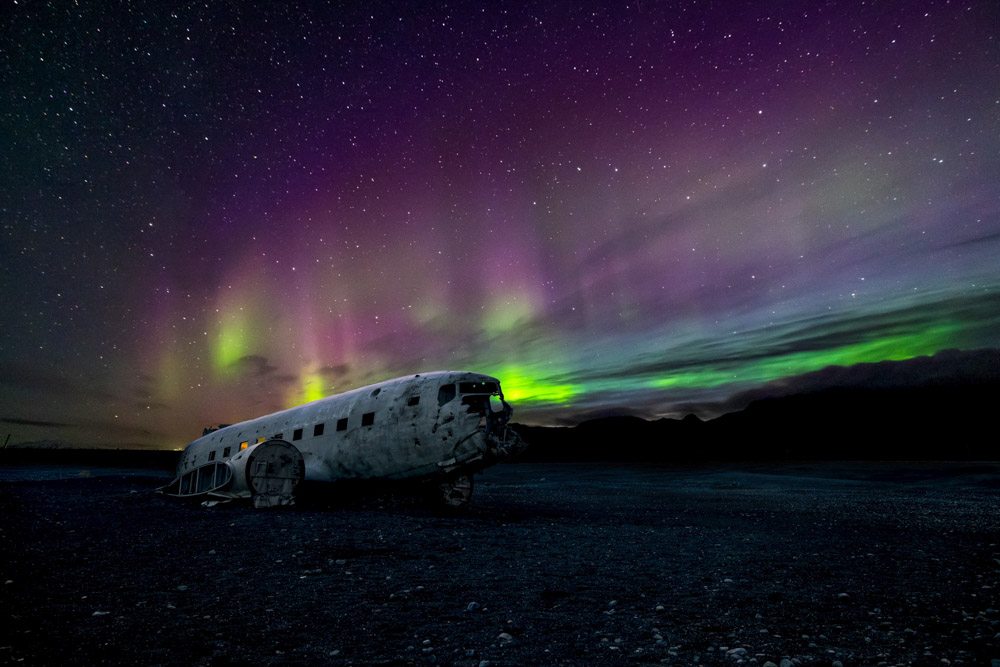 The Northern Lights glimmer over the Solheimasandur plane wreck

Each day, the forecast gives an aurora score from 0-9. The higher the score, the better your chances of seeing the aurora. As I write this, the aurora score is 3, or moderate. That means there’s a pretty good possibility of a sighting. Maybe we’ll catch the Northern Lights tonight!

Want to increase your chances even more? Here are local insider tips straight from Iceland to aid you on your Northern Lights hunt:

If you’re staying in Reykjavik, devote your evenings to the bustling nightlife! No, I don’t mean the clubs (though they’re worth a visit) — I mean the Northern Lights. Each night, our expert aurora guides motor out of Reykjavik in a Super Jeep for a Northern Lights chase. Join the hunt for the best possibility of catching the aurora.

Take your Northern Lights pursuit to the next level in a Super Jeep. Our Super Jeep tours are just like our regular Northern Lights tours out of Reykjavik, except that our aurora guides operate special off-road Super Jeeps to take you farther into nature. Roll off the beaten track, over trails, forests, and rivers that most buses and vans can’t pass. Deep in nature and far from artificial light sources, you might be treated to your own private light show.

Get in the spirit of the season with this ultimate winter tour of Iceland. This 4-day adventure combines the best of Iceland’s winter activities. Hike glaciers, climb ice walls, ride a snowmobile, and warm your bones in the Blue Lagoon. Each day ends with a Northern Lights chase out through the dark wilds of Iceland.

Who would you like to watch the Northern Lights with?

Northern Lights
← Soon You Can Sip Cocktails on Top of an Icelandic Glacier 7 Charming Small Towns in Iceland You Must Visit Now →
Newest Popular Random
Month All Time
This Isolated Lighthouse In Iceland Is The Perfect Place To Survive A Zombie Apocalypse
The Top 5 Spas in Reykjavik
Snowmobiling in Iceland: All You Need to Know
Iceland Named One Of The Safest Countries To Visit In 2020 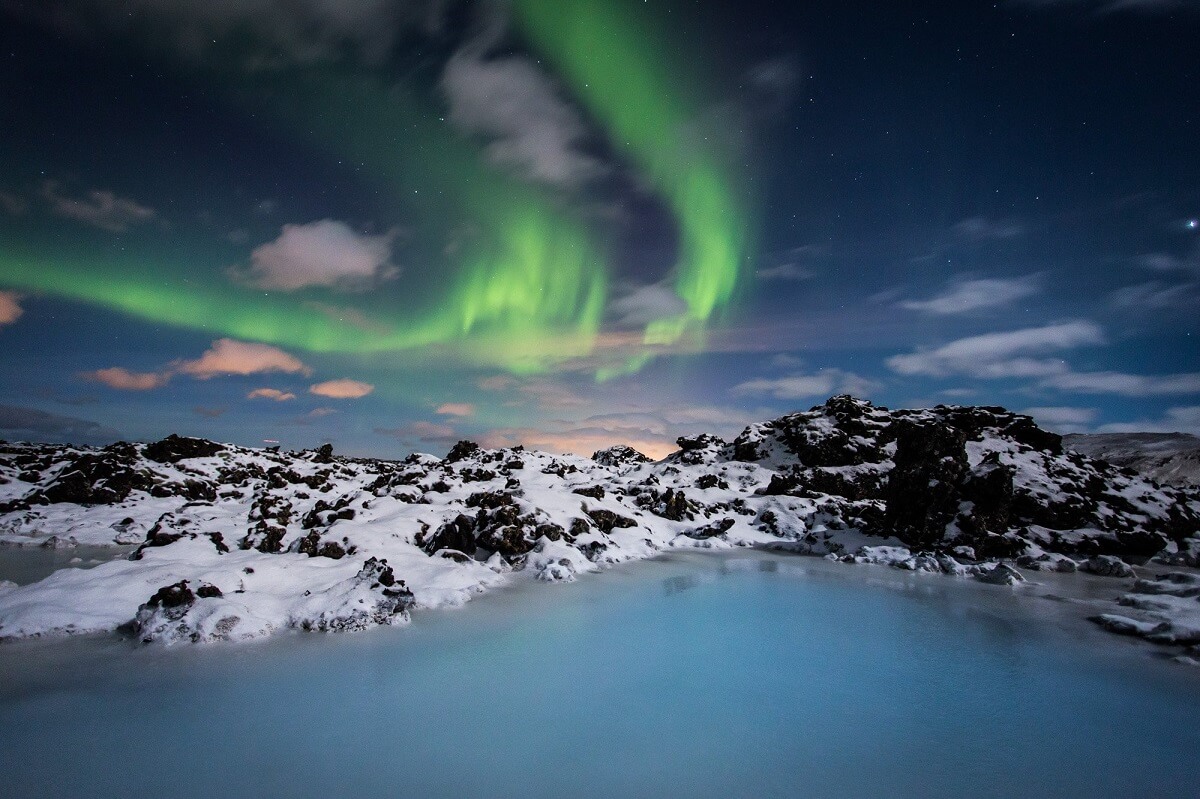 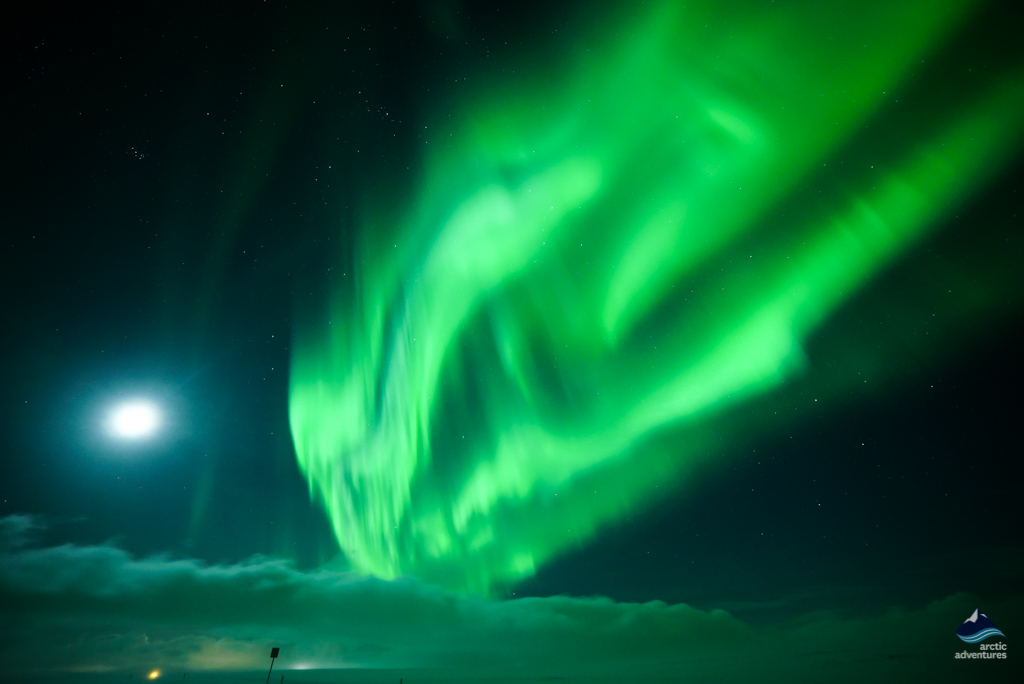 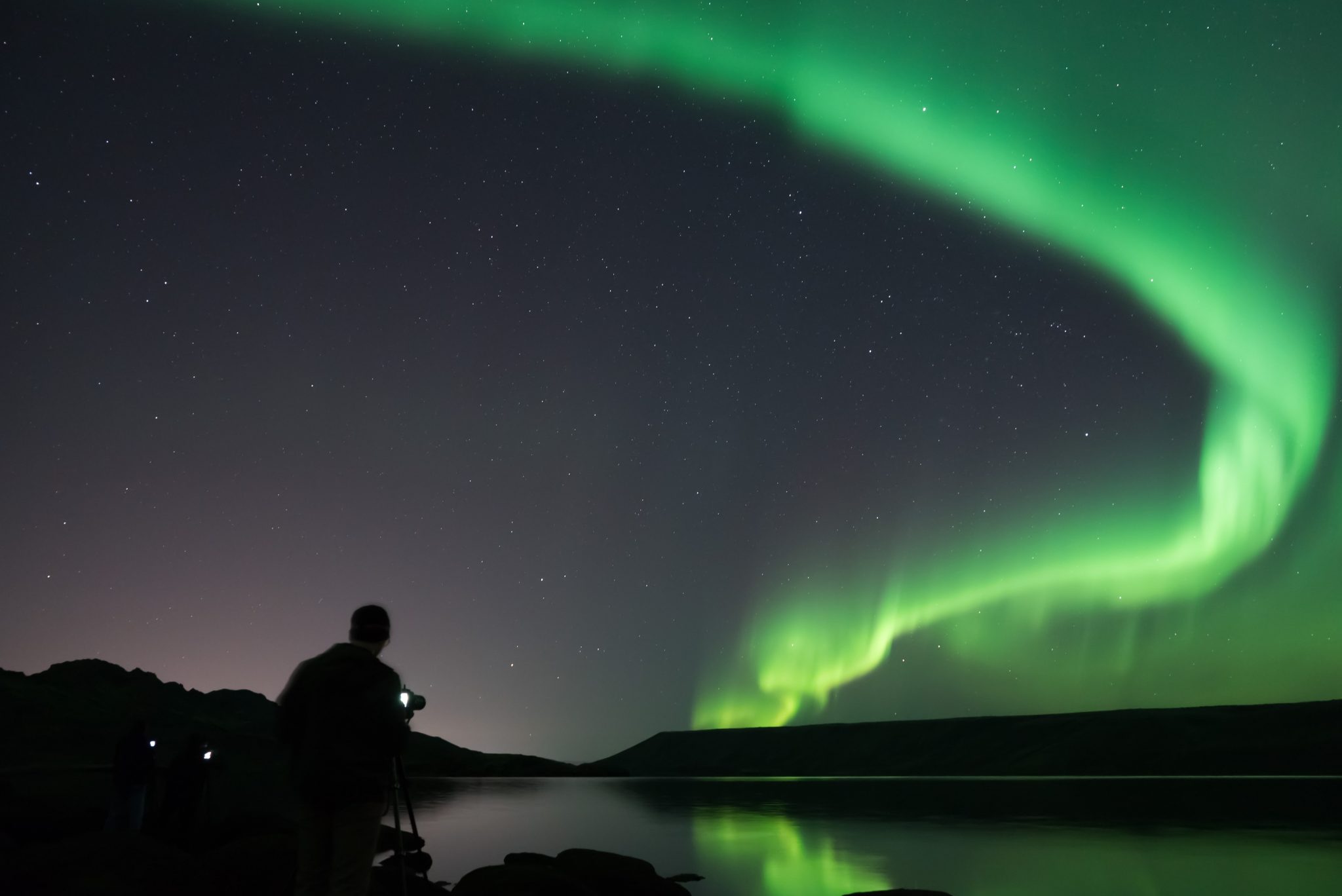 What to know
All about the Aurora Borealis

The Aurora Borealis, the beautiful, colorful, dancing lights in the sky. What are they? Where can you see them and when is the best time to do so? We share our guide to spot this once-in-a-lifetime phenomenon.

The 7 wonders of Iceland, the land of Ice and Fire. This was not an easy choice, it took time, research and thinking but here it goes. The list of the lists, what you NEED to see while visiting Iceland. A tough choice but here goes, enjoy the ride!

December 4, 2017 , By Ragnheidur
What to do
The Best Things to Do in Iceland in Winter