Geysir is Iceland’s famous geyser located along the Golden Circle in the Haukadalur Valley. In recent years, the Great Geysir has stopped erupting. Luckily, the neighboring Strokkur geyser continues puts on a magical show every 4-10 minutes. Stop by to check out Geysir and Strokkur for a once-in-a-lifetime experience!

Geysir in Haukadalur is the most famous geyser in the whole wide world. It is, after all, the one all the other geysers are named after. Geysers are a rare phenomenon and knowledge about them is quite limited. They were almost an unknown thing in the Western world until the 19th century.

The History of Geysir

The geysers in Haukadalur were first mentioned in literature in the year 1294. That year, enormous earthquakes shook the ground, which both created new geysers and ruined some geysers already in the area.

Earthquakes have been known to restart Geysir’s activity but in the year 1630 an earthquake woke Geysir up after 40 years of hibernation. The eruption was so powerful it shook the surrounding ground.

The name Geysir can first be found in literature from the 18th century, they’re described as an unusual natural phenomenon which, at this time, was already of great interest. 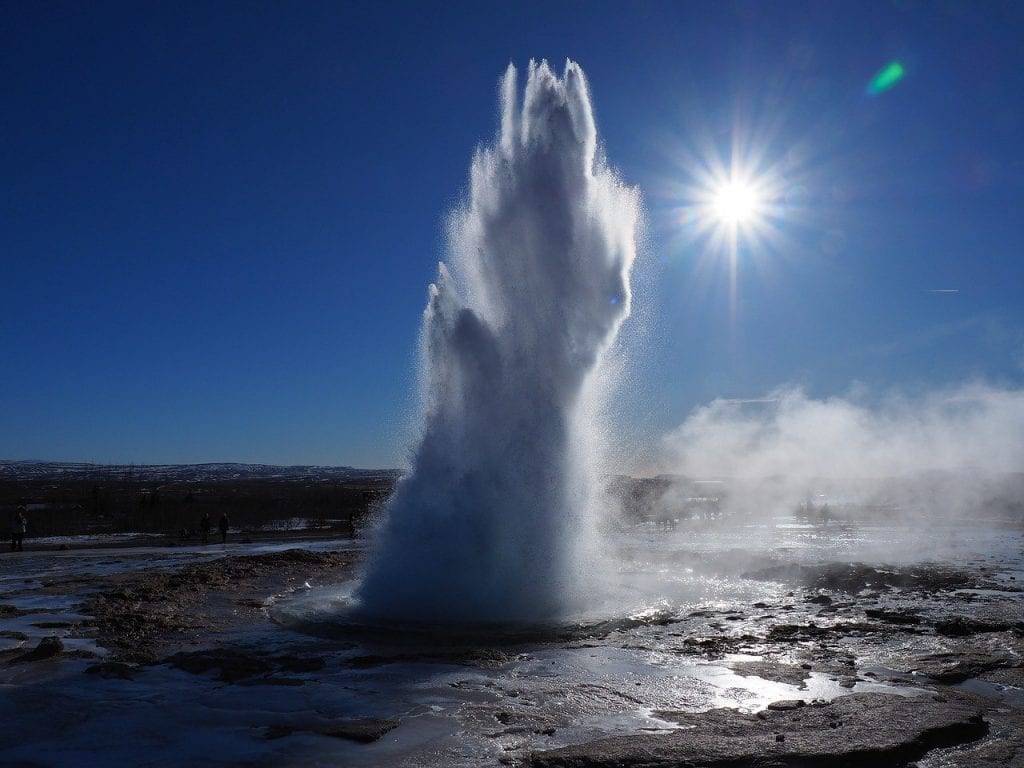 Subsequently, it went almost dormant until the year 1896 when another earthquake revived the beast. As a result, it would erupt multiple times a day, sometimes lasting up to an hour each time and going up to 60 meters (196,8 ft) in height. 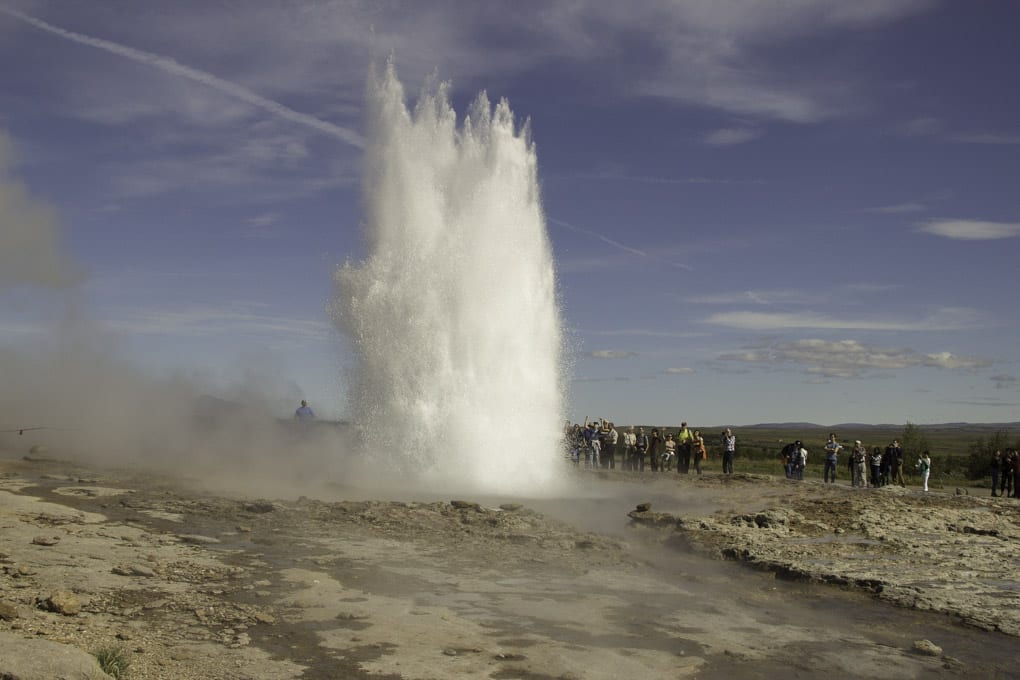 In 1981 the eruption was forced again but this time soap was used to do the job! In the 90s, due to environmental concerns, the soap trick practices less and less but the government authorized for geologists to do it especially for Iceland’s National Day, the 17th of June. 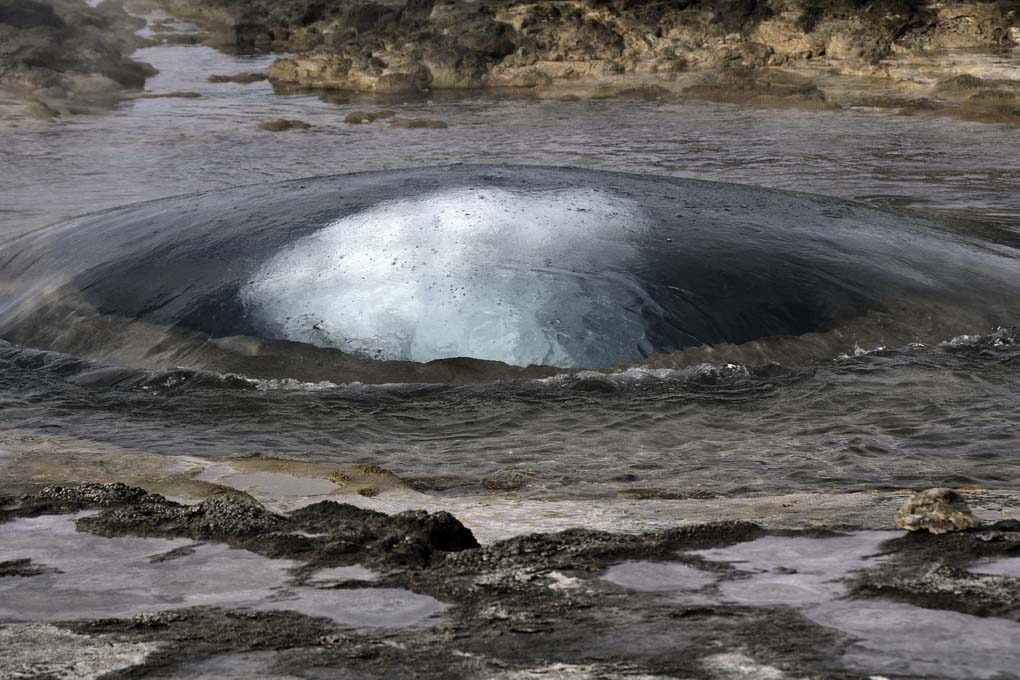 The geyser was greatly affected by an earthquake again in 2000 and the eruptions reached up to 122 meters (400 ft) height and even lasted for two days. This made Geysir one of the highest geysers ever in history.

From 2000 the eruptions were around eight times a day but in July 2003, the activity had decreased down to three times a day. Today Geysir’s activity is very low but who knows when it will decide to erupt again, maybe you’ll get to witness it! 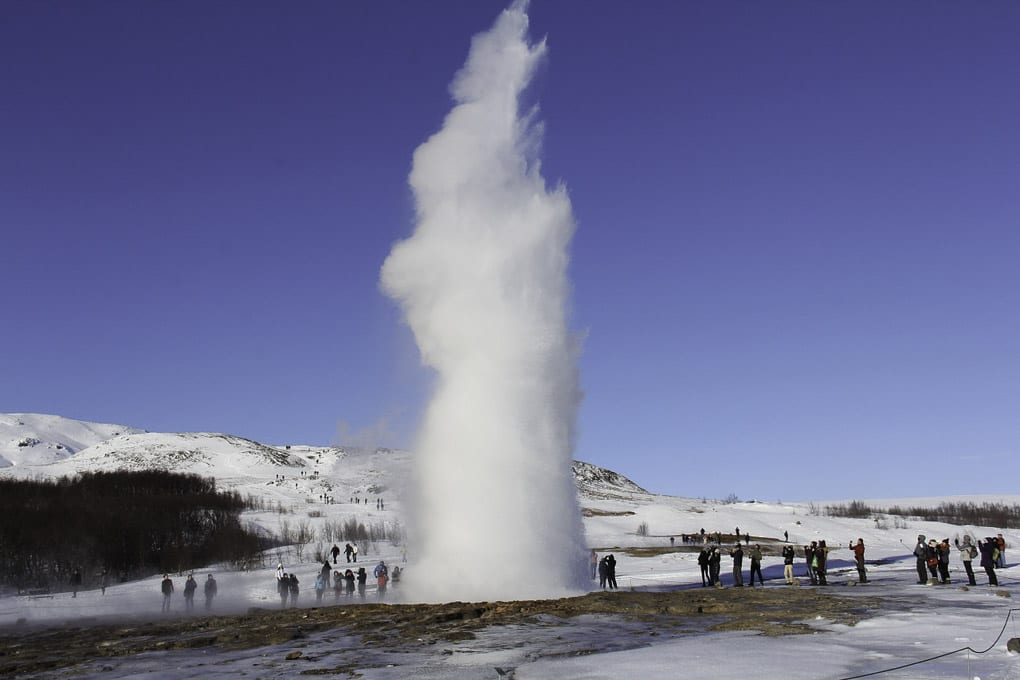 Strokkur and Geysir are believed to be the same age. However, since Geysir was considered to be the more magnificent Strokkur, it wasn’t mentioned in any written books until 1789.

In the 20th century, yet another earthquake clogged the Strokkur conduit again. Since 1963, Strokkur has been erupting rhythmically like a rocket into the Icelandic sky!

The timespan between spouts varies, but most people get a gut feeling just before the moment arrives. So what are the signs you should watch out for? When you see the surface of the pool boiling a little more volatile than usual, then swaying a little, this usually means that an eruption is imminent.

Finally, the surface of the scalding pool will retract back a little – when this happens, Strokkur is well and truly primed for action. Set your camera to sports action mode and get ready to witness one of Mother Nature’s showstoppers!

What Causes a Geyser to Erupt? 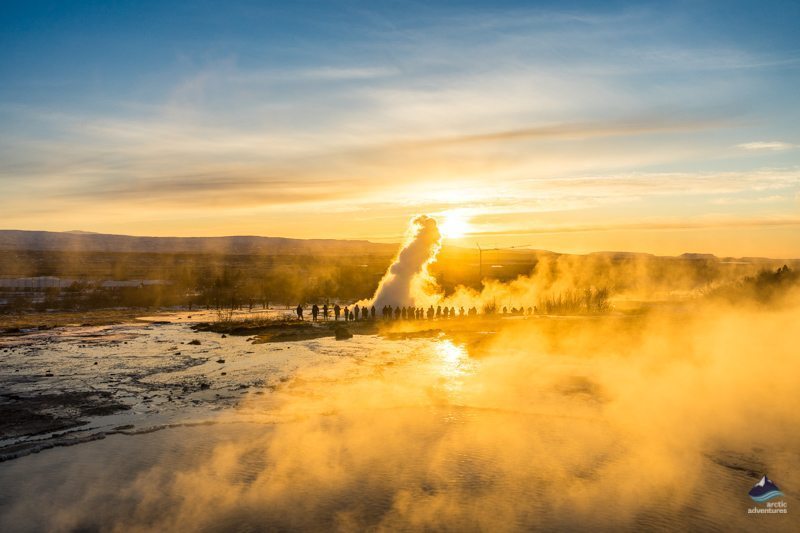 For tourists and locals alike, we’re lucky to have a reliably erupting geyser at a geothermal field so close to Reykjavík. Luckily, it also sits directly inside the hugely popular Golden Circle area.

Where are Geysir and Strokkur Located?

The geysers are one of the attractions of the famous Golden Circle. Situated in the geothermally active valley of Haukadalur in South Iceland 99.2 km (61,6 mi) from Reykjavík if you take the Þingvallavegur route, otherwise around 107 km (66,4 mi).

How to get to Geysir and Strokkur?

The Geysir hot spring area is easily accessible, it is located on road nr. 35 is open almost 365 days out of the year. 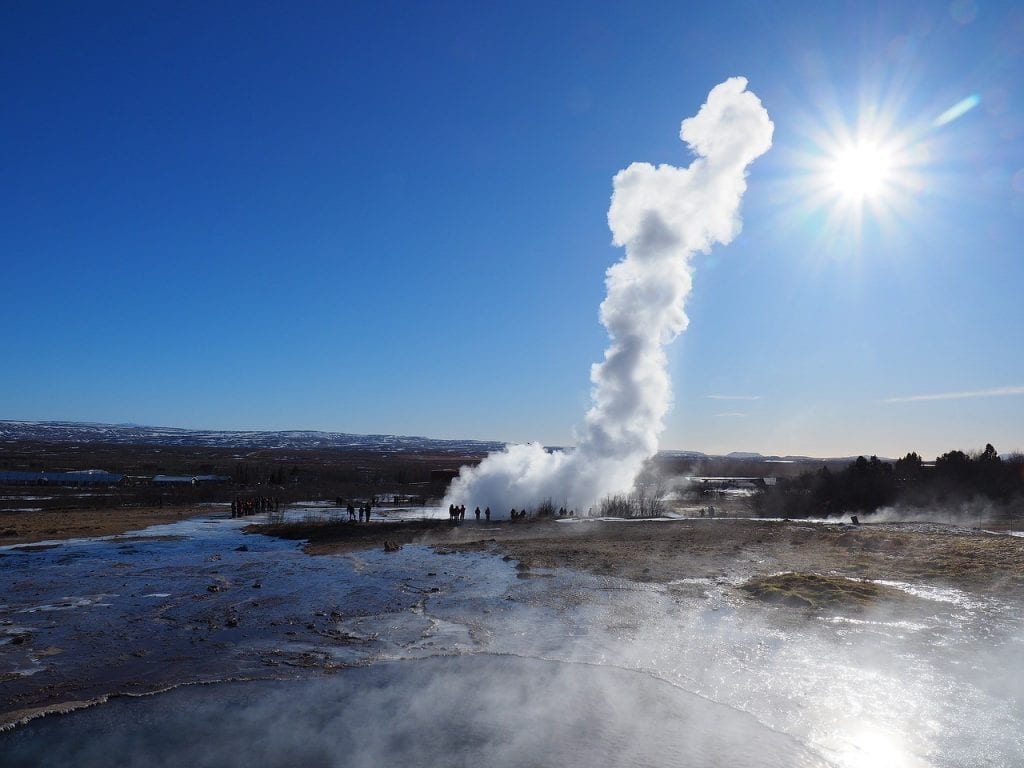 Driving from Reykjavík to Geysir you can take two routes. The more common one is through Mosfellsdalur, past Thingvellir National Park following road number 36. The road soon switched to road 365 and as you pass Lake Laugarvatn it turns to road 37. Continue on this road without any turns.

The second way is via Road 1. It takes you through Hveragerði and right before you reach the town of Selfoss you make a turn left onwards to Lake Laugarvatn. This route will take you past Kerið Volcanic Crater and Faxi waterfall as you follow road 35 there rest of the way.

Other Facilities near the Great Geysir

There are display boards at the entrance to the Geysir Geothermal Area showing information about the geysers and other geothermal activities found in the valley.

Another car park on the same side of the road. This car park is closer to the geysers and is a better option for those with small children, limited mobility or wheelchairs.

Accommodation and Hotels near Geysir and Strokkur

At the Geysir location, just across the street from the mighty geysers, you will find two hotels and a cottage so finding accommodation should not be a problem.

If you wish to stay away from the Geysir area, to possibly find more tranquility and less traffic, we will also mention cabins and other options further away. The top options are the closest ones to Geysir.

Camping near Geysir and Strokkur 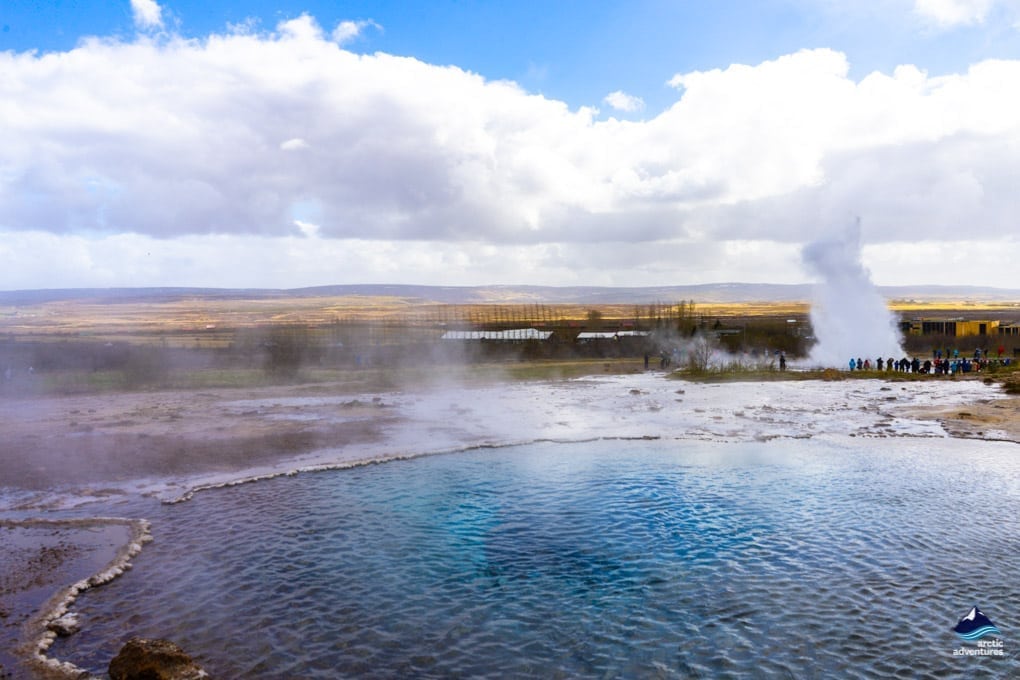 Geysir Camping Ground is located within a walking distance from Geysir. Facilities on-site include showers, toilets access to electricity, washing machines, WIFI, a golf course, and a playground. Open from the 15th of May till the 15th of September.

Skjól Camping Ground is located in between Gullfoss and Geysir.  Their facilities include a restaurant, showers, WCs, WIFI, washing machines, access to electricity, a restaurant, a golf course, walking paths, and wheelchair accessibility. Open all year round.

Faxi Camping Ground is a quiet and beautiful location next to the waterfall Faxi. The facilities include cooking facilities, electricity, WCs, showers, a swimming pool, a restaurant, and walking paths. Open from the 15th of May till the 30th of September.

Úthlíð Camping Ground a charming camping sight near Geysir. Facilities include cooking facilities, WCs, showers, electricity, a golf course, a playground, and a swimming pool. Open from May to September but all year round for campers. 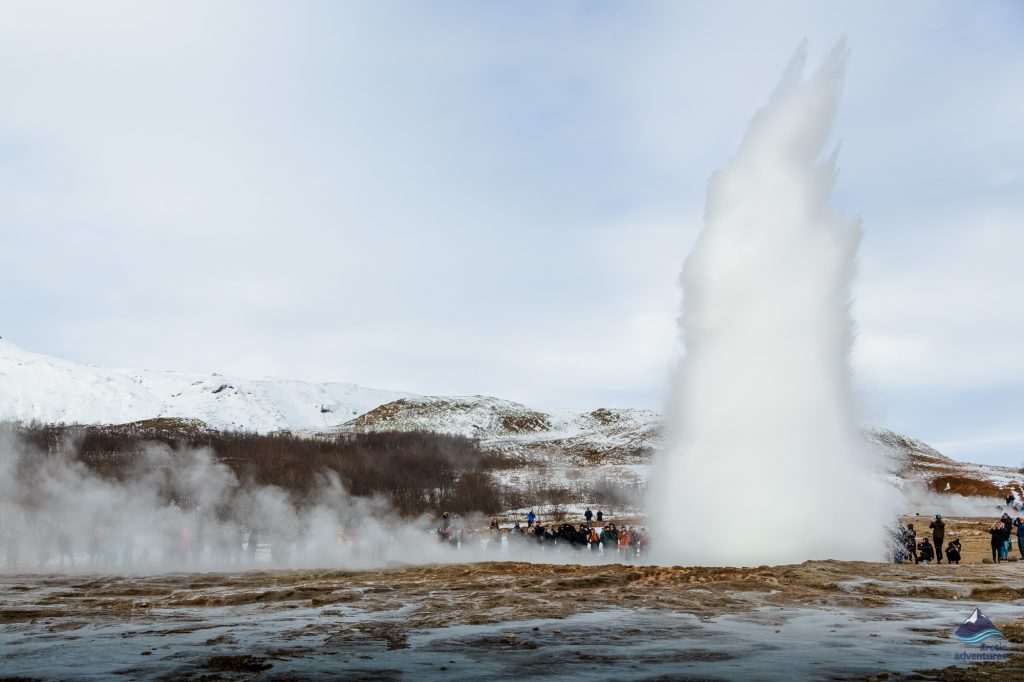 The Geysir area is a fascinating attraction any season, all year round. The steam and smoke that surrounds the area take on the otherwise frosty atmosphere and a true collision of ice and fire takes place.

The ground can get quite slippery so it is important to be mindful of your step. Keep in mind that even when visiting a geothermal area such as this one the temperatures aren’t high so you need to dress according to weather forecasts. Dress smart – layers are key!

Geysir is also a great location to see the winter Northern Lights. If you seek to witness the magical aurora, check out our Golden Circle and Northern Lights tour.

What not to do at Geysir and Strokkur?

Go within the lines! The water is extremely hot and the lines have been put up after accidents have happened. Follow the rules, there is a reason for them.

Go there without visiting Gullfoss, the waterfall is only about 7 min driving distance away. You simply can’t visit the area and skip Gullfoss.

Litter! The area is greatly kept and it’s important that we do what we can to help to keep it that way.

Is Geysir active? When did Geysir last erupt?

Geysir hadn’t erupted since the year 2000 before a suddenly bursting up into the air in February 2016. This shows you that it is still active although not at a frequent level.

Can you bath in Geysir or Strokkur?

No, absolutely not! The temperature is anything from 85°c to 120°c.

Is there a place to eat at Geysir?

There are great restaurant options both at Geysir in Geysisstofa and at Súpa and also at neighboring attractions and farms (Við Faxa, Efstidalur II, Lindin, Friðheimar and Héraðsskólinn Restaurant, and Bistro). For more on what delicacies this area has to offer, see our Best Food on the Golden Circle blog post.

What are the eruption times of Strokkur?

Strokkur erupts every 4-10 minutes, on a rare occasion you might have to wait 15 minutes between eruptions. The force of each burst can though vary quite a lot so you might need to watch a couple to get a high one.