Vatnajökull is not only the biggest glacier in Iceland but in the whole of Europe. It covers over 8100 km2 and has around 30 outlet glaciers. Vatnajökull National Park was founded in 2008 on the foundation of Skaftafell National Park and Jökulsárgljúfur reserve. The National Park is the largest protected area in Europe. Apart from the glacier, the National Park includes some highly regarded natural marvels; huge glacier rivers, stunning canyons, beautiful glacier lagoons and impressive waterfalls.

Iceland was given its name due to the vast amount of ice found covering the land. Still today, there are numerous ice caps to be found all around the country but not a single one gets anywhere close to the voluminous Vatnajökull.

Vatnajökull or “the Water Glacier” as its name would roughly translate to isn’t just by far the biggest glacier in Iceland but also in the whole continent of Europe. The glacier’s average thickness is about 500 meters (1640 ft) but the thickest part is 950 meters (3116,8 ft) almost a whole kilometer! Vatnajokull covers over 8100 km2 and has around 30 outlet glaciers which crawl from the glacier’s core mainly out onto the south shore. These glacier tongues are some of the most exquisite sights you will ever see, with blue crystal ice and volcanic ash layers. 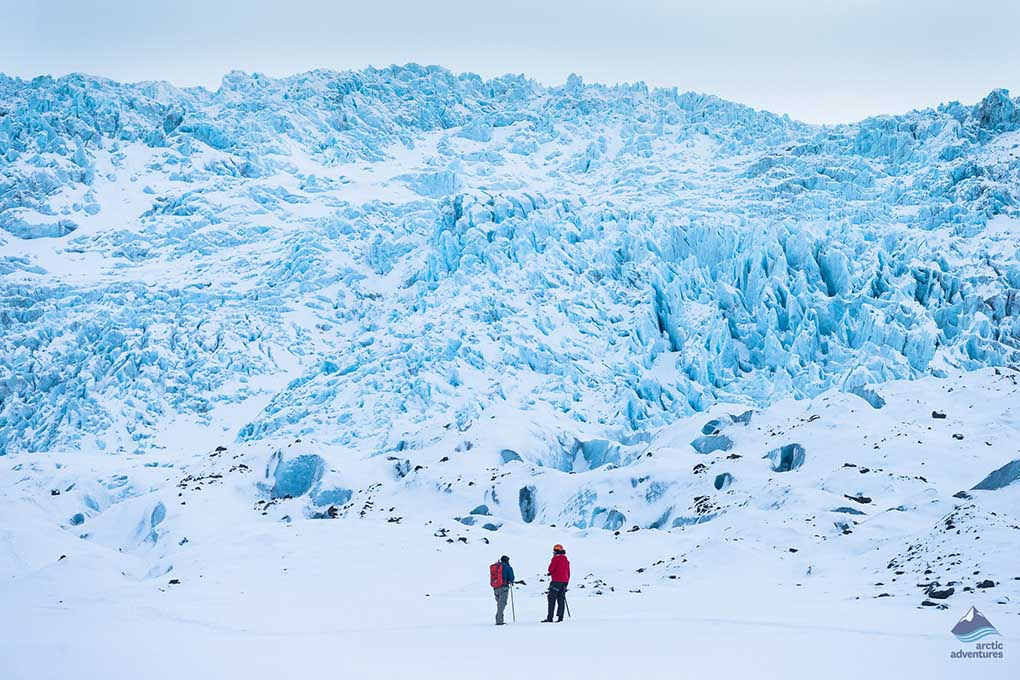 Icelanders are very fond of their glaciers which have decorated their landscaped from settlement and in 2008 the Vatnajökull National park was finally established to protect and serve in the best interest of this magical place. The park was founded around two pre-existing national parks Skaftafell National Park and Jökulsárgljúfur National Park. The new National Park is the largest protected area in Europe and apart from the glaciers, the National Park includes some highly regarded natural marvels; huge glacier rivers, stunning canyons, beautiful glacier lagoons, and impressive waterfalls.

Where is Vatnajökull Located?

This isn’t exactly an easy question to answer, with the ice cap covering 8100 km2 and all, but, we can roughly say that Vatnajökull is located in central to southeastern highlands. Vatnajökull can be seen stretching out down the shore all along the South Coast and adds a real charm to the area.

Vatnajökull National Park reaches all the way up to the North to Ásbyrgi and beyond and all the way down to the flatland in the South. It reaches West almost touching the highland lake Þórisvatn and in the East, it extends into Fljótsdalshreppur where the wild reindeer roam. It is safe to say that the largest National Park in Europe reaches over some of the most fascinating areas in Iceland.

How to get to Vatnajokull Glacier?

Driving from Reykjavík to Vatnajökull is simple. You will drive out of the city on road 1 heading in an easterly direction, going over Hellisheiði heath and onwards down to the town of Hveragerði, through Selfoss and continue following the same road as you did out of Reykjavík until you reach your destination. 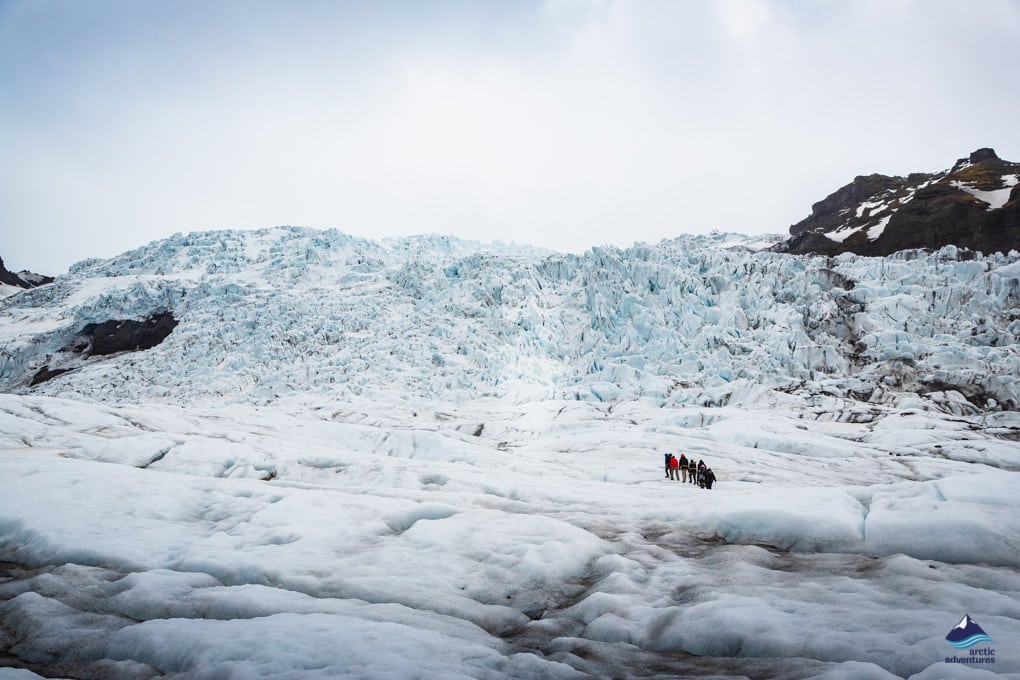 The route couldn’t be easier to track. No twists or turns but plenty of stunning sights and attractions right by the road to stop at and take in the beauty. Some examples would be Seljalandsfoss and Gljúfrabúi waterfalls. The powerful waterfall Skógafoss, the pitch black Reynisfjara Sand Beach and the impeccable Dyrhólaey the cape with the arched hole. Onwards you will cross black sand plains for some time until reached the town of Kirkjubæjarklaustur and at this point, you will start to spot the first sighting of Vatnajökull. Now it is solely up to you where you want to touch the ground with the glacier or which location you are supposed to meet up for a tour. For most, it will be in Skaftafell National Park (4 hours from Reykjavík), at Jökulsárlón (5 hours from Reykjavík) or any of the other glacier lagoons such as Heinabergslón and Fjallsárlón. 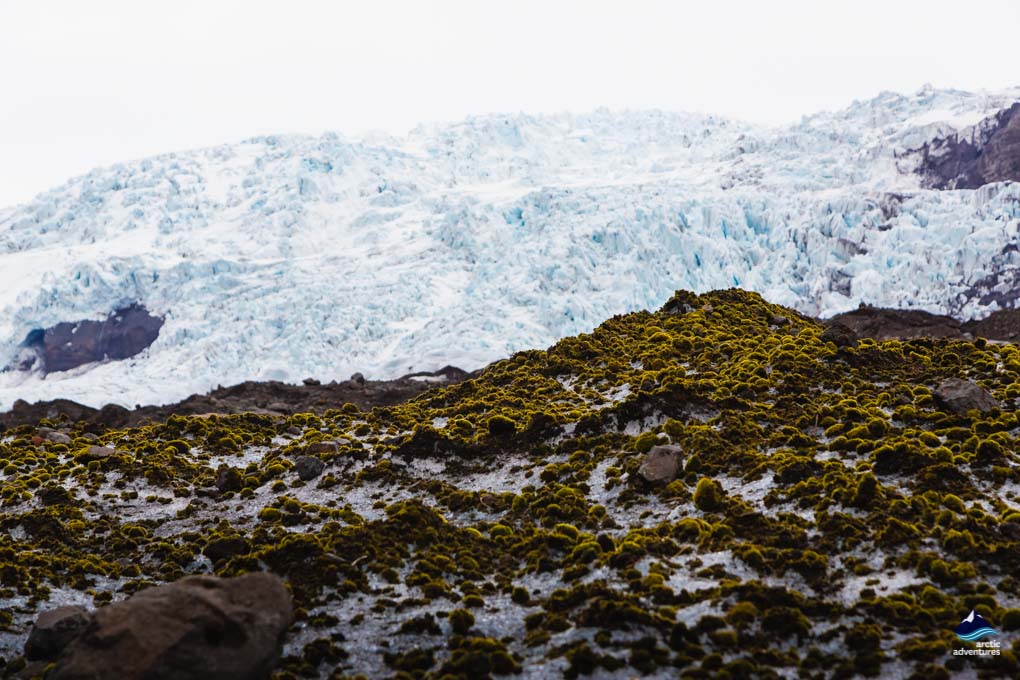 Note: There are a few ways of getting about going close to the glacier but one should not attempt to mount the glacier unless in the company of a guide or an experienced glacier climber. You can easily join one of our multi-day tours that have a glacier experience included, your options being glacier hiking, ice caving or even both.

You can also reach the area to join a meet on location tour by jumping on a public bus and going off at Skaftafell or Jökulsárlón. Chances are you will need to stay the night in the area before the tour as most of them start relatively early.

What to do on Vatnajökull?

Vatnajökull is best accessed and viewed from the south. Here numerous outlet glaciers stretch down from the plateau – Breiðamerkurjökull, Skaftafellsjökull, Virkisjökull, Svínafellsjökull, Falljökull, Skeiðarárjökull to name a few. Öræfajökull is one of the best-known outlets because of its tremendous volcanic eruption in the 18th century. It has become quite popular to hike to the top and because of conditions on the glacier this is only doable in a short period of the year, the top can be really crowded on a sunny day in late April/May. 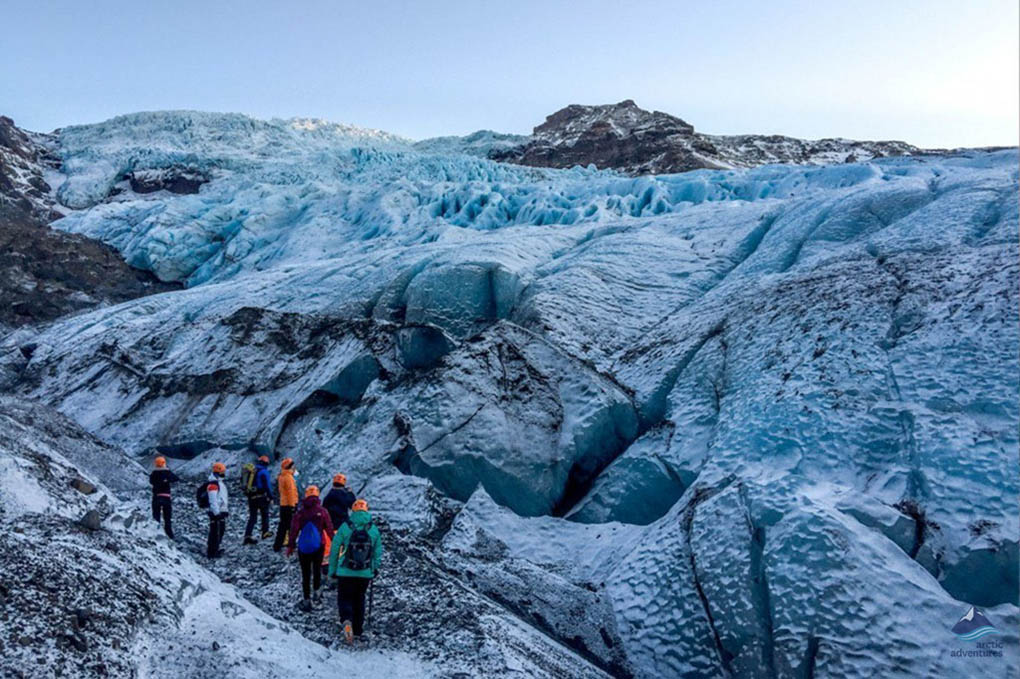 Tour options are endless ranging from short glacier hikes available all year round such as the popular Glacier Wonders tour, to a fantastic glacier hiking and ice caving combination in the winter, such as the Into the Glacier tour. In summer, some like to do a Glacier Lagoon boat ride as an addition to a glacier hiking tour and then the Glacier Grand Slam is the absolute best. 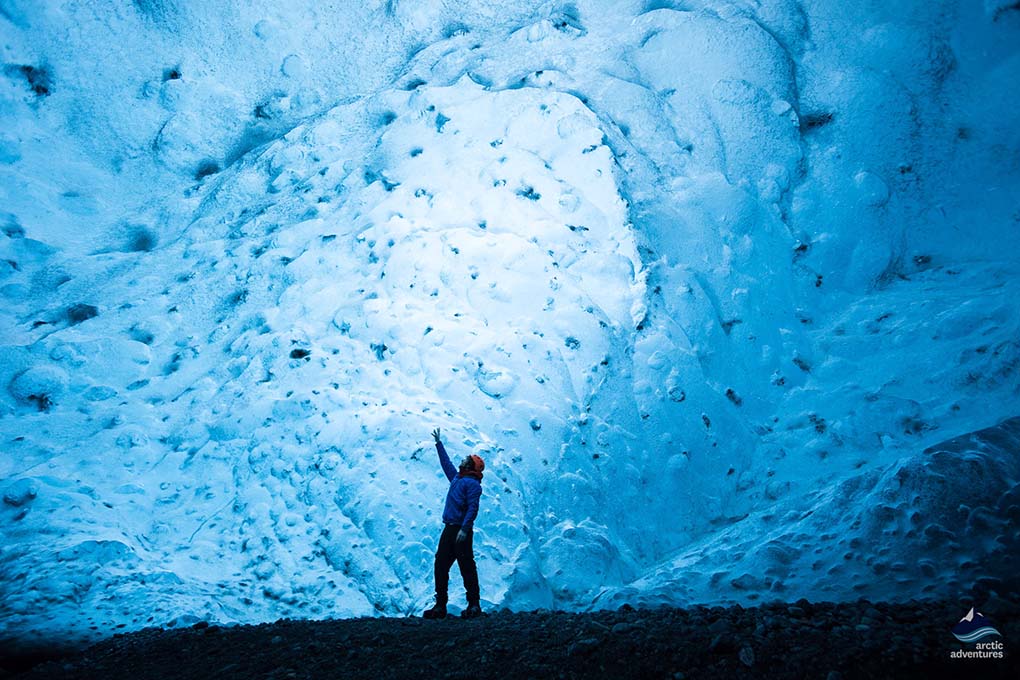 If you are visiting in winter and are simply looking for a blue ice cave tour the Crystal Ice Cave Tour is your winner but if you are looking to really explore the glacier, going further up on a more challenging hike the Glacier Explorer should be your pick and is available all year round! 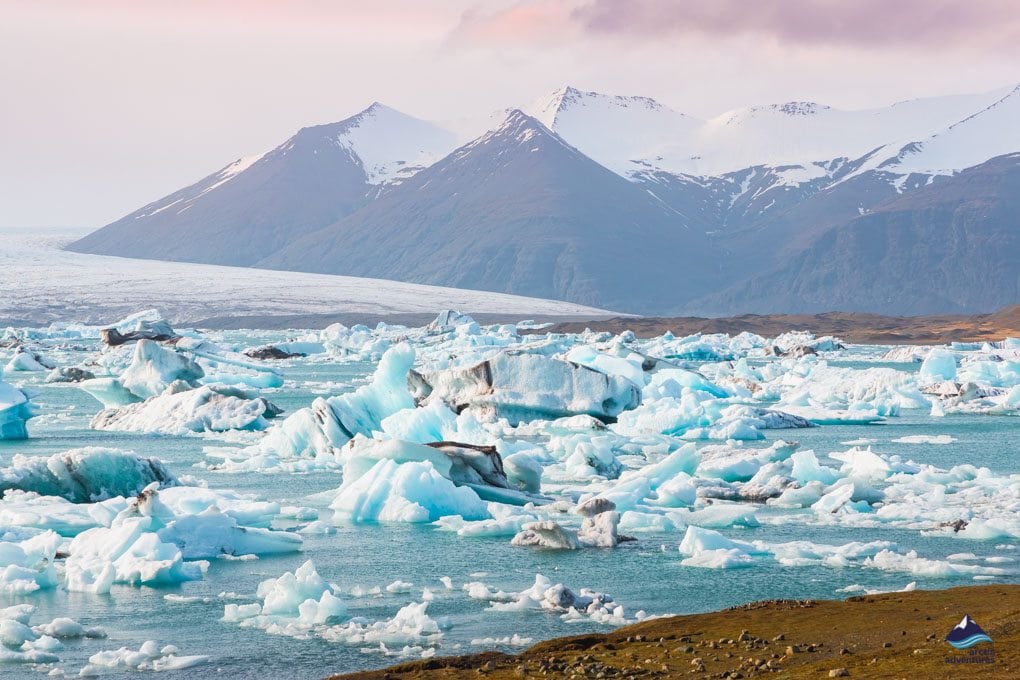 The famous Jökulsárlón glacier lagoon is to be found in the southern part of the glacier and takes its icebergs from the Breiðamerkurjökull outlet glacier. The Icebergs are multicolored and ever changing depending on seasons and oxygen that resides in the blocks and they casually float around in the lagoon, gradually melting into smaller bergs that move over to a pitch black sand beach. There they icebergs float ashore and glisten in the sun giving the beach the name “the Diamond Beach”. The wildlife at the glacier lagoon is very vivid at the lagoon as numerous seals live in the lagoon and birds such as Seagulls, Great Skuas, and Arctic Terns. 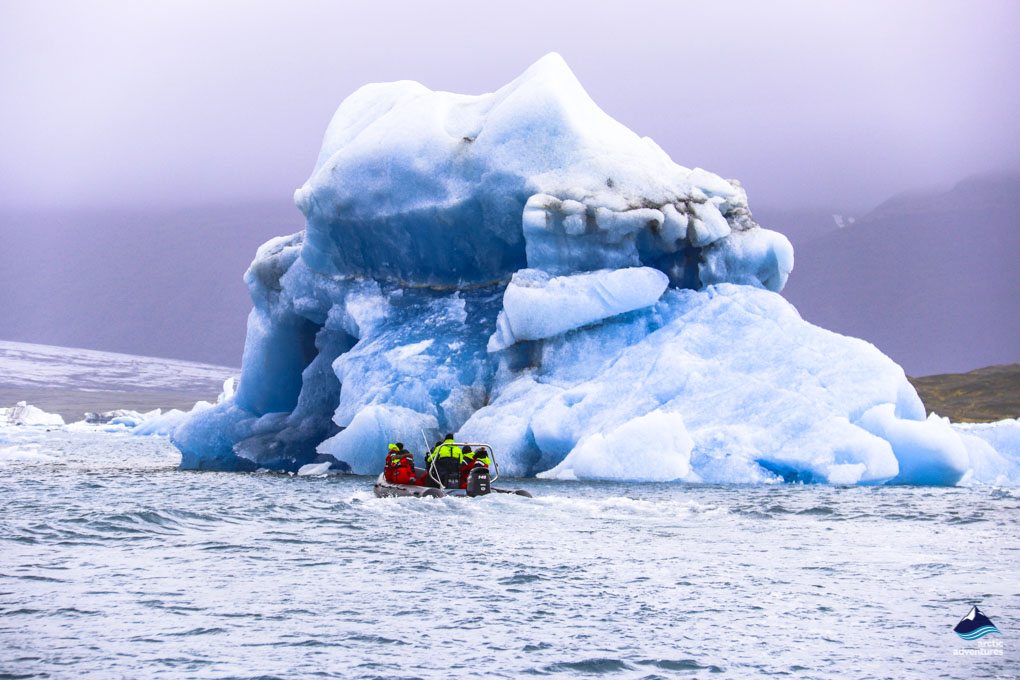 You can explore the lagoon by walking along its shore, or in summer by jumping on one of the boat ride tours available on the lagoon. The boat options are either an Amphibian or a Zodiac but for the most adventurous souls, there is also the glacier lagoon kayaking tour!

Underneath the great ice mass lies two of the most active volcanoes in Iceland; Grímsvötn and Bárðarbunga. Grímsvötn is the most active of the two estimated to have erupted up to one hundred times since the settlements of Iceland. The last eruption in 2011 was relatively small and did not have any serious effects to day to day lives in the vicinity of the glacier.

Where to eat close to Vatnajökull? 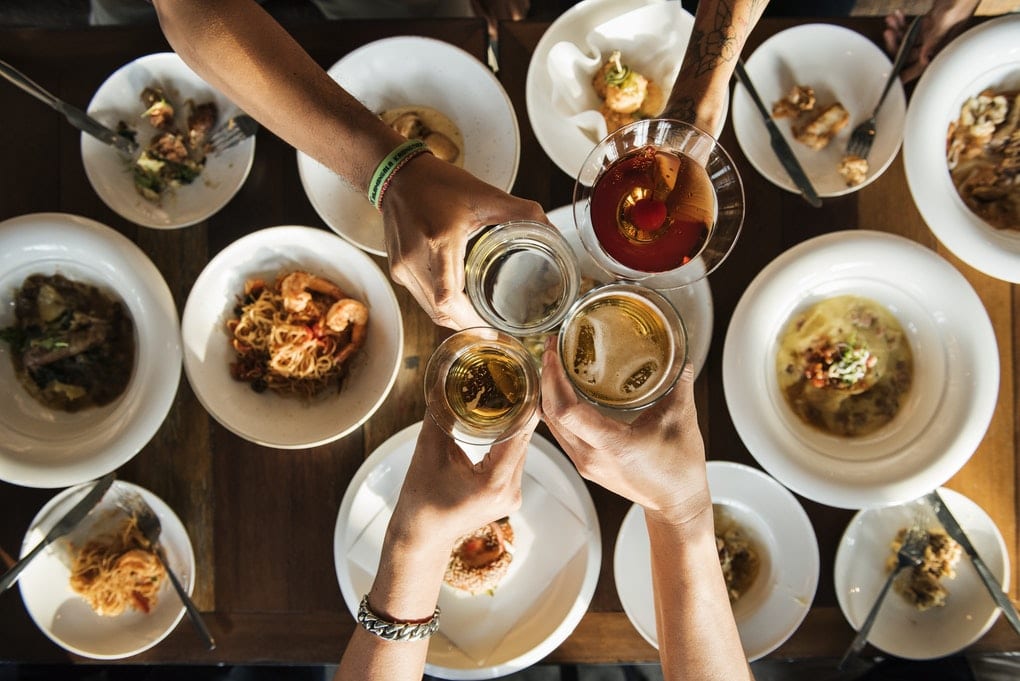 Shown in the order they appear when driving from Reykjavík to Vatnjökull heading East.

Where to stay near Vatnajökull | Accommodations & Hotels by Vatnajökull

Shown in the order they appear when driving from Reykjavík to Vatnjökull heading East.

Note: None of the accommodations listed here are in the town Höfn in Hornafjörður. That is not to say that Höfn isn’t a fantastic place. There are bountiful great options in Höfn but the list would just get too long.

Here is a list of all the fantastic camping sites near Vatnajökull glacier sure to provide you with a great camping experience and memorable views!

With crampons on foot and ice axe in hand, get intimate with the ancient ice formations of Europe's largest glacier!

Hiking and ice caving adventure on Breiðamerkurjökull glacier, an outlet glacier of Vatnajökull, the largest glacier in Europe. This tour offers a challenging 1-1.5 hour hike on the glacier.

This exhilarating glacier super jeep tour will take you into the pristine wilderness of Vatnajökull, the largest glacier in Europe 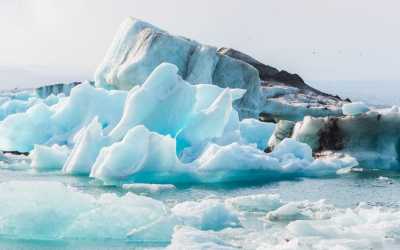 Travel the country from the west to the east, discover raw rural landscapes of Iceland with lava deserts and leftover moraine, hike on a glacier, and marvel at the biggest hot spring in Europe on this 4-day unforgettable adventure. 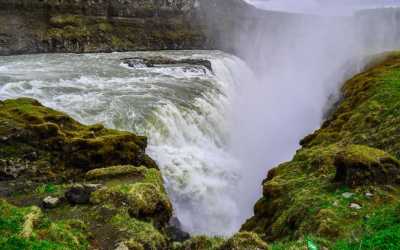 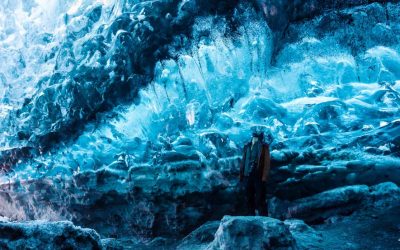 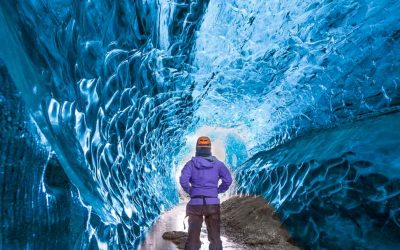 This is a unique way to explore the wonders of Vatnajökull glacier, Europe's largest glacier.

Kayaking on Jökulsarlon Glacier Lagoon is a great way to experience the famous Vatnajökull National Park. Our Jökulsarlon kayak tour will give you a panoramic and unforgettable view of the stunning landscape surrounding the lagoon.