The Justin Bieber Canyon in Iceland

Fjadrargljufur is a stunning and magical canyon close to Kirkjubæjarklaustur in the South East of Iceland. Fjaðrárgljúfur Canyon is best known as the location of Justin Bieber’s video “I’ll Show you.” Enjoy stupendous views and tumbling waterfalls with a visit to Fjadrargljufur!

Fjaðrárgljúfur is a 2 km (1.24 mi) long canyon in the South-East Region of Iceland. The canyon is about 100 meters deep and through it runs a small freshwater stream.

It’s known to be one of the most picturesque places in Iceland. It’s quickly become one of the most sought-after locations, especially after appearing Justin Bieber’s video “I’ll Show You.”

The Fjaðrárgjúfur Canyon was formed during the last ice age when a glacial river carved its way through soil, creating a massive canyon about 100 meters down. Even though the canyon was created at a cold period, today it’s a very fertile place with beautiful vegetation.

The fairytale-like Fjaðrárgljúfur has steep tuff walls on both sides. They are believed to be about 2 million years old. The Fjaðrá River runs like a snake in between the palagonite walls and originates in the Geirlandshraun lava field. It also falls from a cliff into the Fjaðrárgljúfur Canyon, creating quite the scene. The river then joined the powerful Skaftá river.

Fjaðrárgljúfur is believed to have formed at the end of the last ice age, or about 9 thousand years ago. When the glacier retreated, a lagoon formed in the valley behind the canyon. 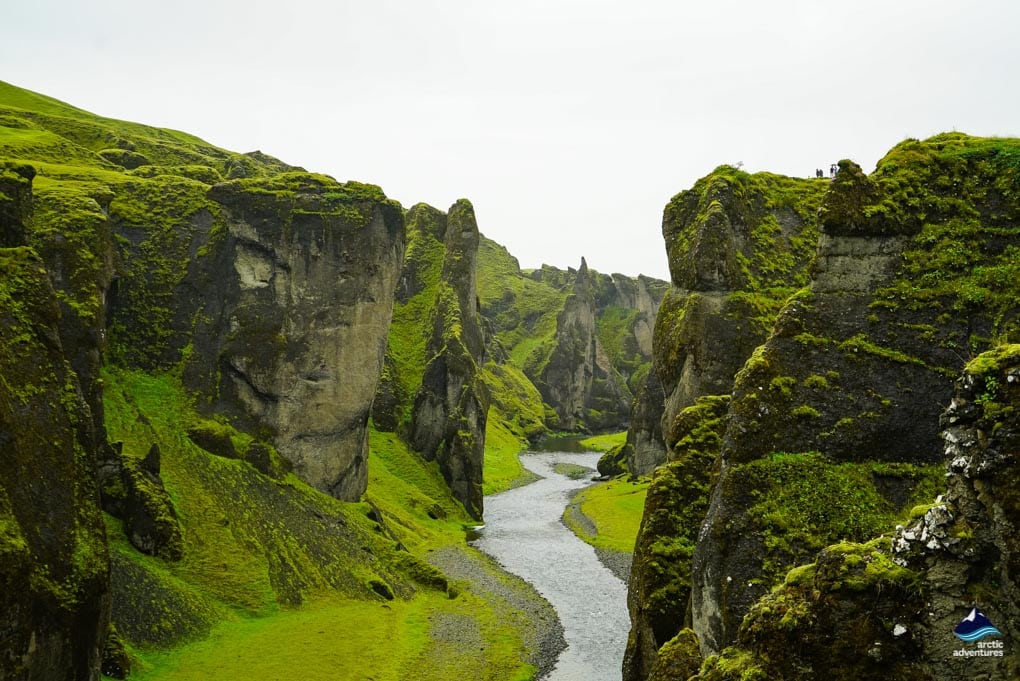 Drainage water from the lagoon then ran its course over the area. The glacier river carried with it rocks and other natural materials that carved into the landscape.

When the power of the stream was at its highest it started to dig itself into the sedimentary land. After some time a canyon had formed. This is the canyon we now know as Fjaðrárgljúfur.

Where is Fjaðrárgljúfur located?

Fjaðrárgljúfur is located in Skaftárhreppur County in the southeastern region of Iceland.

The distance between Reykjavík and Fjaðrárgljúfur is about 248 kilometers (154.1 mi) and the drive takes about 3 hours and 10 minutes (without stops).

Fjaðrárgljúfur is very close to Kirkjubæjarklaustur (only about 11.9 km [7.39 mi]) and about 20 minutes of driving.

How to get to Fjaðrárgljúfur? 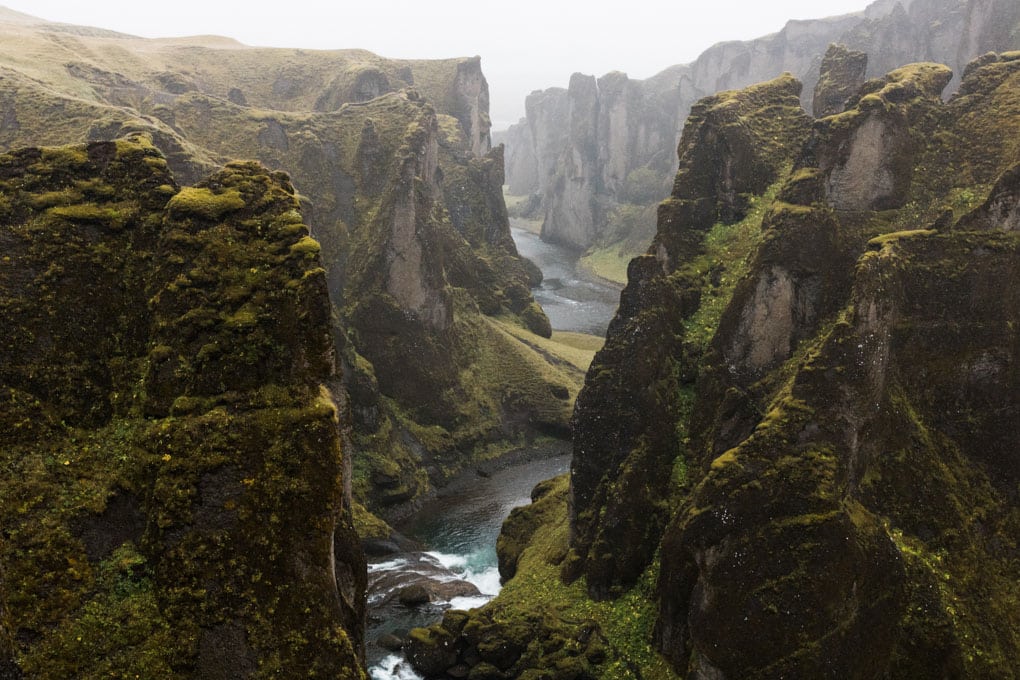 The turn to Fjaðrárgljúfur is right off Ring Road 1 and 20 minutes before reaching Kirkjubæjarklaustur if you are driving the Ring Road counterclockwise.

Look for a sign pointing to Road Nr. 206 called Holtsvegur. There you will drive for about 3 km (1.86 mi) before finding the parking lot.

Accommodation and hotels near Fjadrargljufur

There are plenty of wonderful places to stay around the picturesque canyon Fjaðrárgljúfur. Here we will name a few: 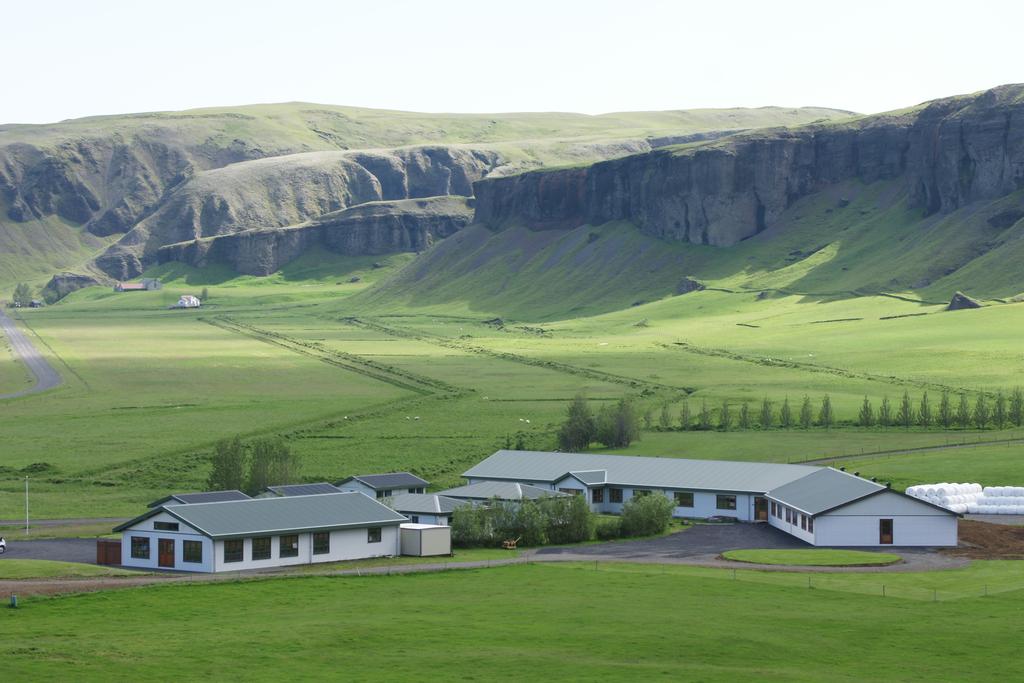 Cottages and Cabins near Fjadrargljufur

The hiking paths at Fjadrargljufur 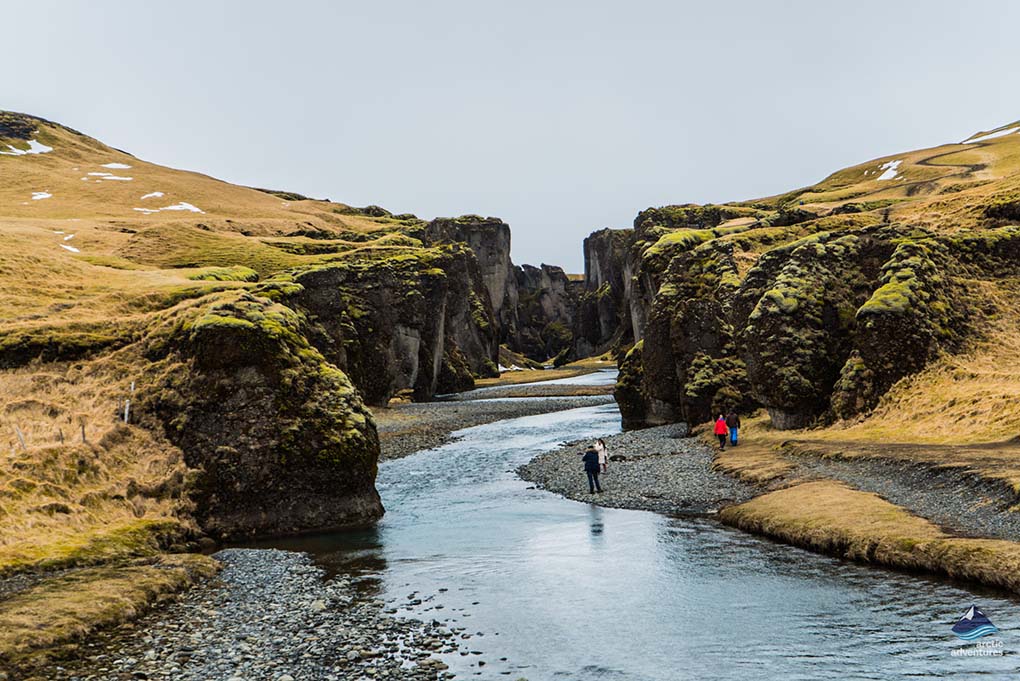 The water levels are usually not high in Fjaðrá river which runs through the canyon. Due to this reason, hikers can safely walk inside the canyon.

They might still need to wade the river a few times so it’s best to be prepared, have sandals or wade shoes with you.

The walk is a bit adventurous but the deeper you go the more beautiful the canyon gets. The view from the deepest part is without comparison. Please note that this hike is not recommended in wintertime!

Most visitors prefer the path that doesn’t require any wading. It takes you to the edge of the canyon where you can now stand on a viewing platform and see the stunning vista over the whole area. Please don’t leave the marked path and don’t enter the restricted areas for posing for photos!

If you have time, we recommend doing both A and B! 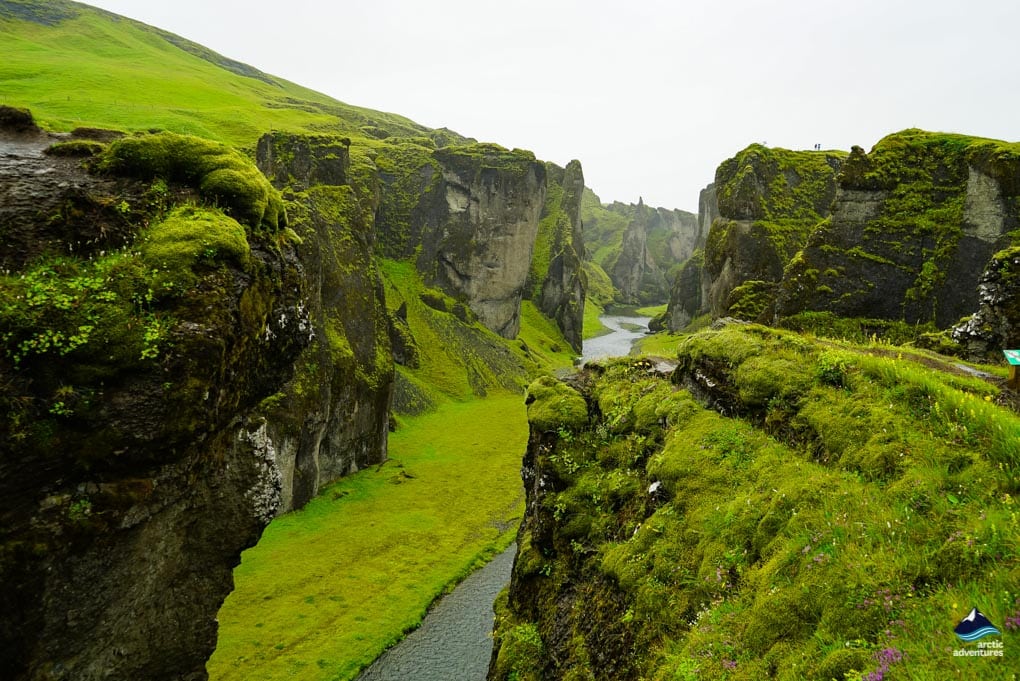 Fjaðrárgljúfur Canyon is a relatively safe place, especially on an Icelandic standard. Still, like when visiting all new places, it is best to be prepared. Keep this in mind:

During spring and autumn, however, the area gets extremely wet due to intense melting and precipitation. The paths often get muddy and slippery, which makes visitors leave the marked trail to avoid getting dirty.

Leaving the marked path can be very dangerous when you visit a thrilling canyon. Also, when tens or hundreds of people start to step off the path, they together cause serious damage to the vegetation, treading the grass and moss down, killing the fragile flora, and creating even bigger mud pots.

Fjaðrárgljúfur was closed in April 2018 for the first time ever. This was done by The Icelandic Environment Agency to protect the vegetation and to ensure the safety of visitors. The damage of the area around Fjaðrárgljúfur was extensive and was mainly caused by visitors going off the marked paths and not following the signs.

Sadly, this issue keeps coming up over and over. The canyon had to be closed several times during the last seasons. Please respect any closure in Iceland and never step off the marked paths, not even for just one photo!

Note that many of the areas Justin is seen strutting around in the video are now off-limits for travelers. We urge you to follow the rules and signs. They are there for a reason to protect you and nature!

Do not climb over the ropes. Do not stand out on the edges of the cliffs where no viewpoint has been built. Never step on the moss, even if other people did so before you. Do not follow the detours started by others.

The Icelandic Environment Agency is constantly trying to restore the vegetation on which people have left their footprints and the process can take decades. 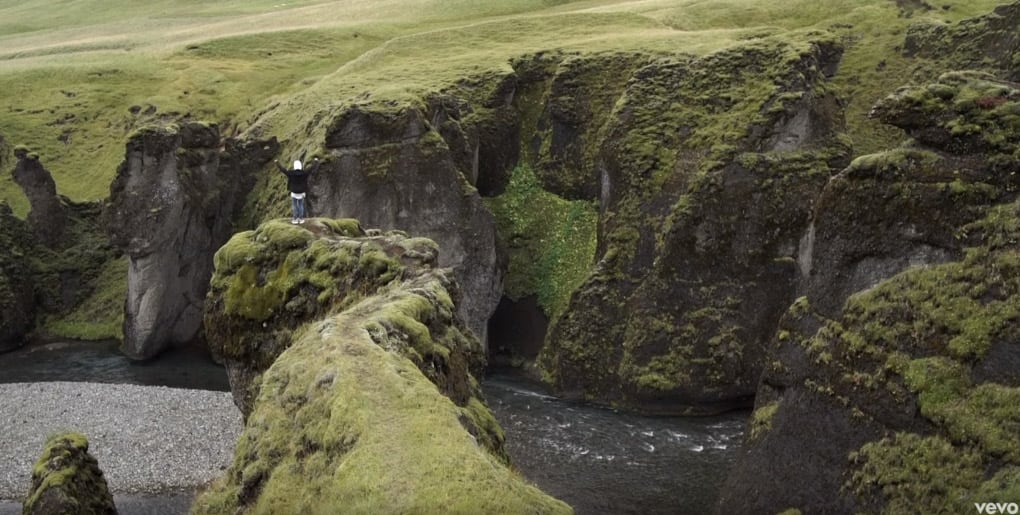 At the beginning of Justin Bieber’s Video I’ll Show you, Bieber is seen walking on a cliff overlooking the Fjaðrárgljúfur Canyon.

The video’s attention is again on Fjaðrárgljúfur at 1:09 when the camera shows an overview of the empty canyon before showing Bieber himself bathing in the water wearing nothing but undies. 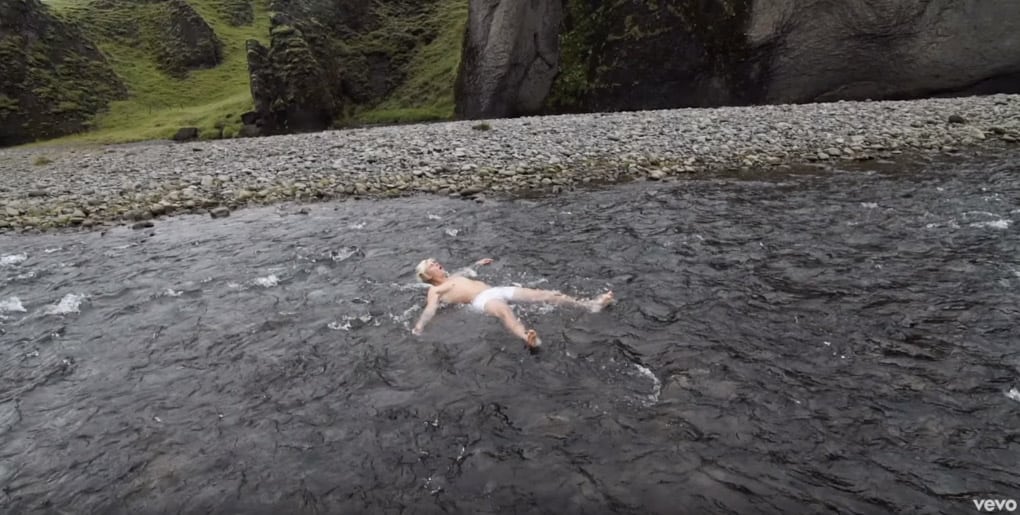 After the video went viral Fjaðrárgljúfur canyon, which before that time was mostly unknown to even the locals, became a sensation! The location is now listed as a must-do in the South East area and the visitors just keep coming. 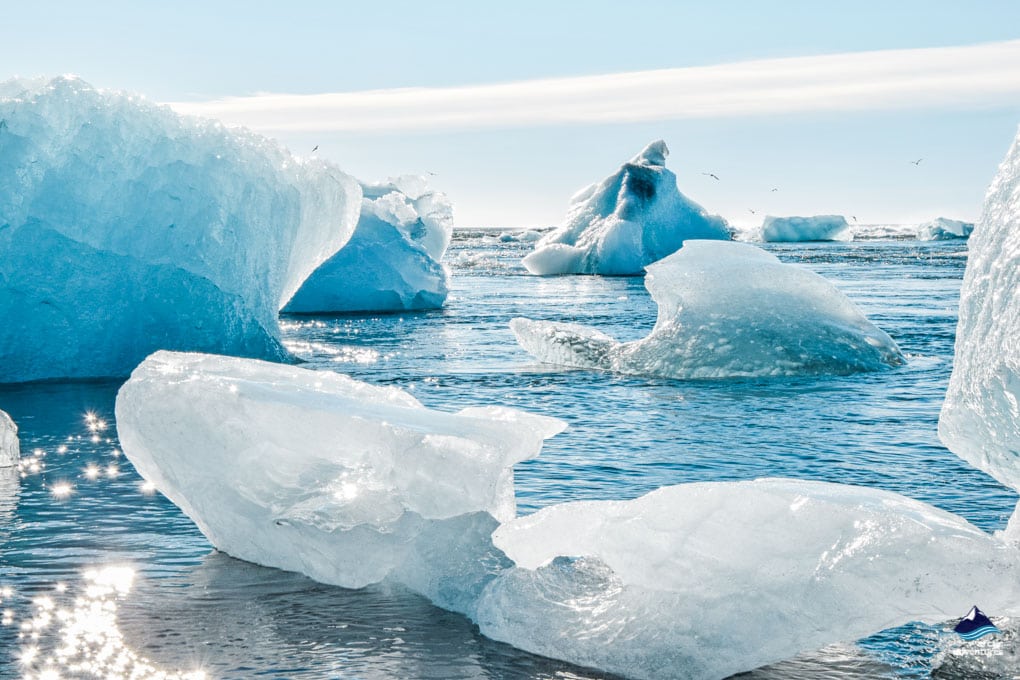 Other locations in the video include Skógafoss Waterfall, Dyrhólaey Cliff overlooking Sólheimasandur, the Airplane Wreck on Sólheimasandur, Ring Road 1, Jökulsárlón Glacier Lagoon and the Diamond Beach. 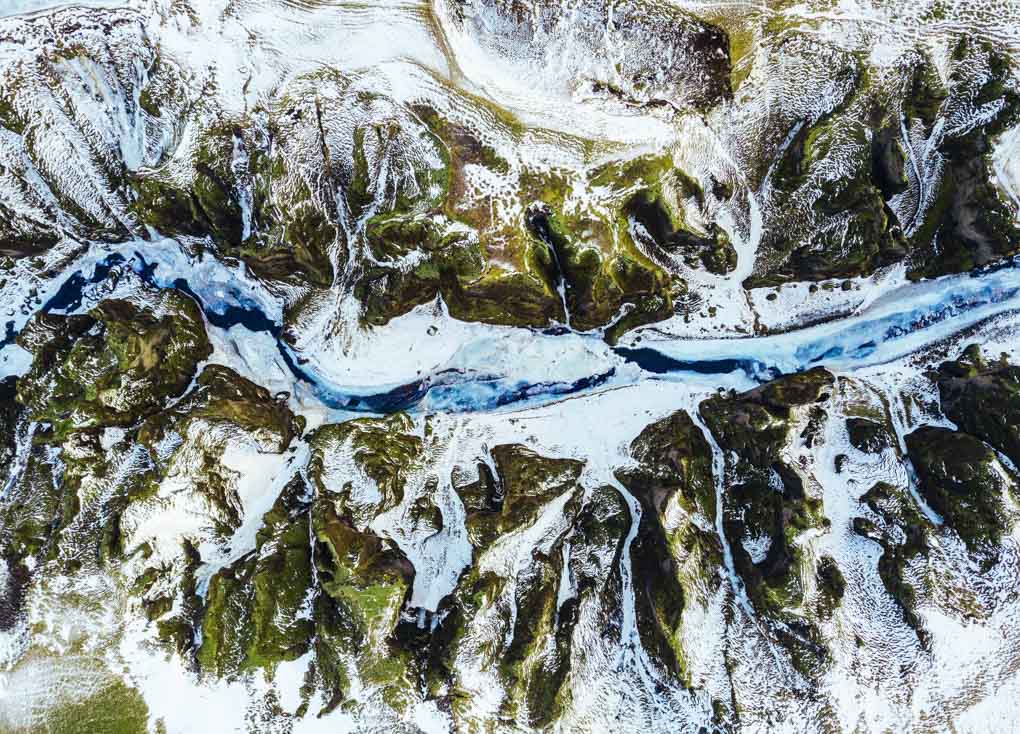 Fjaðrárgljufur is absolutely gorgeous in winter but often ill-passible. The road leading up to it will often be closed off due to heavy snowfall. Trying to get past will only get your vehicle stuck so please do be respectful of signs such as this one.

But if the road is open you are truly in for a treat. The stream will continue running but the hills get all snowy and the place truly looks like something out of a Lord of the Rings scene.

If you are looking for information about the road leading up to Fjaðrárgljúfur you can always check out www.road.is and look for road number F206.

Tours that visit the Fjaðrárgljúfur Canyon