Walk Behind a Waterfall in Iceland

Seljalandsfoss Waterfall is a beautiful waterfall located in the South Coast of Iceland. This spectacular natural wonder drops around 60 meters into a tranquil pool below. Walk behind the waterfall to view it from a complete 360° angle!

Seljalandsfoss Waterfall will likely be one of the first things you hear about when it comes to Iceland. The waterfalls of Iceland have truly made a name for themselves all around the world but Seljalandsfoss waterfall stands at the top.

When visiting you should be prepared to get a little wet because Seljalandsfoss is one of few places in the world where it’s possible to walk behind a waterfall.

Following the pathway from the base of the cliff will take you behind the vigorously tumbling waterfall. We recommend you take your time and make the most of an opportunity to take some totally unique photographs.

Seljalandsfoss is on the Seljalands River, which flows all the way down from the famous stratovolcano, Eyjafjallajökull!

Seljalandsfoss has been one of Iceland’s most famous landmarks since travelers started visiting the country. It’s hard to miss since the waterfall is located right off the Ring Road One. It can easily be visited on a day tour out from Reykjavík and you can find other interesting attractions nearby.

The road to Seljalandsfoss is the same road that leads you to Þórsmörk, the Valley of Thor and the waterfall can be visited throughout the year.

A great day tour along the south coast of Iceland where waterfalls, black sand beach and magnificent landscape play the main role.

Explore Iceland’s South Coast, step into the depths of Europe’s largest glacier, count diamonds on a glacier lagoon, and ride a snowmobile on Langjokull.

Where does Seljalandsfoss originate?

The water that flows through Seljalandsfoss is glacial water and originates in Eyjafjallajökull glacier. Eyjafjallajökull became famous in 2010 when the stratovolcano suddenly erupted and caused all air traffic in Europe to completely shut down for about 5 days.

This eruption really put Iceland on the map as a travel destination and the glacier volcano and anything that goes with it as well. Eyjafjallajökull – which rests above the waterfall and the Eyjafjöll mountains – feeds its meltwater to the river Seljalandsá.

The river then runs down the slopes and drops vertically into the Seljalandsheiði Heath. This creates the stunning waterfall as it is today.

Where is Seljalandsfoss located? 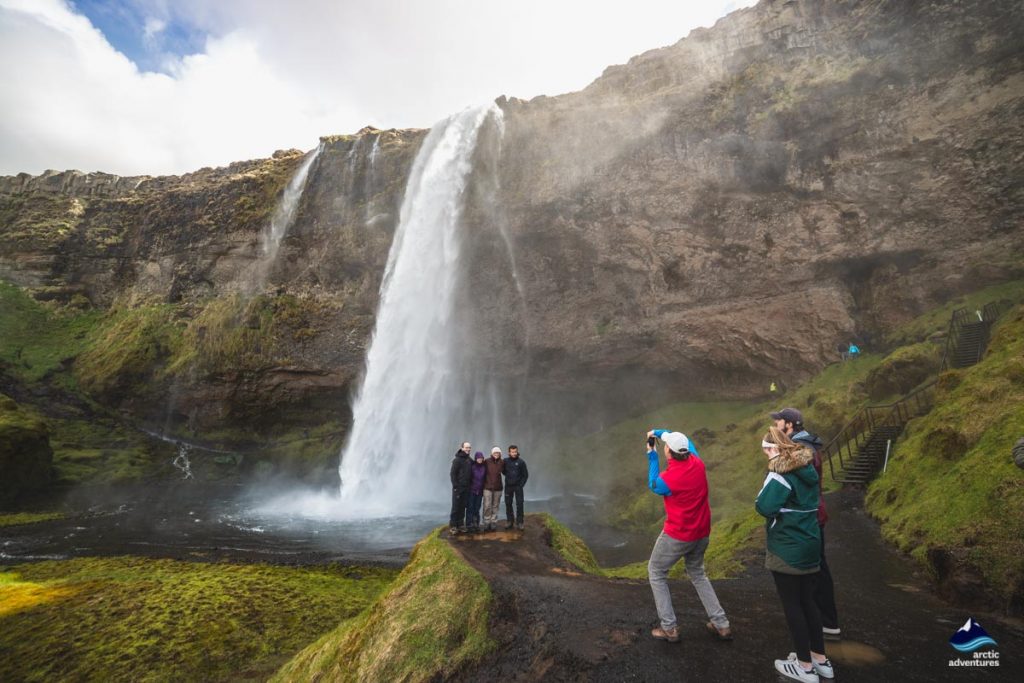 Seljalandsfoss waterfall is located on the South Coast, about 120 km (74,5 mi) from Reykjavík. For those traveling from an easterly direction, the distances are 60 km (37 mi) from Vík and 29.2 km (18 mi) from Skógafoss waterfall.

How to get to Seljalandsfoss

Driving from Reykjavík to Seljalandsfoss you are going to want to take the Road 1 that leads you through the towns Selfoss, Hella, and Hvolsvöllur. After having passed Hvolsvöllur you continue East for about 18 minutes before seeing a sign which tells you where to turn to get on road 249 which takes you to Seljalandsfoss. The road is the same as the one that leads you to Gljúfrabúi waterfall and later Þórsmörk valley.

Driving from Vík/East to Seljalandsfoss you drive the Road 1 straight past Jökulsárlón Glacier Lagoon, through Kirkjubæjarklaustur and the town Vík. When you are at Vík you have about  50 minutes left before you reach Seljalandsfoss. Just continue straight on Road 1 until you see the sign to Þórsmerkurvegur, road number 249 leading you to Seljalandsfoss, Gljúfrabúi and eventually Þórsmörk Valley.

Small Group Guided Tours in the South Coast of Iceland

Map of the Seljalandsfoss Area

In winter the area around Seljalandsfoss looks nothing short of a winter wonderland. The icicles hang from the cliffs and the frozen ground around the falls is covered with snow and ice. The scenery looks amazing and the waterfall is photogenic, to say the least.

But winter around Seljalandsfoss also has its faults, the icing on the paths and around can be hazardous and it is important to be on the lookout while exploring the area on foot. Wear good sturdy shoes, preferably with spikes, this is necessary for a safe visit!

If the path behind the waterfall gets too icy and slippery it will be closed.  Please respect the closure and don’t try to go past the fence, it is put up for your own safety!

In winter the waterfall is lit up with two enormous light beams and the visual is spectacular. It is truly worth a drive past and could be the perfect add-on to a night of Northern Lights hunting.

Hotels and Accommodation near Seljalandsfoss

There are quite a few locations you can stay at near Seljalandsfoss but to cut the counting at someplace we will narrow our choices down to about 30 km.

There are so many different ways to stay the night near Seljalandsfoss but during summertime, camping is an excellent choice of accommodation. The camping ground is called Hamragarðar and is only about 2 minutes away from Seljalandsfoss itself, right in front of Gljúfrabúi waterfall.

It is well equipped with stoves, counters for food preparations, dishwashing stations, tables, laundry rooms, bathrooms, showers, a small information center where you can buy some snacks.

In the year 2017 parking fees were introduced at Seljalandsfoss as costs of maintaining the property were piling up with no source of income to pay for the repairments.

Many don’t know this but Seljaland is actually the name of the farm which the waterfall’s land belongs to and the farmer lead the committee that made the final decision.

Together with the landowners and the local municipal authority now charge for the parking to raise money for the maintenance of the facilities on-site, walking paths, public restrooms, etc.

The fee is 800 ISK and the ticket is valid for the whole day.

Seljalandsfoss has played a starring role in music videos and tv shows as the waterfall’s setting and uniqueness shines out in any clip. Here are examples of filming at Seljalandsfoss.

Other Waterfalls Near Seljalandsfoss 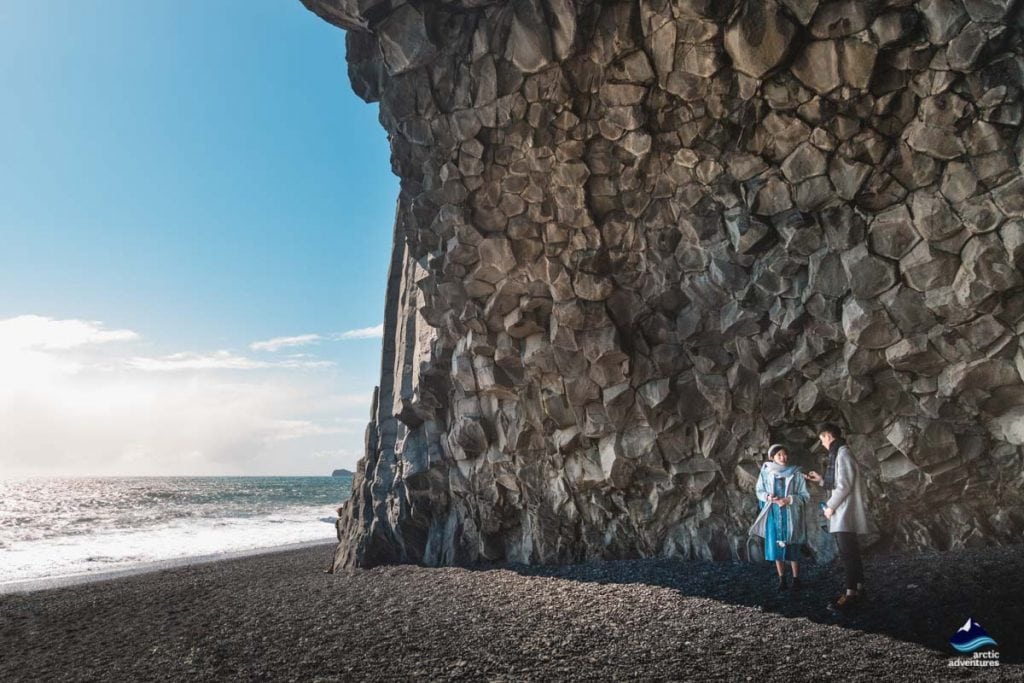 How far is Seljalandsfoss from Reykjavik?

From Reykjavik to Seljalandsfoss, it’s around 128 km, which should take you less than 2 hours in a car.

Can you walk behind Seljalandsfoss?

In summer, yes! Prepare to get wet and bring your rain gear!

Is the path behind Seljalandsfoss closed during winter?

Most likely, yes. When the temperature of the air falls below the freezing point, the path gets very slippery and giant icicles can fall onto the path. In these unsafe conditions, the path leading behind the cascade will be closed. Expect the path to be closed any time between late October and late April.