June in Iceland | All you need to know

June is a great month to visit Iceland. Why you might ask? Well, for many different reasons.

There are so many things to do in Iceland during this month that you can’t get bored. From the Icelandic National Day to the biggest outdoor music festival of the year, everything is here to enjoy the perfect holidays. Between pleasant temperatures, longer days and nice weather, June is definitely a great month to visit Iceland. Don’t hesitate and book your flight ticket for June!

Good to know before visiting Iceland in June

Weather in Iceland in June

June is the first official summer month followed by July and August. This means that temperatures are beginning to get higher, and sunny days are coming. Indeed, June is one of the warmest months of the year and has the least rain. During this period, Reykjavík has an average temperature of 9°C (48°F). If you are lucky, the temperatures can go up to 15°C (59°F)! In June, Icelanders will dress like it is 30°C (86°F) just because it is officially summer, even if the temperatures are not that high for other people.

Now you are probably wondering what kind of clothing you should put in your suitcase, am I right? Dressing in layers is always the solution. You can bring shorts if you are not really sensitive to the cold, but don’t forget to bring some pants as the wind can be chilly. I would suggest packing thermal underwear if you are planning on exploring and doing some outdoor activities. A wool sweater and a good jacket are also a must, as well as good hiking shoes. Note that June marks the ultimate switch to a Summer Hiking season! Also, check out the Iceland weather forecast for the whole year.

About the midnight sun

The midnight sun is a natural phenomenon occurring every year before and after the Summer Solstice. The Icelandic Summer Solstice takes place between the 20th and the 22nd of June depending on the year. This is known to be the longest day of the entire year. The Summer Solstice is celebrated each year under a bright sky at midnight. Icelanders love to celebrate this moment as they waited so long for the days to increase throughout the long winter. As you can guess, Reykjavík’s nightlife is awesome during this time of the year. It is also possible to observe this phenomenon in June and July, with not less than 18 hours of daylight.

This period of the year is a great opportunity to explore Iceland without any time limit. This allows you to discover the wonderful landscapes during night with fewer people around. Some day tours are longer for this special occasion.

As the daylight is omnipresent, it is not possible to see the Northern lights in June. However, the midnight sun is not less spectacular! It is a once in a lifetime event that you should definitely experience.

Best things to do around Reykjavik in June

Amazing Tours to join in June

There are so many things to do in June in Iceland. The day tours are longer as the sun is always up! For the special occasion of the midnight sun, ATV companies are doing midnight sun excursions! What a great experience to drive those fast and fierce engines and have the incredible lights of the sun at midnight! For those who prefer more tranquil outdoor activities: trade the ATV for a sweet Icelandic horse. Horse riding is definitely worth it! Ride the friendliest horses on Earth as they will lead you through the picturesque lava fields and along the mountains.

In June, many of the Highlands roads open again after the harsh winter (the exact date varies each year). This means that various day tours that take place in remote places will be available again! You can finally access to the beautiful region of Landmannalaugar with a Super Jeep. Landmannalaugar is located near the Hekla volcano, the most famous active volcano and its lava field will make you feel like you have landed in another world. There are many hot springs around this place so don’t forget your bathing suit!

If you are in Iceland for many days and you enjoy hiking, then you should join a multi-day hiking tour to Laugavegur. This hiking trail is in the top 20 best hikes in the world according to National Geographic. The 55-kilometer long route between Landmannalaugar and Thorsmork is the most famous trek in Iceland. Its scenic and extremely diverse landscape is going to blow your mind! Find out more about Iceland’s best hiking routes!

The puffins arrived one month ago and now they are ready to show off their younglings! There are many places around Iceland to spot those cute little birds, but if you are staying in Reykjavik, you can join a puffin watching tour from the city’s harbor. Joining a tour is the ideal way to get really close to the colorful “Lundi”, as they call it in Icelandic. The guides will know exactly where to find them. The only time of the year to see puffins is from May to August, where the bird life in Iceland is in full bloom. Puffins tours are also very popular in the Skaftafell area where a tractor will take you out to an island where the cuties stay over summer. The Skaftafell Puffin watching tour is not to be missed.

The peak season to see whales is also during the summer months. Even though they can be spotted all year round, the highest chance of seeing them is from April to September. Iceland is a perfect destination to spot whales in their natural habitat. During summer, there are over 20 different species of whales and dolphins. The most common are Minke, Humpback and Harbor Porpoises! In the North of Iceland, there is a higher success rate to see them while on a whale watching boat tour. However, the chances to spot a whale departing from Reykjavik stay high.

Iceland has incredible geothermal energy. There are many natural hot springs around the island. A unique tour to take in June would be the Hot Spring Hunt. What could be better than relaxing in a natural hot river, surrounded only by nature? There is a short 7-kilometer hike throughout a geothermal area before you enjoy the warm waters.

Something incredible that just reopens in June is the kayak tour Jokulsarlon glacier lagoon. What an incredible experience to paddle between the huge icebergs! This is a truly magical place. Some icebergs are bright white, others are glacial blue and some have gray stripes, which is ash from old volcanic eruptions. Kayaking on Jökulsárlón, you will certainly encounter some seals on your way. They are sometimes seen playing around the ice chunks or just chilling on them, enjoying the sun. You can also spot seals on the Snæfellsnes peninsula, at Ytri-Tunga beach.

After some adventures, taste the traditional Icelandic food with the Golden Circle Local Food Tour. This allows you to visit the must-see of Iceland and to stop at local farms as well as restaurants to get the best culinary specialties. What a great combo!

Events around Iceland in June 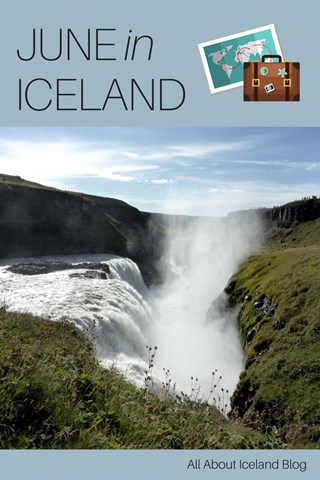 Things to do Around the Secret Solstice Music Festival

Festivals and Events in Iceland by Months

All the music & food festivals, events and national days you don't want to miss when visiting Iceland. What are the current events happening in Iceland and what will be going on in Iceland when you visit? Here is your guide to Events and Fe...

May in Iceland | All you need to know

May in Iceland is a really special time to visit. Nature is coming alive very rapidly now, spring and even early summer flowers are increasingly flourishing, the trees and grass are usually turning greener by the day.