The National Day of Iceland - 17th of June

The National Day of Iceland

What is the story behind the people of Arctic Adventures?

This is how the song we all sing during Iceland’s national day sounds. So if you are planning on joining us for this celebration just master this and you will fit right in.

Iceland’s national day is coming up and we are excited about the celebration. As an Icelander I am getting water in my mouth, this song in now stuck in my mind and I have started to think about how thankful we all must be for living on this tiny little island in the north.

But for you hearing the 17th of June might not give you such a feeling.
Let me try to explain this celebration.

What are Icelanders celebrating on the 17th of June?

You might not know this but Iceland was ruled by Denmark until 1944 and on the 17th of June, 1944 Iceland became a Republic and Sveinn Björnsson became our first president.

The day, 17th of June was chosen as it is the birthday of Jón Sigurðsson who fought for our independence, a major character in Icelandic history. You might recognize his face from the red 500 krona bill.  He was the leader of the Icelandic independence party.

What to wear for Iceland’s national day?

Icelanders like to dress up a little bit. Some go all in and wear the national costume but it’s getting to be less common as the years pass. Mainly due to the fact that they are super expensive and hard to buy. They are usually owned by families and go from one to another through time.

Here, for example, is me dressed in the costume of my mom’s family about 7 years old for the 17th of June celebration in Hafnarfjörður.

But no worries. You don’t have to dress like this but do try to dress a little nice. We also like dressing especially summery for this occasion. Not so much black, more colors.

How is the national day celebrated in Iceland?

It’s all about parades, candy, helium balloons, musical acts, and speeches. Almost every single town in Iceland has their own celebration. It’s very family oriented and everyone comes together. It’s a national holiday so most have the day off and it’s spent together celebrating and singing. Oh yes, and there is facepaint, A LOT of it!

If you join in the celebration you are likely to spot riders on Icelandic horses who often participate in the parades, flag bearers, brass bands and huge groups of Icelandic scouts.

Usually, a Fjallkona (in English the woman of the mountain) has been chosen by the 17th of June committee of each town and she will dress in Skautbúningur (the fanciest national costume) and recite a poem.

The Fjallkona is there to represent the fierce spirit of the Icelandic nation and of Icelandic nature. The idea of the Fjallkona originated in the period of romanticism that reigned when the first steps toward independence were taken.

After all the speeches and other acts, the less formal program takes over with musical acts and even more candy. Everywhere you look sports teams, scouts and other organizations will be selling candy and helium balloons (This is a big fundraiser day for many of them).

Soon the sky will be filled with helium balloons and you will hear crying from kids who have lost theirs. It’s all a part of the program. Actually, for me, it wouldn’t be the 17th of June without some crying kids and a balloon-filled sky. Sorry, not sorry.

For information on 17th of June celebration in Reykjavík visit this link here.

I know you are are dying to hear the song from the beginning of this post. Look no further!

Have you ever been in Iceland for the 17th of June? Tell us about it in comments below. 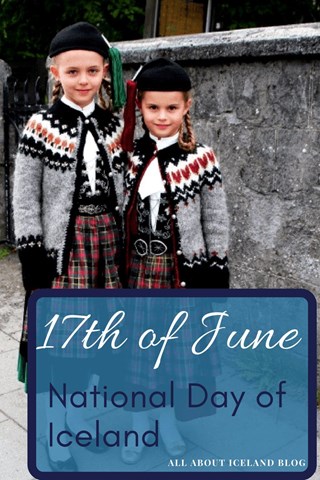 Hop On Hop Off - Reykjavik Sigthseeing

Iceland just became the smallest nation ever to qualify for the World Cup. Every year they seem to be breaking some kind of records. Here are some of the facts you need to know about the Icelandic national soccer team to understand them! Wh...