Seals in Iceland - All about the Icelandic Seals

Menu
More
Kay
|March 28, 2018
Loves writing, food, runes, Reykjavík life, traveling in Iceland and being out in nature. Born in England but fell in love with Iceland in 2010 and moved here, been here since.

Iceland, the island on the edge of the Arctic is also a fabulous place to spot seals. There are quite a few areas which are known for their seal colonies, making your chances of spotting a seal or a group of them, known as a pod or herd, much higher.

However, you can get lucky in many places around the coast. Here you can read all about the Icelandic seals, how and where to see them and fun trivia!

When I first came to live in Iceland I lived at Kópavogstún, Kópavogur, about 100 meters from the edge of the ocean. The name Kópavogur means ‘Seal Creek’, and I often walked the pathway around the creek, but all through my first spring and most of the summer I never spotted a seal. I think I even gave up looking at one stage, then one evening a movement in the water caught my eye, and I saw my first ever seal swimming in the wild! I must have stood transfixed for several minutes as barely rippling waves ebbed and flowed around it, and the coolness of the late summer evening became more intense and the sun edged below the horizon.

My own shivers reminded me that seals are creatures of the Arctic oceans and cold waters of the world. The composition of their skins, which has hair (unless they are fur seals), and their thick layer of dense fat ensure they are perfectly adapted to cold conditions. Their fat is extremely rich in lipids, selenium, vitamin E, antioxidants and collagen-fiber. Obviously, their high percentage of fat insulates them in freezing waters, but it also serves as a flotation enhancer, allowing them to float passively during dives, conserving their strength. A leaner seal would simply sink to the bottom if it tried to do this!

Since then I have enjoyed quite a few seal sightings, and even a ‘seal-cuddle’ when I lay down alongside one at Ytri-Tungu, a golden beach on Snæfellsnes.

How much blubber does a seal have?

A healthy seal has a far higher fat percentage than a human of a healthy weight. Weddell Seals have been extensively studied. Going into the autumn the seal will be insulated by a 5 cm (2 in) thick layer of blubber, giving them a fat percentage of between 40 and 50%.

What kind of seals are there in Iceland

The only seals which stay around the coast of Iceland and produce their young in Icelandic waters are harbor seals (phoca vitulina) and grey seals (halichoerus grypus). Many other species often visit including harp, bearded and ring seals. An adult grey seal can easily weigh 300 kg and grow to 2.5 meters in length.

How many pups can a seal have?

A newly born seal is known as a pup, and a female can produce just one pup per year. Females have mammary glands situated low down on their bellies, sometimes they do not allow their pup to feed, and other times the pup does not recognize its mother and refuses to suckle, so survival can be precarious. Grey seals feed their young for 16 to 21 days with milk which is 50% fat, during this period the mothers can lose 30 kg in weight. A seal pup weighs between 10 and 15 kg but it grows very rapidly.

The best places to see seals in Iceland

Hvammstangi and Hvítserkur on the Vatnsnes peninsula are areas with a very high number of resident seals, they are often seen in summer at Ytri-Tunga on Snæfellsnes, where herds of them tend to languish on the rocks – this is one of the few beaches with golden sand in Iceland. Eyjafjörður, the longest, and one of the most sensational fjords in Iceland, is a great place to see seals. Just walking beside the fjord I have spotted them. There are seal colonies on Eyjafjörður so whale watching boat trips on Eyjafjörður will also, often, provide opportunities for seal spotting. Regular boat or super-fast rib boat tours are operated, so you can choose which is best for you.

Seals are seen fairly frequently on kayaking trips, they love skerries and rocky lagoon-like areas, so choosing a kayak trip which explores these kinds of places will optimize your chances. A sea kayak trip from Stokkseyri would take you right into lagoons which are well-known seal habitats, although all kayak trips are good when you want to see seals. The Westfjords are another great seal watching location. The closest tour to Reykjavík is the Fjord Serenity where seals are spotted 98% of the time.

Seals can sometimes be seen around the coast of Reykjavík and out in the ocean, so walking beside the beach increases your chances of spotting them. Timing your walk to within two hours either side of low tide is best if you can do it, seals often come up onto the rocks then. They can also be sighted on whale watching boat trips, by going out on the ocean you definitely increase your seal-sighting chances.

There is, though, one sure-fire way to see seals in Reykjavík! The seals at the Reykjavík Family Park and Zoo are marvelously playful and always on show. Watching seals frolicking at such short range is fabulous. Children and those who are children at heart love seal feeding time, which happens in the afternoon.

The Icelandic name of this little zoo is Fjölskyldu og Húsdýragarðurinn, so the name appears this way on some signposts. There are no large exotic animals like elephants, lions and tigers, although the reindeer, birds and small animals are as impressive and enjoyable as the seals.

The mesmerizing and totally surreal iceberg-filled Jökulsárlón Glacier Lagoon is a seal habitat so taking a boat trip on the lagoon can often be a great way to see seals, surrounded by glorious Arctic scenery. Seals are sometimes seen at the nearby Diamond Beach, where they can even beach themselves on the shimmering icebergs, a truly astonishing and totally photogenic sight.

Iceland offers many opportunities for seal watching, so head for the coast, particularly to places with skerries and rocks. Seals come to visit, so they can be spotted at places which are not known seal habitats. To maximize your chances of success, check out the places and boat trips mentioned above in “The best places to see seals in Iceland” section.

The Icelandic Seal Center at Hvammstangi is situated at one of the best seal watching areas in Iceland. There are no live seals on show at this absolutely first-class seal research and information center, which has done a tremendous amount of work to advance knowledge about seals and seal habitats in Iceland. When you want to know all about seals in Iceland this is the place to go! Enjoy a documentary in the seal cinema and great exhibitions, learn about seal biology, their place in Icelandic traditions and culture, and interesting seal folklore and legends.

The legend of the ‘sea-wife’ is a famous Icelandic seal legend, which tells the tale of a man who stole the skin of a seal, transforming her into a woman. When she sat forlornly and weeping on the beach he rescued her and took her as his wife. To keep her in ‘human-form’ he kept her skin locked away in a chest, they had children together and things were good, until one day he left the chest unlocked. The temptation was too strong for the seal-wife, forsaking her husband and children she slipped into her skin and swam into the ocean waves from whence she came.

Landselur is, among other things, the Icelandic seal rescue center and sanctuary, situated by the harbor at Búðardalur in the Westfjords. In Iceland if a seal, or other wild creature, has been taken into captivity for some reason, it is illegal to release it back into nature. Landselur also takes on some seals which have been born in captivity at the Reykjavík Family Park and Zoo.

Ever seen a seal in Iceland? 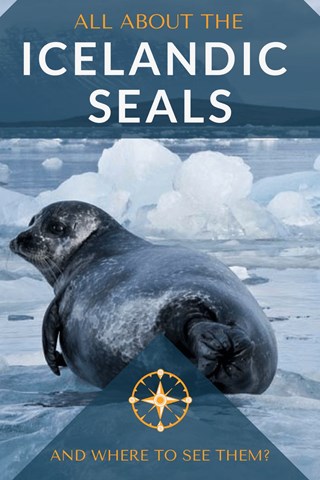 The Ravens of Iceland

From ancient Norse mythology and Viking folklore to modern day symbolism, the raven has always been revered in Iceland. But why is this bird so interesting? Where does the mystery come from? How do Icelanders feel about this black bird?