April in Iceland: Everything you need to know

April in Iceland: Everything you need to know

Menu
More
Kay
|January 30, 2020
Loves writing, food, runes, Reykjavík life, traveling in Iceland and being out in nature. Born in England but fell in love with Iceland in 2010 and moved here, been here since.

April is known as one of the cheaper months to visit Iceland and for the stunning sunsets and the epic start of summer where the summer and winter seem to be fighting a war. There are so many epic adventures and things to do in Iceland in April and here is the ultimate guide.

April in Iceland offers amazing opportunities. For the most part the weather is still quite wintery. However, spurred on by increasing daylight hours and a few warmer days, nature is springing into life.

Fabulous contrasts can often be experienced, the bud-leaves of springtime, snowy mountains, and the Northern Lights can still paint their visions of colour above scenery which is often dusted in beautiful frost and snow.

Great tours to do in Iceland in April

Is April a good time to visit Iceland?

In a word, yes. This is the time between winter and summer, when attractions are opening up, the atmosphere is improving in bars and restaurants, it’s not too crowded and some sites are still cloaked in beautiful snow.

Can you see the Northern Lights in April in Iceland?

In fact, while some winter months have the benefit of darkness for Northern Lights tours, they’re also colder, snowier and wetter than spring/summer months. And inclement or overcast weather can put a dampener on a Northern Lights tour (no pun intended).

The average high in Reykjavík is 7° C, with the average low being 1° C, and there is rain or snowfall on fewer days than in the winter.

April often brings quite a variety of weather from minus temperatures to days which are quite warm, with sunshine, rain or snow. With temperatures usually rising and falling quite a lot, snow does not normally lay on the ground for very long, although there are exceptions.

Dressing in layers is the best way to go in Iceland, never more so than in April. We’d also recommend you to check out the weather in Iceland before your trip.

Things to do around Reykjavík in April

There’s no shortage of fabulous things to do in our capital at this time of year. Here are some of our favourites:

Events in April in Reykjavík

Wildlife in April – The Cutest Time to visit Iceland

Can you see puffins in Iceland in April?

Yes! In fact, this is one of the best times of the year to see these adorable birds.

Iceland has a huge and world-famous puffin habitat, the Látrabjarg bird cliffs. April is the month when the puffins begin to return to Iceland after spending the winter out on the ocean. South Iceland, West Iceland, East Iceland and North Iceland all offer wonderful puffin watching locations. Our Puffin tours are a great way to see the adorable little birds in their natural habitat.

You can read more about puffins in Iceland on our blog.

Newly born lambs are drop-dead gorgeous. In Iceland, the lambing season begins in April and continues into May. The best way to enjoy the lambs, and to collect some cute moments to cherish, is to stay on a sheep farm out in the countryside.

Birds in Iceland in spring

Apart from puffins, whooper swans, geese, white wagtails and many other bird species who migrate to Iceland for the summer, return in April, sometimes even at the end of March. You won´t miss out on wildlife if you visit Iceland in April.

Public holidays have a small effect on holidaymakers in Iceland, because it sometimes means shops will be closed or have reduced opening hours. Some public services (such as public transport) might be marginally reduced too.

It’s worth it, though, as these public holidays also bring lovely events with them, many of which are free.

In the capital, the iconic glass-faceted concert hall by the harbour, Harpa, holds an annual concert at this time of year. Top Icelandic opera singers and musicians always feature in this recital. Visitors and locals are welcomed at Easter Masses and Church Services.

The Icelandic flag is suspended at half-mast on Good Friday, and the Christian Churches hold special Easter Masses and Services. Although not many Icelanders are regular church goers nowadays, Easter is one of those occasions when a few more people like to go. This is a very busy weekend for Icelandic choirs, so if you like choral music, it’s a great opportunity to hear these wonderful singers.

Easter is a movable feast, meaning that dates change every year, but it tends to take place in April. Maundy Thursday (known in some other countries as Holy Thursday), is the Thursday before Easter Sunday and it’s a public holiday in Iceland.

The First Day of Summer

Also known in Iceland as “Sumardagurinn fyrsti”, it is the first Thursday after the 18th April. So, it will be between the 19th and 25th April, with the date changing depending on the year.

First Day of Summer street parades are held to mark the occasion. This is usually heralded by an Icelandic flag bearer or several brass bands along with scouts and other organizations marching through the streets of Reykjavík.

This is one of our country’s “Icelandic Flag Days”, which means you will see all of the Icelandic flags at full mast.

Many visitors are surprised when they discover Icelanders celebrate the first day of summer so early in the year. After all, this is not a country famous for its balmy summer weather. However, the settlers of Iceland followed the Norse calendar which was divided into just two seasons, winter and summer. This explains why summer would be celebrated so early.

In ancient times April was known as “Harpa”, which has feminine associations, perhaps linked to the fertility of the earth beginning to manifest new growth in northern climes. And in many ancient cultures, the first days of summer heralded the beginning of the new year.

The First Day of Summer has quite often been graced by falling snow, although, sunshine and chilly temperatures are also common.

Tradition says a hard frost the night before the First Day of Summer is an excellent omen: Apparently it means that the approaching summer will be pleasant and long.

Tourist attractions are normally open on public holidays. But some, particularly in the countryside, will have reduced opening hours. Most places post these details on their websites and Facebook pages. If you still can’t find the information you need, just phone or message them.

Swimming pools often have different opening hours during public holidays. In the capital, you will find many pools which are open on public holidays in April. Even in the countryside, you should find a pool open at some point over Easter. Icelanders love to go to the pool whenever they have extra leisure time.Most regular grocery stores, such as Bónus, never close for the whole of the Easter weekend, they will always be open as normal on Saturday. In Reykjavík and Akureyri, you will find other grocery stores, such as Hagkaup, which are open on Maundy Thursday too. 10 to 11 stores are open far more, but they offer less choice and are more expensive.

AK Extreme, a spectacular snowboarding and music festival, takes place in Akureyri over a weekend early in April.

If you want your trip to this beautiful city to be enlivened by great music and incredible snowboard acrobatics – this is the place to be. The big snowboard hill is built right in the centre of the town beneath the high mountains.

Top international snowboarders come to participate, so invitations to this event are a hot property in the snowboarding community. The festival also includes musical events throughout the town.

This far north, you can expect temperatures to be lower than they are in Reykjavík. And yet, spring-like days pop-up unexpectedly in April, usually sandwiched between far colder, but often very bright days. 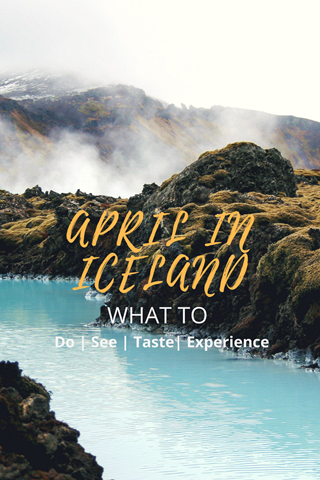 Whale Watching & Sea Angling Tour in the North of Iceland

March in Iceland | All you need to know

Wondering how to spend your time in Iceland in March? Or wondering if you should even visit Iceland during that month?

Iceland in February – All you need to know

Just about any time of the year is a good time to visit Iceland, but February is especially magical.

Iceland in August: Everything You Need to Know

Iceland in December is a magical place, filled with lights, laughter and thrilling activities. Don’t let the cold scare you!