Lake Myvatn was formed by a large basaltic lava fissure eruption 2300 years ago. The landscape of this highly active volcanic region is dominated by pseudo craters. Skútastaðir, on the south shore of the lake, has a well-known pseudo crater cluster which is popular with tourists. There are lava islands in Lake Mývatn which give a surreal and at times dreamy atmosphere to this place.

Lake Mývatn
The Diamond Circle
Where is Lake Myvatn located?
How to get to Lake Myvatn
Accommodation and Hotels Near Lake Myvatn
Camping near Lake Mývatn
Mývatn | Things to Do
Mývatn Nature Baths | The Blue Lagoon of the North
Dimmuborgir
Hverfjall Volcanic Crater
Námaskarð / Hverir Geothermal Area

Lake Mývatn and its surrounding wonders often referred to as the Myvatn Geothermal area are a part of the Diamond Circle in North East Iceland. The lake and its neighboring wetlands are protected as a nature reserve and are highly cared for by locals.

The idyllic blue lakes and hot pools, sandy mountains, volcanic craters, and colorful mud pools make up the most incredible setting and many describe the area as being otherworldly – “like something for outer space”.

It isn’t a place of many trees nor is it a place of glaciers. This part of Iceland is captivated by the geothermal force and the land shows a clear sign of all the volcanic activity that has taken place there in the last centuries. 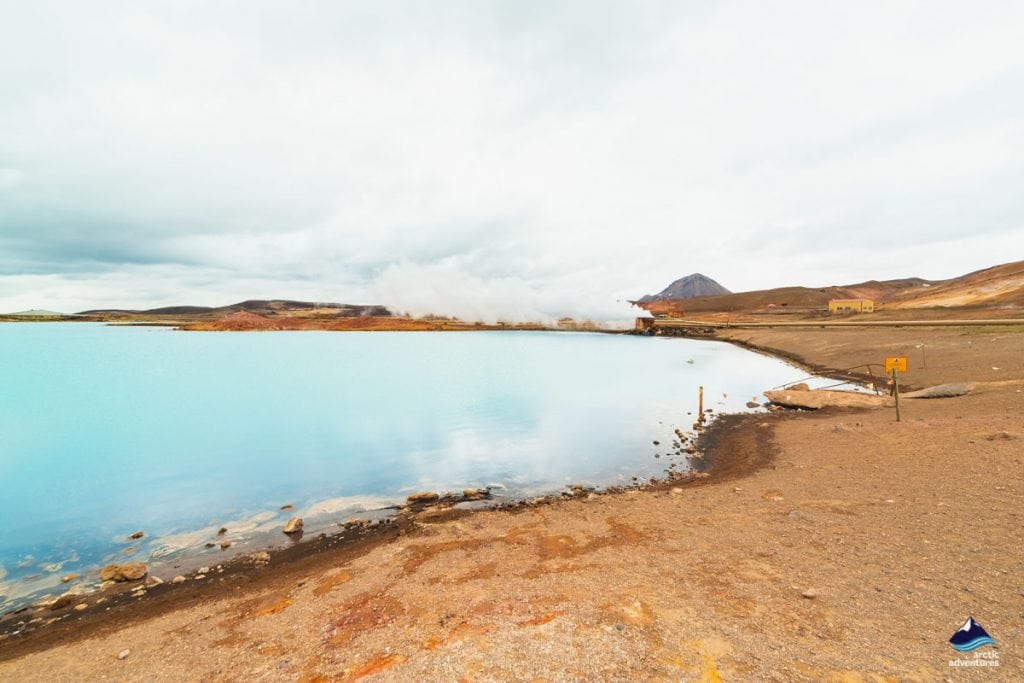 The colors found in the area are in extreme contrast with the pitch black lava fields and mountains all around. The rhyolite red and purple mud pools at Námaskarð and the azure blue waters of lake Mývatn are spellbinding and seem to come from out of nowhere into the fairytale land of Mývatn.

The Mývatn geothermal area has so much to offer when it comes to sights and attractions and here we will go over the must-sees and tips to improve your travel in the area. 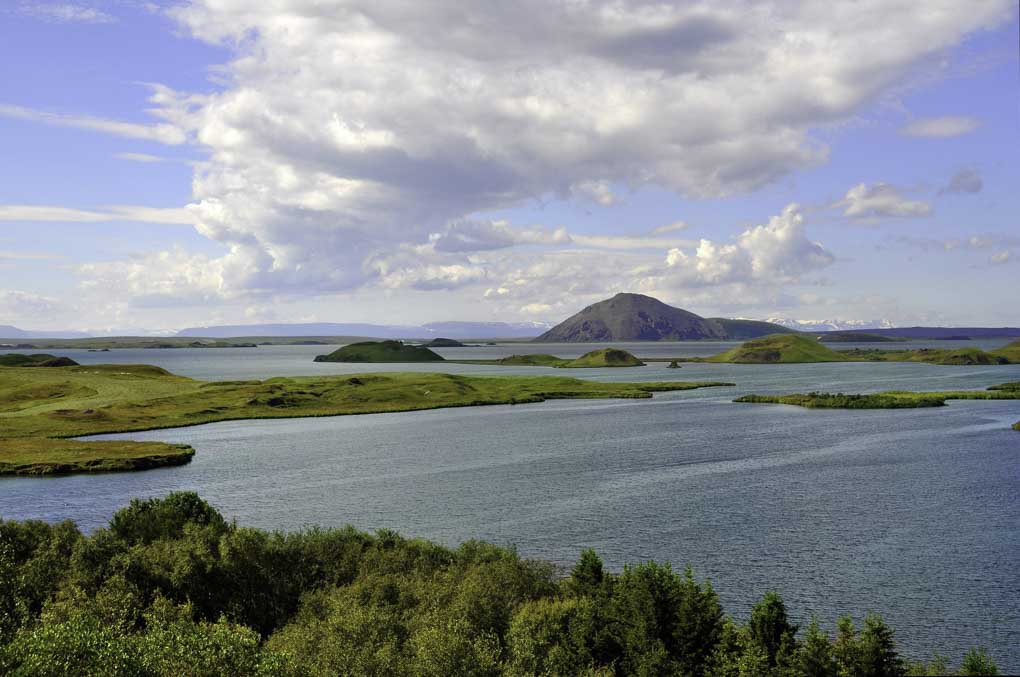 The water in Lake Myvatn has a particularly high level of biological activity due to the very high levels of nitrogen, phosphorus, and other nutrients. This has promoted an abundance of plants and algae, with the plants and algae doing battle to see which can become dominant!

This is an important bird protection area and many species of duck and other water birds can be seen here. One of the rarest and sought-after sightings would be of Flórgoði or e. Horned Grebe which during spring carry their babies on their backs around the lake. 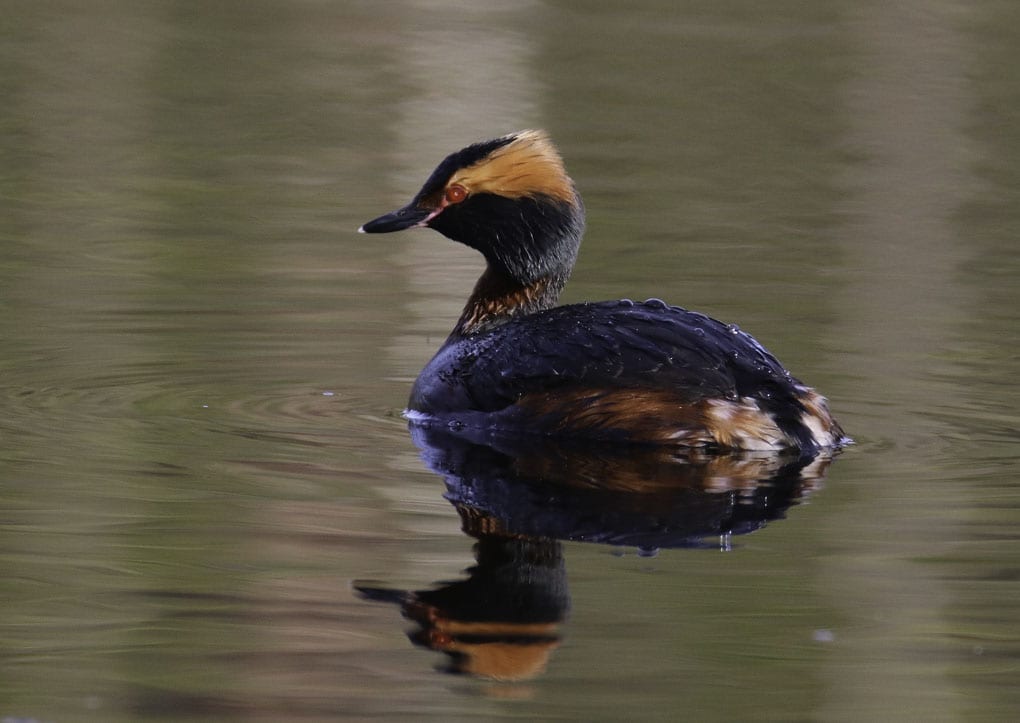 Myvatn, in its current form, was created about 2000 years ago when a series of volcanic craters erupted in Þrenglaborgir and Ludentsborgir at a range of 12 km (7,4 mi). The lava field that came up during this eruption was named Laxárhraun yngra or Salmon-River-Lava-Field The Younger.

The lava field is about 220 sq km and is the biggest lava field from the beginning of the Mývatn county. Laxárhraun yngra forms the bottom of Lake Myvatn and stretches all the way down the valleys Laxárdalur and Aðaldalur, and down to the ocean at Skjálfandi.

Fun Fact: Lake Myvatn is the 4th largest lake in Iceland about 39 sq km but only about 4 meters (13 ft) deep at its deepest level.

The Diamond Circle is the North’s answer to the South’s Golden Circle. This 260 km (161,5 mi) long sightseeing route is truly enchanting and is composed of Ásbyrgi the horse-shoe shaped canyon, Dettifoss Europe’s most powerful waterfall, the fishing town of Húsavík and our beloved turquoise Lake Mývatn. These four attractions together form the Diamond Circle.

The Diamond Circle is great bucket list material for travels in the North of Iceland but doesn’t overlook the other attractions. The North East is genuinely a captivating located to visit, with far fewer tourists and short distances between the sights it is sure to become popularity equal to the South Coast in only a few years. 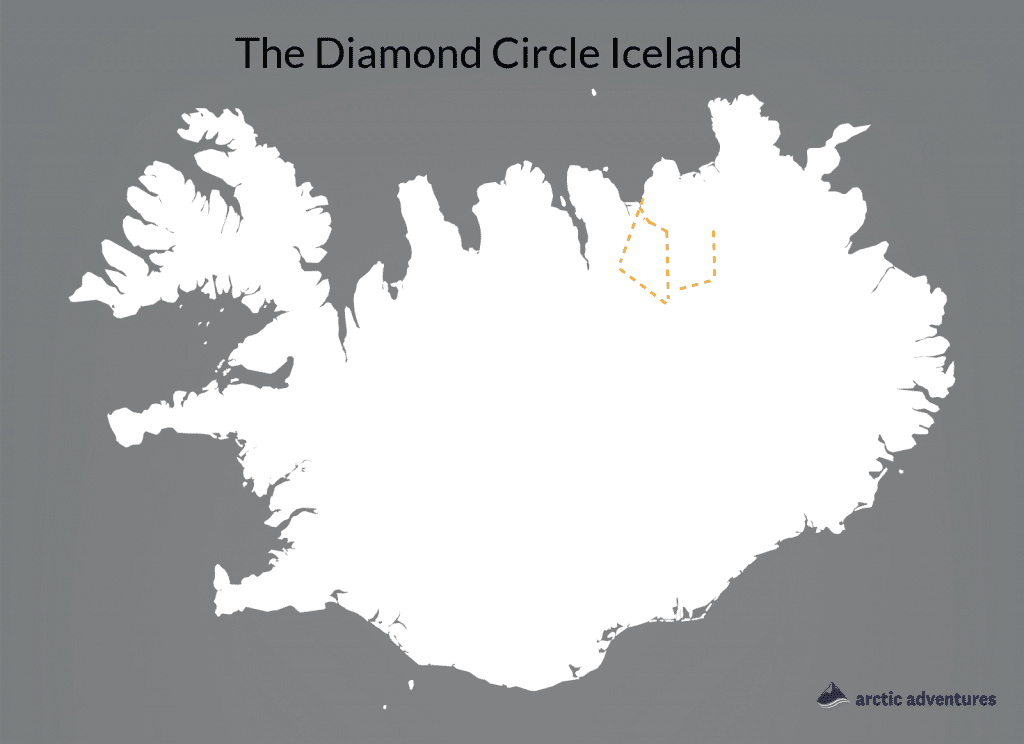 Where is Lake Myvatn located?

How to get to Lake Myvatn

There are a few ways of going about visiting Lake Mývatn. There are dozens of wonderful tours, there is always the option of taking a road trip and there are flights available to nearby airports such as the one at Akureyri or at Húsavík or you can catch a public bus to Reykjahlíð. 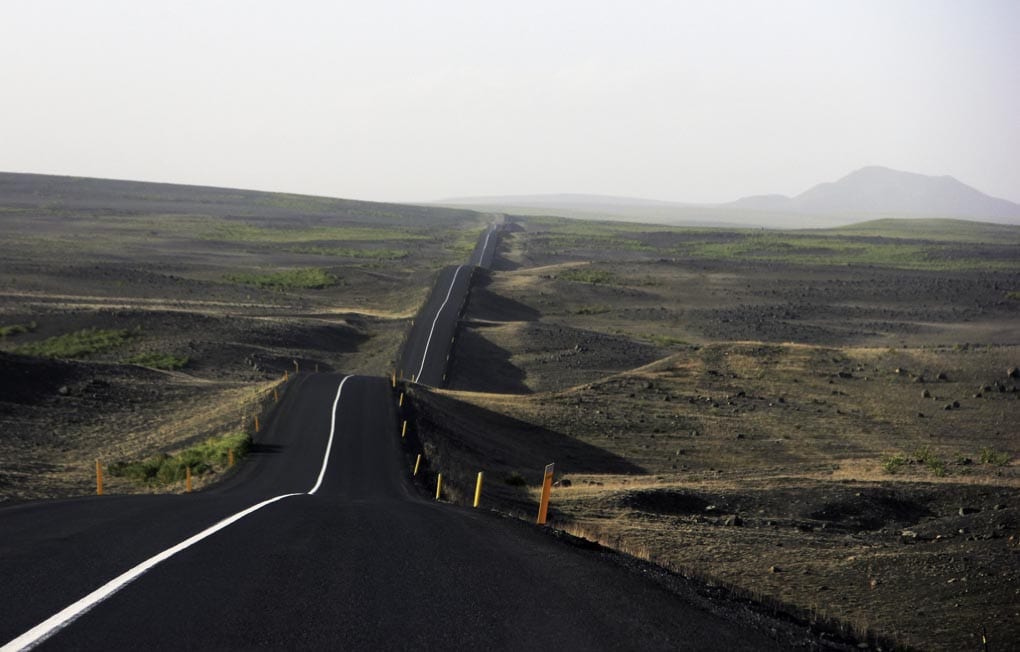 Driving from Reykjavík to Lake Mývatn will take about 6 hours and will take you past some of the most charming sights and attractions Iceland has to offer. Including Borgarfjörður, the seal watching at Húnaflói, Glaumbær Turf farm and Museums, the lovely Skagafjörður, Akureyri, and Goðafoss waterfall. Note: We don’t recommend doing the drive in one day, there is just far too much to be seen!

Driving from Akureyri to Lake Mývatn shouldn’t take more than 1 hour 15 minutes and is a scenic drive to take, going further along Eyjafjörður and into the fertile Fnjóskadalur valley, past Lake Ljósavatn, Laugar village and Lake Másvatn.

Driving from Egilsstaðir to Lake Mývatn should take a little over 2 hours. It is a lovely drive through stellar landscapes and past historical sites, over the famous lake Lagarfljót and past Námskarð, Námafjall and Hverir area, the active Krafla Caldera and its power plant.

Accommodation and Hotels Near Lake Myvatn 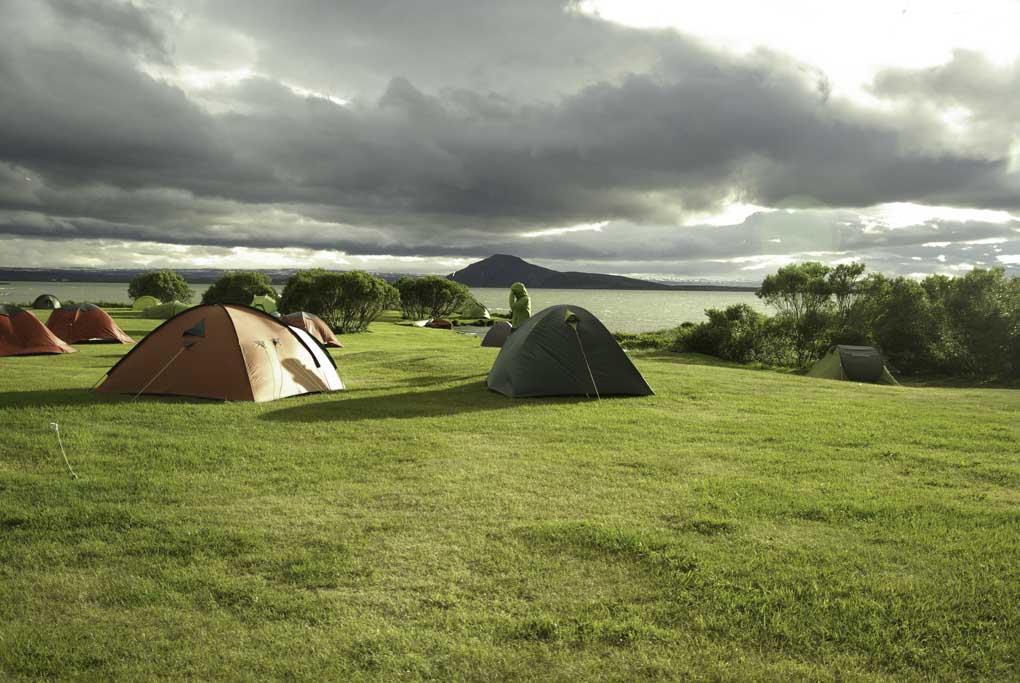 Hlíð camping ground is conveniently located on the northern side of lake Mývatn, right by the village Reykjahlid and only 5 minutes walk away from the tourist information center, supermarket, and café. The view from the camping ground over the lake and lava field is exquisite.

Bjarg camping ground is smaller but has an equally stunning view over the lake.

Please note that it is forbidden to stay overnight in a car or camp anywhere outside of the designated campsites.

Mývatn | Things to Do 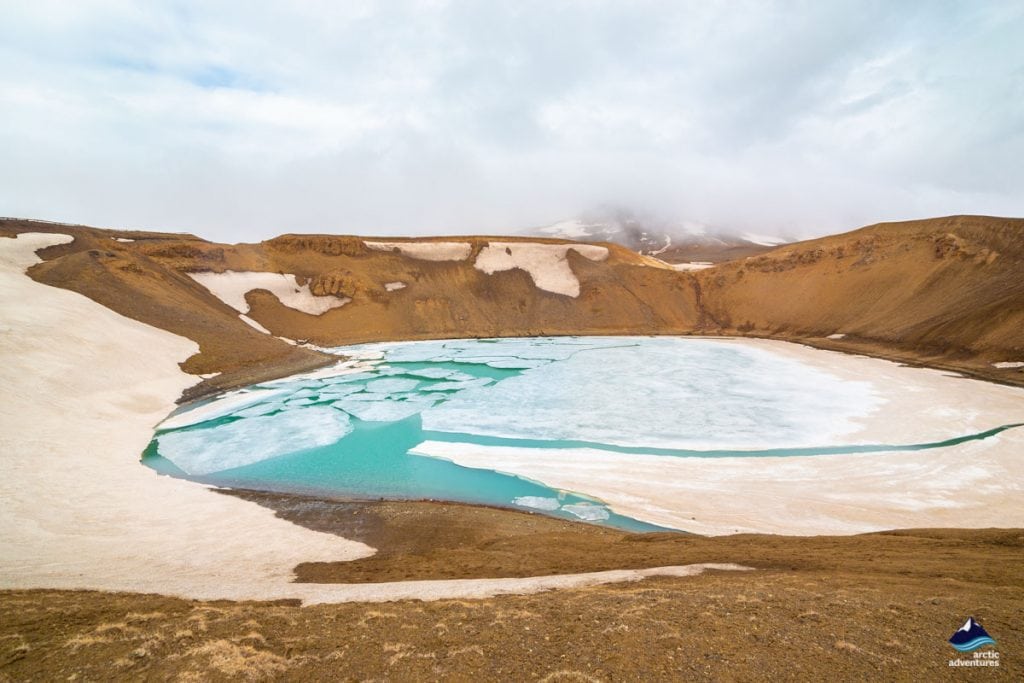 Mývatn Nature Baths | The Blue Lagoon of the North 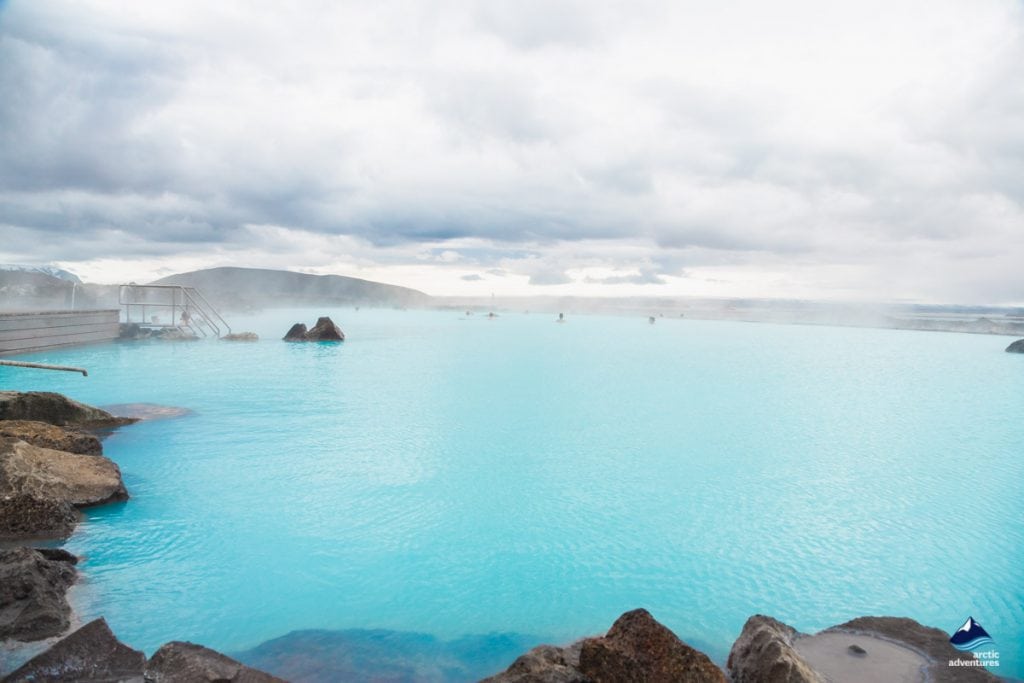 A visit to Myvatn Nature Baths is a very special experience! Bathing out in nature is supremely relaxing and magical. Each season offers a different experience to visitors, sparkling frosts, snow and the northern lights in the winter, a temperate climate and the midnight sun in the summer.

The bathing lagoon is filled with water from a borehole in Bjarnarflag. When the water comes up from the earth it has a temperature of around 130°C or 266 Fahrenheit, so it has to be cooled before it is ready to be used for bathing. This water is alkaline and it is enriched with many minerals, its composition makes chlorine or other chemicals unnecessary.

The trace elements in the water often help skin problems. Two steam baths have been built directly over the top of a geothermal area. Sulfur and odor-free steam simply rise up through the vents in the floor, usually with temperature is around 50 C. Steam straight from the earth, how special is that? No wonder the Icelandic people named these baths Jarðböðin (The Earth Baths). 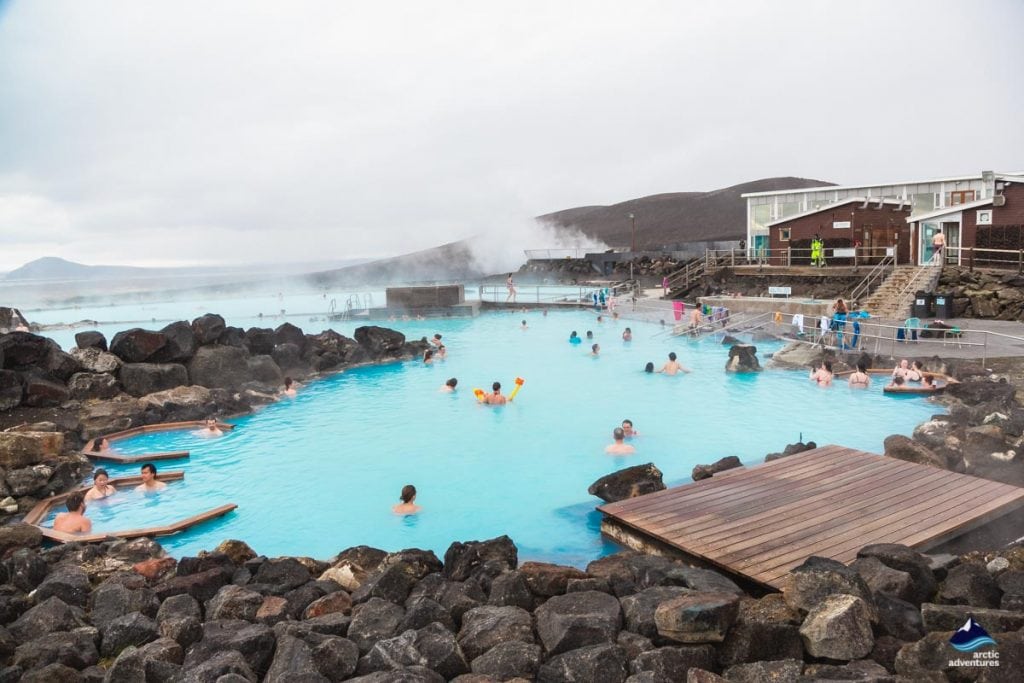 The changing rooms at Mývatn Nature Baths can accommodate up to 300 guests at a time and you can safely store your belongings the lockers provided with an entrance ticket. Valuables are though asked to be left in the reception with staff members.

The parking lot at Mývatn Nature baths is free for visitors and is quite large for a location such far North.

There is a restaurant with panoramic views offering drinks, meals and a wide range of tempting treats. Lake Mývatn deserves a place on your bucket list! 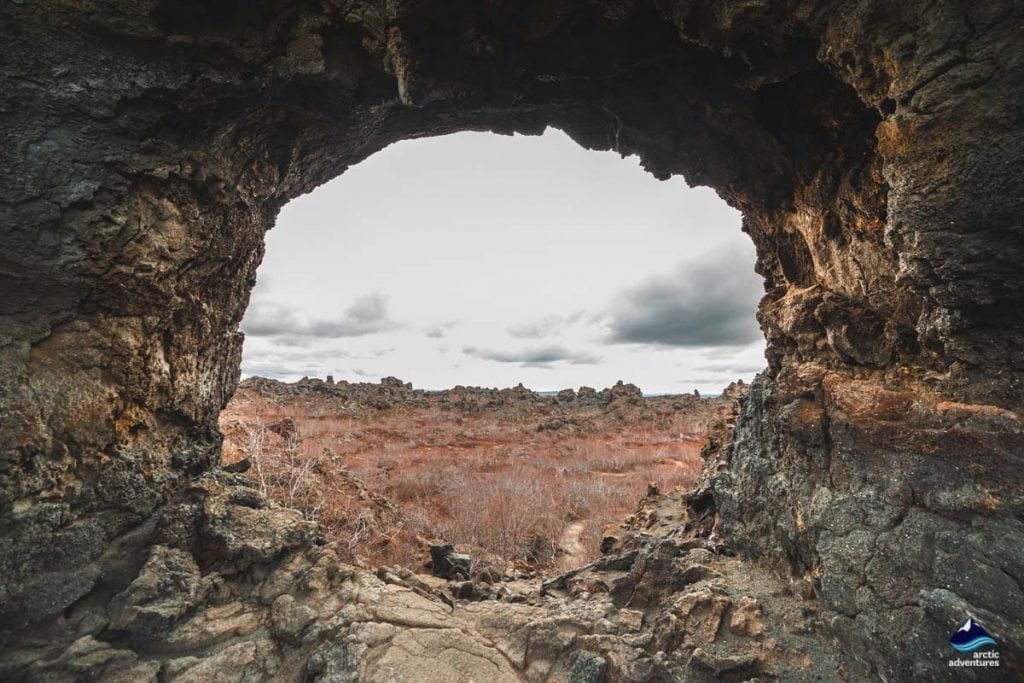 Dimmuborgir lava park formed in the same eruption as Lake Mývatn’s bottom when Laxárhraun yngra came up. It is somewhat of a circle-shaped lava arch with a diameter of about 2 km (1,2mi). The arch is highest in its center about rising about 20 meters (65,6 ft).

Inside the arch, you will find alluring flora including a small birch forest that makes the scenery even more stunning. The area is also home to many lava caves and rock formations making the place “a favorite in the North” of many visitors. Dimmuborgir has some man-made walking paths so you can easily get around to explore the location. 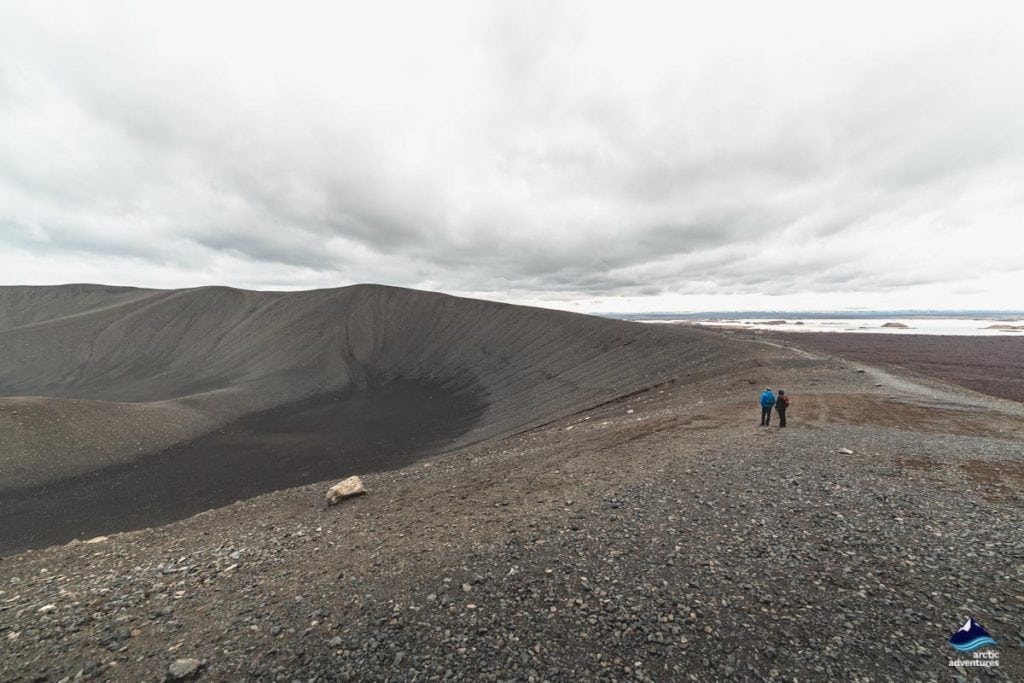 Hverfjall Volcanic crater is an outstanding beauty spot to visit within the Lake Myvatn area. The name, Hverfjall, would roughly be translated Geyser Mountain but the word Hver means Geyser in most areas in Iceland.

Still, It is important to note that in this specific region of Northern Iceland the word Hver was, in the ancient times, used for Craters so the name is better translated Crater Mountain, which is very fitting as this mountain is actually a crater, not a geyser.

The crater was formed after the last ice age in an explosive eruption about 2500 year ago. The eruption lasted 1-2 days and the content of the eruption stacked up around the open crater creating somewhat of a sand dune bowl. The crater is today still quite large in size about 1040 sqm and 150 meters high. The black Hverfjall is a sight not to be missed! 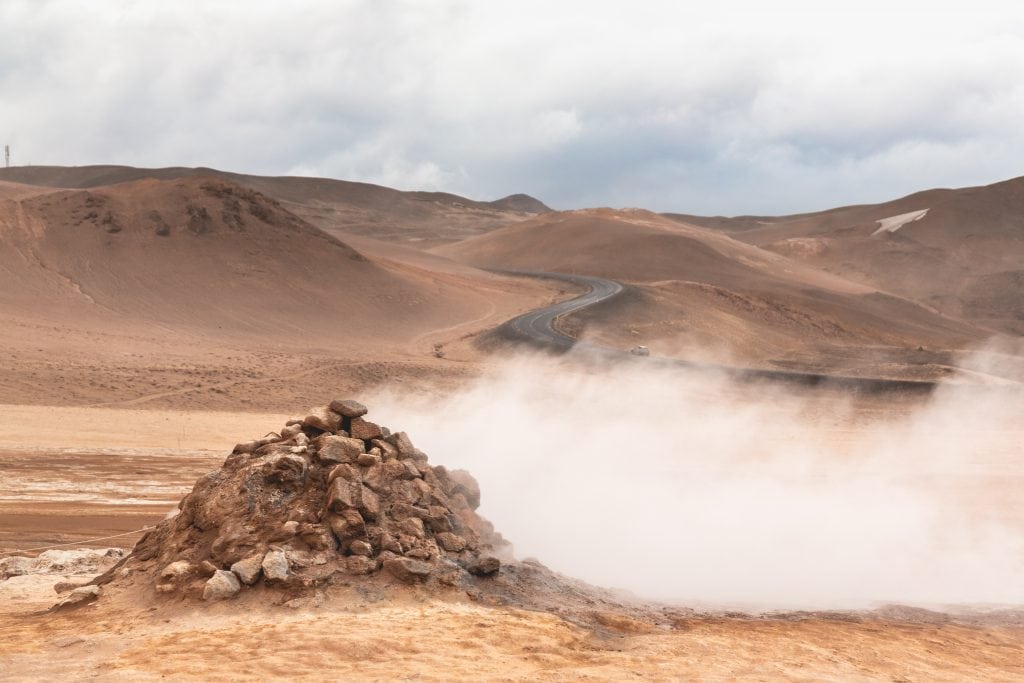 The Námaskarð mud pools also known by the name Hverir Geothermal Area is a picturesque steam-filled location near Mývatn. The expanse of hot springs, mud pools, mud pots, and brimming fumaroles is endless and the natural energy is relentless.

The area is a colorful and stunning location for all nature enthusiast and truly gives you an idea of the power within Iceland’s grounds. Even on the coldest of the Winter day, some parts of the ground will stay snow-free due to the sheer warmness of the terrain.

Note, going past lines or marked areas is strictly forbidden as the muddy grounds can be very thin and hide the dangerous burning springs right under. 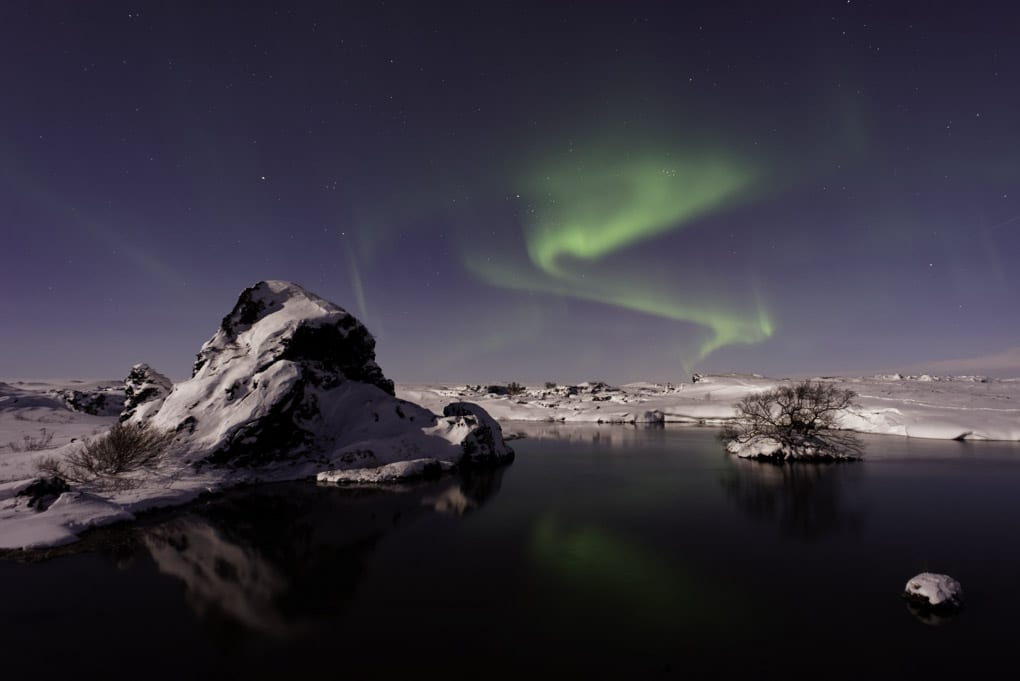 The Mývatn Geothermal Area is an incredible place to visit in Winter. Imagine snowy hills and steam coming up in between, pitch-black lava fields and volcanic craters sitting beside multicolored rhyolite pools with icy scapes in between.

This is where you truly feel the ice and the fire meet and where you get in contact with the spirit of Iceland’s natural force. Whether it is taking a bath in the Mývatn Nature baths, exploring the pseudocraters of Skútustaðagígar or simply roaming around the geothermal paradise of Námaskarð you are sure to be amazed. 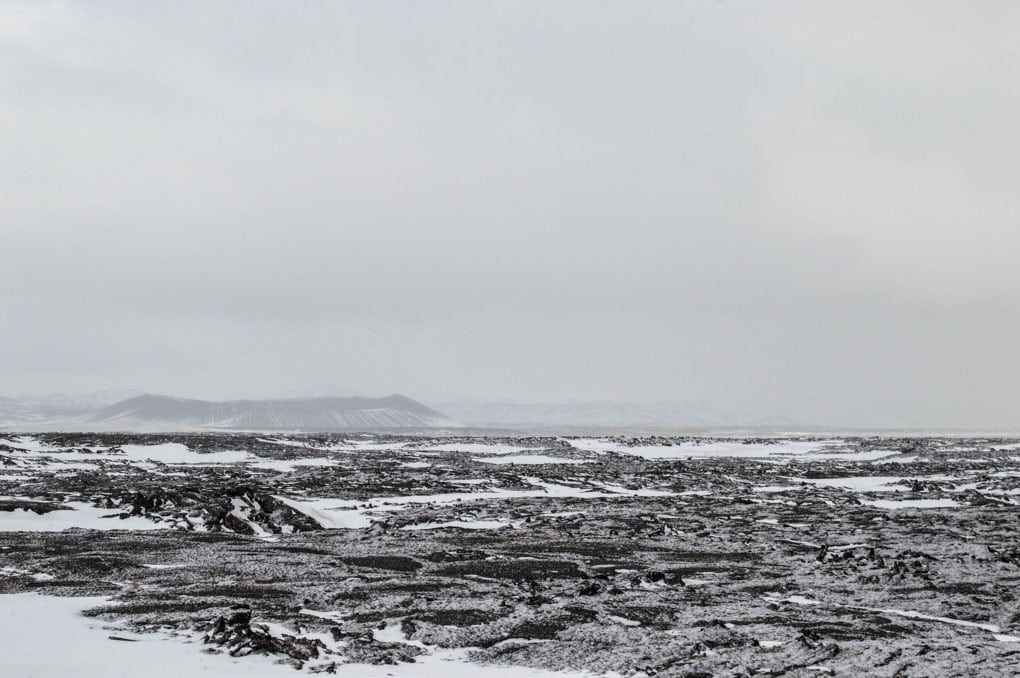 Still, you will need to be better prepare a for winter travels around Lake Mývatn than in Summer, check road.is for road conditions and vedur.is for the weather. If you are used to driving in full winter mode or if you aren’t and want to join a guided tour, winter shouldn’t stop you – go explore! 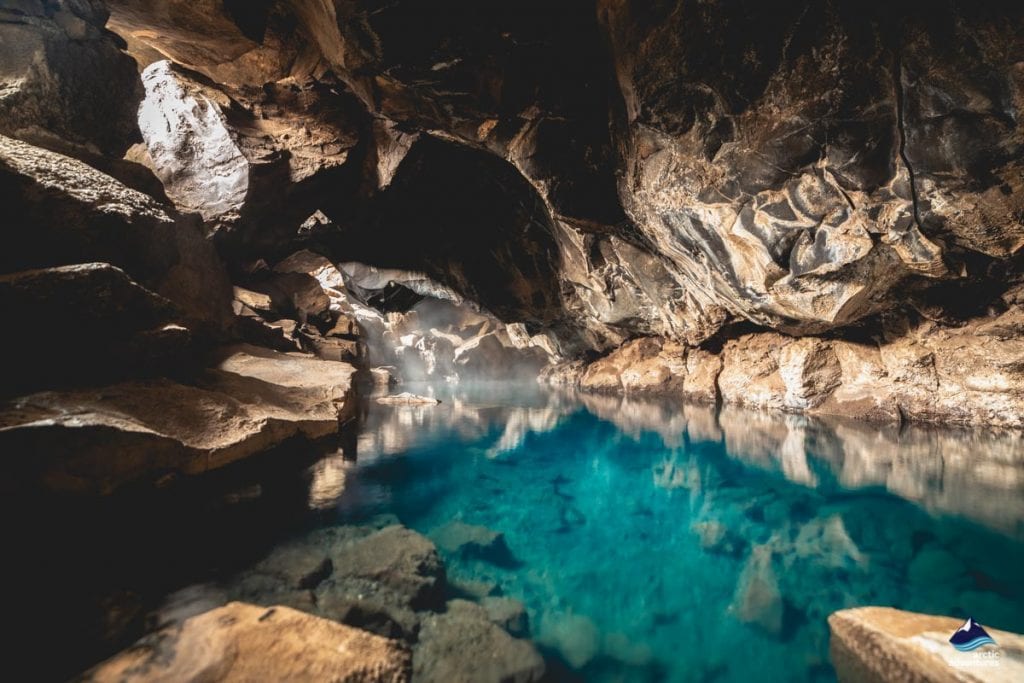 Grjótagjá Hot Springs and Cave is where the famous sex scene with John Snow and Ygritte was partially filmed but the rest was filmed in a studio as the fumes inside the cave were disrupting the cameras.

Another famous scene is in season three where Mance’s Rayder’s wildling army camp was built on a frozen lava field. This place is actually Dimmuborgir located very near Lake Mývatn.

The area was used again in the filming of the scene where Samwell Tarly and Lord Commander Mormont are attacked by White Walkers.

Some of the filmings took place in temperatures as low as -11°c or 12 Fahrenheit.

The 3500-year-old lava cave is a world of ice and darkness, located in the northeastern part of Iceland near Lake Myvatn.

Join us for this Extraordinary Tour and Experience the Unmatched Nature of North Iceland and the South Coast!