Why October is the best time to visit Iceland

Why October is a the best time to visit Iceland

October is an important time of year for Iceland, as it marks the official end of the summer season and the beginning of winter.

As the name of our country implies, there is absolutely no shortage of great things to do in Iceland during the winter months. In fact, many consider this the very best time to take a trip to the land of ice and fire.

Indeed, some of Iceland’s most amazing natural attractions, such as glaciers and ice caves, are at their most spectacular at this time of year, while some of our most curious and exciting wildlife can be spotted, as well as a few unique festivals. So please read on to find out all about what our country has to offer during the month of October!

As the summer season is still winding down in late September, the average day temperatures are cool, but not overly chilly, coming in between 2.2 °c (about 36 Fahrenheit) and 6.8 °c (about 44.2 Fahrenheit). With that in mind, October could be considered Fall or Autumn, as far as Iceland is concerned.

How many daylight hours are there?

In the early days of October, you can expect to see about 11 hours of daylight. By the end of the month though it’s closer to 8. No matter which end of October you spend in Iceland, you will have plenty of time to take part in all of the great daytime activities which our country has to offer!

While you’re here, you should always make sure to ‘bookend’ your days by viewing the beautiful Icelandic sunrises and sunsets. They're worth waking up early for and there’s no better way to wind down and finish your day than taking in one of the world’s most spectacular sunsets.

Can you see Iceland’s Northern Lights in October?

What should I wear in Iceland in October?

As is the case when visiting Iceland during any month of the year, your number one clothing priority should be a comfortable, durable and, preferably, waterproof pair of shoes. As pretty much any Icelandic activity will involve walking on uneven terrain, this is not a time for fancy footwear such as high heels! You should always opt for form over function, especially as the winter season starts to roll in.

What to pack for Iceland in October:

Does it snow in Iceland in October?

It is much less likely to snow at this time of year than it is to rain. While not unheard of, you will be unlikely to encounter thick or heavy snowfall when you visit Iceland in October. However, as is always the way when you visit the land of ice and fire, you should always expect the unexpected and pack accordingly!

How much rain does Iceland get in October?

Statistically speaking, October is the wettest month of the Icelandic calendar, and it is quite windy too, so a combination of layers and waterproofing is strongly recommended. Removable clothing that can be stored away easily, such as hats, scarves and gloves are good additions to your October ensemble as well. While you may not always need them, you’re better off having them and not needing them than the other way around!

Things to do in Iceland in October

October is the month where Iceland starts to earn the ‘ice’ part of its name. It is at this time of year when the winter season starts to kick in meaning glacier tours and ice cave tours start to operate. Remember though, October is only the beginning of the winter season, so some ice caves may not be open to public tours yet. It is always a good idea to get in touch with your tour operator to find out which activities offer the best value for money.

As it is the beginning of the winter season, other, more adventurous winter activities such as glacier hiking, ice climbing and snowmobiling start coming into their own too, meaning visitors will be spoiled for choice!

What animals can you see in Iceland in October?

For those who are interested in nature tourism, October is something of a ‘last chance saloon’ when it comes to seeing some of Iceland’s most iconic animals. It is the last month where you can see our adorable puffins before they migrate away for the winter. The same can be said of our whale watching tours; while some species of whale live in Icelandic waters all year ‘round, others will migrate off to warmer waters in November, so October is a good time to try and get a look at these gentle giants.

October is also a very good time of year to look for Iceland’s most famous and enigmatic animal, the arctic fox. It is this time of year when the foxes change colour, from their brown spring-summer appearance, to their fluffier white coat. Arctic foxes can be hard to spot, as they are master camouflage artists, so your best bet is to head out with an experienced guide on an arctic fox-watching trip.

When planning any trip or vacation, it is always a good idea to plan ahead in order to make the most out of the limited time available to you. With that in mind, we have created several itineraries which we feel will help visitors experience the best that Iceland has to offer.

For those who are only stopping over for a long weekend or a midweek break, the 3-Day South Coast & Golden Circle Tour brings you to some of Iceland’s most amazing natural wonders, including Jokulsarlon Glacier Lagoon, the Diamond Beach and the Geysir Hot Springs. This tour provides ample opportunity to go glacier hiking and ice caving during the day, while setting you up for your best opportunity to see the Northern Lights in the evening

If you’re planning on staying a little longer, the 4-Day Tour of Iceland’s South Coast should be right up your alley. This fantastic sightseeing tour incorporates everything from the 3-day tour, but with the added bonus of a trip to Iceland’s fabled secret lagoon!

If you’re looking to experience the majority of Iceland, and not limit yourself just to the south coast, then we would recommend a longer stay so you can fit it all in - a 5 Day Tour of Iceland should do just the trick! This way, you can experience everything the south of Iceland has to offer, from the beautiful black sand beaches to the capital city of Reykjavik, as well as a selection of great attractions found in Iceland’s Snaefellsnes Peninsula, such as Hellnar Village and the Krauma Nature Resort.

If you plan on spending a full week in Iceland during October, then you are in for a treat! That should give you just enough time to circumnavigate the entire country. The 7-Day Complete Tour of Iceland takes you from Reykjavik, across the south coast and all the way up to Davlik, one of Iceland’s most northern points. The tour includes everything you could want from an autumn trip to Iceland, including Skaftafell National Park, the Crystal Ice Cave, a whole host of majestic waterfalls and a spot of whale watching.

Traditionally, October is not considered the busiest month in the Icelandic calendar when it comes to festivals and events. Since the days start getting shorter and the temperatures start to get colder during this time of year, outdoor concerts are in short supply (there are plenty of Icelandic festivals in the summer months).

That said, there are a couple of major Icelandic events which take place in October, both of which attract many visitors from all over the world:

The Lighting of the Imagine Peace Tower

Every October, Iceland’s capital city of Reykjavik’s Videy Island bears witness to the spectacle that is the lighting of the Imagine Peace Tower This amazing lights show was conceived by world famous artist and peace advocate Yoko Ono as a loving tribute to her late husband John Lennon.

Taking the shape of a wishing well, the Imagine Peace Tower is a literal shining beacon made to visualise world peace, while the name comes from John Lennon’s iconic song ‘Imagine’. The ‘tower’ itself is made up of multiple lights which shine upward, forming a beam which rises high into the night sky. Due to Iceland’s unique and ever-changing weather conditions, no two light shows are the same, making each visit to the Imagine PEace tower a uniquely wonderful experience.

The Imagine Peace Tower is lit every year on the 9th of October, to mark John Lennon’s birthday, and runs until the 9th of December, which marks the anniversary of John Lennon’s tragic death. It is a spectacle quite unlike anything else on Earth!

Like most things in Iceland, RIFF has a certain uniqueness to it as well. Films screenings take place in a combination of traditional movie theater / cinema setups and less conventional locations, such as swimming pool halls and hot baths - now that's a different way to watch a movie!

So what are you waiting for?

Seeing as you are still reading this blog, we think you might be interested in coming to visit us this October. Why not browse our fantastic selection of adventure tours suitable for Iceland’s winter season. 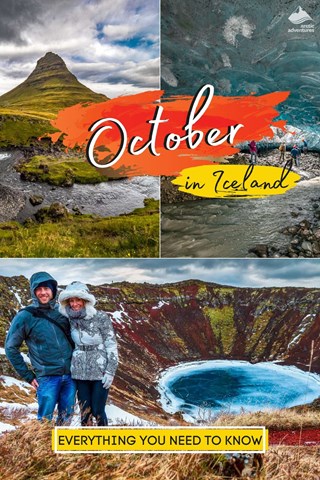 Glacier snowmobiling from Skjól or Reykjavik

Things to Do in Iceland in September

November is a beautiful month to visit Iceland. It might be cold but there are endless options for great activities and fun! Here are some ideas on what to do in Iceland when visiting in November.

Iceland in December is a magical place, filled with lights, laughter and thrilling activities. Don’t let the cold scare you!