The weather in Iceland seems to change faster than anything else in nature. It might be sunny one minute and then pouring the next. And yet, Iceland is probably the warmest Arctic country in the world. The temperatures in Iceland are much milder than most people expect for its northern location.

Icelandic weather creates the best environment for those who want to see the Northern Lights. There is no other country near the Arctic Circle where the winter can be as mild as 0°C (32°F) on average!

When it comes to standing in the open air in the middle of nowhere for hours, watching the sky, and looking for the Northern Lights, the temperature will probably be the most important factor affecting the way that you feel at the moment – after the sight of the lights, of course!

Do not underestimate the Icelandic weather, though. It is notoriously changeable, sometimes very unpleasant or even harsh. If you are not informed or sufficiently prepared for Icelandic weather, it can easily ruin your vacation. In the following guide, we have collected all of the information that you need to know before traveling to Iceland.

You will learn more about Iceland’s climatic characteristics and understand the factors that affect the seasons and the weather conditions. We will compare the average temperature, precipitation, wind speed, and the number of daylight hours during the different seasons and months. This will help you to decide the season and month that are best for you to travel to Iceland.

No one can tell you exactly what the weather is going to be like. The long-term weather forecast in Iceland is not very accurate, so there is no point of checking the forecast weeks before your arrival.

The Icelandic Met Office is the official source for local weather forecasts. Here you can check the forecast for the whole country and zoom into each region by clicking on it for more detail. You can check for cloud cover, precipitation, and wind speed as well as for the Northern Lights. The website is not very mobile friendly, but you will see it displayed at many petrol stations along the Ring Road.

Some other websites you should keep in mind and check regularly are SafeTravel Iceland and Road.is. At SafeTravel, you can check for alerts, warnings, and current conditions for some of the popular sites. You can also download their mobile app to make it easier to use while on the road. Road.is provides real-time information on road conditions, weather, and road closures. You can access webcams in different areas of Iceland by clicking the correct area on the map. You should check the road conditions several times per day when driving in winter.

Iceland is a tiny piece of land in the middle of the vast North Atlantic Ocean. Therefore its climate is highly affected by the ocean currents. Fortunately, the warm Irminger Current, a branch of the Gulf Stream, flows around the southern and western coasts of Iceland, bringing with it unusually mild temperatures.

Generally, the Icelandic climate is classified as cold temperate maritime (oceanic) climate. It has cool summers and cool winters with a relatively modest annual temperature range. There are, however, specific areas with subarctic, tundra, and highland climates that have a wider range and more extremes.

The mixture of the climatic characteristics gives Iceland very long and relatively mild winters with short, cool summers. The temperatures are close to zero for five to seven months per year, between October and April. It does not often drop much below 0°C (32°F) on the coast. Most precipitation and the strongest winds are in winter, between October and March.

What is the weather going to be like? Read on to find all the information you need.

How much daylight will there be when you are visiting?

The Climate of the Different Regions of Iceland

The Highlands are the coldest while the southern regions get the most rain and snow. The area around the largest glaciers gets four to five times more precipitation per year than the United Kingdom! The soil in the Highland tundras remains frozen for eight to nine months each year.

The Highland roads are usually only open for three months, between mid-June and mid-September. Winds can be extreme and the temperatures are usually much colder than in other parts of the country, staying below -10°C (14°F) during the winter and not often rising above 10-15°C (50-59°F) in summer.

The Seasons in Iceland

The Icelandic winter is not suitable for camping or longer hikes. It is, however, great for traveling around and staying at cozy, candlelit guesthouses, trying the local cuisine, eating hot lamb soup, and exploring the local culture. Winter is the most wonderful time to discover the world of ice: blue ice caves, lava tunnels filled with spectacular ice sculptures, rugged glaciers, iceberg-filled lagoons, frozen waterfalls, and spectacular landscapes. As well as the Northern Lights, of course.

The very short, one-month spring is in May while September is considered our autumn. The grass starts to get greener and leaves start to grow around the middle of May. In late August and September, the berries are harvested and the bushes take on beautiful fall colors. All leaves and grass disappear before October when the first freezing temperatures hit the ground.

May and September are the edges of the tourist season. The weather is better than in winter and the hotels and outings are not fully booked and they are often on sale. Accommodation and airfare prices are lower as well. This is the best time for budget travelers and for those who prefer to avoid the crowded high season.

Summer is the driest period in Iceland with only 10-11 rainy days per month falling between May and August. That makes this the best time to visit Iceland for the road trippers, adventurous souls, and outdoor enthusiasts. The landscape glows in its most vibrant colors giving travelers idyllic sights of purple lupin fields and green meadows dotted with yellow and white flower patches, sheep, and horses. The most spectacular hiking trails and treks become walkable in mid-June while the Icelandic Highlands display their unparalleled beauty.

May is the month that we call spring. The grass starts to turn green and the temperatures remain above 0°C (32°F).

The summer season is three months long. The average temperature stays above 10°C (50°F) throughout the summer with occasional peaks of around 18-20°C (59-68°F) or sometimes even 25°C (77°F). The temperatures can be much lower in the mountains and in the Highlands, though.

September is the month of fall, when the weather turns rainier and the temperatures drop slightly below 10°C (50°F) after summer.

When it comes to temperature, the actual air temperature can be very far from what you experience when you step out of your hotel. On a windy day, the moisture evaporation from your skin moves heat away from your body much quicker. This will make the air temperature feel colder than it actually is.

Iceland is a very windy country. A calm day is almost as rare as high temperatures. Therefore, when you look at the weather forecast, do not forget to take wind speed into consideration.

The large glaciers, especially Vatnajökull, can generate extremely strong drainage winds. This happens when high-density cold air from a higher elevation flows down the slopes of a glacier under the force of gravity. These are what we call katabatic winds which are quite common in Iceland. When driving the Ring Road in winter, always make sure to check the road conditions and wind speed, especially on the south coast under the glaciers.

The frequency of storms is highest between September and March. A storm is when the wind speed is higher than 65 kilometers per hour (18 meters per second or 40 miles per hour). The number of stormy days ranges between 10 to 20 days per year in populated areas, but this number can be higher than 50 days per year on the Highlands.

These extremes are not very common. But it is good to be prepared for windy conditions, especially if you plan on going hiking or camping.

The summer is relatively dry. To serve as a comparison, Iceland’s driest summer months get nearly as much rain as London between November and January. However, the amount of rain (approximately 54.5 mm or 2.14 inches per month between June and August) falls over 11 days per month, unlike London which gets the same amount of rain over 18 days. Most rain and snow falls between October and March, along with the strongest winds. 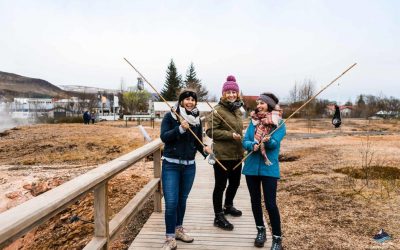 Things to do in bad weather in Iceland

The weather in Iceland is nowhere as severe as most people think, but there is a caveat! The gulf stream which keeps Iceland warmer than other lands on the same latitude can deliver very severe storms. Here are some good tips on what to do in Iceland when the weather is bad! 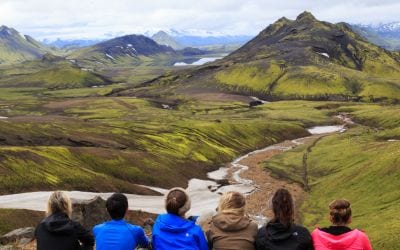 How to pack for the Laugavegur trail: The all inclusive info package

All you need to know about backing for your outdoor adventure in Iceland. The key to an enjoyable time out in the elements. 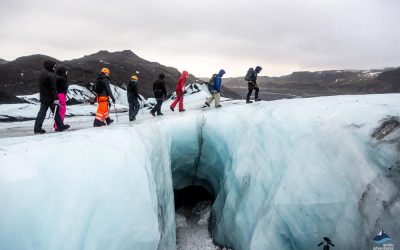 With so much to do and such little time. We’ve taken care of the planning and compiled the ultimate 48-hour adventure guide to Iceland.