The Eastfjords is a remote area in East Iceland. Explore beautiful nature in the Eastfjords, home to the country’s top wilderness! Nature-lovers flock to the area to enjoy waterfalls, lava caves, charming villages, amazing wildlife, hiking trails and so much more.

Most visit this area on a Ring Road 1 Circle road trip around Iceland.

The fjords in eastern Iceland are most often referred to as the Eastfjords or East Fjords. The area is a place filled with great views, sharp mountain peaks, incredible waterfalls, lively reindeer herds, rich history, the largest forest in Iceland and some of the country’s best folklore.

Popular Tours that visit the Eastfjords

The Eastfjords offer an abundance of charming fishing villages, with a surprising art culture and colorful cafes. They have been chosen time and again for shooting films, commercials and tv shows due to their remoteness, harsh beauty, and isolation.

The fjords all have different names but most share the same ending -fjörður meaning fjord, examples would be Seyðisfjörður, Fáskrúðsfjörður, and Borgarfjörður.

When is the best time to visit the Eastfjords?

The Eastfjords are often spoken of in Iceland as a place of complete different weather. The weatherman often forecasts a blizzard in Reykjavik but the numbers in the Eastfjords are all red and around 20°c (68 Fahrenheit).

The Eastfjords have high mountains and rough fjords and to visit will invite you in a visual adventure. To drive around the Eastfjords in winter can be quite tricky and road often get closed down due to snow but the vista is stunning. Frozen waterfalls and white covered mountains are a treat for any traveler to see and if you have the proper driving skills and equipt car it can truly be fantastic.

Visiting Eastfjords during summer certainly gives you more stable road conditions and the hiking trails and much more easy to trek. Many towns have festivals such as Lunga Art Festival in Seyðisfjörður and Bræðslan at Borgarfjörður Eystri and the life in the fjords in more colorful in general. For most Spring/Summer would be the best time to visit the Eastfjords!

Egilsstaðir – The Capital of the Eastfjords

Egilstaðir is the biggest town in the Eastfjords. It has a population of 2300+ habitats and has all the service and shops you can ask for. The town rests along the banks of the famous Lagarfljót River and is a part of the municipality of Fljótsdalshérð. The town was established in the late 1940’s making it very young by Icelandic standards but still is the often nicknamed the capital of the East.

The town has an airport, a swimming pool, a hospital, a college, low-cost shops, and nice hotels and restaurants. There are endless things to see around Egilsstaðir and the agriculture around is very linked with everyday life in the town.

Waterfalls, rivers, lava caves, mountains, and hiking trails are to be found around Egilsstaðir and for many, the area is a highlight while visiting Iceland.

Seyðisfjörður, home to the blue church, el Grillo, the harbor of the Norræna ferry (Smyril-Line) which sails from Scandinavia to Iceland and so much more. Seyðisfjörður is known as the artsy town of the Eastfjords where a community of artists has formed and every summer they host the Lunga Art Festival where people come together to seek inspiration and create art.

With a population of only about 650 people this small fishing village is still very lively and for many a must-visit place in the Eastfjords. The town has lovely restaurants, great shops and to walk it is very enjoyable.

How to get to Seyðisfjörður?

Seyðisfjörður is connected to Iceland’s Ring Road 1 at Egilsstaðir, via Route 93. Driving from Reykjavík to Seyðisfjörður straight would take about 8 and a half hours as the route is 670 km (416.3mi).

Herðubreið is a tuya, a type of distinctive, flat-topped, steep-sided volcano formed when lava erupts through a thick glacier or ice sheet which is exactly what happened when this mountain Queen formed in underneath a glacier during the last Ice Age.

The tuya sits in the Ódáðahraun lava desert close to the Askja volcano and its highest point is 1,682 meters (5,518 ft). Near the tuya lies an oasis called Herðubreiðarlindir with a beautiful camping area and some lovely hiking trails.

In the old times, outcasts who had been excluded from the society due to crimes they had committed often lived in the area, the most famous one being Fjalla Eyvindur who lived there from 1774-1775.

Borgarfjörður Eystri fjord is known as a natural paradise in the East, with a population of only about 100 inhabitants the area remains almost untouched and looks like something out of a Lord of the Rings scene. The fjord is about 4 km wide and 5 km long and very open to ocean winds.

Along the seacoast, long and fertile green fields lay and surrounding it gorgeous mountains all around. This is why Borgarfjörður Eystri is often believed to be one of the most beautiful locations in Iceland.

The main attraction of Borgarfjörður Eystri are the hiking trails which are quite magical as many believe the area to be home to elves and the queen of the elves is thought to live in Álfaborg a few minutes walk from Bakkagerði. Other great hiking spots worth mentioning are Stóruð and Víknaslóðir both locals favorite.

The village of Borgarfjörður Eystri is called Bakkagerði and the inhabitants of the fjord mainly work as sailors, in agriculture or tourism. An interesting fact about the village is that no house numbers can be found as none are needed, the locals know each house by its looks.

Borgarfjörður Eystri is also a home to a large puffin colony and by Hafnarhólmi you can find great places to see them easily accessible.

Since the year 2004 Bræðslan music festival has been held at Borgarfjörður Eystri and always takes place during the last weekend in July, many famous artists both Icelandic and foreign have taken part, for example, Emiliana Torrini, Belle, and Sebastian, of Monsters and Men, John Grant and Damien Rice. 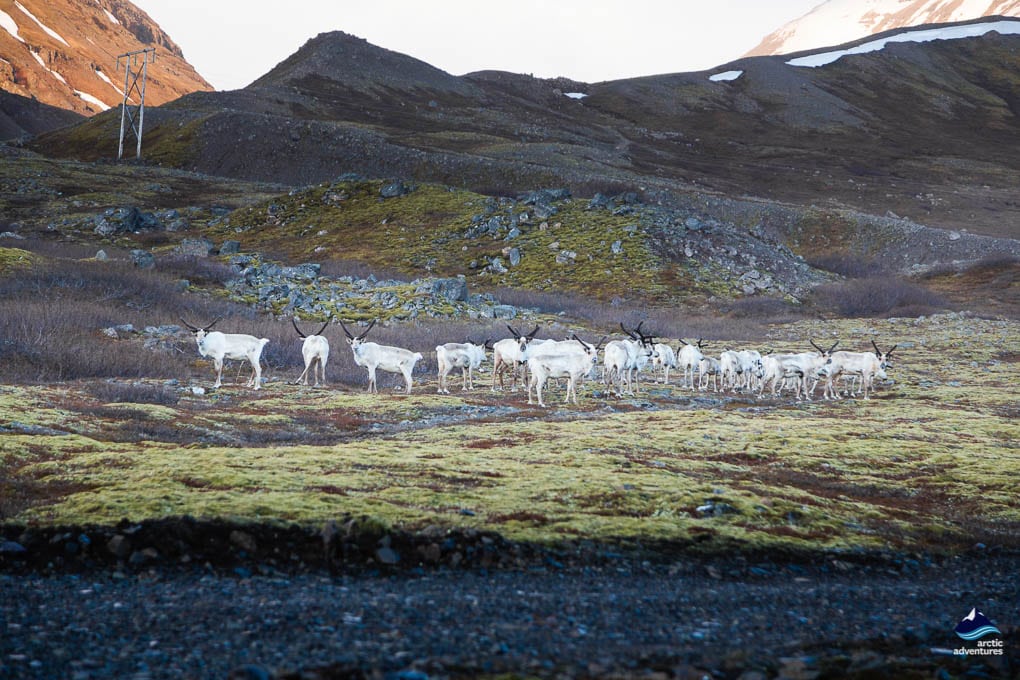 Today they can only be found in the Eastfjords, where herds of wild reindeers trek the hills. They are often spotted from the Ring Road 1 while they live in harmony with the East Iceland Nature.

Other Villages or great places to visit in the Eastfjords

On a global scale, the most famous resident of the Eastfjords is very likely the mysterious water creature, Lagarfljótsormurinn. The wyrm is believed to live in the Lagarfljót river and is Iceland’s “Loch Ness monster”. Legend says that a young girl living at a farm near the Lagarfljót river laid a slug from a bush on a golden ring in a box, she had heard that this would increase her gold and wanted to become rich.

When reopening the box, however, piles of gold were nowhere to be found but a terrifying rapidly growing slug. In complete shock, the girl threw the box into the Lagarfljót river where the wyrm only continued to grow scaring off the locals and sometimes even spouting poison over the nearby farmlands.

With the whole neighborhood in terror, a couple of Sama magicians were asked to help and they were able to chain the monster’s head and tail to the bottom of the river so that the Lagarfljótsormur would not kill anyone until Judgement day.

Museums in the Eastfjords

Accommodation and Hotels in the Eastfjords

Camping in the Eastfjords

Vopnafjörður Camping ground located high above Brekkubærin the town of Vopnafjordur.
Open: 1st of June to 15th to September
Prices:

Eskifjörður Camping Ground in the lovely town besides Bleiksár river.
Open: 1st of June to the 15th of September

Neskaupsstaður Camping Ground near Drangagil with great facilities within walking distance
Open: 1st of June to the 15th of September

Hallormsstaðaskógur Camping Ground the Atlavík camping ground.
Open: 20th of May to the 30th of September
Prices:

Djúpivogur Camping Ground midtown, walking distance to swimming pool and a 9 hole golf course. Located next to Hotel Framtíð.
Open: All year round

Berunes Camping Ground near Djúpivogur in Berufjörður and HI Hostel.
Open: 1st of April to 1st of October
Prices:

Filming at the Eastfjords

Fortitude (2014) filmed entirely in Reyðarfjörður, a small town in the Northern East fjords.

Stardust (2007) filmed at Stokksnes, a stunning location in the Southern Eastfjords.