Menu
More
Sofie
|November 29, 2019
Sofie is a free-spirited journalist from Kentucky who lives a nomadic lifestyle, and spends much of her free time in airports on layovers. Hobbies include dancing and sipping bourbon.

If you’ve ever wondered about where is Frozen 2 set, look no further than the northernmost part of the world. While the first Frozen film was based on Norway, the second installment is inspired by Iceland! Even in the Frozen 2 movie trailer you can spot 10 total references to Iceland.

Follow the path of Princess Elsa and Anna when you visit these 7 places in Iceland. Let it go!

1. Unleash Your Powers At A Black Sand Beach

Elsa at a black sand beach

When Frozen filmmakers described their trip to Iceland to the press, they emphasized that “stark beauty of Iceland” stood out. Head to black sand beaches to see why they were the perfect backdrop for dark magical scenes.

Of all the coal-colored beaches in Iceland, Reynisfjara is perhaps the most famous. Located on the South Coast, it was featured in National Geographic as one of the Top 10 non-tropical beaches to visit on the planet. From the beach, you can see stunning views and towering sea stacks.

Unless you have icy powers like Elsa, never swim in the water as the waves are quite powerful. To ensure you a safe and fun trip, join a tour group to Reynisfjara and see other highlights along the way!

2. Visit Ásbyrgi the Capital of the Huldufólk (the hidden people)

Anna and Elsa with a troll

Scandinavian mythology inspired the film’s setting, storyline, and creatures. And you can’t talk about Icelandic lore without mentioning trolls! Wander through any region of the country and there’s probably a local myth about a mischievous troll. For good mythical tales, look no further than Ásbyrgi Canyon.

Ásbyrgi, a glacial canyon in the north of Iceland

According to one myth, Ásbyrgi is the capital city of Iceland’s Huldufólk (“hidden people”) or trolls. In Scandinavian folklore, trolls were also grouped with the Huldufólk. The name most likely refers to the fact that trolls cannot roam around in the sunlight or else they will turn to stone.

Ásbyrgi Canyon is an ancient horseshoe-shaped depression in northeast Iceland. It sits on a corner of the famous Vatnajökull National Park, and holds a variety of flora, fauna and a small lake. Geologists estimate that Ásbyrgi formed around eight to ten million years ago, right after the last Ice Age.

Visit Ásbyrgi Canyon on this 7-day self-drive road trip along the Ring Road!

The Troll King has many powers, but the green, purple and red lights he conjures aren’t magic — they’re the aurora borealis. One of Iceland’s most famous natural phenomena, Grand Pabbie uses the Northern Lights to create visions and images.

But you don’t need Grand Pabbie to see the aurora! Catch this spectacular light show for yourself in the wild countryside of Iceland on a Northern Lights tour.

Our experienced guides drive groups out on super jeep tours and boat rides to view the lights. If you’re up for an even longer adventure, choose a multi-day northern lights excursions!

4. Enter the Enchanted Forest at Seljalandsfoss

Elsa and her friends standing in front of a mysterious mist

Experience magic mist and enchanted pathways at Seljalandsfoss Waterfall. Elsa and her friends had to break through a mysterious mist to reach the Enchanted Forest, you can reach these mystical falls with only a short hike.

The scenic cascade has a pathway that wraps around the falls. Visitors get a magical view of Seljalandsfoss from behind the water. Be prepared to get sprayed by the magic mist of Seljalandsfoss!

Seljalandsfoss, one of the very rare waterfalls where it is possible to walk behind the falls

Rated one of Iceland’s most picturesque waterfalls, Seljalandsfoss is a stop on most tours around the Golden Circle. Just don’t forget your camera!

5. Look for Sven in Egilsstaðir

Interesting fact: Sven’s depiction was based on the mannerisms of a dog. No wonder he’s so lovable!

Everyone loves Sven, Kristoff’s loveable reindeer friend, so why not visit the reindeer region of Iceland? Egilsstaðir is the largest town in East Iceland and the only place in the country where you can find wild reindeer herds.

Egilsstaðir, a town in east Iceland on the banks of the Lagarfljót river

The largest land mammals in the country, these non-native creatures were brought to Iceland by humans. In the winter you can observe large herds of up to a few hundred deer. Unlike the snowy environment Sven is used to, Egilsstaðir reaches exceptionally warm temperatures in summer.

Find Egilsstaðir right on the famous Ring Road tour in the Eastfjords. It’s home to amazing activities for all kinds of adventurers!

6. Search For a Nykur Snorkeling

Take on the power of the sea like Elsa on an epic underwater adventure. Search for the Nokk, or Nykur in Icelandic, among the deep blue waters of Silfra Fissure. The only place in the world where you can swim between two continental plates,  Silfra is one of the top-rated dive sites in the world.

Snorkel in the clearest water on Earth in Silfra Fissure

You don’t need to be a master diver to enjoy Silfra. Snorkeling tours are another top-rated activity for families to enjoy. Float on the clearest water in the world and peer into the mysterious sea below. You might not spot a Nykur, but you may see an array of other sea creatures!

Tunnel in Ice Cave in the Langjokull glacier in Iceland

Discover the world’s largest man-made ice tunnel on a Langjökull tour. It’s constructed a bit differently than Elsa’s Ice Palace, but this sparkling blue cave will still make you feel like royalty.

The tunnel stretches down 1,640 feet (500 meters) below the ice of Langjokull Glacier, the second-largest glacier in Iceland. This castle-like cavern includes various chambers, exhibitions, sitting areas, and even a wedding chapel! Feel free to belt out your own version of “Let It Go” from deep inside the ice.

Want to experience some of these highlights on a fun day adventure? Check out our Frozen 2 tour! 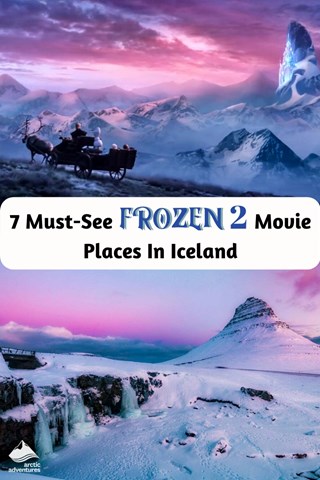 Iceland has a rich and varied history when it comes to both the big and the small screen. Many of the world’s favourite films and TV shows over the years have been shot on this mystical island, even though their storylines are not necessari...

Top Beaches in Iceland | Everything you need to know

All About the Best Beaches found in Iceland | Reynisfjara Black Sand Beach, The Red Sand Beach in Westfjords, Jökulsárlón's Diamond Beach, Grotta Lighthouse in Reykjavik and so much more. Which beaches are must visit while in Iceland and w...