A Guide to Iceland’s Glaciers

Do glaciers move?
How much land do they cover?
How are glaciers formed?
What are the different types of glaciers?
What effect has climate change had on glaciers?
How do glaciers benefit our environment?
Things to do on a Glacier

Glaciers, those magnificent frozen monuments to time, are inescapable features of Iceland. In fact, 11% of the country’s landscape is made up of these fascinating, beautiful and ever-changing wonders of nature.

Tragically, they’re diminishing just as we’re learning to appreciate them. But it’s still not too late to visit many of Iceland’s Glaciers, and to learn their fascinating secrets.

Here are a few fascinating facts about Iceland’s coolest spots…

While we (accurately) think of a glacier as ice, it doesn’t form in the way you might expect. A glacier is actually made up of fallen snow that has, over many years (often centuries), compressed into a thick and persistent body of extremely dense ice. Under the force of gravity, the ice “reforms” (or changes), causing the glacier’s (very!) slow movement of a meter a day. There’s a reason we use the phrase “glacial” for things moving slowly.

How Much Land Do Glaciers in Iceland Cover?

Glaciers can only form on land and cover about 1/10th of the Earth’s dry land. In a poetic twist, despite being only on land, they function like rivers and lakes: In fact, they carry the largest reservoir of fresh water supply in the world. And, like many bodies of water, they grow during winters and shrink during summers.

Glaciers can have a tremendous effect on their local habitats as they carve valleys, scrape the earth beneath them, and push and shove the soil below. But glaciers are also affected by climate as well as other natural factors. This is especially true for Iceland, where volcanic eruptions and earthquakes can change the shape and size of the glaciers quite dramatically over relatively short spaces of time.

How are Glaciers Formed?

For such an astounding-looking type of formation, glaciers are created in a surprisingly simple way; snowfall in the same location all-year-round. Eventually, that snow transforms into ice and each year a new layer of snow will cover and compress the older layer.

The compression then forces the snow to re-crystallize and form into “grains”. If you’re thinking of sugar, you’re on the right track: They are similar in size and appearance to sugar grains. With time, these grains will enlarge and the air pockets between them will get smaller. This causes the snow to slowly compact and the density increases.

After about two years, the snow will have turned into “firn”. This is the state between snow and glacier ice. Firn is about two-thirds as dense as water. The density will then continue to increase as, over time, the larger ice crystals become even more compressed, causing the air pockets to get even smaller.

All because it snowed in one spot all-year-round.

What are the different types of Glaciers?

You might imagine glaciers as monolithic, near-identical blocks of ice. But part of their magic is that they come in a dazzling variety of shapes, sizes and even colors.

As their name suggests, these are glaciers that develop in high mountain regions. They often flow out of ice fields that can span over several peaks or even across a whole mountain range. As you might imagine, they’re particularly awe-inspiring!

Glaciers are often compared to rivers, and it’s especially apt when it comes to valley glaciers. These bodies of ice glide down valleys and can stretch for hundreds of miles. Some locals describe their shape as tongue-like as they twist and turn their way down the valley.

Valley glaciers can flow down beyond the snow line and sometimes even reach sea level. When one flows far enough to reach the ocean, it’s often called a “tidewater glacier.” These can then become the origin of icebergs at sea where they can continue their journey for centuries under the right conditions.

Piedmont glaciers are the glaciers that spill into quite flat plains from steep valleys. They then spread into bulb-like lobes. They are simply beautiful to behold.

These glaciers are typically found high in mountainsides and tend to be quite wide rather than long. They take their pretty French name from the bowl-like hollows they occupy. In a geological sense, a Cirque is a steep-sided hollow on a mountainside or at the head of a valley, formed by (you guessed it) glacial erosion.

Ice aprons are glaciers that hang from high mountainsides and are relatively small in size. They are often wide rather than long and have been known to cause avalanches due to the steep incline which they stand against.

When glacial ice is covered by debris, it sometimes forms what we call a “rock glacier”. They are usually formed in steep valleys where both rocks and soil can fall from the hills into the ice, resembling sprinkles on an ice-cream dessert!

Ice caps, often a subject of climate-related conversation, are essentially miniature ice sheets. They cover less than 50,000 square kilometers or 19,305 square miles. Ice caps mainly form in subpolar and polar regions that have high elevation and, consequently, are quite flat.

These are quite similar to ice caps, but the difference lies in how they flow.

Like other bodies of water, the flow of ice fields is influenced by underlying topography. These glaciers are pretty easy to locate in Iceland: Langjökull, the second largest glacier in the country, is an ice field.

The word “stream” suggests a small body of water, but ice streams are enormous masses of flowing ice – sometimes close to 20 meters in width and 150 meters in length. They are quite sensitive to environmental changes such as loss of ice shelves at their terminus or a changing volume of water that flows beneath. Ice streams are set within an ice sheet, so they are surrounded by ice that is flowing very slowly.

The glacier lagoon is a unique topographic feature that only appears in certain conditions. Iceland’s most famous glacier lagoon is, of course, Jokulsarlon, which flows from the glacier tongue known as Breiðamerkurjökull in Vatnajokull Glacier National Park. As the ice crumbles into the ocean, it melts into icebergs, creating a pool of floating blue and white chunks of ice streaked with ash.

What effect has climate change had on glaciers?

Thanks to climate change, it’s no secret that glaciers around the world are receding at an alarming rate. In 2014, the Okjokull ice cap melted away completely, the largest disappearance (but by no means the only) of a glacier in Iceland. Since then, it’s been stripped of its suffix jokull (“glacier”), and is now known simply as Mt. Ok! According to some researches, deglaciation in Iceland occurs at a rate of about 40 square kilometers per year. 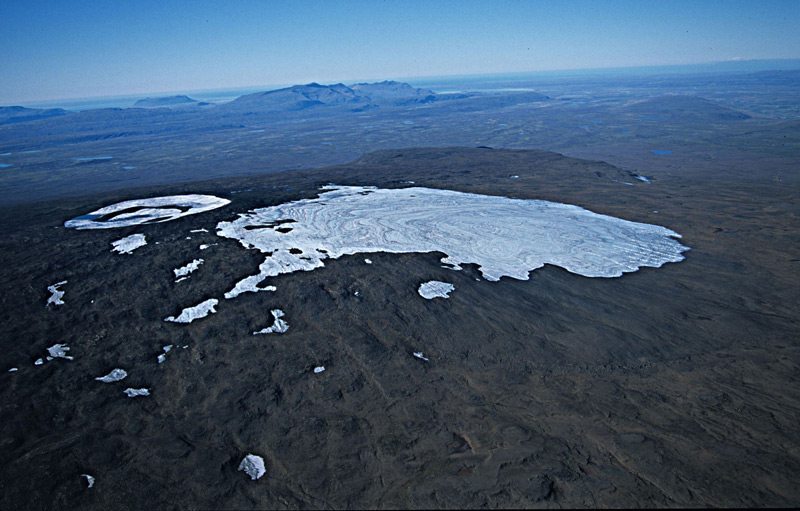 Satellite imagery shows that the Helheim Glacier in Greenland did not alter between 1950 and the year 2000. However, by 2005 this glacier was retreating an astonishing 110 feet per day. Tragically, some glaciers have been declassified as such because they ceased to satisfy the defining criteria, particularly in terms of size. Climate change scientists are predicting the disappearance of many more glaciers over the next twenty years.

The decline of polar bears swimming ashore is also a big indicator of Icelandic climate change. We only have to look to Landnámabók (The Book of Settlement), an Icelandic Saga, to see that polar bears used to cross the pack ice from Greenland on a regular basis.

During the big Frost winter of 1917-1918, 21 bears were listed and it’s fair to say that more arrived unlisted or undetected. Since 2000, the reduction in pack ice has changed things: Now, in a typical year, there are no visiting bears. In 2016, just one polar bear made her way ashore – the first known visitor for several years.

There is hope, however. Last year, scientists projected that Iceland’s glaciers would, in fact, increase in 2019. It would be the first time the glaciers didn’t shrink in 25 years. This growth is mostly because Earth’s climate is cyclical, meaning there are warmer periods and colder periods. Though we are still on track to lose many glaciers in Iceland overall, for 2019, at least, there will be some recovery.

How do glaciers benefit our environment?

Even from a purely aesthetic point of view, glaciers are of immense value – crystal structures that you can admire from a distance or up close as you’re walking on (or even through!) them.

However, there is a lot more at stake here than the loss of natural beauty. Glaciers and sea ice perform an important function when it comes to holding back the pace of climate change: Melting glaciers cause sea levels to rise, playing havoc with the planet’s ecosystem; and accelerating the influx of fresh water to oceans and threatening corals, fish, and local wildlife.

Like many of our planet’s treasures, glaciers give us far more than we realize.

Things to Do on a Glacier in Iceland

Iceland’s glaciers are some of the most accessible glaciers in the world. Explore the top of a glacier and all its nooks and crannies on glacier hike. Delve deep beneath the ice in a spellbinding ice cave. Zoom through the snow in Iceland’s icy wonderland. You can even go sea kayaking among the icebergs!

One of the most popular activities in our repertoire is the glacier hike in Iceland. A certified glacier guide can introduce you to all the special features of an ancient glacier. From soot-streaked ice formations to deep crevasses, discover the unique Ice World on top of a glacier. Our glacier tours hike on Vatnajokull glaciers and their outlet glacier tongues like Solheimajokull.

Without glaciers, of course, we wouldn’t have ice caves as well! As glaciers shift and melt, the meltwater runs through the weak parts of the ice, leaving behind a cavern or tunnel that runs through the glacier. These gaps are known as ice caves and are often large enough to explore. From October to April, ice caves tours are one of the most popular activities in Iceland.

Another wildly popular activity you can enjoy year-round is snowmobiling on top of a glacier. Thrillseekers can snowmobile on the surface of several of Iceland’s glaciers. Langjokull is a few hours’ drive from Reykjavik and makes a terrific day trip. Another popular destination for snowmobiling is Vatnajokull, where you can combine snowmobiling with glacier hiking, trekking, or visiting Jokulsarlon Glacier Lagoon.

Did you know that you can sea kayak in Jokulsarlon Glacier Lagoon? The protected waters and floating giant icebergs make this an activity worth exploring. Grab a paddle and wander among the huge icebergs, dressed in brilliant blue, dazzling white and ashen charcoal. Keep your eyes out for a friendly seal!

Join an adventure that begins with a glacier walk on the icy slopes of Solheimajokull Glacier, followed by horseback riding across a black sand beach.