A geothermal landscape surrounded by Glaciers

Hidden away between two gorgeous glaciers is Hveravellir. A nature reserve enriched with natural hot springs, hiking trails and a natural geothermal pool.

Nested between two large glaciers, Langjökull and Hofsjökull, is the hidden gem known as, Hveravellir Nature Reserve. Also known as The Hot Spring Fields, Hveravellir is a great way to immerse yourself in nature. Located in the central highlands, this geothermal area sits an impressive 650 meters above sea level.

Bathing in the hot pool, walking over a lava field and hiking the trails are all part of the experience when you visit Hveravellir.

Having both hot and cold water flowing to the pool is a great natural way that the temperature of the water is kept regulated. Due to the fast pace of the water flow means, that there is a constant supply of clean water. This relaxing pool is scientifically proven to hold medicinal properties, so what better way to relax and unwind.

It is worth spending a day visiting Hveravellir because there is so much to see and do. So clear your head, take a moment and take in the sights of this amazing natural thermal pool. 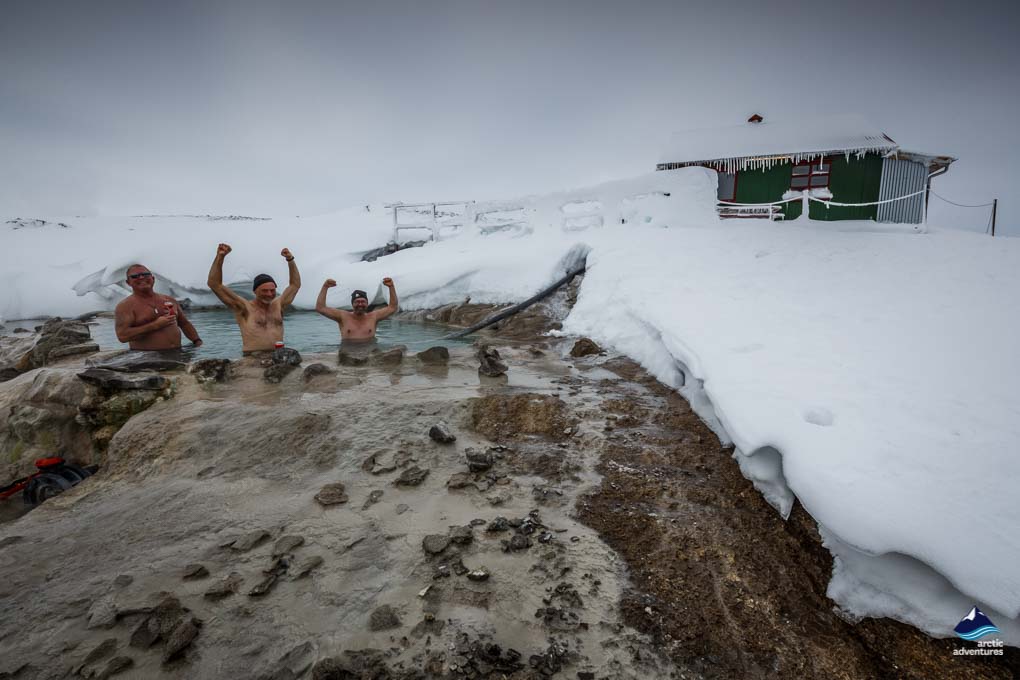 The history and use of Hveravellir

Previously named Reykir, Hveravellir was used as part of the greenhouse industry, utilizing the heat from geothermal energy. In 1970, it became a source of hot water for the town of Husavik. Later in the 1990s, the geothermal water was used for electrical production and now provides Husavik energy company with steam, electricity and heat.

Icelandic history tells of a tale about an outlaw and his wife. It was said that a stranger called ´Kari´ moved to a farm in the north of Iceland and took on the role as a laborer. A widowed woman called Halla owned the farm and fell in love with this man. This made the local bailiff very jealous as he was set to marry her. It came to the attention of the bailiff that Kari, was, in fact, a fugitive named Eyvind and was living a fake life. Kari denied all knowledge of this person and to prove his sincerity, he was challenged to beat the bailiff in a wrestling challenge. He won.

Halla proposed to Kari and as the guilt consumed him, he was forced to confess his true identity as Eyvind. Knowing that the bailiff was coming to arrest him, the couple fled to the freezing central highlands and lived happily for many years. The couple gives birth to a baby girl and were kept company by a friend names Arnes.

Three years later it came as a shock when Arnes confessed his love for Halla. However, the feelings were not reciprocated, and with that, he decided to leave. When doing so, he was met by a group of men who were on the hunt for Eyvind. In a flurry, Arnes ran back to warn them but it was too late and a fight broke out. Halla panicked and threw her baby off of a cliff and into a river in the hope she would not be captured. Both Halla and Eyvind survived and fled to a small cabin where they became hysteric with hunger. One day Eyvind went in search for firewood and returned to find Halla frozen. He held her until eventually dying beside her.

This tale of runaway romance depicts a real-life version of Bonnie and Clyde meets Romeo and Juliet.

GPS N64° 51′ 58.804″ W19° 33′ 42.403″
As mentioned before Hveravellir is situated between two large glaciers called Langjökull (meaning Long Glacier) and Hofsjökull (meaning Temple Glacier). It is also on the edge of an 8000-year-old Lava field named Kjalhraun. Being in the west highlands means that Hveravellir is some distance from Reykjavik and is about a 3 hour and 45-minutes drive. It can be found on the Kjolur route and is in the middle of Reykjavik city and Akureyri town. 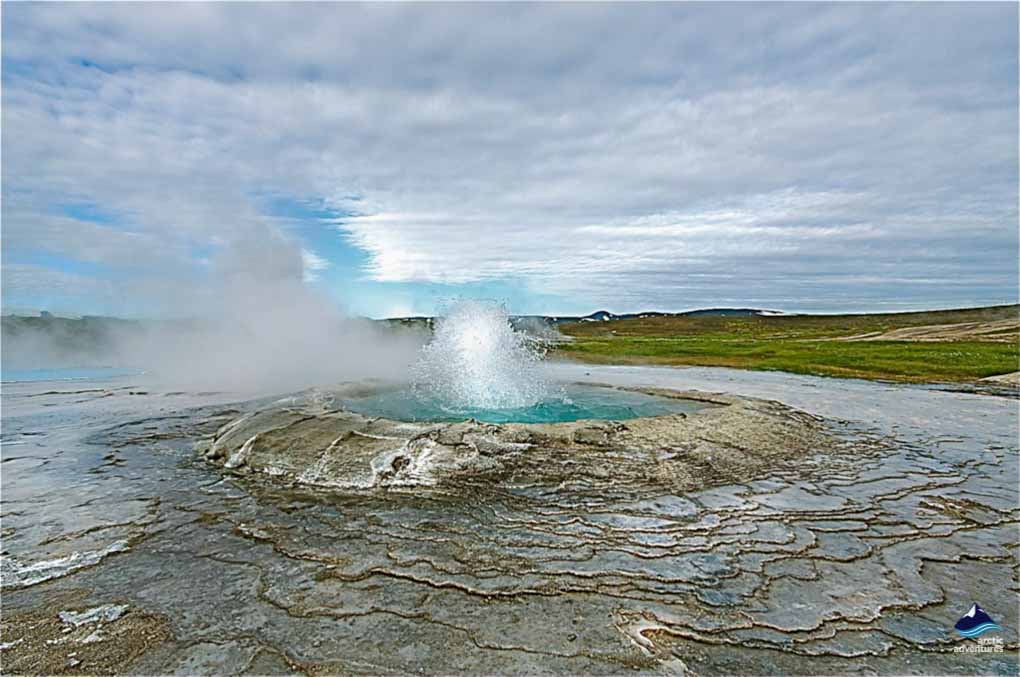 How to get to Hveravellir

It is possible to get to Hveravellir by both bus and car, however, it is essential that you have access to a 4×4 when using the car route. From Reykjavik, Gullfoss is the place that you need to head towards. This is a great way to start your journey as this is one of Iceland’s most famous waterfalls. From here you will need to take road number 35. This will take you over the Kjolur mountain road. Following this, you will merge onto Ring Road 1. About 90 km away from Gullfoss you will come across a sign for Hveravellir, this will inform you that your destination is about 2 km away.

Hveravellir can also be reached by bus, however only in the summer months. The Nordurleid bus company has services that departs from both Reykjavik and Akureyri, depending on the direction you are coming from. 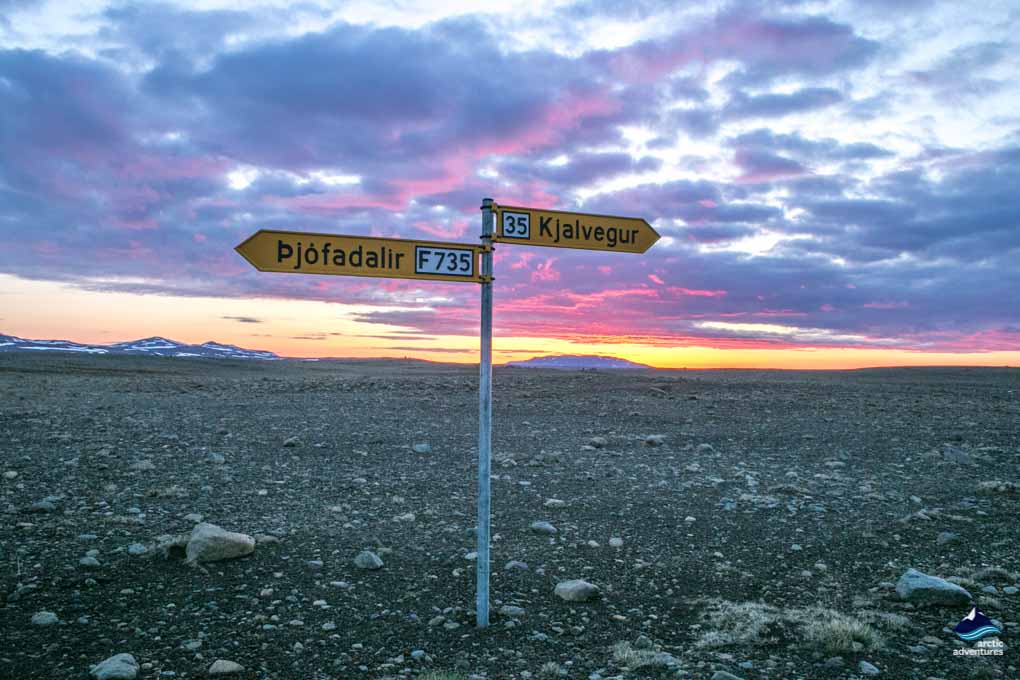 What to expect at Hveravellir

After encountering a rough terrain ride to Hveravellir, you’ll find the polar opposite feeling when you are enjoying the serene landscapes that you are swallowed up in. One hot spring is named Öskurhóll, also known as the Roaring mound that grumbles deep within the ground. After understanding the story of Eyvind and Halla, you will feel much more appreciation for the hot spring Eyvindarhver. This was used by the outlaws to cook their food on in the years they lived happily here. The list of hot springs is extensive including Fagrihver, the lovely hot spring and Grænihver the green hot spring. Try to keep an eye out for them all! 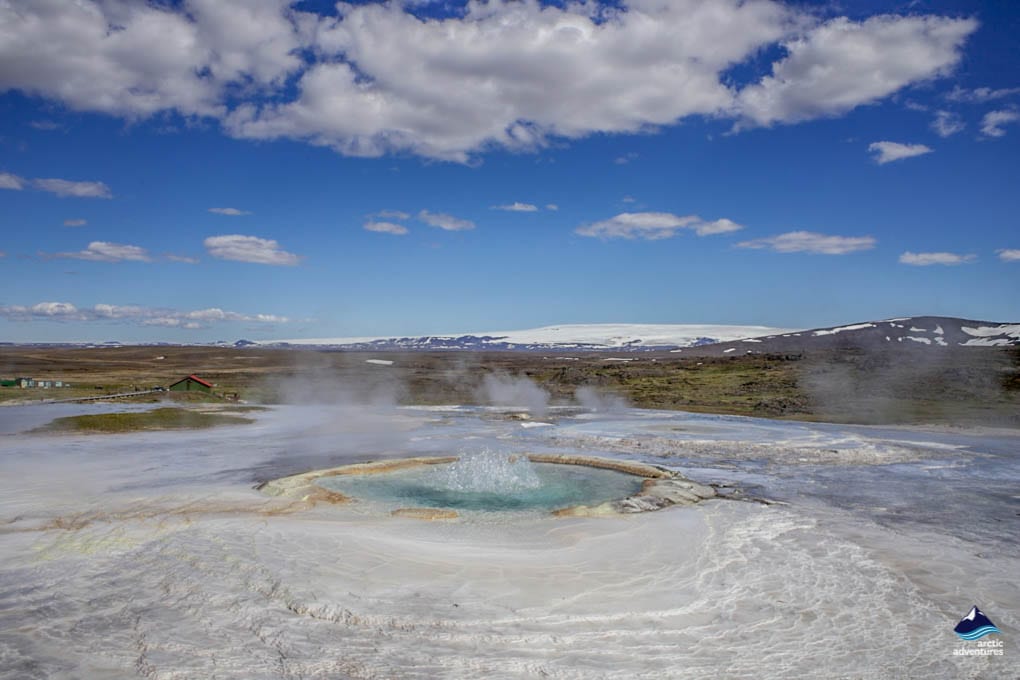 Hiking around bubbling fumaroles and hot springs will leave you ready to dip into the geothermal pool and using it as a relaxing way to unwind. The temperatures vary between 18 and 39 degrees Celsius, depending on all types of weather aspects. The pool was created due to a dam being built in the 1950´s, and thank god that they did this so that we are able to enjoy the waters the glaciers have to offer. 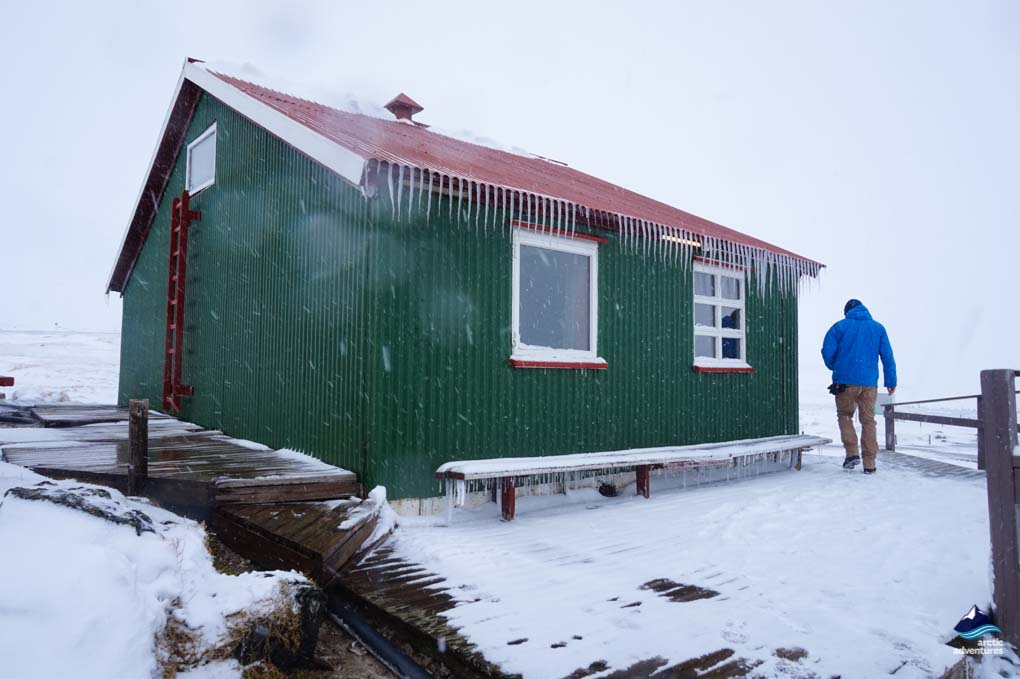 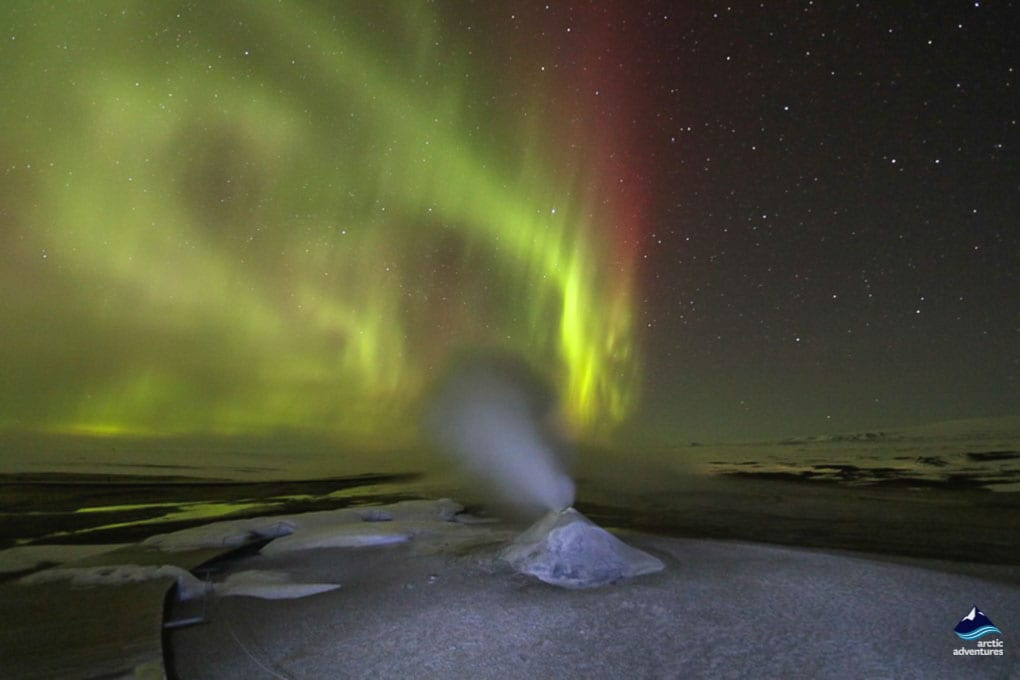 Hveravellir in the winter seasons is a beautiful and magical experience. The rugged highlands mixed with the snowy glaciers and frozen rivers will leave your eyes wondering where to look next. Engulf yourself in the beautiful geothermal area and forget that the cold even exists! Where else in the world can you witness your imagination come to life? 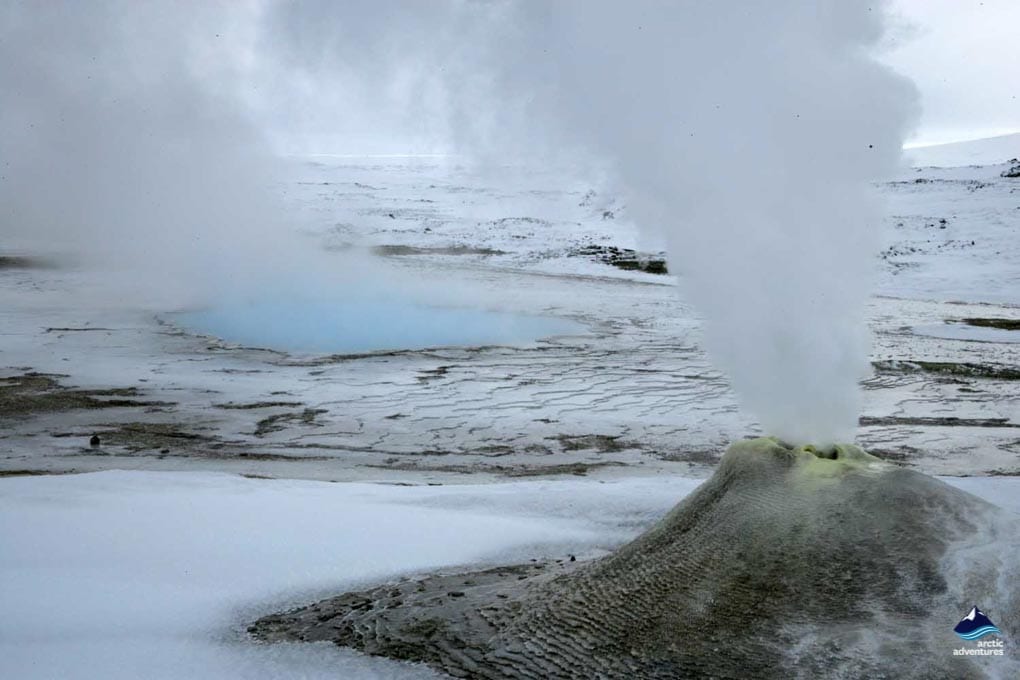 Interesting places to visit near Hveravellir