Menu
More
Sofie
|July 15, 2020
Sofie is a free-spirited journalist from Kentucky who lives a nomadic lifestyle, and spends much of her free time in airports on layovers. Hobbies include dancing and sipping bourbon.

For the second year in a row Iceland has earned the top spot on the KidsRights Index, a list that ranks how well countries guarantee basic rights for kids.

KidsRights is an international non-governmental child rights organization that promotes the rights of children through advocacy, research and financing of local projects. Their index report is the only annual global ranking on how well countries worldwide are using their resources to support and adhere to children’s rights. Research for the list was a collaborative effort with the Erasmus School of Economics and the International Institute of Social Studies.

Alongside Iceland in the top five spots were Portugal, Switzerland, Finland and Germany.

While the top 20 rankings went primarily to developed countries, economic status does not guarantee better implementation of rights for children. The United Kingdom and New Zealand ranked 170 and 169 respectively on the list of 181 countries, attributed to discrimination against children from minority groups such as refugees or migrants and policymaking concerns.

The founding chairman of KidsRights, Marc Dullaert, said: “Well-performing countries are worthy of praise. Lower ranking countries can take an example from the decisiveness of countries like Thailand and Tunisia.” In the 14th and 15th positions worldwide, they were the only developing countries ranked in the top 20 of the index. Efforts from their governments to draft legislation in line with the United Nations CRC contributed to their position.

Chairman Dullaert reported the COVID-19 pandemic has had a serious impact on children’s rights around the world.

Healthwise, children tend to be less directly affected by Covid-19, but KidsRights predicts negative consequences in areas of education, safety and child rights environments. Global lockdowns have already led to a severe increase in domestic violence and abuse towards children.

Although the 2020 Kids Rights Index doesn't reflect these effects, the organization says they will be monitoring them in the years to come.

Countries with effective management of coronavirus could have a significant influence on future scores. Predictions are that strained economies will cause countless children to experience extreme poverty and extended school shutdowns will lead to increased school dropout rates.

Iceland has been a global leader in COVID-19 responses, with the highest per-capita testing rate worldwide. 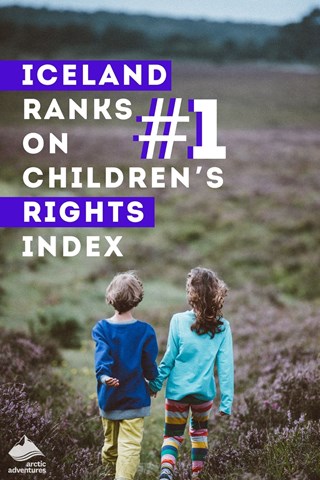 Icelandic nature is even more unique than you might think. This isn’t only from the eye or through your camera lens, but also according to science! Iceland’s geography, geology, and biology is among the most unique in the world. In fact, i...

Explore the biggest small country in the world

There are endless reasons to go to Iceland. There’s no question why everyone is travelling to Iceland these days — the country has long been known for its stunning landscapes. Beyond the scenery, however, there are many other things that ar...

Responsible Travel in Iceland: How to be Friendly to Nature

Responsible travel, while similar to sustainable travel, is not exactly the same thing. A responsible traveler is one who considers not only the protection of nature but also of the local culture and economy of the country before setting of...