Hike up to Geldingadalir to see an active volcanic eruption

Join us on this once-in-a-lifetime experience to hike up to Geldingadalir to see an active volcanic eruption. This truly is an experience that you will never forget!

Eruptions are rare events, and they are very hostile in nature. This element of rarity, the sheer power, and the potentially destructive forces behind eruptions make them hypnotically fascinating. Not all eruptions are created the same, some spew ashes far up into the sky while others pump out molten magma. Think, liquid rocks!

This tour combines the hike with the Reykjanesviti Lighthouse which is the oldest lighthouse to be built in Iceland as well as visiting Gunnuhver geothermal area and the Bridge Between Continents.

BOOK WITH 10% DEPOSIT
Worried that your travel plans might change? Book your tour more than 21 days in advance with a 10% deposit & pay the rest 14 days before departure. Alternatively, you can pay full price and get a 5% early bird discount! Contact our customer care to use these payment options. 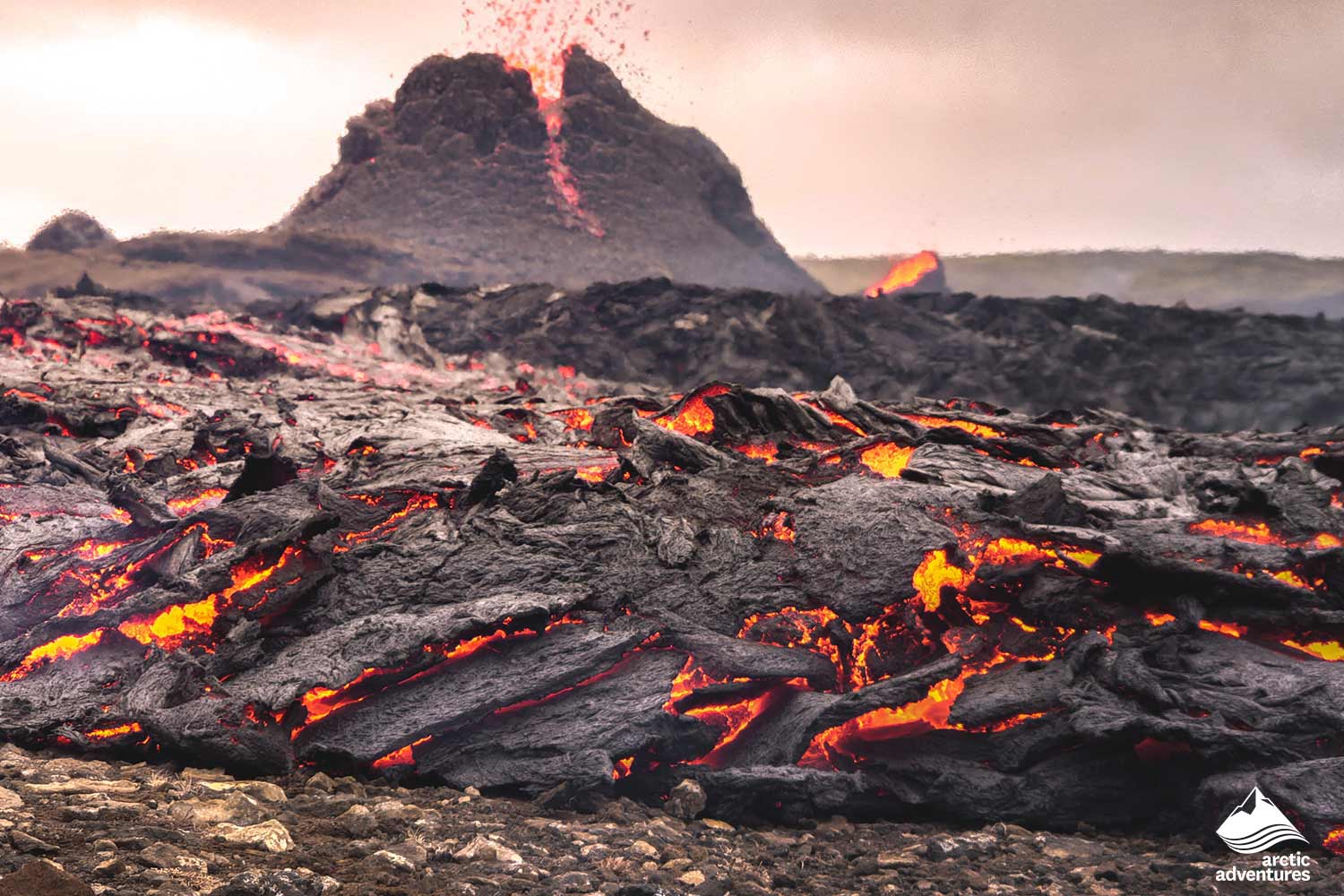 After thousands of earthquakes over the span of 3 weeks originating in the Reykjanes Peninsula, the lava finally found its way through earth crust on the evening of March 19th close to Fagradalsfjall, in a valley named Geldingadalir. The eruption is confined to this valley, which is surrounded by hills and higher ground, preventing the lava from flowing to nearby towns or cities.

Geldingadalir valley is not a remote valley by any measures. It is a mere 9 kilometres from the nearest village, Grindavík. This makes the eruption site very accessible to people that are willing to make the effort of the hike to witness this magnificent spectacle of nature. If anything should be on your bucket list, it is to experience a live volcano, where you will truly see new land forming. Streams of lava flow from the volcanic cone and into the valley, slowly but surely filling it up, you will see steam and gases rise from the growing lava field as well as the newly formed crater.

Please note: Arctic Adventures reserves the right to adjust the itinerary and/or take different routes depending on conditions.

Do I need to bring lunch/food with me?

You can bring it with you, but we do also stop for lunch in Grindavík where you can buy snacks as well for the hike. Please note though that food is not included in the tour.

Is it possible to go to the restroom during the hike?

There are no restrooms at the area just nature 😊 We do recommend that people use the restrooms in Grindavík where we stop for lunch before we start the hike.

Is it safe to hike up to the eruption site?

Scientist and the Department of Civil Protection and Emergency Management are always monitoring the area closely and informing the public if there are any updates. The area is open to the public but that can of course change with little notice. The safety of our passengers is our number one priority therefore Arctic Adventures will follow the instructions coming from the authorities but as of right now the area is open and is not considered to be dangerous to the public.