We are keeping you updated on Iceland - Here are random news and everything you really don't need to know BUT might want to!

We are starting a new segment, very randomly, basically just every now and then we will post What’s up Iceland, this will be a segment with the latest in Iceland. Happy news only and something to add to your day. Everything you don’t need to know but might enjoy. Here it is your useful (but maybe not so much) news segment about Iceland.

1) The first Cat Café has opened in Iceland, it’s located at Bergstaðastræti 10a and the cuteness is overwhelming! More info here on their Facebook page.

2) Ernir, an Icelandic Domestic airline that has been in the business forever 50 years now just hired their first female pilot, Birna Borg. Birna is quite young only 22 years old but has been the highest in her class and the company is really excited to have her on board. We are looking forward to flying with Birna!

3) Pets are as of today (1.March) allowed on the Public Busses, in Icelandic Strætó. This has been a big fight for non-auto owning pet owners and we celebrate the victory with them!

4) Today 1.March is the National Beer Day in Iceland. Beer was banned in Iceland in the early 19th century but the ban was lifted on the 1st of March 1989. Icelanders have ever since celebrated the beer day with great discounts and a lot of “SKÁL-ing” – Join the party!

5) For the past two weekends, Icelanders have been hosting a semi-final for the Eurovision song contest, which is a huge thing in Iceland and most everyone gathers to watch! On Saturday 3rd of March, the final song will be chosen that will represent Iceland in the competition in Portugal in May.

6) Our first lady Eliza Reid showed up last week at the Edda awards (The Icelandic Oscar’s) wearing a jacket from the Red Cross store. This is very typical for Eliza who along with her husband are known for being modest and relatable.

7) Five refugee families just arrived in Iceland a total of 21 people who will be settling in Iceland. They are a part of the first round of refugees which the government is inviting to live in Iceland. In total 52 people have been invited to move to Iceland this year. The families will be moving to the Westfjords. We welcome them and wish the best of luck – Velkomin!

8) The Food and Fun Festival takes place in Iceland over the weekend so most restaurants in Reykjavík will have a special menu and many will have famous guest chefs coming in. This means delicious food but also that you will probably need to book your table in advance. 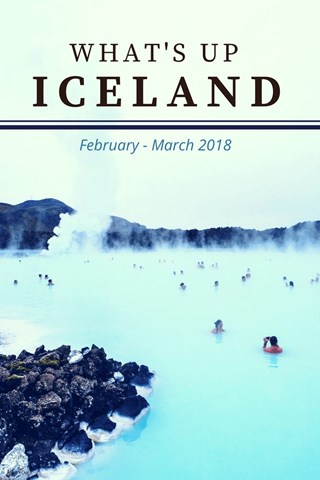