10 THINGS I MISS ABOUT ICELAND WHEN I’M AWAY

Oh Iceland, the tiny little island in the North no one knew existed

…until we went completely bankrupt in 2008 and then stopped almost all air traffic in the world in 2010 because a glacier (that turned out to be a volcano) decided to erupt.

Let’s just say, we got famous for all the wrong reasons. This place, I so proudly call home, is actually a pretty awesome thing.

I mean what’s not to love; We have glaciers, volcanoes, thirteen Santa clauses, delicious food, amazing beer, the first female democratically voted president, swimming pools in every town, great bands and singers, no army and during summers we have 24/7 daylight.

As a kid I could drink from the rivers we played around in the middle of the lava field my neighborhood was built around, I had friends who were elves and it wasn’t considered weird and horses and sheep lived about 500 meters from my school. Note that my hometown is not in the countryside it’s Hafnarfjörður only about 10 min from Reykjavík, one of the largest towns in Iceland and considered a part of the greater capital area.

My childhood was a dream.
Living in Iceland actually sometimes feels like it.

So it might not come as much of a surprise that when us, Icelanders, leave this icy rock, we miss it, sometimes even a lot.

But there are different things we miss. Oddly it’s not the thing you might think it is.
Here my missing when away from Iceland list:

1 The wonderful fresh and clean water

Oh the joy of taking a sip after a long holiday abroad. Drinking a gallon of water and taking long, long showers. Experiencing every nature lover’s dream on every hike by filling your water bottle in a river running by.

2 The Icelandic words that don’t exist in any other language.

Words like að nenna, jæja, skammdegi and so many others.*

*Að nenna = basically means that you feel like you want to do something in that matter that you can be bothered to do it. It’s pretty hard to describe but it’s often used to describe that you don’t want to/can’t be bothered to do something. Basically “Ég nenni ekki”. I suggest you English speaking people take up this words in your language. It’s a great word!
Jæja = It’s a special word to say well now, it’s time to go, time for a change or just “it’s time”. Often used in situations like when you are at someone’s home, you have had a great conversation but then there is this point where you both feel it’s time to end the visit. You or the other person says “jæja” and you both know now it’s time to do stand up.
Skammdegi = Rough translation > Short day. This is a word used to describe the short winter days. Iceland is a country of extremes. During summertime, we have only light but it comes at a prize and it’s full on darkness during wintertime.

This ice cream swirl captured my heart at a young age and this love is strong. It’s ice cream, candy, fruits and pretty much anything you can think off put together and mixed in a machine until you have the most delicious thing you will ever encounter. Bragðarefur actually translates tasty fox or tricky fox, since in Icelandic it’s the same word, no one really knows.

4 How safe Iceland is

Not having to worry about your bags getting stolen all the time is a wonderful comfort. We often ask random strangers to look after our stuff and leave our stuff unattended when going to the bathroom or sometimes even further. Crime rate, in general, is low. So enjoy not having to worry, at all.

Icelanders are only about 340.000 people, in TOTAL (no I am not joking) and the country is 103,000 km2 (40,000 sq mi) so you do the math. It’s wonderful to walk around, being able to swing your hands, skip or just whatever, always. You can skateboard down the busiest street in the capital without having the danger of bumping into anyone. You can drive for an hour without seeing a house. Enjoy!

When stepping out of an airplane after landing back in Iceland I always take a nice, long, and deep breath to take in all this fresh, clean, light and juicy air that Iceland has to offer. It’s often quite windy in Iceland we like to complain about it so us Icelanders tend to take this for granted but after having to breathe in anything else this is just heavenly.

The commute is so easy and quick, again we aren’t that many and the space and all that makes the time it takes to get from A to B wonderfully quick. Unless it’s winter and a lot of snow, maybe not then. But most of the time.

8 The peace and quiet

Don’t get me wrong the nightlife is buzzing during the weekend and we are not the most silent people but the nice and wonderful calmness of everything is wonderful and missed when away.

The 1st of March 1989 the legendary beer ban was lifted in Iceland and we have pretty much been celebrating ever since. I think that because of the ban we value the fact that we can not only drink but also make beer so much. Again also, all the fresh water makes it even better. There is just something about the Icelandic beer, it’s the best!

Icelanders are really good at making amazing dishes and the ingredients are super fresh. We pretty much only live on the coastline so the fish is always fresh and almost none of the meat in imported. We have greenhouses to grow our greens geothermally and we have mastered the hot dog.

The Bæjarins Bestu hot dogs are world famous for being a #must do in #Iceland. Have you ever tried one? 🌭 // photo by @itskellydonegan 📸 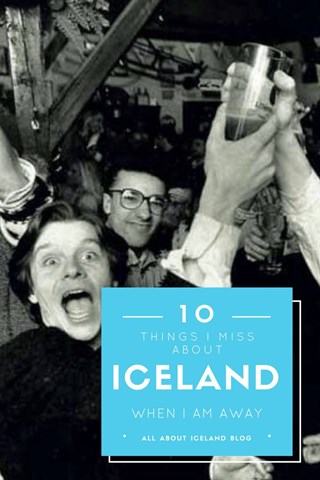 What is the deal with Icelanders and their hot dogs?

On the morning of the 12th of December, Icelandic children will wake up with a smile on their face and butterflies in their bellies, the reason? Yule Lads or like we like to call them in Icelandic Jólasveinar! And not only are there 13 of t...