All About Icelandic Names

General About Names in Iceland

Icelandic names, not that’s a category that we get asked about and there is no lack of interesting answers. As an anthropologist, interested in anything relating to humans, history and regulations this particular subject has always been an interest of mine. Come to think of it maybe it is because of the fact that our naming system is so different from what other nations are used to. We don’t have family names, you cannot name your child whatever you want and marriage means not altering one’s name.

The original names in Iceland were those of the Nordic people. The original settlers had names you can still see today such as Ingólfur (male), Björn (male), Auður (female) and Hallveig (female).

Once the settlers had arrived and started their lived here they started making new names. This often meant putting together or taking apart other pre-existing names or simply starting to use words that already existed. This is very evident for example with the name Jökull e. Glacier. None of the settlers carried this name but once in Iceland, the land of glaciers, it became common.

Later, with Christianity, came an influx of new names such as Rakel (female), Jósep (male), Marteinn (male) and Pétur (male). These names are still carried today and simply mixed into the already established name list.

The naming system was like most everything having to do with the Icelandic language very well preserved and not influenced by any outside factors due to the country’s isolation. This means that some names that the settlers carried to Iceland, faded out on the other, more metropolitan, Scandinavian countries but lived a fruitful life here in Iceland. Others, that prospered all over Scandinavia you will often see in a different form in Iceland than in let’s say Denmark or Sweden. This often had to do with the letter R at the ending of a name. In the oldest of records, many names are written with an R in the end. Icelanders took these names and added a U in front of the R but the rest of Scandinavia simply dropped it. An example? Olafr: Icelandic = Ólafur Scandinavia = Olaf

Now let’s jump to the 18th century. Icelanders had now started to travel more and more and as a result, influenced by other nations at a much larger scale. This, of course, affected the naming system like everything else and at this point in time, you can see new names, popular for example with the royals popping up in Iceland. Examples here would be Viktoría and Georg.

Today we see those same influencers as we have seen for quite a long time. They come through books, magazines, television and outstanding personas. The tv series FRIENDS, for example, set off a remarkable peak of the name Emma and Diana was popular when Princess Diana was making her mark.

Now we have covered the first names quite a bit, from Vikings to superstars and it’s time to take on the most common question. What about the Icelandic last names?

So How Does the Icelandic Last Name System Work?

As we have been doing throughout this intro to Icelandic names I will give an example.

A man and a woman get married. The man is called Egill Jónsson and the woman Selma Traustadóttir. Once they are married this will not change, they both keep their names just as they are. Now let’s say that Egill and Selma have a baby boy. They name him Gunnar and his last name is then because his dad’s first name is Egill, Gunnar Egilsson. A few years later they have a baby girl. Her they name Helga, her name is then Helga Egilsdóttir. The reason for the change in the last name is their gender. The ending -son is for boys and -dóttir for girls.

If this is sounding confusing let’s put up a family tree:

Here we follow the story to the next generation but Gunnar meets Þóra Snorradóttir and they get married, again no name change happening and have a baby girl. She is named Ragna. So, what does the system tell us? Ragna is the daughter of Gunnar so Ragna will be Gunnarsdóttir.

So to sum it up: Yes, Icelanders have last names but no, they aren’t like regular family names.

The Icelandic Naming Committee | The best or the worst?

The fact of the matter is that in Iceland you can not name your child whatever you desire. If you, for example, want to name your child Jennifer, something which has never been done in Iceland, you will need to go through Mannanafnanefnd, or the Naming Committee, to get acceptance. The committee is made up of people in the academic world, lawyers and scholars who are deemed fit to rule in each case and do so according to laws from 1996. Laws who many think are outdated.

The laws they follow in their ruling basically say:

Note: If the name has been used before you have no trouble using the name again and can name your child easily without any interference from the committee.

The very existence of this committee has been criticized a lot in recent times. Some argue that we need to keep the committee for the sake of our language but others that the committee is breaking human rights with their denials. Whatever opinion you might have it is always fun to see which names are being accepted and declined!

Fun Fact: if you can find the name you are applying for in any Icelandic literature from settlement to modern times the name is automatically allowed. This was the case with the name Refur e. Fox but it was unused from settlement until 2010 when a baby boy was given the name. It had then been unused 1020 years! 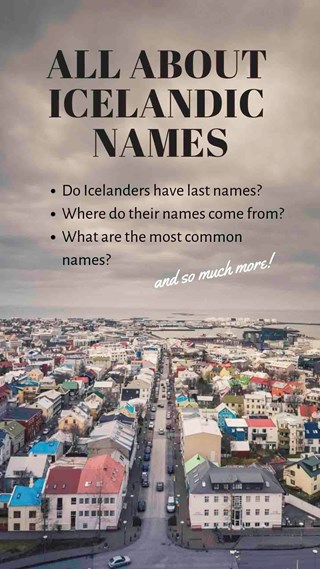 The Complete Iceland Road Trip Along the Ring Road

The Complete Iceland Road Trip Along the Ring Road

At first glance, the Icelandic language can be a little intimidating. Some words seem to trail on for miles. And many letters in the Icelandic alphabet are strangers to English speakers. However, it’s not as tricky as it first appears. Read...

Origin, Phrases and where it stands today

Icelandic, the language of Iceland is one of the most difficult languages one can start to learn. Its miraculous ways of changing each and every word into numerous different forms to make it fit into a sentence will confuse even the brighte...