Origin, Phrases and where it stands today

Icelandic, the language of Iceland is one of the most difficult languages one can start to learn. Its miraculous ways of changing each and every word into numerous different forms to make it fit into a sentence will confuse even the brightest of minds.

But what is this language, spoken by the Vikings and still today hundreds or even a thousand years later remaining almost completely untouched and so deeply rooted in the history of Iceland? Let’s find out!

What is the main language spoken in Iceland?

Icelandic is the most similar language to the old Norse-language as it has been the least influenced by neighboring countries and visitors. At least until now.

In the digital age, we live in there has been a slight change. First, when television came onto the scene it was easy to control it and uphold language purism to a certain degree. The material was made in Icelandic and the rest had subtitles. Children’s programs were even dubbed. But with the newfound Youtube, Netflix and other platforms, people and children can more easily find entertainment in English and without any traces, dubbing or subtitles to remind them of the mother tongue. This is worrying for a small nation speaking such a rare language. There is a great shortage of proper Icelandic language in the digital world and that is a fact. This has also caused us to adopt more foreign words without a proper translation.

Iceland was settled in the years 870 to 930 and the majority of the settlers came from Norway with a mixture of Swedes and Irish. The Irish, mainly due to the fact that the Vikings made a stop in the British Isles on the way to Iceland and sadly, kidnapped some women. This is basically where Icelandic language history begins.

The language which became the most dominant in Iceland was that of the people from Western Norway. It is an Indo-European language belonging to the North Germanic Languages.

There is for an example an agreement in the academic world that a considerable part of the Iceland immigrants were of Celtic heritage (based on Anthropological studies they comprised somewhere between 10% and 30%). Icelandic has, therefore, some “loan words” and a few names for people and places that are of a Celtic origin and although this is not very common, most of these are still used today and have a place in the Icelandic language’s origin.

So as you can read from this Icelandic and Norwegian were basically the same in the beginning and this is one of the reasons many still believe us, Icelanders to speak the old Nordic language today. The languages didn’t begin to differ until well into the fourteenth century. From then onwards the two languages took very different paths and are today very different.

Iceland was an isolated island but Norway has close neighbors, Denmark and Sweden and the Norwegian language was greatly influenced by these neighboring countries’ languages.

Icelanders also in the 12th century began a great tradition of writing, writing down history including poems, stories of people, natural changes and anything one might find interesting. The Icelandic literature, also known as the Icelandic sagas, helped to preserve the language and many of these books or skins still exist today, they are readable by most modern Icelanders. With this national characteristic came great pride, a need to hold on to the Icelandic language roots and much resistance to any change of the mother tongue. Icelanders thought of our language as pure and we were proud of it, to speak the “original” Viking language was a totem the Icelandic nation carried together and could protect it at any cost.

There still are great traces of this pride today and Icelanders even celebrate “The Day of the Icelandic Language” on the 16th of November each year, a tradition that only started in the year 1996. Many believe that this is a factor in the fact that the Icelandic language had not changed that much over 1000 years.

In recent news, the Icelandic government is also setting aside 450m krónur (4,48m USD) a year over the next 5 years to raise funds for a specific language technology fund in hope that it will produce some open source materials developers could use. This is an effort to fight the good fight of making the Icelandic language visible and user-friendly on apps, voice-activated fridges or any other digital medium in Icelandic. Even with this effort, the challenge is immense and chances are that this will fail especially because the language is only spoken by a few hundred thousand people.

Is English widely spoken in Iceland?

As mentioned before Icelandic is still the prime language BUT the vast majority Icelanders speak at least one other language and for most of them that is English. The only confusion being that we learn UK English at school but most of our tv and digital entertainment is in American English. Icelanders are, though, throughout the world known for their excellent language skills and this makes traveling in Iceland SO much easier.

Is the Icelandic Language going extinct?

There is a real reason to be worried that it might. Icelandic is spoken today by barely 340,000 people and the helpful little voices on your mobile or digital servers are not amongst them. Unfortunately, at least now, there is no Icelandic speaking Siri or Alexa.

BUT then again the Icelandic language has survived major foreign influences before, don’t forget Iceland was once ruled by the Norwegian and even in the 19th century by the Danish and still managed to keep their language pure. However, with such a small nation and a small group of people speaking the language we can easily make changes, quickly. This can be both good and bad.
Good: If we need to make up a word for a new thing that has come along (this is done to strengthen the Icelandic language) we actually can and it will get widely spread in a short amount of time.

Bad: If a new foreign word gets into the language is quickly spreads and gets stuck in the language very easily.

Most say though that at this point Icelandic is most likely to survive but in order to do so they have to increase its presence in the digital world, but this has, like I mentioned before, already been addressed and measures are being taken to do so!

This topic has been addressed recently in an article published in the Guardian. Were they go further into the meaning of digital extinction.

Which language is closest to Icelandic?

That would be the Faroe language, spoken in the FaroIslands. I actually traveled there a few years back and when I spoke Icelandic most  people understood me. I just tried using the kind of language my grandmother uses and put in Danish words every now and then and there was (almost) a complete understanding.

Second to that would be Norwegian, but since Icelanders still learn Danish at school (traces from when they used to rule us) we find it a lot easier to understand the other Scandinavian languages than they actually do us. So as an Icelander you might think it’s close but other Nordic people might not agree.

Is Icelandic an easy language to learn?

The easy answer would be no, it is not. The Icelandic language is hard to learn, that is simply a fact.

The language has uncountable ways of altering each word and every time you think you have just mastered this grammar rule there will be an exception.

Each word is in a certain gender and each verb alters to the gender it’s being used in. There is no real rule to the gender, you just have to know.

The vocabulary is extremely rich and but like in most languages very dependent on the way of life in Iceland, we, for example, have an abnormal amount of words for both snow and wind.

Common Icelandic words and phrases – What you CAN actually learn!

Have a look at the list below and learn how to say thanks in Icelandic for instance.

Brand new Icelandic words that have caught on 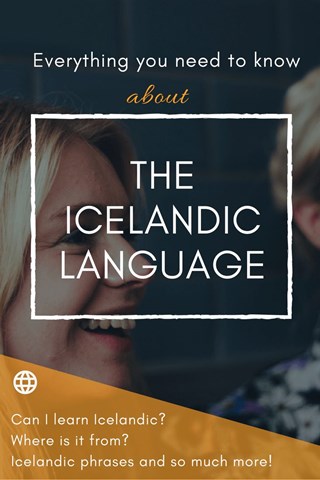