All about the Icelandic Flag | History and Fun Facts

All about the Icelandic Flag

The Icelandic flag is an important symbol for the Icelandic nation and played an even bigger part in the fight for independence. The flag is blue, red and white with a simple Scandinavian cross in the center and is therefore in accordance with the other Nordic Flags. The Icelandic flag we see today dates back to 1915 but that was the year the red cross was added on top of the white cross.

Icelanders see them nowadays. To them, the white stands for the glaciers and snow, the blue for the mountains and the red for the island’s volcanoes. Originally though, the red was added to symbolize Christianity. This has not stuck in the mind of Icelanders who are more likely to link it with volcanoes and magma. The flag became the National flag when Iceland gained its independence from Denmark in 1918.

The first Icelandic national flag ever to be introduced was presented by Jorgen Jorgensen often talked about as Jörundur “Hundadagakonungur”. At this time he ruled Iceland and put a great emphasis on Iceland having a national flag. Its background was blue but in the upper corner, you could see three cod (fish). Many thought this to be a rather strange flag but even so up it went on the 12th of July in 1809. The flag was, perhaps, fortunately, not long lived as Jorgen didn’t rule Iceland for more than a few weeks.

The next flag to be presented to the Icelandic nation was the flag of Sigurður Guðmundsson. It was introduced in 1870 but gained even more popularity in the rise of politically-active students who sought Iceland’s independence. This flag was also with a blue background, a brighter color though but had a white falcon at the center of it. The flying falcon was seen as a metaphor for the rising Icelandic nation and its flight to complete liberty. Oddly enough this design was accepted by the Danish state and accepted as Iceland’s national flag.

Urban legend states that the Icelandic design had originally had the falcon with big wings spread out but in the designing made by the Danes the falcon was re-drawn with its wings placed down in a much calmer and settled position.

Now Icelanders moved a bit closer to the flag we see today, this was done with the debut of the flag Hvítbláinn (the white-blue). It had a dark blue background with a white cross on top. Hvítbláinn’s first recorded sighting was in a parade in 1897. This flag can still be seen at the National Museum of Iceland.

Einar Benediktsson, it’s designer, was one of Iceland’s most renowned poets but for him, the blue and white stood for the mountains and the snow just as it does in the current flag.

The idea for the flag we see today first came up at a student council meeting in 1906. The design was presented by Matthías Þórðarson who later became the museum curator for the National Museum of Iceland. His reason for the choice of the colors was the same as we feel today, mountains, glaciers and volcanoes.

This flag quickly can into use and is said to have been the unofficial civil flag since 1913. The flag was officially adopted on the 19th of June, 1915. The flag as the Icelandic National Flag became even more apparent after the 1st of December 1918 as this was the day Iceland was made a sovereign state. Which furthered even greater its separation from the Danish crown.

In Matthias’ design, the flag’s blue was a bit lighter than what we see today but this alteration was made in 1944 when Iceland officially cut all ties with Denmark.

Fun Facts about the Icelandic Flag 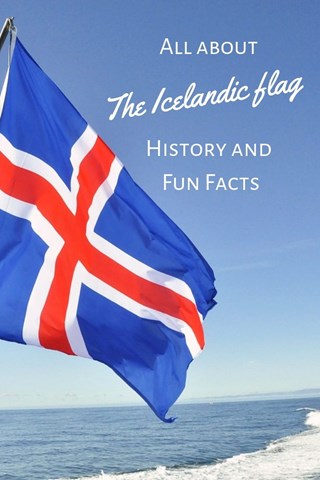 Wondering what to read before visiting Iceland? Why not dive headfirst into some Icelandic literature, where life in Iceland is covered from the Viking age to modern times. Some fiction, some crime, some true stories. Pick your poison(nove...

Iceland just became the smallest nation ever to qualify for the World Cup. Every year they seem to be breaking some kind of records. Here are some of the facts you need to know about the Icelandic national soccer team to understand them! Wh...

The National Day of Iceland - 17th of June

What is the story behind the people of Arctic Adventures?