Wondering what to read before visiting Iceland? Why not dive headfirst into some Icelandic literature, where life in Iceland is covered from the Viking age to modern times. Some fiction, some crime, some true stories. Pick your poison(novel)!

This is definitely a classic! The author, Halldór Laxness is the only Icelander ever to win a Nobel Prize and this book is said to have played a big part in the award being given. The book deals with the struggles poor Icelandic farmers endured in the early 20th century and their fight for a living. The farmers, who were the first generation since the debt bondage freedom lived in an almost impossible situation barely getting by with difficult land and isolated locations.

The novel is considered to be groundbreaking in the portraying of social realism in Icelandic literature from the 1930s. It is a touching book, not only in the way it takes on the living circumstances but also how it demonstrates the roots of capitalism on our society and the typical self-reliant spirit of Icelanders, hence the title.

2. The Draining Lake by Arnaldur Indriðason

A crime fiction novel from 2004 and the first book in what would later become a series of books about detective Erlendur. In Icelandic the book it called Kleifarvatn in Icelandic after a lake located close Hafnarfjörður on the Reykjanes peninsula. A body is found in the like which sets of unimaginable events and discoveries. This is the book that gets many hooked on Arnaldur’s writings but he usually published a book a year. Which are very much anticipated! Arnaldur is without a doubt one of the best known Icelandic authors.

Check out the movie Jar City which is made from another book about detective Erlendur.

3. I Remember You by Yrsa Sigurðardóttir

Some might have seen this seen the movie, but the Icelandic version of this novel was turned into a thriller in 2017 and can now be found on Amazon Prime and other large networks. The story is one that gives you chills to the bone. A young couple starts renovating a house at the remote Hesteyri in the Westfjords in the middle of winter when they start to get a suspicion of not being the only people there. A young doctor gets dragged into an investigation of a suicide of an old woman close by which seems to be obsessed with his son’s disappearance three years earlier. All of this somehow mixes together in an amazingly written spiral of events.

Get ready for twists and turns and maybe leave the light on when you go to sleep!

This one might seem like the odd one out as the author is not Icelandic but I am leaving it in as the topic, the story and the writing qualifies. Hannah took an old, well-known but a but dusted Icelandic true story and gave it a new life. This is the story of the last execution in Iceland and really, it has it all. This story has a villain, a victim, a horrible crime, a love story, human despair, and even a hero. Let Hannah take you back in time to when life in Iceland revolved around survival, not enjoyment and women weren’t given the opportunity to speak for themselves let alone explain.

Burial Rites by Hannah Kent is inspired by a true story and was shortlisted for The Baileys Women's Prize for Fiction, The Guardian First Book Award and The International IMPAC Dublin Literary Awards.

5. Njáls Saga by an unknown author

To many Icelanders, this is the essence of Icelandic literature! Njáls Saga or Brennu-Njáls Saga is a story published in the 13th century that describes events which are believed to have taken place in South Iceland between the years 960 and 1020. The main characters are Njáll, hence Njáls Saga, his best friend Gunnar and their wives Bergþóra and Hallgerður. Even though they are best friends, the women are anything but which eventually leads to fatal feuds between them. The saga deals with honor, love, revenge, hardship, battles, family and class distinctions in the Icelandic Commonwealth.

The work is still to this day listed as anonymous although there have been great speculations of the author’s identity. The way the story is told and the material it provides tells a great deal. Njáls saga is the longest and most developed of the Icelandic Sagas. To have descriptions of this era in such detail and length are unique even at a global scale.

First Published in the 13th century.

Angels of the Universe is a book every high schooler in Iceland is made to read and for a good reason. It is a story of a man’s descent into madness and the emotions and conflicts that it brings. This story will take you on an emotional rollercoaster, with a lot of darkness but not without humor or wit. The main character is extremely intelligent and often light in mood but has experiences with paranoia, depression and hallucinations and experiments with drugs which does not help. He is placed in the mental hospital, Kleppur, where he meets the most colorful of persons who bring a lot of the humor found in the book. It is a compelling novel, especially as the main character is built from Einar’s own brother. It has sometimes been described as the Icelandic version of “One Flew Over the Cuckoo’s Nest”.

The story has been made into a movie which received many awards and many of the sentences in the book live with Icelanders in everyday life.

“But just bear in mind that the madhouse is in a lot of places.”

7. The Woman at 1000 Degrees by Hallgrímur Helgason

Herra Björnsson is an eighty-year-old woman living alone in a garage in rural Reykjavík. Her only company is her computer and an old grenade that has followed her since World War II. As she waits for her death she contemplates her life, the people she met along her way and the courses that life threw at her. As she books her own cremation we come to learn the true person she is and quite frankly the bad-ass that once was.

Hallgrímur Helgason once again displays his talent through an ironic, humorous, realistic and raw telling of a person’s life. We follow Herra through World War II, where we are introduced to the greatest of parties to the lowest of miseries and everything in between. Herra is one of the most refreshingly irreverent heroines you will have met!

Fun Fact: In the Icelandic version her name is Herbjörg. The name is put together from two names Her- and -björg. Her- means an army and furthermore -björg means protection or saving. For a story about World War II the name is an obvious choice.

Heaven and Hell is a part of a novel trilogy by Jón Kalman and once you have finished this one you will find yourself looking up the next two. The story is of young boys in a remote fishing village in Iceland. One day they do as the costume is in Iceland at this time and go out on a fishing boat alone.  Due to unforeseen events, one passes. This leads the other boy on a journey which we follow through the books. The story is a lucid and gritty account of life and death in the fishing communities of Iceland. Jón Kalman is renowned for its poetry and philosophy and this book is a great symbol if his brilliance.

What starts off as a bit of a peculiar tale of a man chasing a blue fox is then turned into a fascinating saga of human actions and relationships. The story expands in the most brutal yet beautiful way and all of a sudden we are following the story of herbalist and a girl he adopts with Down Syndrome.

The book’s descriptions of the cold northern winters and the landscapes are spellbinding and spot on. Eventually, all of the characters are tied together in the most natural yet surprising way and for many, that is what makes the book. Sjón’s poetic writing and a great way with words are difficult to describe, one must simply read his work.

10. The Greenhouse by Auður Ava Ólafsdóttir

This book is a touching reminder of our ability to turn the small everyday things in life into something extraordinary. The Greenhouse is a heartwarming tale of recovery, growing up and new beginnings. It is a story of a young Icelandic man, Lobbi, who at the beginning of the story, goes through the loss of his mother. He has a one night stand with a stranger which leads to the birth of a daughter. To honor his and his mother’s bond through gardening he travels to Europe to tend to a garden in a monastery. Surprisingly, his daughter and baby-mother, which he barely knows, follow him and stay for a month. The rest you will have to read in the book which is a lovely endearing story with many layers and wisdom linked with fatherhood and the importance of family. It is written in a crisp and direct style and the way Auður Ava channels the emotional landscape of a young man coming to terms with growing up and life, in general, is outstanding. 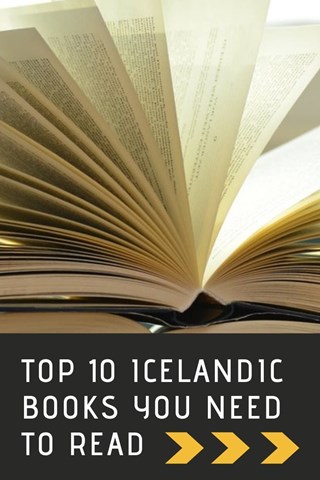