The 10 Most Remote Places to Travel in the World

Where to Find the Most Isolated Spots on Earth

The 10 Most Remote Places to Travel in the World

Menu
More
Jessie Smith
|June 5, 2020
Jessie is a writer from Atlantic Canada. Aside from traveling, she enjoys sports, cooking, and music.

Want to get away from the crowds? The world is filled with beautifully quiet, isolated, and pristine spots – the trick is to know where to find them. To help you plan the ultimate holiday getaway, we’ve drummed up a list of the most isolated places on Earth and how to get there.

Here are the 10 most remote places to travel in the world:

Discover the most remote place to visit in the world with over 580 square kilometers (220 square miles) of incredible nature to explore. One of Iceland’s many hidden gems, Hornstrandir is located at the northernmost point of the remote Icelandic Westfjords. Only accessible via boat, this is the top spot to get away from the crowds, see wildlife in its natural habitat, and surround yourself with the most unspoiled nature on Earth.

Tristan da Cunha are the most remote islands of the British Overseas Territories. Nestled in the South Atlantic, the volcanic lands are home to fewer than 300 people. Considered the most remote populated island group on Earth, Tristan da Cunha is only reachable by water from Cape Town at a distance of 2787 kilometers (1732 miles). The island is so remote that only three ships travel there nine times a year.

Easter Island, also known as Rapa Nui, is one of the most secluded places to visit in the South Pacific Ocean. A Chilean territory, the island is famed for its mysterious moai head stones carved many centuries ago. Travel to this isolated land by plane from Santiago, Chile to enjoy the rich history and nature of the UNESCO World Heritage Site.

One of the best remote places to travel is the isolated region of Ittoqqortoormiit, Greenland. Situated along Greenland’s eastern shore, this area boasts incredible wildlife such as polar bears, walruses, arctic foxes, and seals. You can only get to Ittoqqortoormiit by helicopter, but once there you’ll have the opportunity to kayak and dog-sled in a natural paradise.

The last region to get road transport access in Tibet, Motuo County is a remote stretch of land with a population of around 12,000. The local communities of Motuo live among the area’s vast number of plant and animal species and rely on cotton, soybean, paddy, and gingeli farming. You can only reach the lush and mountainous region by traveling through mountain terrain for four days by foot.

Often overlooked by travelers in Egypt, Siwa Oasis is a remote urban oasis situated in the middle of Egypt’s Western Desert and the Qattara Depression. Siwa Oasis is so isolated that its roughly 33,000 inhabitants have been able to preserve their unique desert culture and languages. If you’re visiting Egypt, you can reach the oasis on a five-hour bus ride from Egypt’s capital of Cairo.

Spanish for “Star Town,” Villa Las Estrellas is one of two residential towns on the entire continent of Antarctica. The remote Chilean community has roughly 80 people who live in 14,90 m² (970 sq. ft.) houses. The remote area also acts as a research station and air force base, and features a gym, public school, church, and post office. It takes a two-day boat ride from Ushuaia, Argentina to get to Villa Las Estrellas.

Iqaluit is the capital city of Canada’s northern territory of Nunavut and one of the most remote places on Earth. Tucked away inside Frobisher Bay on Baffin Island, Iqaluit is a sparsely populated arctic region with an estimated population of under 10,000. This stunning winter wonderland is only possible to reach by air or water, but you easily take a flight departing daily from Ottawa.

Apolima is the smallest of the four Samoan Islands in the Pacific. Few people will ever travel to this remote tourist destination as visitors must arrange to stay overnight with local communities. If you do get the opportunity to explore Apolima, its lush jungle terrain and warm turquoise waters are out of this world. Travelers must take a 35-minute boat ride from Upolu Island to reach Apolima.

Want to discover the most remote locations in Iceland? Avoid the busy crowds and visit Iceland’s most secluded places. 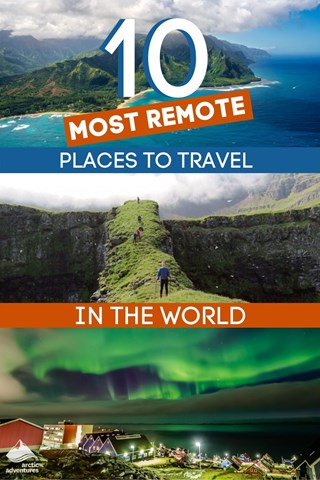 The 5 Top Hidden Gems in Iceland

Iceland is one of the most isolated places to travel on Earth, but where can you go off the beaten path in Iceland? With everything from vast glacier landscapes to untouched stretches of rugged coastline, there are many remote places you ca...

If you’re traveling to Iceland, our up-to-date travel guide covers everything you need to know, including how to stay safe during the COVID-19 pandemic. Iceland's bars are lively and natural attractions are wide open to tourists. Get inspir...

15 Best Things to Do in Iceland

Iceland is a small country that packs a big punch. On just one trip, you can walk on sparkling beaches, hike enormous glaciers, climb through lava caves, watch geysers erupt, explore primeval forests, and much more.