Hot springs, volcanoes and glaciers, explored from the sky!

Explore Iceland on an epic Helicopter adventure. Right from Reykjavík you can join multiple options for Helicopter Tours that to take you to amazing locations and show you the best views Iceland has to offer. Hot springs, volcanoes and glaciers, the world is your oyster!

Try the most epic Happy Hour Reykjavík has to offer. Iceland's capital has never been so pretty. We'll sure toast to that!

See Reykjavík Iceland's capital in a whole new light, through the eyes of the birds. A helicopter ride over the stunning Reykjavík will stay in your memory forever.

Explore the ice and fire of Iceland! From the icy highlands of Thorisjokull glacier to the fiery volcano of Hengill Geothermal Area.

Enjoy the magnificence of nature and capture the serenity of Iceland's magical beauty, from the comfortable seat of a helicopter.

Explore moss-covered lava fields, colorful mountains, steaming hot spring from an above with a landing off the beaten track of Hengill geothermal area.

Climb aboard one of our helicopters and enjoy Iceland’s glacier lagoons from the air on this breathtaking day tour.

Enjoy a scenic helicopter tour where the impressive Skaftafell area will be explored. Ideal for those that are travelling through the South Coast and would like to explore the natural gem from above.

A Guide to Helicopter Tours in Iceland

“Once you have tasted flight, you will forever walk the earth with your eyes turned skywards, for there you have been, and there you will always long to return.” – Leonardo da Vinci

If you get goosebumps every time you see the mind-blowing aerial footage from Iceland, you may suffer from a rare disease that we call ‘helicopter-wanderlust.’ This unique condition involves an irresistible urge to experience flying over steaming volcanoes and staring deep down into the Earth’s throat.

You probably feel an overwhelming curiosity about what it is like to land on top of a glacier in the middle of nowhere or what a hundred-meter tall waterfall looks like from above. Perhaps you have even caught yourself wondering how long would it take to fly over the largest lava field on the planet.

If you have come down with a case of helicopter-wanderlust, you probably spend a lot of time imagining what the rifts between the continents and freshly formed steaming lava fields look like from a bird’s eye view.

If these symptoms sound familiar, it is time to go after your dream and make it come true. There is no better place to go on a helicopter tour than Iceland! Read our tour guide to find out what option suits you the best!

Why Is Iceland the Best Place on Earth to Go on a Helicopter Tour?

There are plenty of amazing things to see and do on our planet, but Iceland is a compact wonderland. In just one short tour, you will be able to see natural wonders that rarely occur in one single area anywhere else in the world. What Are the Best Helicopter Tour Options in Iceland?

There are plenty of options available for those who wish to explore Iceland from above. The length of the tours ranges between 20 minutes and 7 hours. Choices include the shorter and cheaper Reykjavík helicopter sightseeing tours, the somewhat longer geothermal and glacier landing tours, as well as the half-day and day-long extended superior tours and expeditions that take you to Iceland’s most thrilling natural attractions with several landings.

You can explore the vibrantly colorful cityscape of Reykjavík, the world’s northernmost capital, from the air with just a short tour. Reykjavík sits on a small peninsula and is surrounded by wondrous scenery that provides an idyllic backdrop to this peaceful little town. A stunning bay with countless tiny islands hugs Reykjavík from one direction while gorgeous hills, scenic mountains, and ages-old volcanoes decorate the background.

Within just a few minutes of flight, you leave the city behind and find yourself in the middle of the totally unique Icelandic landscape. A mountaintop landing is included in most Reykjavík summit helicopter tours. From the top, you will have a spectacular view of the bay and the shockingly small capital city.

The land of fire and ice is full of contrasts. From above you will have the best perspective from which to admire the extremities as they coexist. 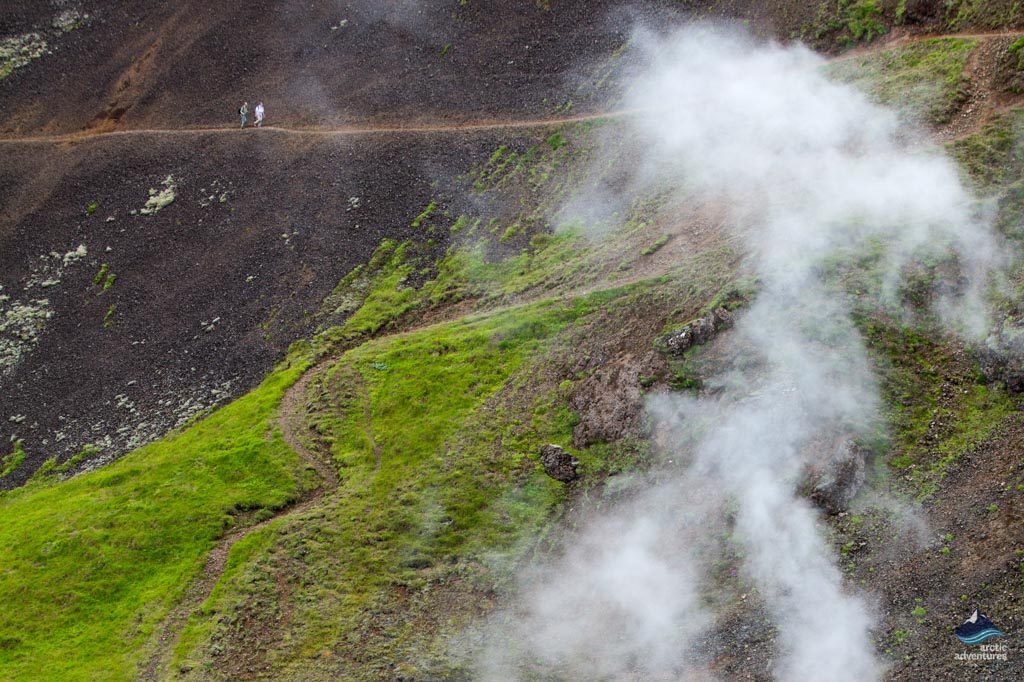 Steam rising up from a geothermal site in the middle of a glacier. Black lava flows stretching over the colorful landscape. A vibrantly green mountain towering in the middle of the black desert. Hot springs bubbling in a snowfield.

Seeing all of these extraordinary natural phenomena from a helicopter is something that everybody dreams of!

Iceland may be a small country, but there is so much to see in it! If traveling by car, visiting the most beautiful highlights could easily take many days. Meanwhile, in a helicopter, you can travel over a broad area in a short amount of time, allowing all of the most attractive sights to fit in just one exhilarating tour. 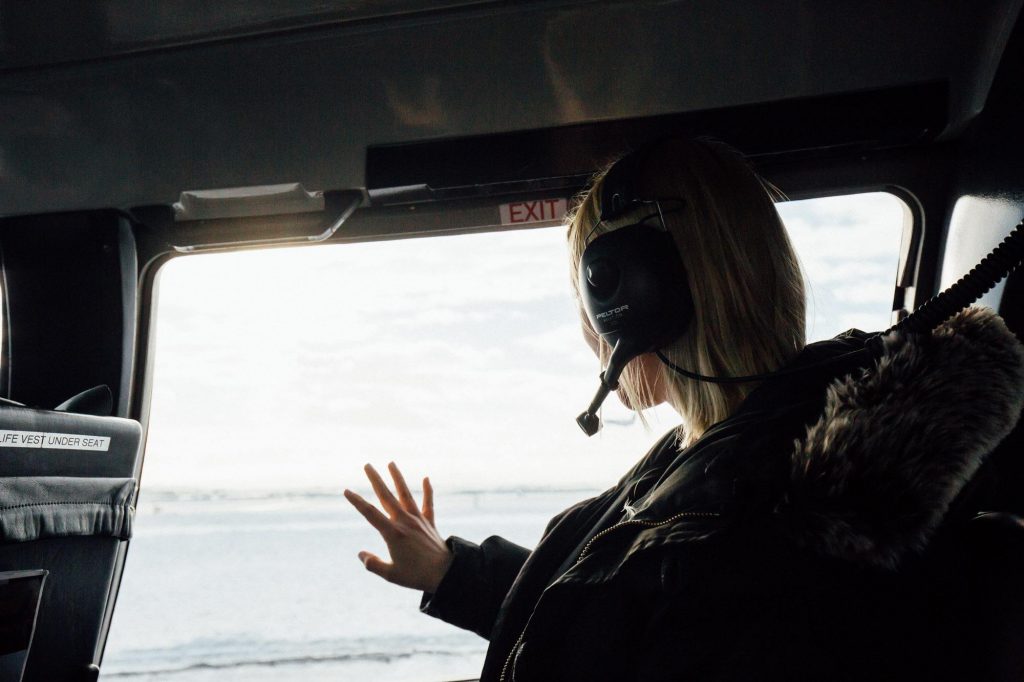 This is not only the most time effective way of exploring Iceland but also ensures the most mind-blowing views and the greatest adrenaline boost whilst you sit comfortably and glide through the air.

You can also have access areas that are unreachable from the ground, such as over volcanoes or the most deserted parts of the Highlands. The absolute superior experience of leaving the crowds and the beaten roads behind will definitely leave you speechless!

What to Know Before Booking a Helicopter Tour in Iceland

You may be wondering if there is a chance to see a volcanic eruption in Iceland. At the moment of writing (September, 2019), there are no erupting volcanoes in Iceland. We do, however, have eruptions every 4-5 years on average with several volcanoes due to erupt at any time.

The most recent volcanic eruptions occurred at Bárðarbunga in 2015 and at Eyjafjallajökull in 2010. There are helicopter tours that take you to these freshly formed, still steaming, hot lava fields.

So, the next eruption is already due! When it happens, we will keep you updated on our blog and social media pages (Facebook, Instagram, Twitter). So stay tuned!

The weather in Iceland is notoriously unstable. Helicopter tours may get canceled for poor visibility due to dense fog or low clouds. Extremely gusty winds, heavy rain, or snow can disrupt our plans as well. However, the temperature has no effect on flight conditions as helicopters are equipped with both heating and air conditioning. Light rain that does not affect visibility is not a problem either.

As weather conditions are beyond our control, some flexibility is required when booking a helicopter tour. If the conditions are poor and your flight is canceled, you can either request a full refund or reschedule your flight for another day at no additional cost.

There are no scheduled departure times in general. To find a suitable departure time for the day you booked the tour, we will contact you shortly after you book. The helicopter tours depart from the domestic airport in Reykjavík. The airport is located a few minutes driving distances from the downtown area.

What to Wear on a Helicopter Tour in Iceland Dressing warmly is quite important when joining a Helicopter Tour. It isn’t just because you might get cold during the stops but also because you might get cold during the ride. Majority of the helicopter’s space where you are sitting is made from glass, this is done to increase the experience and to make the views amazing. But the downside to it is that the heating isn’t as central in those areas. The fix is to dress warm!. When dressing keep in mind: layers, layers, layers and then just enjoy the vista!