Best Wildlife Watching Tours in the Land of Fire and Ice

Read about the country’s wild animals and embark on wildlife watching tours in Iceland. Seek the arctic fox in Hornstrandir Nature Reserve, go whale watching in the North, and see puffins above the Arctic Circle, and more. Some tours combine wildlife watching with hiking, sea angling, hot spring hunting, and other activities.

Wildlife watching tours are a great way to get to know Icelandic nature and spend time with family and friends. All tours are child-friendly and can be done in summer and winter.

Join us on this Rib whale watching safari & puffin day tour. This is your opportunity to get a lot closer to the whales in a rib boat with suspension seats for increased comfort!

Join us on a fun whale-watching tour from Reykjavik. Then hit the road and swim the turquoise waters of the Silfra Fissure in the clearest water on earth!

An exciting whale watching boat tour and the attractions of the Golden Circle. See Geysir, Þingvellir National Park and Gullfoss waterfall - for a truly magical day trip from Reykjavík.

A morning of whale watching in the seas around Reykjavik and an afternoon of paddling rapids on the Hvítá river!

Embark on a thrilling full day of whale watching and Northern Lights from Reykjavik!

An incredible sightseeing experience to meet Puffins, the bird totem of Iceland in their natural habitat!

A wildlife and nature lover’s dream – the perfect way to make the most out of your time in Iceland!

The waters and islands close to Reykjavik are full of amazing wildlife with the opportunity to see some of the most impressive and fascinating animals in the world!

Join us on this fantastic two-day tour that is the absolute best way to explore two jewels of Iceland’s remote Highlands: Landmannalaugar and Thorsmork.

Hike from Hornvik to Veidileysufjordur in Hornstrandir Nature Reserve, a place where no humans have lived since the 1950s and where Arctic foxes roam free.

Meet Arctic Foxes and enjoy the Midnight Sun while staying in a remote farmhouse on the edge of a peninsula!

Join an adventure that begins with a glacier walk on the icy slopes of Solheimajokull Glacier, followed by horseback riding across a black sand beach.

What better way to explore Iceland’s South Coast than from the back of a traditional Icelandic horse?

This combination day tour will take you on a scenic ride in the Reykjavik countryside and then allow you to see the wonders of the Golden Circle.

Explore the beautiful scenery that Vik has to offer, in the company of the friendly Icelandic horse. 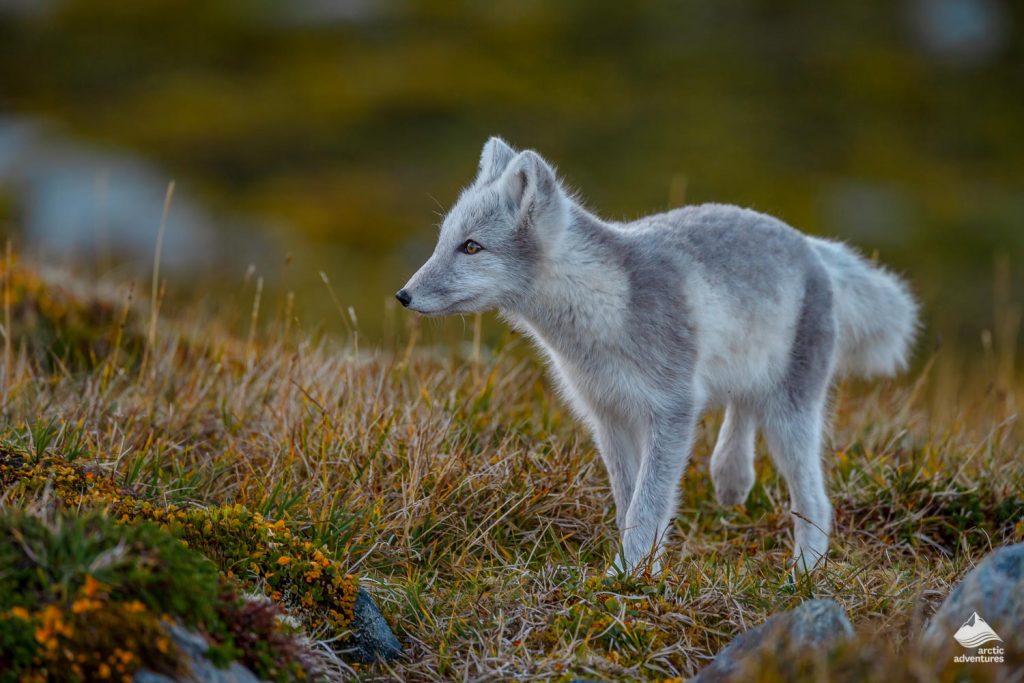 Before humans ever stepped on Iceland’s soil, the arctic fox was the only native land resident. Humans then brought with them domesticated mammals including sheep, Icelandic horse, cattle, and goats. Meanwhile, birds and sea animals were roaming the shores of the country in search of nesting sites and food. For such a tiny island in the north of the Atlantic Ocean, Iceland cradles hundreds of different species of wildlife.

Besides the most popular animals such as whales, Arctic foxes, and puffins, Iceland has an abundance of field mice, mink, rabbits, and reindeer. Polar bears occasionally turn up on the northern shores when traveling from Greenland. Random seal colonies dot the Vatnsnes and Snaefellsnes Peninsulas. The best way to spot wildlife is on a guided tour. Expert guides know where to look and how to behave around wildlife. 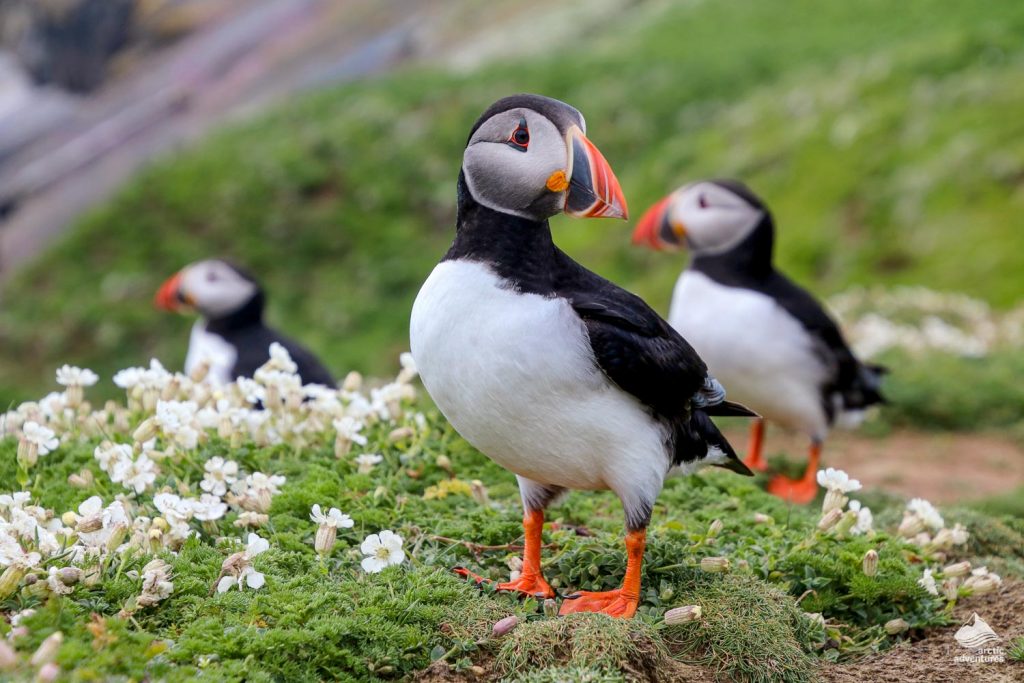 Iceland is home to 60% of the world’s total puffin population. It is without a doubt the puffing watching capital of the world.

From late April to mid-September. During the warmer seasons, puffins come to land to nest.

Puffins roam all over Iceland and can be spotted even in Reykjavik. There are a few places where huge colonies of puffins can be seen and approached up close. One such location is Vestmannaeyjar, or the Westmann Islands. Located just off the southern shore of Iceland, the island is home to one-fifth of the nesting puffin population. And if that’s not enough, over 30 other bird species nest there too. Vestmannaeyjar is truly a bird watching paradise. 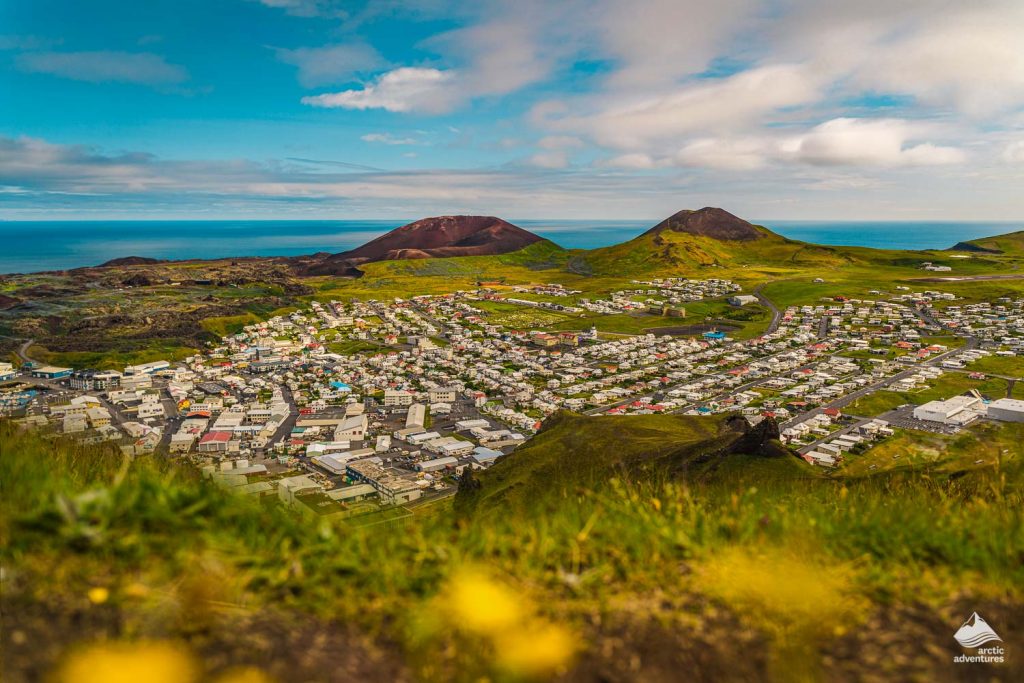 Another great location for puffin watching is Grimsey Island. The island is located around 24 mi (40 km) off Iceland’s northern shore and the Arctic Circle pierces right through the middle of it. Grimsey Island is home to around a hundred people and over a million birds every summer. This is one of the only part of the Arctic Circle in the world that travelers can explore.

As fascinating as Grimsey Island is, it is also very remote. To avoid the hassle of getting there, book our Arctic Circle boat tour to the island. 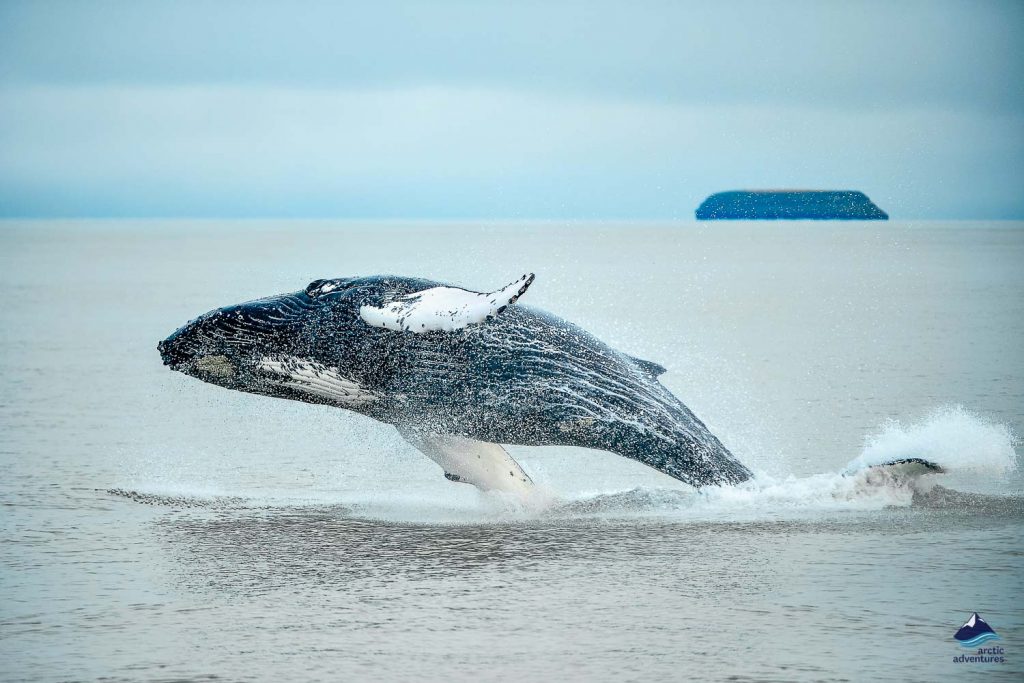 Just like many other polar regions, Iceland attracts all kinds of whales. Never-ending summer daylight and the warm and cold currents coming from Silfra Fissure bring an abundance of zooplankton, krill, and small fish — all whale food.

Here are a few of the most common species of whales found around Iceland:

Summer months are perfect for whale watching in Iceland. June, July, and August have a 98% success rate! Winter months also have a pretty high chance of seeing whales, around 90%.

The two best spots for whale watching in Iceland Reykjavik and Dalvik. Whale watching from Reykjavik takes place just off the shores of the Old Harbor in Faxaflói Bay. Minke whales, white-beaked dolphins, and porpoises frequent the bay during the winter and humpbacks roam around during the summer. 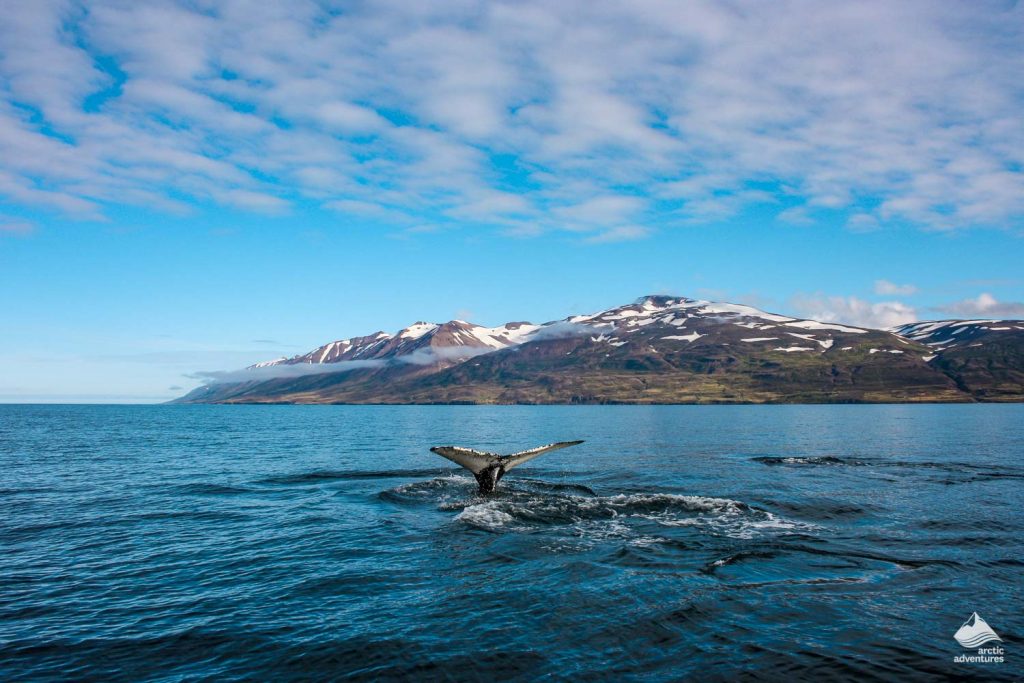 Another great location for whale watching all year round is Dalvik. Dalvik is a small fishing village with 1400 inhabitants. Nestled in the cradle of Eyjafjörður Fjord and surrounded by breathtaking views, the town is a perfect location to meet humpbacks, minke whales, white-beaked dolphins, and porpoises. Even the magnificent blue whale sometimes visits the bay.

Whale watching is only available on a guided tour. Join our whale watching tour from Dalvik and scout the northern shores of Iceland for these gentle giants. The tour also takes you sea angling.

If you think that whales are not enough, join our whale watching and puffin tour on a rib boat. 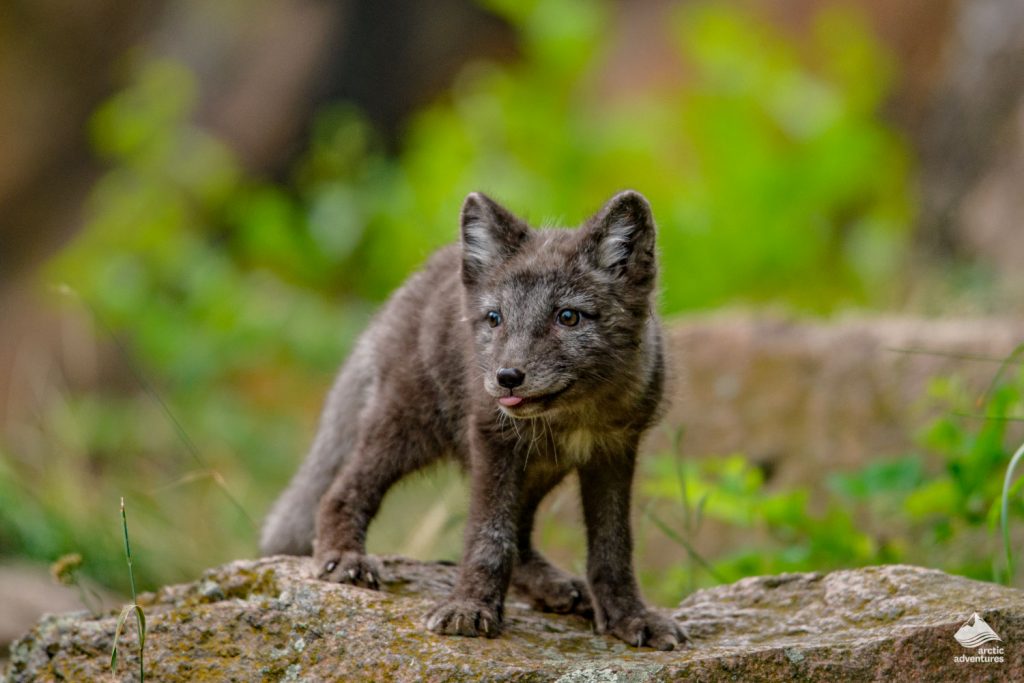 Before Vikings settled in Iceland, the arctic fox was the only native resident. The animal, slightly bigger than a large cat, is famous for being very adaptive and friendly.

Best time to see the arctic fox in Iceland:

Year-round. Unlike puffins, arctic foxes are not seasonal animals and live on the island throughout the year.

Arctic foxes can be found all over Iceland but most of them live in the Westfjords, particularly Hornstrandir Nature Reserve. They feed mostly on birds, bird eggs, sea animals resting ashore, and field mice, which are in abundance in the Westfjords.

Always dreamed of spotting one of these creatures? Join our fox watching tour in Hornstrandir Nature Reserve and observe arctic foxes in their natural habitat. 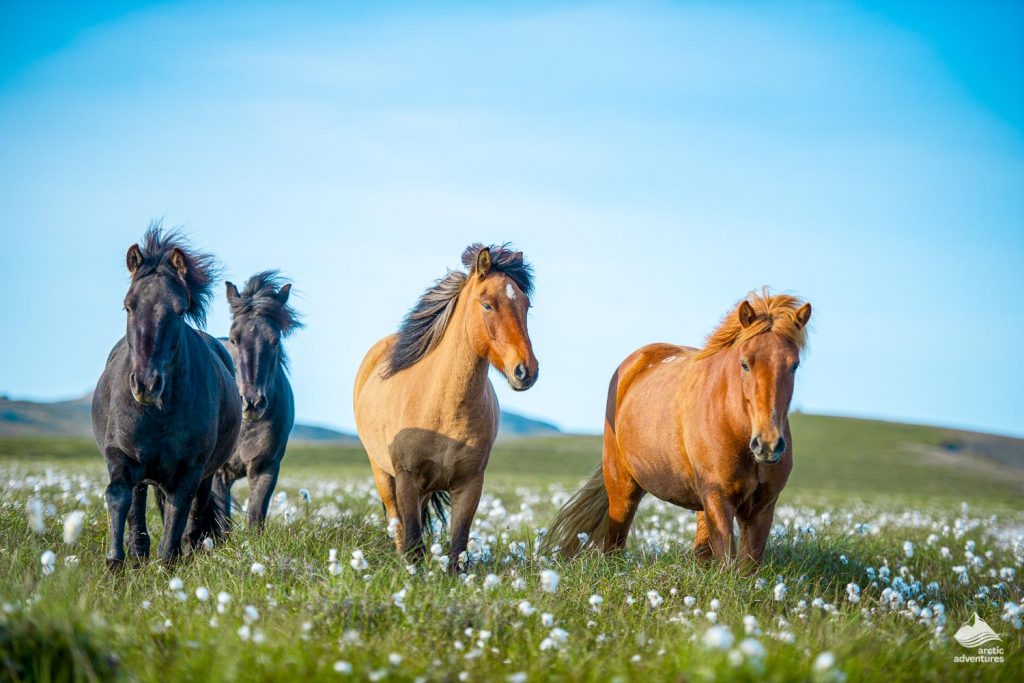 Even though it’s not wild, the Icelandic horse is worth mentioning. Shipped in by the first settlers, the horse has since adapted to the harsh Icelandic weather and become one of the most persistent animal friends of the farm. It is iconic to Iceland and no visit to the country is complete without meeting one of these beauties.

Things NOT to do next o Icelandic horse:

All year round. The Icelandic horse is out and about throughout the year, helping its owners preserve and maintain the land. 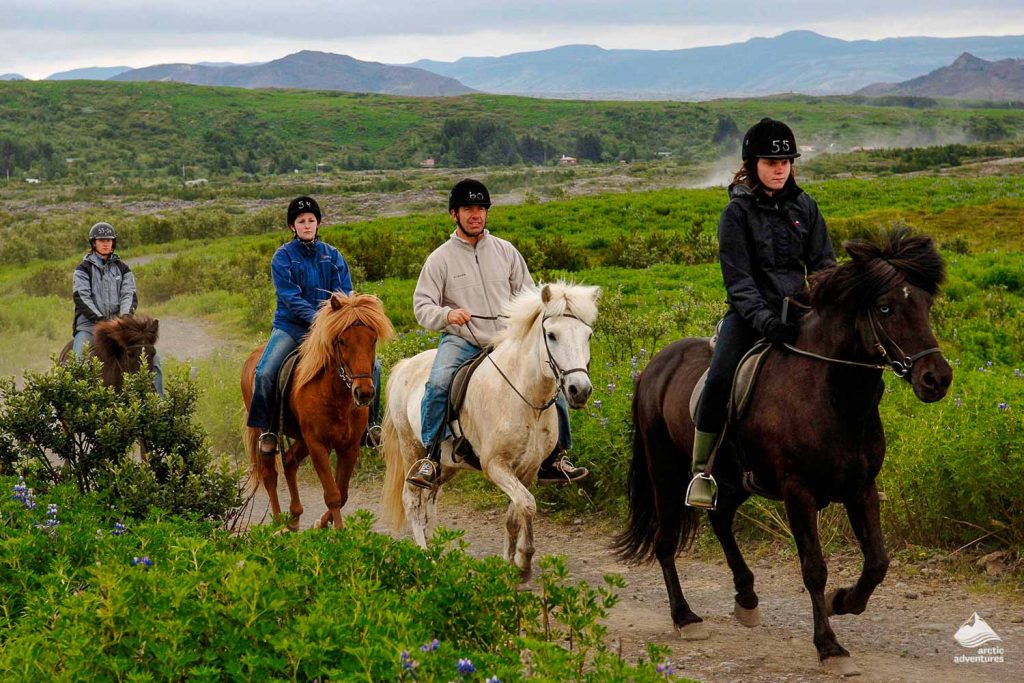 If you want to see or even ride the horse, you should visit one of many private farms that offer horseback riding, petting, or feeding services. Instead of searching for such farms yourself, join one of our horseback riding tours.

What wildlife can I see in Iceland?

For such a tiny island in the north of the Atlantic Ocean, Iceland has an abundance of wildlife roaming its shores. Besides different kinds of whales, arctic foxes, puffins, and Icelandic horses, you can also see field mice, mink, rabbit, and reindeer. Iceland’s more popular domesticated animals include sheep, dogs, and cattle.

Where to see puffins in Iceland?

Iceland hosts around 60% of the world’s total puffin population, so you might be lucky and spot them almost anywhere. But there are two islands in particular filled with Puffins: Vestmannaeyjar and Grimsey Island.

Where to see whales in Iceland?

The most popular whale watching locations in Iceland are the shores of Reykjavik and northern Dalvik.

What do I need to have for a horseback riding tour?