Menu
More
Kay
|July 31, 2017
Loves writing, food, runes, Reykjavík life, traveling in Iceland and being out in nature. Born in England but fell in love with Iceland in 2010 and moved here, been here since.

The eruption cycles of Katla volcano have always commanded great attention and respect from the Icelandic people. Nowadays, Icelandic and overseas volcanologists and earth scientists are monitoring Katla like never before.

When will Katla erupt next? Updates for 2019

This burning question is uttered with increasing frequency. Katla has a close relationship to the word kettle, and all the signs indicate ’the kettle’ is surging towards boiling-point! An eruption is likely to happen in the near future.

So, will there be a Katla Volcano eruption in 2019? While Katla has exhibited increased activity in 2019, the next eruption could happen any time in the next 1 to 50 years. Increased seismic activity around Katla was documented in August and September 2019. According to geophysicists, recent earthquakes and overheating might lead to an eruption in the near future ⁠— or not for several decades.

In September 2019, three earthquakes under a magnitude of 1.0 occurred near Katla. This geothermal activity might be the lead up to a volcanic event. Still, there’s no need to prepare for the apocalypse just yet. Recent activity is too minor to warrant immediate alarm.

While it’s quite usual to have a few tremors when the ice caps melt in summer, the Icelandic Meteorological Office saw reason to upgrade Katla to yellow alert on their aviation scale color code map on July 29, 2017. This upgrade was mainly due to a glacial outburst flood at Múlakvísl, where electrical conductivity was measured at 580 µS/cm and increasing by the hour.

In 2018, an article was published by Cambridge-educated Icelandic volcanist, Evgenia Ilyinskay, stating that Katla is, “a globally important source of atmospheric carbon dioxide (CO2)." Many reporters interpreted the article to mean that Katla was gearing up for an imminent eruption. However, according to Iceland's leading geophysicist, Magnús Tumi Guðmundsson, these claims were premature. Guðmundsson said that the only conclusion that can be drawn is that further research is required to understand what the carbon emissions mean.

What time of the year will Katla erupt?

From around the year 1500, all of the eruptions have happened in between the months of May to November. There is no clear reason for this but it might be caused by added pressure under the glacier which happens in spring, summer, and fall.

How long will Katla’s eruption last?

Let us start by saying that this is a natural volcano so there is no set time frame but the eruptions have been anything from two weeks up to five months or longer.

In 1823 Katla erupted for 28 days which is considered a short Katla eruption.

In 1755 Katla erupted for 120 days which is still today the longest one on record.

When did Katla last erupt?

A drawn photo of activity around 1300

Katla Volcano has over more than 11 centuries until recently, erupted at least once every 95 years, usually more often. Possibly there were insignificant subglacial eruptions in 1955, 1999 and 2011. However, Katla eruption 1918 is the one we are counting from – so the time is ripe!

What will happen when Katla erupts?

The glacier runoffs in 1918

Katla has sometimes ruined the land for farmers and some farms were even deserted. Animals have had to seek grass in new places and/or be taken inside.

The record for the most damage still stems from the year 934 and the Eldgjáar eruption, lava flowed down into Álftaver, Meðalland, and Landbrot. Today, an eruption could affect transportation via airlines and roads might be closed.

Generations of Icelanders have survived living close to the active volcanoes which pepper this land. With good reason, Iceland is said to be the ‘Land of Fire and Ice’. There is an eruption from one or other of these ´fire giants´ every couple or at least every few years, sometimes more often. This is just a normal part of life in Iceland. When the Bárðarbungu eruption was on its way I heard Icelanders say they felt excited but irresponsible for feeling that way! Fortunately, Bárðarbungu was well away from any communities so no one was evacuated from the place where they lived and worked. So, yes, there is excitement whenever Katla begins to boil! Is Iceland safe?

Yes, there is a formal evacuation plan in place and state of the art scientific monitoring is utilized to assess any risk. Tour operators will immediately take the advised actions/precautions in the event of an increased risk or eruption warning.

When Eyjafjallajökull went off in 2010 the system worked perfectly. No humans were hurt and in a matter of hours, everyone had been accounted for.

The news kept everyone constantly updated and alerts were spread well. Even if Katla erupts, this is not our first rodeo!

For further info on Katla visit Volcanoes in Iceland. 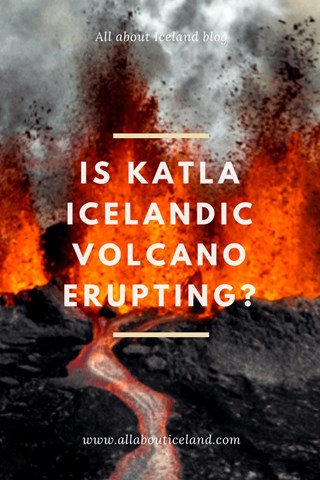 Bardabunga Icelandic Volcano is always showing some activity. Last erupted in 2014 but where does the volcano stand today? Here you will get a chance to learn all about this beautiful Volcano and where it stands today. Will it be the next I...