Icelandic Hostels vs Hotels | Which Is Better?

Menu
More
Kathryn
|May 15, 2019
As part of my Event and Business Management degree, I decided to move to Iceland to join the marketing department at Arctic Adventures. I love exploring, photography and going on new adventures.

Iceland has a range of hostels and hotels – but which type of accommodation is right for you? Here’s a quick guide to help you choose.

Yes, there are dorm rooms and shared bathrooms in hostels, just like anywhere else in the world. But some are higher end too, offering chic décor and some extra attractions (like their own bar and restaurant).

And the hotels vary too. While some are also what you’d expect (especially if they’re part of an international chain), there are also hotels with their own unique sense of quirkiness and selection of exciting social events.

We’ve decided to address the question in the headline directly; looking at what distinguishes them as well as what they have in common. These are not inherent advantages or disadvantages. It’s probably more helpful to think of them as quirks or qualities. One person’s rowdy dorm is another person’s perfect party venue!

Every traveller is different, of course, so we hope this guide will nudge you towards the accommodation that’s right for you.

What do Hotels & Hostels Have in Common?

Many consider hostels to be a cheap and communal experience, while hotels are often considered expensive, luxurious and isolated.

In Iceland, however, the line is a little bit blurrier.

There is a cost scale in hostels, ranging from the relatively affordable (in which case you’ll likely be sharing a dorm) to the higher-end (which will give you your own private room or family room). This range goes from as little as €12 (US$13.55) per night to €100 (US$113) per night.

In both cases (just like in any country) size of the room, seasonality and location play a big part in how much you’ll pay for your bed. But it’s worth noting that there is a crossover area, where low-cost hotels and high-end hostels cost roughly the same amount.

One reason for hostels’ continued popularity is their friendliness. For travellers exploring Iceland on their own, a shared dorm, kitchen or TV room is a godsend; a place to meet likeminded people from around the world and make new (maybe lifelong) friends.

If the hostel has its own bar or restaurant, that’s even better, especially if they offer social and cultural events, like live music and movie nights.

If you’re travelling with friends or family, this kind of thing might not be a priority, but a built-in social ecosystem is a great gift for the lone traveller.

Don’t get us wrong – the standard of comfort in Icelandic hostels is pretty high. You can get a very comfortable bed in many affordable places.

But if your budget allows it, you can really see the benefits in high-end Icelandic hotels. Some are part of elaborate and gorgeous spas, taking advantage of the natural, rejuvenating springs and baths that can be found throughout the country (don’t forget your pool etiquette in such places!).

A 4 or 5-star resort might offer stunning views, hot tubs, penthouses, mountain or lake views, high-end food, comfort, space and impeccable service. And the 4-star prices can be as low as €145 (US$163) per night.

As the tourism boom in Iceland continues, more and more high-end hotels are becoming available. Many of these hotels – and especially their spas – are world class.

Hostels – have both private rooms and shared dorms

While the stereotype of hostels states that they are made up entirely of dormitories, they also offer private rooms for couples or families. In fact, some provide sleeping pods, which is like a compromise of both – rows of self-contained booths within a bigger room.

Hotels – more varied than you expect

One perceived downside of staying in a hotel is that they’re seen to be generic or sterile. However, there are many places throughout Iceland that offer both luxury and personality.

So, some of the higher-end choices include a Viking-themed hotel, accommodations with views of the Northern Lights and a (fairly expensive) hotel on the Blue Lagoon. And some hotels in Reykjavik have quirky decorative flourishes in their dining areas and rooms.

While hotels can usually offer more luxury and privacy, they are sometimes limited by logistics and location. Thus, some of the further reaches of Iceland are more limited in their accommodation. For those who wish to spend the night in some of the more remote, unusual parts of Iceland, hostels and guesthouses are the best options.

Iceland, as you can see, is a welcoming place. We’re used to curious visitors and we can accommodate any kind of traveller.

Whether you want to lie on luxury sheets, or you’ve brought your own sleeping bag, there’s a bed waiting for you in Iceland.

Now that you’ve had some time to consider your accommodation, why not decide which adventure tours you’d like to take? 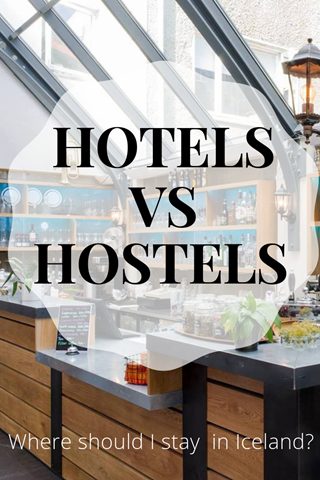 Horseback Riding in the Icelandic nature & Snorkeling in Silfra fissure

A Complete Guide to Camping in Iceland

Everyone likes to wake up to a breathtaking view and Iceland offers some of the best on the planet. Would you like to see a shimmering glacier or a giant waterfall first thing in the morning? Read our guide to learn about camping in Iceland...

Iceland is one of the best countries in the world for travelling solo: It’s safe, beautiful and filled with excitement and adventure!

If you're an adrenaline junkie and coming to Iceland for an adventure, then check out this blog for what to do on your visit!

11 Best Places to Eat in Reykjavik