Menu
More
Jessie Smith
|April 10, 2020
Jessie is a writer from Atlantic Canada. Aside from traveling, she enjoys sports, cooking, and music.

Traveling as a vegan can be a bit tricky, especially when you don't know the language. Here is a guide to begin a vegan in Iceland starting with Reykjavík and then slowly I will add restaurants all around Iceland for everyone to enjoy whilst traveling in this paradise we call home.

All You Need to Know About Eating Vegan in Iceland

Searching for vegan food in Iceland? No problem! You can find delicious vegan food in almost any place across the country. In fact, Iceland is known to be one of the most vegan-friendly countries in the world.

From ice cream parlors to fast food joints, vegan lovers can find it all in the land of fire and ice. In this guide, find all you need to know about eating vegan in Iceland.

Iceland is a vegan-lover’s paradise

For a country with traditional dishes made from puffin and shark meat, it may come as a shock that Iceland is one of the most vegan-friendly destinations in the world. On top of the long list of vegan-friendly restaurants, travelers can easily can vegan food in Iceland supermarkets around the country. Veganism is so popular in Iceland that the country even has a Vegan Guide to Iceland app. You can download the app onto your phone to find a list of great vegan and vegetarian restaurants in Iceland.

To help you on your quest for the best vegan food in Iceland, here are the top 12 vegan-friendly restaurants in Reykjavik:

The Coocoo’s Nest is a small family-run restaurant that has quickly become one of the most popular restaurants in Reykjavik.

Though not exclusively vegan, the restaurant menu includes great veggie options that even meat-lovers will enjoy. Their house-made vegan dishes include vegan pizzas, tasty sandwiches, and a delicious cashew aioli sauce.

Dining on a budget? Then Reykjavik Chips is the way to go

Reykjavik Chips features the best fries in the city. Owned by a group of friends united by their love of fries, this trendy place is perfect for a midday meal. Their vegan mayo is a big attraction for veggie chip lovers.

If you’re looking for cheap eats in Reykjavik, Reykjavik Chips is also known for their great deals.

Núúluskálin is an affordable noodle bar where you can make your own noodle dish with flavorful vegan broth and fresh toppings.

The restaurant is great for both take-out and dining in. The staff is friendly, the price is fair, and it’s one of the best places to go if you like your food hot and spicy. Núúluskálin is highly recommended for vegan and non-vegetarian eaters alike.

Hraðlestin is a family-owned Indian restaurant with three locations in Reykjavik. The restaurant offers the best Indian vegetarian food in Iceland made by professional chefs using spices imported from India.

The restaurant is a heaven for vegans, especially on Vegan Wednesdays when it features its special vegan thali at a discounted price. All of Hraðlestin’s meals are created with fresh, preservative-free ingredients.

Gló is your go-to place for fresh and healthy vegan options in Iceland. An award-winning restaurant in the heart of Reykjavik, Gló is known for serving delicious local food in a relaxed atmosphere.

At least 50% of Gló’s menu is organic. They offer wonderful vegan options such as lasagne, soups, burgers, and a wide-range of wraps. The restaurant even features a vegan children’s menu.

Ramen Momo features the greatest ramen in Reykjavik and a long list of tasty vegan eats. This small and charming restaurant has a friendly staff who are happy to accommodate vegan customers.

Vegans flock to Ramen Momo for its homemade ramen noodles — one taste and you’re hooked!

This fast food joint is worth the visit

Jomm is a well-respected vegan street food restaurant that offers the best vegan burgers in Iceland. Aside from its burgers, Jomm fans also rave about its Jomm Boxes, which include a mix of meat substitute and potatoes covered in flavorful vegan sauce.

This fast food joint is tucked away at an upscale food court inside Kringlan Shopping Mall in Reykjavik. Jomm is an absolute must for vegans searching for a tasty and affordable meal out.

Bánh Mí serves up the best Vietnamese food in the city

While mostly famous for its Vietnamese sandwiches, Bánh Mí is a popular hit amongst vegans because of vegan-friendly options like its veggie spring rolls.

17 Sortir is a retro vegan bakery in Reykjavik. The shop specializes in beautiful vegan cakes and cupcakes that melt in your mouth they’re so good. The name “17 Sortir” comes from a famous book written by Halldór Laxness, Iceland’s one and only winner of the Nobel Prize in Literature.

Located in downtown Reykjavik, 17 Sortir bakers create delicious vegan desserts that not only taste great but also look like works of art.

Prepare to enter an ice cream paradise when you head to Valdís. On top of its top selection of dairy options, this little ice cream parlor rotates 2-4 vegan options at a time. They’re especially known for their amazing sorbets and vegan cones.

If you’re planning to head to Valdis, be ready to wait in a line-up. This shop has been busy since the day it opened — a sure sign that it has the best vegan ice cream in Iceland.

Do you love cats and vegan food? Then a visit to Kattakaffihúsid – Iceland’s first cat café – should be on your agenda when you’re in Reykjavik.

Choose from a small but delicious menu full of vegan food options as you meet friendly and playful kitties.

All cats are up for adoption. In the meantime, the café acts as a safe and loving shelter for them while they search for a future home.

Mat Bar is a restaurant and bar in downtown Reykjavik. It offers a small and seasonal menu

made from local food and ingredients.

While the menu isn’t entirely vegan, you can choose great veg options such as dumplings and tacos. If you’re looking to treat yourself, Mat Bar is also a top spot to grab a high-end cocktail.

Want to find even more cheap eats in Reykjavik? Then check out our list of the city’s best meals for under $10!

Have you tried any of these? Do you know more I should add to this list? 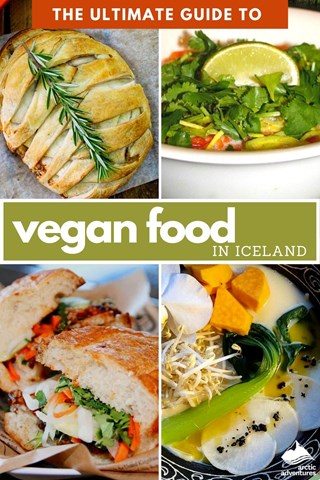 4 Days Eating in Reykjavík Without Blowing Your Budget

Spending time traveling you often spend much of your money of food especially when traveling to Iceland. Iceland can be quite an expensive place but there is a way to do it on a more cheaper matter.

11 Best Places to Eat in Reykjavik

The Best Food on the Golden Circle

Driving the Golden Circle is a great opportunity to explore local food and other activities along the way. Here are some of my favorite foodie stops along the famous route. Make sure you don't miss out!