Menu
More
Sofie
|October 1, 2019
Sofie is a free-spirited journalist from Kentucky who lives a nomadic lifestyle, and spends much of her free time in airports on layovers. Hobbies include dancing and sipping bourbon.

You don’t need a spaceship to get to Mars — just a snowmobile, crampons and a harness.

You don’t need a spaceship to get to Mars —  just a snowmobile, crampons and a harness. A group of Icelandic researchers are testing out a new spacesuit by embarking on an “extraterrestrial” mission here on Earth.

Headed by the Iceland Space Agency (ISA), this was their first expedition. The group traveled to the most remote landscapes of Iceland to test human capabilities on Mars and to collect data.

Designed by Michael Lye, a senior critic and NASA coordinator at the Rhode Island School of Design (RISD), the MS1 Mars analog suit was not created for use on Mars, but instead for analog studies on Earth. These studies will determine how people function on the surface of other planets.

Joined by the Explorers Club, a professional society of scientific exploration and Benjamin Pothier, who studies I.C.E. [Isolated, Confined, and Extreme] environments, the group trekked across Vatnajökull, Europe’s largest glacier, and into the active volcano that lies beneath, Grímsvötn.

A popular spot for glacier hikes, Vatnajökull Glacier covers five or six active volcanoes. One of them, Grímsvötn, is the single most active volcano in Iceland.

Grímsvötn is one of Iceland’s most remote terrestrial analogs. Terrestrial analogs are places on Earth that mimic the environments of other planets or moons. They can potentially provide insight into Martian life. Iceland is unique in this sense.

There are multiple locations in the country where the terrain, geology and intense conditions are similar enough to Mars to operate these missions successfully.

“One very important role of analog missions is to ensure that participants feel, act and believe in what they’re doing so that the mission provides useful data for what might happen on Mars,” said MS1 designer Michael Lye.

Living on the remote site for six days, the team conducted the same type of tests and activities they would perform on Mars

Lit by almost constant sunlight, the group collected samples and traversed the rugged terrain. Each participant would spend one to two hours in the custom suit. During the six-day expedition, the group lived in the Grímsvötn Mountain Huts, complete with bunk beds and no running water.

While we still can’t predict what a Mars mission will look like, it will require simulation training similar to what the team underwent

Helga Kristín Torfadóttir, an Icelandic geologist, glacier guide and drone pilot, tested the suit by climbing the face of an ice cap

“I was testing the suit as to how a geologist on Mars would perform in the field. So I was sampling rocks, operating a LIDAR laser and observing the pros and cons of how easy or difficult everything was,” she told Arctic Adventures.

The impressive 27-year-old holds a master’s degree in volcanology and petrology and is currently studying for a PhD in the same field.

“It really came in handy, especially with the climbing but also driving on the Vatnajökull ice cap,” she explained, adding that future astronauts will have to learn from the geography of this area.

“There is a glacier on Mars and also cliffs that astronauts might have to climb. But this was just the first mission and the suit will be updated based on what Michel Lye, the designer, learned from this experience.”

While most of us might want to stick to snowsuits for our glacier adventures, Torfadóttir said the suit was comfortable

“It felt very nice. Michael Lye has done a great job in making the suit very comfortable and also so it can fit a lot of body types and people with different heights. It is 20 kg so I got tired after around 2 hours, but the weight is mostly transported to the hips, some weight on the shoulders.”

You can check out more photos of Helga Kristín Torfadóttir and her team’s expedition on her Instagram: geology_with_helga

This isn’t the first time that amazing Icelandic landscapes have been used to represent other planets. Blockbuster movies including Interstellar and Star Wars are among the most famous movies filmed in Iceland. 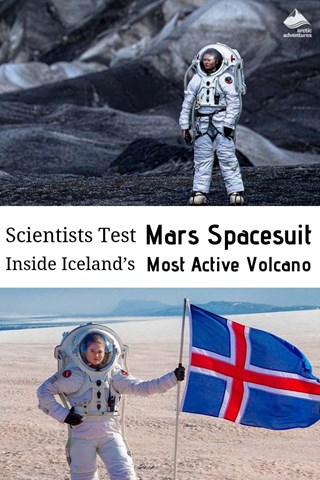 7 Charming Small Towns in Iceland You Must Visit Now

Looking for new holiday adventures? Forget overcrowded cities with thick smog and long lines to the Eiffel Tower or Big Ben. Step off the touristy tracks and enjoy the old-world charm of Iceland’s small towns.

The Ring Road 2 in Iceland’s West Fjords is a gateway to the least visited and most stunning nature in the country. Wind your way along, jagged coastline to discover Iceland’s best wilderness, wildlife, and local culture. Travel this new ro...