Icelanders are an interesting nation. We were isolated here on this island of ice and fire away from everyone else for a very long time and sometimes I think we didn't fully get the memo when things went out of style or weren't the right way to behave anymore. Here I will go over the super Icelandic cultural things that still exist here!

Icelanders love licorice, this is just a fact. We all have a strong opinion on which is better, with or without marzipan and we are not afraid to share our thoughts on this with the world.

It always comes as much of a surprise when foreigners, try our pride and joy and don’t like it.

“What! Black licorice isn’t the absolute best thing you have ever had?”

We put black licorice into anything we possibly can, we put it in cakes, ice cream, candy bars and even recently our skyr!

Tell Icelanders you like black licorice and we instantly love you.

2. Dating within the family

I am probably pissing off a lot of Icelanders writing this, but this is only sensitive because it’s true! Even though it might not have happened to you it has to me…. Yes I went on a date with a random guy only to find out our great, great grandparents were siblings. This is pretty related, right? And our grandmothers were friends, awkward. Of course, we didn’t know we were related beforehand and I think most (at least sane people) wouldn’t date their frænka or frændi (get the translation here) on purpose but this can happen!

More about dating in Iceland.

This is basically, the famous drinking game never have I ever BUT in Iceland, this is probably the most honest setting you will ever find an Icelandic person in. No one would EVER lie in Ég hef aldrei. If you were to ask Ég hef aldrei drepið mann (e. I have never killed a man) and someone at the table would have, you would get a confession then and there. Come to think of it, police should try this game.

No, we are not trying to get our babies kidnapped. That just doesn’t happen in Iceland, I mean, where are you going to go? Iceland is an island, with the population of 330.000 you can’t really hide, can you? We dress our babies in warm clothing, most of the time wool the closest to the skin and then we put them into these amazing sleeping bags, then the carriage is closed with a breathable blanket and the baby will have a wonderful nap in a fresh and clean natural air conditioning. The only bad thing about this, they don’t make the carriages in adult sizes.

You will see baby carriages in front of houses, bookshops, restaurants, cafés and yes, pretty much everywhere. Even when kids start going to the kindergarten the smallest bring their carriage and you will see a line of carriages with sleeping babies outside.

5. Sucking boogers back up your nose and never ever blowing your nose

This we will never apologize for, we will until the end of time, prefer sucking up our boggers instead of going the international civil way and blowing our noses. It’s cold here pretty much all the time, heavy winds and all of that so about 10 months out of the year we have a cold. I think I am speaking for all Icelanders when I say we have kind of just stopped noticing it. It isn’t until it starts touching your lips that you might think about blowing your nose BUT at this point, you leave the room, go into the bathroom or at least turn away from everyone and blow your nose. This is the least you can do, I mean really, no one likes the sounds!

So a friendly suggestion, if you find yourself in Iceland with a cold DON’T just go blowing your nose in public. Go into a restroom and do it or just do as the locals do and suck it in!

The police in Iceland are wonderful people who do a great job. Their job isn’t easy but they don’t carry guns and often let you go with just a warning that next time try to break when you see that yellow light, don’t go faster. When they heard of a little child that was afraid of the police they paid a visit to show that there wasn’t anything to be afraid of, that they were only there to help.
The police have a Facebook account, a Twitter, and an Instagram account.

On Facebook, they share important things and ask the public for help with finding out things. On Twitter, they answer questions and sometimes even tell you where they will be with their speed radar that day. On Instagram, they show you into their lives and people have simply fallen in love!

Photos of police with kittens, having ice cream, an officer in a swing, using snapchat filters and oh so much more. This is definitely one of our favorite accounts!

The pictures speak for themselves.

Here there are two things I am going to mention:

The most usual way is that we take up or father’s first name and then put -son or -dóttir depending on if we are boys or girls. Here is an example of a man named Jón who has a boy and a girl (see nr. 2 on photo)

In recent years the naming system in Iceland has developed. Like most things in Iceland, the system has been going more towards equality for the sexes. More and more people are taking up their mother’s first names as well. For example Reykjavík’s mayor.
His name is most often written like this: Dagur B. Eggertsson but many don’t know that the B actually stands for Bergþóruson because his mother’s name is Bergþóra (see nr. 3 on the photo)

But still most just use their father’s first names.

When people get married in Iceland they don’t take up their spouse’s name. This especially comes in handy now in the modern times when the divorce rate is high and people might marry 2-3 times in their lives (see nr. 1 in the photo).

In Iceland, you cannot just go naming your children whatever you want. There is a list, a very long one, but still, a list that you get to choose from. It’s focused on female and males names and each for each gender you anything from 2000-4500 options.
The reason this is such a wide number is that if there is a tradition for the name OR you can find it anywhere in the Icelandic literature (sagas and such) then it’s automatically approved even though it’s not on the list!
Now you might ask, approved? Who approves or declines names?
Well then the naming committee comes in, Mannanafnanefnd would roughly be translated Human-name-committee is made up by a couple of experts in the Icelandic language, law and other things that come in handy when deciding what can be used.

If you want to name your child a name that has not been used before, it will have to go through the committee and they will decide if you can use it or not.

An example:
Let’s say you want to name your child Straumur e. Stream. This has not been used before as a human name in Iceland and you need to go get it approved.
The name is found in Iceland, it has all Icelandic letters, it has a meaning, it’s unlikely to cause bullying, it works with the Icelandic language so Straumur is likely to be allowed.

Let’s try Jennifer, it has no meaning in Icelandic, it doesn’t work with the Icelandic language so it’s unlikely to be allowed.

But you never know, I mean the committee approved Bambi.

Many Icelanders are though strongly against this committee and think that they should be able to name their kids whatever they wish. This has been a topic in Iceland for years and is actually now being discussed in Parliament. If everything goes as it seems now the committee will be abolished and you will be able to name your child Satan. YAY!

Now you might be thinking “but everyone does fireworks on new years” but this is something quite different. In Iceland EVERYONE buys fireworks. Most of us buy them from the Search and Rescue team, this is actually their most profitable fundraiser over the year, and argue that because of this it’s okay to spend loads of money on them. The more you spend on fireworks the more you are giving to the Search and Rescue so that can’t be a bad thing. A couple of days before we start and on the day of, there is just no stopping. The action reached a high point at 00:00 but then it’s a complete madness. The whole sky is lit up and people, who have been drinking for hours now all go out to play with fireworks, always a great idea!

9. Taking your shoes off inside

Electricity is cheap in Iceland, this is due to our (it seems) endless green energy. So we heat our houses a lot and when it gets too warm, we just open up a window. No, this isn’t a joke. IF you are living some place where energy is not cheap NEVER get an Icelandic flat mate, this will cost you!

We take the longest showers, never turn off lights and really test the thermo.

This also means that our houses are warm, floors included SO we don’t wear shoes inside. Sometimes we don’t even wear socks! In new houses, the heating of the house is even sometimes just in the floors. This is heavenly! 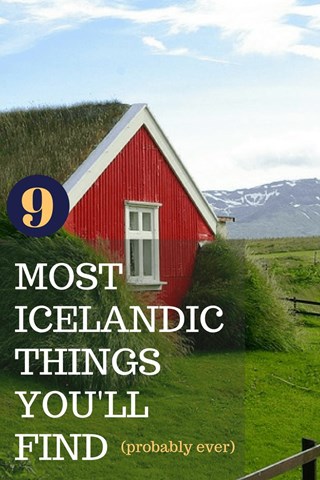 The Ultimate Guide to Icelandic Candy

Want to know more about Icelandic candy? Prepare for a lot of liquorice! Here Inga tells all about the Icelandic candy options you have. We recommend trying them all, a few times is advised.

All about the New Years Eve in Iceland

New Year is an incredibly popular time to come to Iceland. Reykjavík is one of the most amazing places to spend New Year, this little city on the edge of the Arctic knows how to celebrate big time! See in the New Year with the most stupendo...

The dating life in Iceland has long been a heated discussion, but what is really true about the things people say about it? Where do people meet in Iceland and what are the dating rules in the country of ice and fire?