Icelanders might not be able to make vine but we can sure make beer and have mastered it. Here you have it a list of the Best Micro Breweries found in Iceland, some tips on Icelandic craft beer and anything a beer lover might want to know before visiting Iceland. Drink in the Icelandic culture!

Did you know that Iceland is a beer paradise? Between all its fresh and clean water, and creative microbreweries, there are tons of reasons to say SKÁL!

Since 2006, the Icelandic brewery community has grown at a rapid speed and today there are as many as 26 breweries across the country. The first one was Kaldi, Árskógur. Today it’s one of the most popular brands in Iceland and has even opened up the famous Beer Baths in North Iceland.

The Beer Baths are a fantastic facility where you bathe in fresh beer and live beer yeast. Apparently, if you withhold from showering for a few hours afterward, the beer will have excellent effects on your skin and body. The treatment is said to be very cleansing for the skin and to have a really positive effect on health. All of the beer is brewed by the Kaldi Brewery. You can even enjoy your own open tap while in the bath! There are two options for visitors, two and two in private baths or bigger tubs outside. More info on the Beer Baths here. It’s an ideal day trip the next time you’re in Akureyri.

But enough with the Beer Baths and Kaldi! Here are other microbrews that deserve your attention. Drink up fellow beer lover, you’ve come to the right place!

The Lady brewery is the first female-only brewery in Iceland. Their brewery doesn’t have a stable home so they are more a rover brewery. At this point in time, they brew beer at Ægir Brugghús, Reykjavík.

Their bottles are beautiful thanks to a talented graphic designer. Actually, the whole team is quite artistic! The brewers went into brewing quite by accident. Originally planning on making a scent, they ended up with a beer! Funny, right? Their beers are all top-notch and everything I have tried has been delicious.

Where to Find this Brew: You can often catch their beer at Skál, Hlemmur Mathöll, Hlemmur Square and Kex.

What was supposed to be a black IPA collaboration with our good friends at @brewski.se ended up as a tart blueberry sour made with skyr. Things change quickly but we couldn't be happier with the result. Will hit the taps shortly, stay tuned. #kexbrewing #brewski #jonrikibrewery #craftbeer #beerporn #blueberry

The Kex Brewing is a project driven by a group of people with varied experience but the same ambition for great beers. The Kex Brewing group brews craft beer for draft, cans, and bottles in limited release. They are relatively new in the game, even for Icelandic standards. They offered their first Christmas beer in 2017. They say: “Good beer makes the world just a little bit better of a place.” You can find more info on the Kex Brewing Facebook page.

Where to Find this Brew:

Steðji is one of the “farm breweries” located in the beautiful Borgarfjörður region in the West of Iceland. These brewers are known for their freshness and odd flavors. They’re not afraid to try something different, like algae and chocolate beer. They offer guided tours around their microbrewery. The minimum for a tour is 6 people. Further information and appointments can be found at their website.

Where to Find this Brew: Their beer is available at the ATVR (liquor store) and at Microbar in Reykjavík.

Segull 67 is a small, family-owned craft brewery in the charming little fishing village in North Iceland, Siglufjörður. Three generations help out making the beer and its located in an old fish factory that has been altered to meet every standard of a good brewery. The name Segull means magnet and that is where the logo comes from; A magnet needle pointing North in a Compass. The number 67, has long been a lucky number in the family having to do with trucks and ships.

Where to Find this Brew: You can book a brewery tour on their website or buy their beer at most ATVR, liquor stores.

The one in the Westman Islands. Owned and ran by a group of local friends who had long had a dream of making their own beer, the Brothers Brewery has been in business since January 2016, after starting to experiment in 2013. Many of their beers are named after famous Icelanders and it’s really fun to get the story with each glass.

Where to Find this Brew: You will find them easily in Vestmann islands or sometimes they have kegs at Kex or at Skál at Hlemmur Mathöll.

Ölvisholt is another farm brewery on the South Coast of Iceland, near Selfoss. Located on an old dairy farm, this microbrewery was founded by two beer-loving neighbors. Ölvisholt’s old cowshed has been rebuilt and is now serving as a taproom open to visitors. On tap, they always have their latest brew and of course all their classics.  You can drop in, book an open brewery tour or special tour for your group. Ölvisholt has been in the business since 2006. They’ve started to export their beers to USA and Sweden with more countries lined up in the future.

Where to Find this Brew: Their beer is sold at most bigger bars and at the ÁTVR liquor stores.

Gæðingur Micro Brewery is located at the farm Útvík in a fjord in the North of Iceland, Skagafjörður.  The fjord is long known to be the cradle of the best Icelandic horses, so it was more than fitting to name the company Gæðingur – “A Great horse.” The Brewery was founded in 2011 and happened almost by accident. The stable that had been used to cattle fell into disuse around the same time the owner and a friend were returning from a course in brewing in Denmark and the UK. They figured they couldn’t waste the opportunity and started brewing in the stable, which is still their brewing station today. For more info on Gæðingur, check their Facebook page.

Where to Find this Brew: You can taste their beer at Microbar in Reykjavík or buy at ÁTVR, the liquor store.

A dream of a couple and friends to serve the best pizza and delicious home-brewed beer with it has come true. Located in the geothermal paradise Hveragerði Ölverk has been in business since 2017, starting with pizza and quality imported beer but now also THE FIRST GEOTHERMALLY BREWED BEER IN EUROPE. This is one for the bucket list. Find more info about them on their Facebook Page, Ölverk.

Arctic Adventures visits Ölverk and tries their pizza and beer on their new Golden Circle Local Food tour and people are already obsessed with it! Simply the best way to do the Golden Circle.

Fun fact: The couple worked as River Rafting tour guides for Arctic Adventures for many years so Ölverk has a special place in our hearts.

Pumpkin (not so pale) ale? Why not. A bit of jalapeño and fresh cilantro? Pretty decent, not quite there yet, hopefully in time for the @annualicelandicbeerfestival #holmurrules #howlongforbeer #craftbeer #nanobrewery #lífiðmaður #jonrikibrewery

The only one on the South East coast, Jón Ríki or John the rich is a family-owned and operated business that focuses on local produce and quality malts. This makes for excellent quality and fresh food, plus some innovative craft beers. Their location, near Höfn, is a perfect stop for those heading out to Jökulsárlón, Skaftafell area or doing the Ring Road. Get more info on Jón Ríki on their Facebook Page, Jón Ríki Brewery & Restaurant.

Where to Find this Brew: Jon Riki Brewery

NEW BREWERIES | To be on the lookout for | Will be updated

They are just getting in the game now in 2018, but Malbygg is well worth looking out for. The duo behind the brand are the brothers Andri and Ingi, who have for a while been importing amazing beers and are quite known in the beer scene here in Iceland. With them is Bergur, the brain behind Bryggjan Brugghús. They will focus mainly on IPA, hazy NEIPA, imperial stout and sour beer, served in either keg or can. Follow their Instagram to see when their beer starts to flow for us to buy!

Opening up in fall the RVK Brewing Company is one of the new ones. The company was founded 1st of March (Iceland’s national beer day, 2017) and the team started brewing right away.

They will be located in Skipholt, 105 Reykjavík and will offer beer tours in the brewery, this we know now and are excited to fill you in once more info is realized!

Have you ever tried a sip of an Icelandic beer? Share with your beer loving friends! 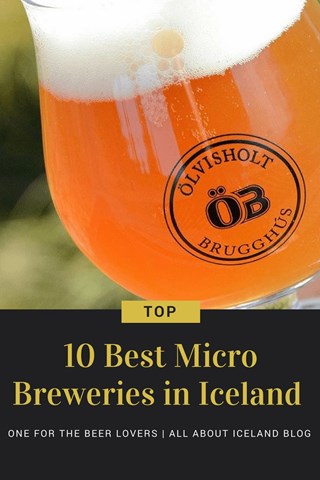 The world famous Reykjavík nightlife guided by a local

Icelanders make great beer, that's a fact! We can't make wine so we focused on beer and since the beer was banned until 1989 we brew it with passion and privilege. Are you looking to know about the most popular beer in Iceland? Where to buy...

Christmas, the time to eat and drink until you just can’t anymore. This is the time to be merry and what better way to celebrate than to say “SKÁL” with friends and family with some great Icelandic Christmas Beers.

Here Inga covers the best of the happy hour scene in Reykjavík. Where to drink, what to expect and when it's the most budget-friendly for you to drink in Reykjavík.