Embark on a journey to iconic sites on the Golden Circle and a thrilling hunt for the Northern Lights!

Join our Minibus Golden Circle tour to visit the most famous places in Iceland: powerful Gullfoss, the most popular waterfall in Iceland, Thingvellir National Park, where tectonic plates collide, and the erupting geysers in Haukadalur Valley. Once darkness falls, we take to the roads on a hunt for the glittering Northern Lights.

Your guide will also take free photographs of you so you can keep the memory alive!

This minibus trip is a combination of our very popular afternoon Golden Circle tour and an evening Northern Lights tour. Book this tour to save on both! 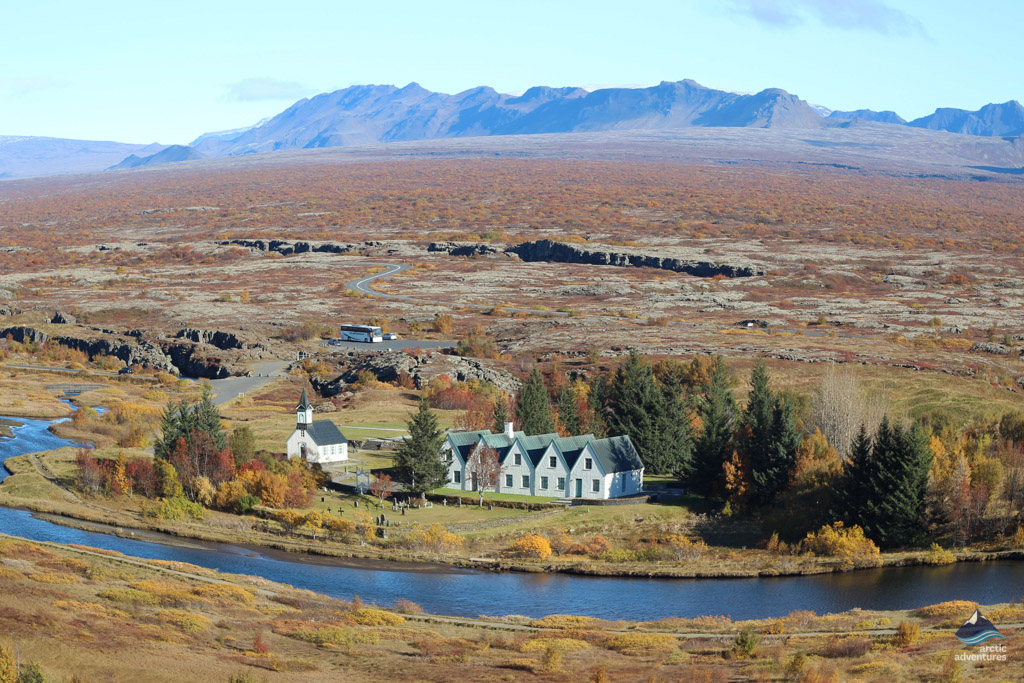 Travel through Iceland’s beautiful countryside to Þingvellir National Park, the impressive site of Iceland´s historic parliament, the Alþingi. Founded in 930 c.e., it’s the oldest parliament in the world still in existence. On a sunny day, you can stand beside the law rock and look out over the valley. This incredible UNESCO World Heritage Site is also one of the great geological wonders of the world. The rift valley is the result of the ever-shifting Eurasian and North American tectonic plates, slowly moving apart over eons.

Next on the agenda is the Geysir hot spring area. The Great Geysir is no longer active, but Strokkur, a nearby erupting hot spring, spouts huge jets of superheated water every eight to ten minutes. These scalding expulsions often soar skyward to 25 m and sometimes even up to 40 m.

Visit the magnificent Gullfoss Waterfall (the Golden Falls). The river that flows to the falls is known as Hvítá (the White River) and originates at Langjökull glacier. The roar thunders down through the rugged canyon, dropping 32 m in two stages. You’ll likely catch sight of the golden-hued spray that lent this waterfall its name, and, maybe if you’re lucky, a rainbow – remember to make a wish!

Next, you’re dropped off downtown in Reykjavík, close to cafés and restaurants where you have time to enjoy supper. You will be picked up outside your hotel for your northern lights tour at 20:30 (8:30 p.m.).

We’ll drive you out to the best, secret spots in the countryside to see the aurora borealis in the dark sky. The moment when you spot their shimmering, jewel-bright colors is always awe-inspiring and magical. The most common colors are green and yell...)

We’ll drive you out to the best, secret spots in the countryside to see the aurora borealis in the dark sky. The moment when you spot their shimmering, jewel-bright colors is always awe-inspiring and magical. The most common colors are green and yellow, with occasional white and blue. Less common are violet, purple and rose northern lights. Deep red auroras, the rarest in the world, are more common in Iceland than anywhere else. Unfortunately, since the lights are a natural phenomenon, we can’t really guarantee that you’ll see the lights, but our guides do monitor the aurora and weather forecasts closely to increase your chances.

Onlookers have been fascinated by auroras for millennia, and it was only in the last few decades that scientists discovered they are caused by the interaction between the Sun and Earth’s magnetic field. As charged particles from the sun, known as solar wind, enter the earth’s atmosphere, they start to collide with gaseous particles and manifest as these glittering lights.

The tour returns to Reykjavík around midnight, when you’ll be dropped off at or very near your hotel.

Pick up is at 12:00 pm from your hotel or a nearby meeting point in Reykjavík. Picking everyone up can take up to 30 minutes, your patience is much appreciated.Available pick-up points: Arctic Adventures’s pick-up list.)

Pick up is at 12:00 pm from your hotel or a nearby meeting point in Reykjavík. Picking everyone up can take up to 30 minutes, your patience is much appreciated.
Available pick-up points: Arctic Adventures’s pick-up list.

As the success of the northern lights tour is heavily dependent on weather conditions, we reserve the right to cancel the northern lights part of the tour until 18:15 on the day of the tour if the aurora forecast is not looking good. If the tour goes ahead and no northern lights are seen we offer clients the chance to join another evening’s departure free of charge upon availability. Note that you need to contact us to re-book.

Chase the Auroras in a comfort Jeep from Reykjavik