This combination day tour will take you on a scenic ride in the Reykjavik countryside and then allow you to see the wonders of the Golden Circle. 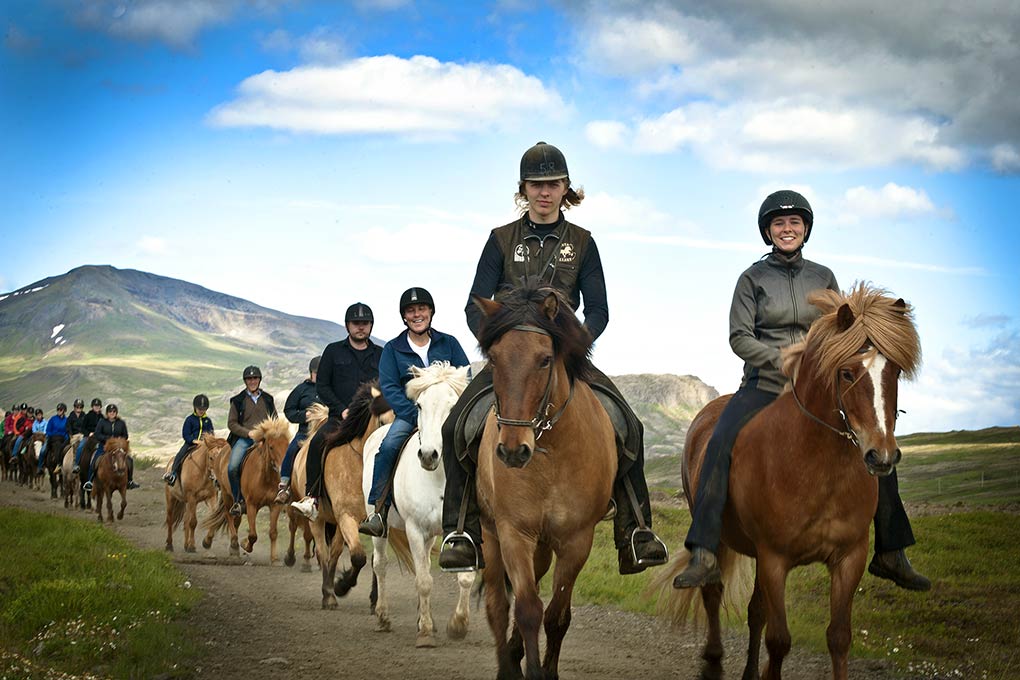 We’ll collect you from your hotel or one of our designated pick-up points in Reykjavik and make the short drive to our stables. You’ll meet your friendly guides, gear up and say hello to your traditional Icelandic horse. We’ll make sure that each horse is appropriate for the age and level of experience of each rider. Then we’ll push out into the rolling Icelandic countryside for a two-hour ride that will take us through some stunning natural scenery.

There are three options for the ride, depending on the weather conditions. We’ll either trek through a luscious valley where our stables are located, the riverbank route that crisscrosses sparkling blue streams or the hillside route that takes us past the Tröllafoss waterfall, renowned for being where trolls bathe on a full moon. You’ll also get to know your sturdy Icelandic horse, which is totally unique thanks to Iceland’s equine import regulations. Once the tour is over, we’ll head back to the stables and enjoy a delicious hot drink, before we head to the Golden Circle area.

The afternoon begins in Þingvellir National Park (Thingvellir) – a UNESCO World Heritage Site that combines geological wonders and historical significance. Alþingi, the Icelandic Parliament, was founded on a snowy plain in Thingvellir in 930, making ...)

The afternoon begins in Þingvellir National Park (Thingvellir) – a UNESCO World Heritage Site that combines geological wonders and historical significance. Alþingi, the Icelandic Parliament, was founded on a snowy plain in Thingvellir in 930, making it one of the oldest democratic intuitions in the world. It’s also one of the only places in the world where you can walk between two continents. Thingvellir lies either side of the Mid-Atlantic Ridge, where the North American and Eurasian tectonic plates are gradually moving apart. Creating a rugged rift valley where you can see two vast continents pulling away from each other.

Our next stop will be the Geysir geothermal area. The, now dormant, Great Geysir was the first geyser to be mentioned in English and is where the word originates from. While the nearby Strokkur throws huge jets of boiling water into the air every 8 minutes or so. These molten torrents of water can often reach up to 30 meters into the air, making for a spectacular show and wonderful photo opportunities.

Our final stop will be the famous Gullfoss (Golden Falls), which gives the Golden Circle route its name. It is the most popular waterfall in Iceland and is renowned for the golden colour its water takes as it cascades into the luscious valley below. Gullfoss is undoubtedly the most beautiful waterfall in Iceland and will provide photos and memories that will last a lifetime!