Small Group Experience in a Minibus

Golden Circle express afternoon tour to the most popular attractions in Iceland, see Strokkur erupting boiling water skywards at Geysir, feel the power of Gullfoss waterfall and discover the unique geology and history at Þingvellir.

This minibus tour is an express version of the Golden Circle – giving you a great small group experience of the three most popular attractions in Iceland.

I only had time to do the afternoon Golden Circle tour (from Reykjavik and back) but it was a great experience. Loved all the sights, along the way as well as at the three stops (beautiful Thingvellir National Park, impressive Geysir geothermal area and stunning Gullfoss), and got some fantastic photos. Our driver was good-humoured and very informative. I learnt a lot of interesting things about Iceland from his commentary. At the stops, instructions were clear (where and when to reboard the bus) and everything ran smoothly. Recommended! 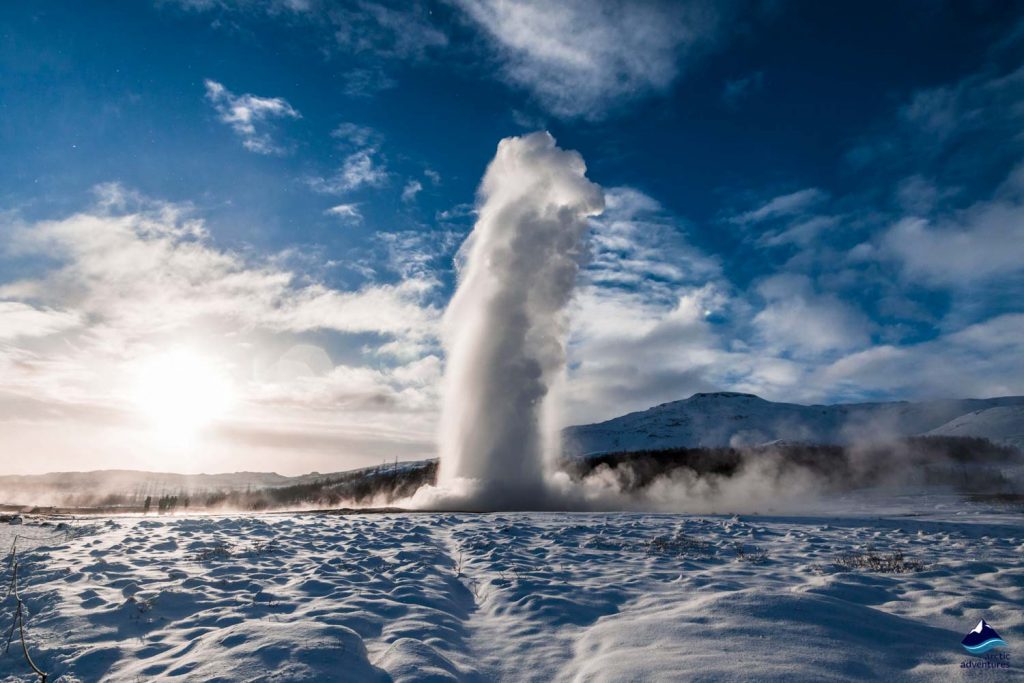 You travel through beautiful scenery to Þingvellir National Park (Thingvellir). This is one of the most incredible geological wonders of the world and also the place where Icelandic history was made. The Icelandic Parliament, Alþingi, was founded here in the year 930, making it the oldest continuously existing parliament in the world. The Eurasian and North American tectonic plates have been slowly edging apart creating a stunning rift valley which runs right through Þingvellir. The rugged cliff of this valley forms a dramatic and atmospheric backdrop to the place where the Law Speaker, the supreme Icelandic Chieftain would stand to proclaim the law. A flag marks the law rock (lögberg) where the greatest decisions in the history of the Icelandic people were declared. What an incredible photo opportunity!

Next on the agenda is the Geysir geothermally active area. Great Geysir, the spouting hot spring whose fame gave us the English word ‘geyser´ to describe this activity, is inactive nowadays. You will see Strokkur, a nearby erupting hot spring which erupts huge volumes of superheated water every 8 to 10 minutes. These boiling water spouts often soar to 25 m but sometimes the scalding jets will be propelled 40 m skywards. Watching a geyser erupt is always a stunning and incredible moment.

The final highlight is the most popular waterfall in Iceland, the magnificent Gullfoss (the “Golden Falls). The river flowing through Gullfoss is the mighty Hvítá (the White River), this river originates at Langjökull glacier, the 2nd largest glacier in Iceland. Feel the spray in the air as the thundering torrent is forced through the canyon, dropping 32 m in two stages, pivoting as it does so. You will see plenty of golden hued spray around Gullfoss, the Golden Falls!

Pick-up Information: Pick up is at 12:00 pm from your hotel or a nearby meeting point in Reykjavík. Picking everyone up can take up to 30 minutes, your patience is much appreciated.Available pick-up points: Arctic Adventures’s pick-up list. Return Ti...)

Pick up is at 12:00 pm from your hotel or a nearby meeting point in Reykjavík. Picking everyone up can take up to 30 minutes, your patience is much appreciated.
Available pick-up points: Arctic Adventures’s pick-up list.

The tour returns to Reykjavík around 19:00 – please bear in mind that the weather conditions in Iceland can sometimes cause delays.

Sort By newest
1- of 3 reviews

Reviewed on March 10, 2020 by Brad From our post-trip system

Our tour guide was fantastic and gave personal stories and historical facts. But, also did not talk too much and let us enjoy the views. The mini bus was comfortable and had power to charge our phones. The small group tour was just about right. We were allowed enough bathroom breaks and even got to stop one last time for coffee. All around enjoyable experience.

Reviewed on March 06, 2020 by Adriana krambeck From our post-trip system

My boyfriend and I really enjoyed our golden circle tour experience. The guide was fantastic, funny, pleasant and knowledgeable. It was a great afternoon and the whole tour scheduling was perfect 👌

Reviewed on February 17, 2020 by Venesia Hurtubise From our post-trip system

The tour was wonderfully easy to enjoy. The bus picked us up at the hotel, drove us out to our first stop and gave us plenty of time to use the restrooms, stretch our legs and buy a snack. The rest of the trip was sight after sight. The guide even took us on some additional side-trips to meet some Icelandic horses and view some waterfalls! The guide was extremely knowledgeable and provided historic and cultural information, as well as his own personal insight from growing up in Iceland. I would highly recommend this tour for anyone who is looking to see the major sights and don't want to deal with the hassle of renting a car and navigating on your own. Plus the side-tours were areas that only a local would know!