Menu
More
Kathryn
|May 17, 2019
As part of my Event and Business Management degree, I decided to move to Iceland to join the marketing department at Arctic Adventures. I love exploring, photography and going on new adventures.

Iceland has led the world on many fronts, from social issues and law to exploration and discoveries. Here are a few of our biggest innovations…

Iceland is a bit of a paradox; ancient but forward-thinking. While Iceland is best known for its stunning, rugged landscape and its low-fi traditions like fishing and camping, it is in fact, one of the most innovative countries in the world. The locals just don’t like to boast about it!

Iceland has quietly been leading the world on several fronts, especially when it comes to social issues. This is what happens when you have an open-minded population and a long-term approach to creativity: Indeed, “innovation education” (or IE) has been a staple of Iceland’s education system for more than 20 years, where youngsters are taught how to build and create from an early age. Remember, this is the country where an astonishing 1 in 10 adults is expected to publish a book during their lifetime.

These are all symptoms and causes of Iceland’s ingenuity and creativity. You might be surprised to see how many things the land of ice and fire did first, whether they were done in recent years to centuries ago.

Vigdís Finnbogadóttir has a few milestones to her name. Not only was she the first democratically elected female president (elected in 1980), but she’s also the longest-serving, staying in the job until 1996. To put that in perspective, she was in office at the same time as American presidents Carter, Reagan, Bush Sr and Clinton!

Although she recently turned 89 (happy birthday, President Finnbogadóttir!), she’s showing no sign of slowing down. Mrs Finnbogadóttir is now working as UNESCO’s goodwill ambassador for languages and is a member of Fondation Cirac’s honour committee, a foundation launched in 2008 by Jacques Chirac to promote world peace.

4. The First Country to Jail Bankers after the Financial Crash

The financial crash of 2007/2008 rippled across the world and created widespread financial devastation that can still be felt today.

The countries affected by the crash responded in their own ways, but Iceland took a different approach than most. Instead of instigating harsh austerity measures (like many Western European countries did), it reacted differently to those directly responsible for the crash.

Iceland was the first of the affected countries to start penalising bankers. Over 25 people (and counting!) have been prosecuted for their involvement in the crash, and many were sentenced to prison time. It’s hard to estimate how many bankers worldwide faced legal consequences for the crash, but Iceland definitely leads the way: According to the Financial Times, Iceland has jailed more bankers than the rest of the world combined!

Jóhanna Sigurðardóttir has had an interesting career and personal life. Prior to becoming Prime Minister, she was Minister for Social Affairs for 17 years and has been active with trade unions for most of her professional life (including being on the Board of the Commercial Workers’ Union in the 70s and 80s).

Sigurðardóttir took the Prime Minister job in 2009 where she sought more citizens’ voices in reframing the constitution and campaigned for women’s rights (among other policies).

She has been in a civil partnership with playwright and author Jónína Leósdóttir since the 1980s, and in 2002 when gay marriage was legalized, this civil union was changed to a marriage. This makes Sigurðardóttir and Leósdóttir one of the first gay marriages in the country.

2. The First Country to Force Employers to Address the Gender Pay Gap

While unequal pay is technically forbidden in many countries, Iceland is a pioneer when it comes to addressing the issue head-on.

If a company has 25 workers or more, they must obtain an “equal pay certification” from an independent auditor. This certificate shows that the female employees earn as much per hour as their male colleagues of equal rank.

It’s a strong statement from the Icelandic government, who hope to completely eradicate the gender pay gap by 2022.

If your answer is Christopher Columbus, you might be off the mark by a few centuries and a few thousand miles.

An Icelander named Leifur Eiríksson (also known as “Lief the Lucky”) sailed to Newfoundland in around the year 1,000. He called it Vinland, and established trade between Iceland and the New World.

Lief has been the subject of much discussion across Icelandic and international culture: His adventures are described in the Saga of the Icelanders, which are among the earliest known sources of Icelandic literature. And he has been immortalised in the bestselling Japanese manga comic Vinland Saga, which is soon to be a TV series.

Statues of Lief stand in both Iceland – where it was a gift from America – and in Minnesota.

As well as being a world-leader across numerous fields, Iceland is also punching above its weight as a holiday destination. In 2017, over 2,000,000 people travelled to Iceland to take in its gorgeous nature, soak in its rejuvenating springs and bask in the country’s warm hospitality. Millions of eager travellers have walked on our glaciers and stood in our volcanoes. Maybe you’ll be next… 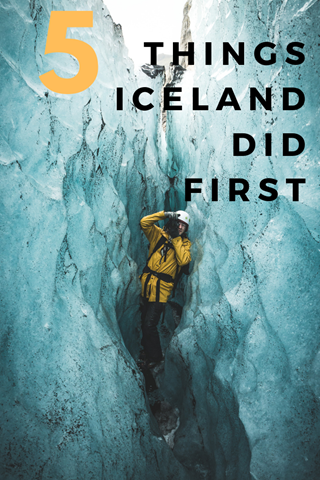 See the wonders of the South Coast & the iconic DC-3 Plane Wreck on this epic day tour!

July is the warmest month in Iceland, so it's an ideal month to visit. Here are some fun ideas on what to do when visiting this wonderful country in July!

Wondering what to read before visiting Iceland? Why not dive headfirst into some Icelandic literature, where life in Iceland is covered from the Viking age to modern times. Some fiction, some crime, some true stories. Pick your poison(nove...