Do Icelanders believe in Elves? Written by an Icelander!

Do Icelanders believe in Elves?

Do Icelanders actually believe in elves, is it a publicity stunt or maybe just a myth? What do these mystical figures look like? Where do they live? Where can they be found? Here you will find out everything there is to know, straight from the source, an Icelander!

A Swedish painting of a group of Elf women dancing

You might be surprised to hear this but during the Viking age believe in elves was strong around the Scandinavian countries. This is a belief carried to Iceland with the Norse but being so isolated we just kept on with it while the rest of them didn’t. Back in those times, elf belief was greatly controlled by fear, fear of what they might do and how they might react. Nowadays you will see a change in this. Adults are not willing to admit to believing in them, children might talk about playing with them but once you start digging you will find a lot of things that contradict the non-belief. People are not 100% willing to deny the existence of elves nor will they dismiss elves as the cause of misfortunes or accidents and sometimes even positive events!

Don’t get me wrong through Icelanders don’t believe in elves as they do in God and this would never classify as a religion. Nevertheless, many Icelanders do believe that certain things can only be controlled by the elves and will possibly change a course just to be sure. Icelanders have a great deal of respect for the elves and will take extreme measures to keep them content. Let’s start from the beginning!

First, I would like to clarify something. Gnomes, Christmas elves and Icelandic elves are under no circumstances the same! Icelandic elves are just like people, hence why they are sometimes called the hidden people. They are tall, slender, fair and often have white hair. But “how can you tell them apart from actual humans?” you might ask. Well, this can be tricky. If you look back in records you will find that there were often some small details about their appearance that could give it away. The most commonly-known feature was the peaked ears but there were others such as sharp teeth, a narrow or no space between the mouth and nose and other distinctive facial characteristics.

Elves are often considered to be intensely beautiful which is how elf-women would often in folklore tales trick men into their homes or to do a task for them and why people were less afraid of them. They are also described to be dressed in expensive and clean attire, often in light blue colors. It is evident through these descriptions that the elves were the opposite of their people in Iceland at that time, clean, fair and rich and perhaps that’s what made people want to listen to stories of them.

In conclusion: If you have to picture someone you know think Legolas in the Lord of the Rings.

Where do the Elves live?

Now this is a simple one. Elves live in rocks often nestled away in lava fields. The rock might not seem big from the outside but once you have entered a glistening and well-decorated palace awaits you. Elves are also said to have large parties, where there is plenty of food and drinks often resembling the feasts of the royals.

Can anyone see an Elf in Iceland?

In the stories you read about elves and hidden people you will often hear of grown-ups meeting them in plain sight, helping them in distress or being sought out by them. But growing up in Iceland I remember being told that children are much likelier to see them rather than an adult.

Children in Iceland often tell you about the games they play with their elf friends and for many, it is the same one for a long time. Maybe they do actually see them, or maybe this is just the Icelandic version of an imaginary friend. We will never fully know.

Maybe it’s like Santa, you will never see an elf unless you believe in the existence of elves!

1. The Origin of Elves

At the beginning of time, God made the man, Adam and woman. The woman was very unsettled and difficult and Adam couldn’t talk any sense into her. God tried stepping and persuading her in but had no better luck. Therefore God decided to create a man especially for her. Him he named Álfur (English Elf) and her he named Alvör. They became the ancestors of all elves and trolls and they can all be traced back to them.

In the 1970s Icelandic road workers were trying to finish off the Ring Road in a remote setting in Iceland. They had almost finished the assignment but to stay in accordance with the plans from the road and coastal administration they needed to remove a large rock which stood in the way. Hitherto they had not had any troubles whatsoever but now the sky went dark.

First, the machinery starts breaking down, without any reason to be found explaining it. Then things started to disappear and eventually, one of the workers broke their leg in a freak accident. All of this had taken place just in the time that they tried to remove the rock.

The workers started to think, could this have to do with the rock itself? Are we possibly trying to remove an elf rock? Are we disturbing their homes?

It is important to note that this is not the first time that the people of Iceland have plans to have something moved to a new location but run into elf-trouble in the process. Furthermore that the best resolution has proven to be leaving these rocks alone and going around it.

So, the workers did. They changed the plan a bit and went around the rock and maybe not surprisingly didn’t run into any dilemmas after that.

Jónsmessa is a Norse festival more commonly known as Midsummer which takes place in Iceland during the Midnight Sun. More precisely on the 24th of June each year. According to Icelandic folklore for this one night, cows can speak, seals become human and health will we brought upon anyone who takes of all his clothes and rolls naked in the grass dew. But that’s not all. Icelandic folklore also states that on this night you might meet some elves who will attempt to seduce you with food and gift. Assuming that you will find a crossroad with four roads all leading to a different church and sit there all night without moving! 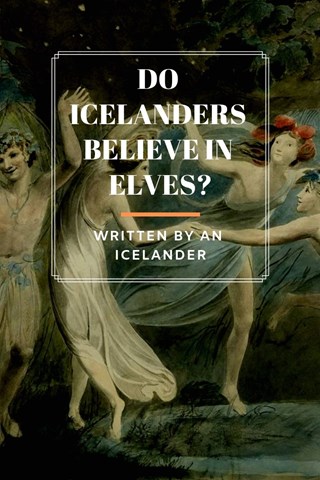