Immerse yourself in Iceland’s most intriguing highlights on our Golden Circle Superior itinerary, which also includes visits to Faxi Waterfall and the geothermal town of Hveragerði. Make the most of your time in this incredible country!

Fill your day exploring the famous Golden Circle in a small group setting with some added flair. Visit the unmissable Thingvellir National Park, Gullfoss Waterfall, and Geysir Hot Springs. We'll also stop at off-the-beaten-track spots like Faxi Waterfall and Hveragerði, a geothermal town in Southwest Iceland. In just one day you'll get a real feel for the Land of Fire and Ice.

Be amazed by gushing geysers, powerful waterfalls, and historical sites. Pack your sense of adventure and explore the best Iceland has to offer!

A week in Iceland with Arctic Adventures Tours

We found the company online and after comparing with other companies we find out that the companies we were looking have the same parent company. We booked a 2 Day tour to the South Coast, Golden Circle Superior, snowmobile and ice cave, airport transfers, Blue lagoon transfer, and Northern lights cruise. The prices across tour providers or websites are consistent. We liked that they offered 10% discount when booking 3 or more activities. We enjoyed the experiences. We had all clear days and the views were spectacular. Small groups (no more than 18). Our tour guides were excellent, specially Thomas from our Golden Circle superior tour. He is great, knowledgeable and entertaining. Our 2 day tour included a stayed at Hof. This was the best time we got in our Iceland trip to see the northern lights...

BOOK WITH 10% DEPOSIT
Worried that your travel plans might change? Book your tour more than 21 days in advance with a 10% deposit & pay the rest 14 days before departure. Alternatively, you can pay full price and get a 5% early bird discount! 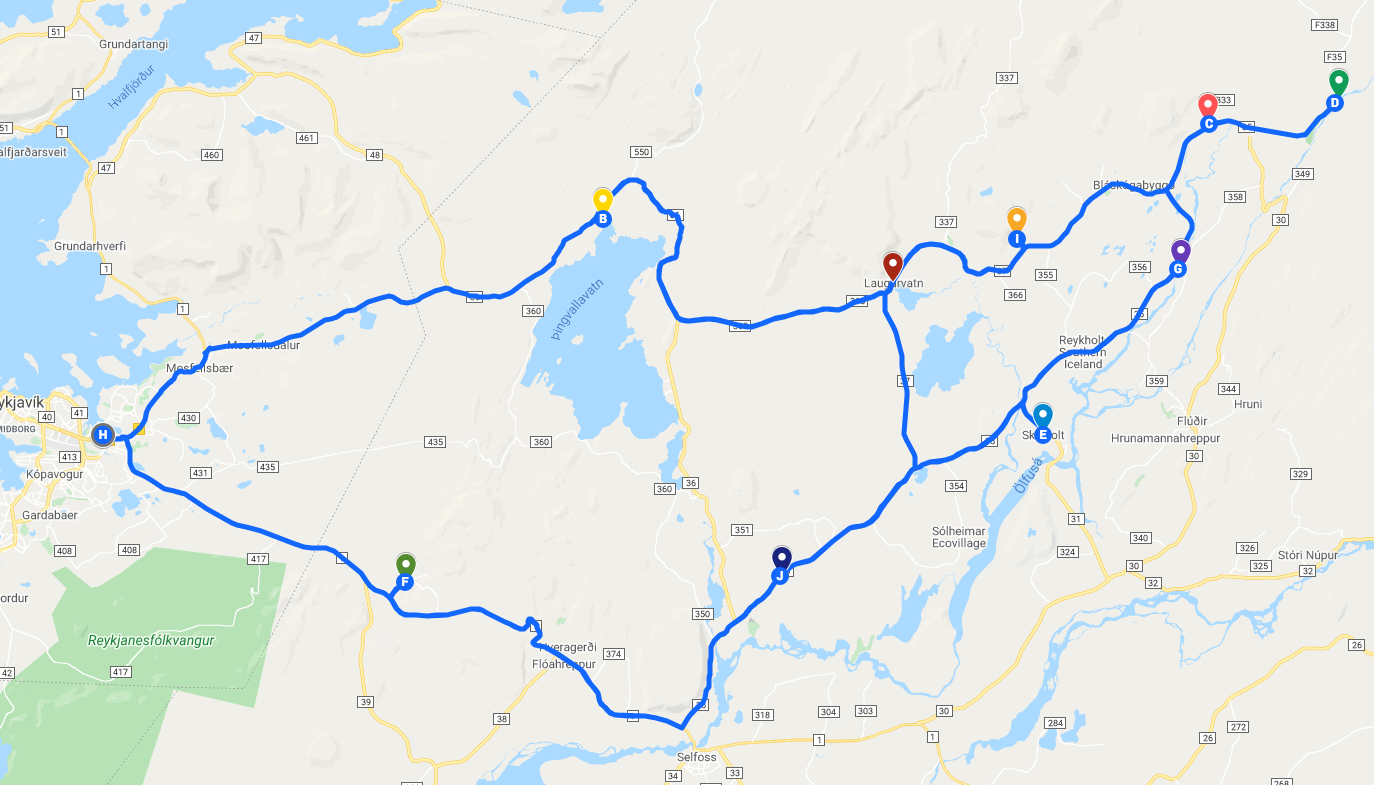 From Reykjavik, you'll drive towards Iceland’s three most famous attractions that make up the Golden Circle: Thingvellir National Park, Geysir Hot Springs, and Gullfoss Waterfall. We make sure that you get enough time to take in the magnificent landscape and the rich history found at every footstep.

Þingvellir (Thingvellir National Park) is strongly rooted in Icelandic history and is famous for numerous reasons. It’s a UNESCO World Heritage Site, it’s where Iceland’s first Althing (Parliament) was founded in the year 930, and it’s where the tectonic plates drift apart. The park is, quite simply, stunning. The waters, pond, and fissures are extraordinarily clear and the history of the place is endless.

This UNESCO World Heritage Site is a place that should not be missed.

Geysir Hot Spring Area is located in Haukadalur Valley. Here you'll find the famous Geysir, after which all other geysers are named. The area is filled with steam and magical geothermal phenomena. At the moment, the most active geyser is Strokkur. It erupts every 4-10 minutes and treats visitors to a show giving you that tingly feeling in your stomach.

Gullfoss or the Golden Falls are next up on the itinerary. It’s one of the most powerful waterfalls in Iceland. The cascade plunges a little over 30 m (98 ft) and has two drops. Gullfoss has been locals' favorite since the Viking times, and now it's your time to explore it.

The extra stops will be at:

Hveragerði, a geothermal town famous for its steaming hot springs and greenhouses. Also known as “the earthquake town,” Hveragerði is an active earthquake location. Grab a cup of coffee and visit an earthquake exhibition in Sunnumörk Shopping Center free of charge.

Faxi Waterfall (often called the little brother of Gullfoss) is one of Iceland's hidden gems where you can enjoy peace and tranquility. The cascade is 80 m (262 ft) wide and 7 m (23 ft) high.

Your Golden Circle small-group sightseeing tour starts with pick up from your selected location in Reykjavik at 8:00 a.m. Please note, that the pick up can take up to 30 min. Available pick-up points: Arctic Adventures’s pick-up list.)

Your Golden Circle small-group sightseeing tour starts with pick up from your selected location in Reykjavik at 8:00 a.m. Please note, that the pick up can take up to 30 min.

Sort By newest
1- of 3 reviews

Reviewed on March 12, 2020 by David Moore From our post-trip system

We really enjoyed this tour. It encompasses all the major tourist sites; geysers, Gullfoss waterfall and the crater at Kerio as well as the magnificent Rift Valley and early parliament site. The vehicle we travelled in was new and comfortable and David our guide very personable, informative and helpful. Highly recommended. Thank you. Later in the evening, we did the second part of the tour to Blue Lagoon. My reservation here was that the documentation about the trip did not mention that this was effectively a separate trip, so we took our swimwear round the Golden Circle.The documentation should be clearer, because it wasn’t until we got on the trip that we discovered that it was basically two trips and there was time to go back to the hotel. Nevertheless, we had a great time at the Blue Lagoon, even though we were there in a snow storm and it was definitely an experience the four of us will always remember with joy!

Reviewed on February 28, 2020 by Yan Liu From our post-trip system

The tour is organized very well by stopping so many places for a day trip! our tour guide is very knowledgeable and funny. He made very clear instruction for our stops and I enjoyed the trip very much! I wish we would stop a little bit longer at Gullfoss Waterfall by cut off other stops 5min shorter.

Reviewed on February 24, 2020 by MICHAEL J EBBERT From our post-trip system

The attention provided in a small group tour is so much better than a larger bus. Our Guide was very informative and allowed for extra time to make sure the visits to each site were sufficient enough time to see the majesty of Iceland. He even encouraged us to go a little further at Pingvellir Park to assure seeing the waterfalls. Excellent tour and thank you very much.