Icelandic Women: Is it all true?

All About Icelandic Women: Is It All True?

Find out all about Icelandic Women: Do you get paid to marry them? What about gender equality? Who are some of the most famous Icelandic women? What is it like dating in Iceland? And so much more.

As an Icelandic woman myself, I can say that I have pretty much heard it all. The main truths, myths or whatever you might like to call it, have to do with Icelandic women’s looks, their sexual behavior or their equality. It isn’t so long ago that an airline I will not mention here advertised “Dirty Weekends in Iceland with a guaranteed one night stand” followed by flocks of bachelor groups and other interested travelers from all over the world.

Some would say of course, and you can’t really blame them. I mean, Iceland has had four winners of the Miss World Competition and a world-renowned reputation of supermodel looking beauty queens. Still, Icelandic women have gotten pretty sick of this passionate attention. Drunk tourists claiming their rights to a one night stand with them and being utterly surprised when being turned down seems to be going on every weekend, every night even and it has got to stop. Here is the real story of Icelandic women:

Iceland is one of the ultimate best countries in the world to be a woman. We are free to make all and any decisions having to do with our lives and will do so without much consideration.

If we want to have a one night stand with you we will in most cases simply do so, and receive no shame for it. But, if we don’t wish to do so we will also shut down your operation without feeling bad about it. It is, after all, a game for two, it takes two to tango and all of that!

Iceland is a small country, known for its feminist movements and strong justice seekers who are not afraid to beat the drums and march for their rights. When a movement is born, a new example being “Free the Nipple” the wave hits Iceland quickly and efficiently. This can be positive in the way that it reaches a lot of attention fast but also negative in the way that things tend to be over abruptly, lost and forgotten. To help with the remembering I will list a few memorable dates in the Icelandic Female History, the Icelandic Herstory.

The Icelandic naming system is quite fascinating. The majority of names today can be found in other countries, especially those who came with the Vikings or come from the bible but then there are others who were simply made after the arrival to Iceland. Some of those names are even popular like Ragnheiður and Þorgerður.

The most common first names in Iceland are:

The most common middle names for Icelandic women are:

Dating a woman from Iceland is often very laid back. You might have found each other at a bar, on Tinder, Instagram or sent her a message on any social media platform out there and started chatting. Don’t start by sending her a love poem or by being too aggressive. Icelandic women are much more into getting to know someone on a more friendly basis and then deciding if it’s worth meeting up. Chill dates like grabbing a coffee, going for some jazz, sitting down with a beer and deck of cards or having ice cream work perfectly.

The need to be independent is somehow deeply encrypted into the Icelandic women’s psyche and persona. Maybe it is formed the Viking Age or maybe it is from the time that their men were all out at sea and they needed to take control, but no matter the reason it is still, today, very present. So my advice to you, a person who is looking to date an Icelandic woman; “Be equal, be friendly, make them laugh and don’t try to push anything”.

More about Dating in Iceland.

Quite frankly, I am not really sure where to stubborn tale originated but it is in all senses not true. There is no shortage of men in Iceland and there is no need to pay anyone to marry. Our social affairs are well in order and no need for the government to step in. So, for once and for all: The Icelandic government is not under any circumstances paying men to marry women!

Famous Icelandic Women | Women you should know about

Iceland has time and again been chosen as the leading country for women in this world. It is very safe, has a low crime rate, offers equal pay for men and women, offers long maternity leaves for both parents and has had women in almost every leading role.

Still, it is not perfect and there are victories to be won, and wrongs that need to be made right.

The Icelandic nation has always been very open to women having authority and responsibility. In the Icelandic sagas, you can even see female warriors and sailors, the most famous being Auður Djúpauðga who sailed the open seas with her husband and slaves and settled in Iceland. She was the leader, the commander in chief and there is no doubt about it when reading her tales.

Icelandic women are known for their fighter spirit, as is the whole nations who fought to survive on this isolated island in the north, and this spirit is not easily broken. As you can see on the timeline above the have been many victories and even more not listed of course.

But as happens in most fights at some point there is a backlash and unfortunately, that has been true to the Icelandic equality movement. In the year 2018, the wage gap was measured at 11% which was a big hit for the Icelandic nation and for the pride the Icelanders have had in their equal status. Fortunately, this was not something Icelanders would let slide and have now pledged to get rid of the gender gap for once and for all before 2022. Let’s hope it works!

Is there anything else you would like to know about Icelandic Women? 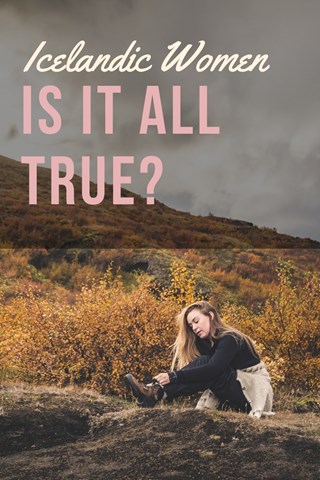 Glacier Hike & Ice Climbing - A must to do in Iceland

The dating life in Iceland has long been a heated discussion, but what is really true about the things people say about it? Where do people meet in Iceland and what are the dating rules in the country of ice and fire?

To travel solo can lead to great discoveries and even though you might not even be trying many find missing a piece of themselves on the way.