Did you know that the Icelandic sheepdog is known for its fluffy coat, curled tail, pointy ears, cheerful character, loud bark and friendly matter? Well, now you do. Let's find out more!

The Icelandic sheepdog is one of the totem animals of Iceland. Its cheerful character, loud bark, and thick coat make it the ideal companion for any Icelandic farmer. Especially if the farmer wants to herd their sheep, horses or cattle in large open fields in any weather!

This famous spitz-type dog breed was brought to Iceland by the first Viking settlers. The breed has been in the country for over 1,100 years. That makes the Icelandic Sheepdog Iceland’s only native dog!

The Icelandic Sheepdog is an energetic medium-sized dog with a double, thick coat and pointy ears. Its tail is very bushy and tends to curl up, creating the most adorable fluffy overlook. Their usual life span is 11-14 years and kept right, they should weigh about 11-14 kilograms (25-30 pounds).

Up to this day, they are commonly used to herd sheep and other farm animals in Iceland’s rural areas, but you’ll also often meet them in the city.

The History and Origin of the Icelandic Sheepdog

The Sheepdog likely descended from dogs brought over from Denmark and Sweden. Archaeologists have found genetic similarities between the sheepdog and canine remains found in graves in Denmark and Sweden dating back to 8,000 BCE!

In the mid-16th century, Swedish scholar Olaus Magnus wrote about the dogs’ popularity and their exporting to England. They became loved by the upper class, priests, and madams. So popular, that Shakespeare mentions these four-legged companions in his play “Henry V.”

Icelandic Sheepdog and horse having fun

In 1650, Sir Thomas Brown also wrote about Icelandic Sheepdogs being shipped to England, specifically to shepherds. Farmers were eager to get their hands on the dogs, thanks to their excellent herding skills. He writes that the dogs resembled foxes. The dog also appeared in the writings of Count de Buffon, a French naturalist.

In the late 19th century, disease killed off over 75% of the Sheepdogs in Iceland. Due to such big losses, in 1901, the importation of dogs was banned in order to give the sheepdog time to recover. At this point, the purebred Icelandic Sheepdog was near extinction.

Thankfully, the breed has recovered in abundance! They are now recognized and protected by the Icelandic Dog Breeder Association (Hundaræktunarfélag Íslands or HRFÍ), and are a member of the famous American Kennel Club (AKC).

The popularity of the breed has never been greater and some of the puppies have been getting new owners in North America and Europe.

Every year, around 100 Icelandic Sheepdog puppies are born. The popularity of the breed has never been greater and some of the puppies have been getting new owners in North-America and Europe.

For those interested in breeding Icelandic Sheepdog puppies, it’s a good idea to get in touch with special institutions for support. The Breeding Review and Compliance Committee is a good source for information for Icelandic Sheepdog breeders in America.

Fun Facts about the Icelandic Sheepdog

In their temperament, the sheepdogs are playful and affectionate. They get along with other pets and are friendly to strangers. Just like most herding breeds, these pooches are free-thinkers and able to work on their own; they’re also obedient and easygoing.

As can easily be read from the breed’s name it is first and foremost a working dog and a watchdog. During herding, dogs work to move animals from one point to another and also keep them in a flock. Icelandic Sheepdogs use their bark to keep animals in a flock. You’ll hear their voice quite often, as these dogs bark when they want something or feel like they need to be in control.

Unlike most working dogs, the Sheepdog can easily relax once indoors and will happily lie at the master’s feet or jump up to cuddle with them. They are very family-friendly dogs as well as loyal and follow their owners everywhere.

They aren’t keen swimmers, most likely because of their thick coat. They are however excellent at learning things on their own which can be troublesome when they learn to open doors, shelves or get things they shouldn’t so owners might want to be on the lookout for new tricks and expect them to be smart. They need daily exercise and are great jogging companions.

The Colors of the Icelandic Sheepdog

The Sheepdog is renowned for its thick coat that typically comes in two lengths. Both longhaired and shorthaired dogs have double coats — the undercoat is thick and soft, and the outer coat is coarse. The dogs shed quite a lot and require weekly brushing to maintain healthy-looking fur.

The colors range quite a lot but are usually a dual split, with white markings. On rare occasions, the dogs can also present themselves in a black mask. Some of the most common color combinations are:

Anything else you would like to know about the Icelandic Sheepdog? 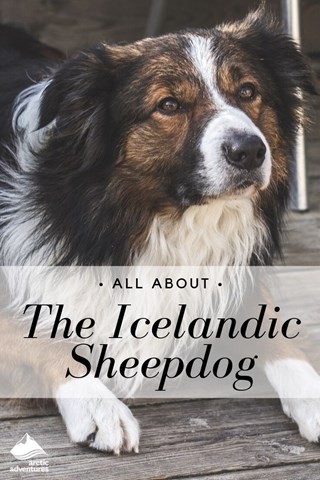 Seals in Iceland - All about the Icelandic Seals

Iceland, the island on the edge of the Arctic is also a fabulous place to spot seals. There are quite a few areas which are known for their seal colonies, making your chances of spotting a seal or a group of them, known as a pod or herd, mu...