All about Icelandic Beer

Menu
More
Kay
|January 26, 2018
Loves writing, food, runes, Reykjavík life, traveling in Iceland and being out in nature. Born in England but fell in love with Iceland in 2010 and moved here, been here since.

Icelanders make great beer, that's a fact! We can't make wine so we focused on beer and since the beer was banned until 1989 we brew it with passion and privilege. Are you looking to know about the most popular beer in Iceland? Where to buy the best beer in Iceland? What is so special about Icelandic beer culture? We got you, read more in the blog!

Many visitors to Iceland are surprised to discover a plethora of Icelandic breweries and artisan micro-breweries, seemingly, an impossible number for such a small population. There is even an Annual Icelandic Beer Festival.

My personal favorite? Einstök Hvítt, an award-winning craft white ale, brewed in Akureyri by Ölgerðin Egils Skallagrímsson. I no longer have to miss out when I travel overseas, some discerning bars in the UK and other countries are selling this refreshing beer with a subtle orange tang. I even found it in Sennan, one of the remotest villages in South West England!

Photo by Frank Luca on Unsplash

Icelandic beers have won some impressive prizes at the prestigious World Beer Awards:

The first blonde beer Kaldi brewery made. Sold mainly in bottles or on tab (very hard to find), the original Kaldi is a blonde lager beer but brewed in the famous Pilsner tradition, so it is classified as such. The beer is a blonde copper golden color with a soft filling of roasted malt, slightly bitter but very gentle.

Pure Icelandic water, malted barley, malted rye, malted wheat, hops, oats and yeast.
This beer has a very distinct fruitiness to it, infused with Sorachi Ace, Centennial and Simcoe hops, the result is a tropical delight of mango with a hint of pineapple.

Wheat malt, pilsner malt, oats and Bavarian noble hops spiced with coriander and orange peel. Best served with a slice of orange, it really brings out the orange flavor of the drink. The perfect summer drink!

Brewed with a combination of Cascade, perhaps the most quintessentially American hop, and Northern Brewer and Hallertau, which add a more English and Central European vibe. Kind of a mix of an American-style pale ale, English-style pale ale and a European-style pale ale or lager. In the flavor department, pale and light caramel malts form the essence, while hops contribute to a profile which is well-balanced among those floral & citrus Cascade notes and earthy, woody, and herbal tones.

Has a light malty flavor but the main feature of this beer is a crisp, bitter hop flavor with a little citrus fruit, like an orange peel. It has won numerous awards and it was the very first beer Borg Brewery made!

Chocolate, licorice and coffee taste, a rich dark beer with an aroma to match. The fresh Icelandic water plays an important role in giving this damsel its smoothness, and the double fermentation infuses it with a taste that is at once pungent and mild. An unusually light dark beer!

A classic lager beer, brewed in the Old-school tradition of craftsmanship. Proven brewing methods make it a refreshing premium beer with a refined finish

A super-light delicious beer recommended in the summer. Made from 2-row organic spring barley. The Pilsners flavor is usually described as slightly nutty and biscuity.

Úlfur meaning Wolf, is dry hopped with American hops that give a bitter yet fruity aroma. The beer has a citrus fruit (particularly grapefruit) kind of taste and a delightful crispness. This is the winner for many Icelanders!

Every year Borg Brewery makes a new queer beer for the Reykjavík Pride Festival so we can’t put out any alcohol level or even define it by type! Every year it’s new and every year we try to love! We recommend you do the same!

An annual Icelandic Beer Festival features the best local brews, although, nowadays, overseas breweries participate as well. The 2018 Annual Icelandic Beer Festival is to take place from 22nd to 24th February and tickets are in very hot demand! The celebration relates to the greatest date in the Icelandic beer calendar, 1st March 1989, when full strength beer could, once again, be legally brewed and sold in Iceland. Read below for more info!

I can almost hear you asking: “Do modern-day Icelanders drink like their Viking ancestors?” Of course, a few do, and a great many enjoy a few bevies at the weekend, but by no means all!

So, the next question I can feel radiating across the airwaves is “who drinks all that beer?” It has to be said, Iceland is a small nation which places a very high value anything innovative – tiny artisan breweries just keep springing up. There are just so many beers to choose from! Quite a few of them enjoy well-established markets overseas too!

Photo by Yutacar on Unsplash

Untappd creates a ranking for the Icelandic breweries who produce more than 5 beers, in international terms these breweries are tiny, yet, when it comes to variety many are surprisingly prolific. In the order of their current ranking the top few contenders are:

With so much choice, beer tasting is a very popular addition to some activity tours, for example, Beer Tasting and River Rafting, taste 4 of the best craft beers from Borg Brugghús after your rafting trip. Happy rafting and Skál (cheers)!

Have you tried an Icelandic beer? 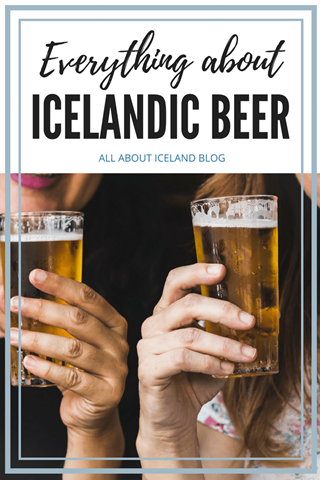 Here Inga covers the best of the happy hour scene in Reykjavík. Where to drink, what to expect and when it's the most budget-friendly for you to drink in Reykjavík.

Christmas, the time to eat and drink until you just can’t anymore. This is the time to be merry and what better way to celebrate than to say “SKÁL” with friends and family with some great Icelandic Christmas Beers.