Menu
More
Sofie
|October 4, 2019
Sofie is a free-spirited journalist from Kentucky who lives a nomadic lifestyle, and spends much of her free time in airports on layovers. Hobbies include dancing and sipping bourbon.

Flatey, an island off the West Coast of Iceland, just took the top spot on the Big 7 Travel ‘Best Islands in the World 2020’ list

Big 7 Travel used the results to compile a dream list of travel spots. Out of 50 total locations, the two-kilometer stretch of land in Iceland was ranked number one because of its unique charm that “feels like a movie set.”

The name “Flatey” translates to “flat,” as there are no hills on the island. A small stretch of land, Flatey sits in an archipelago of islands in Breiðafjörður Bay, a large shallow bay off the West Coast of Iceland.

This region is one of the hidden gems of the country, known for its idyllic, remote, nature spots not overrun with tourists.

Surrounded by a smaller cluster of Islands, Flatey is the only one with people and boasts 6 residents

Little houses on Flatey island in Iceland at midnight

Once part of a popular trade route, the island used to be home to a large community of fishing families. However, due to harsh living conditions and few opportunities, the community dwindled.

Now the total population of Flatey is six, with only two families living there year-round. Cars are prohibited on the island, excluding hotel cars and tractors. Only one road winds from the ferry dock to the old village.

But in the warmer months, tourists flock to the island by ferry

In the summertime, Flatey’s quiet community booms with tourists. A ferry travels to Flatey twice a day from Stykkishólmur and Brjánslækur to bring day and overnight visitors.

While some people have summer homes on Flatey, most people stay for one night on their way to the Westfjords. Travelers who want to stay overnight can find lodging at the island’s only hotel, Hotel Flatey.

Former hotel employee and Arctic Adventures receptionist Katarzyna Wojtysiak says that “Even though it’s a tiny island, during the summer the hotel arranges some concerts or pub quizzes, so there is a bit of entertainment too. There is also a camping ground and some small gift shops at the harbor.”

Flatey has become a popular birdwatching tour spot because of puffin migration. Puffin migration season spans from May to late August.

The black-and-white birds have become such important residents that the highest point on the island has been dubbed Lundahryggur, or “Puffinsridge.” During hatching time, part of the island is closed off to tourists to protect the puffin couples and their offspring.

Dotted with quaint, colorful houses built hundreds of years ago, the island is like a time portal

These days nobody lives in the historic village’s candy-colored homes besides summer visitors. Most of these homes were built at the turn of the last century and the oldest house was built in 1840. Landmark buildings around Flatey give tourists a window into Icelandic history.

A huge draw for book and history lovers, Flatey is home to the oldest and smallest library in Iceland, built in 1864. The intimate timber building is only 4.75 meters long and 3.43 meters wide and holds about 100 books. At one point its collection included the Flatey Book, the largest medieval Icelandic manuscript.

Just next door to the library is another historic building, the Flatey Church. Reconstructed in 1960, the ceiling displays an impressive mural of the history of Flatey by artists Baltasar and Kristjana Samper.

Visitors will be happy to learn that one of the few buildings is a bar, Saltkjallarinn, where you can order a ‘Flajito’

Strawberry cocktail with crushed ice on a red gradient.

This island may be remote, but it certainly isn’t dry. Saltkjallarinn is Flatey’s local bar, where you can buy their signature drink, a “Flajito.”

A while back, when mojitos were a craze on the mainland, someone visiting Flatey ordered the minty drink. Unfortunately, the island doesn’t grow mint. So as to not disappoint the customer, the barmaid went to her garden and picked rhubarb and lovage to replace the lime and mint. The Flajito was born.

Picturesque spots abound on the island. You can walk around the entirety of Flatey in 1.5 to 2 hours, including short stops and beautiful views of the West fjords and islands around.

Grýluvogur Beach is a visitor favorite. Two shipwrecked boats sit on the shoreline. The more well-known ship, “Gísli Magnússon SH 101,” was built in Reykjavík in 1947. After it shipwrecked in Stykkishólmur, it was sent to Flatey Island. Not as much as known about the other ship, but its wooden skeleton is still a point of interest.

The scenic locations have been featured on the big screen

“Many movies are set on the island, most notably ‘The Honour of the House’ based on a short story by Nobel Prize winner Halldór Laxness,” wrote Big 7.

Flatey is the perfect getaway spot for travelers who want to unplug, relax and get away from the hustle and bustle

This remote island might not have the traditional features of tourist hot spots, but that’s what makes Flatey all the more attractive. On this arctic oasis away from the mainland, visitors can enjoy a simpler way of life among nature. 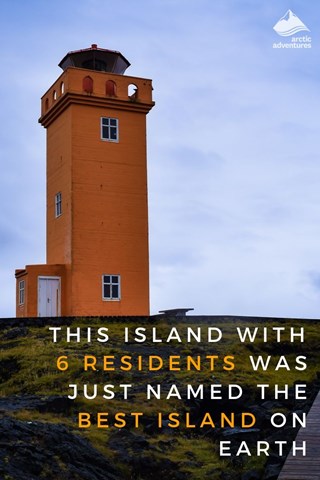 Iceland Named One Of The Safest Countries To Visit In 2020

Iceland tops travel lists for its other-worldy beaches and idyllic islands, but its newest travel ranking has nothing to do with beauty.

If you’ve ever wondered where you would hide during a zombie apocalypse, look no further.