In English, the name Gullfoss translates to ‘The Golden Waterfall’. If you see the golden-hued spray which surrounds beautiful these falls on a sunny day, you will be left with no doubt as to where this amazing sight on the Hvítá River got its name! Gullfoss is one of the most famous and iconic waterfalls in Iceland, regularly featuring on lists of the best waterfalls in the world to visit.

The glacial Hvítá River (also known as ‘the White River’) originates at Langjökull, the second largest glacier in all of Iceland.The average flow rate is an awesome 140 m³/s (4944 ft³/s), although, during the summer months, greater meltwater increases the thundering flow markedly. The roaring Hvítá River drops 105 feet in two stages of 35 feet and 70 feet, disappearing into the rugged deep glacial canyon. The descent of the tumbling torrent into the canyon certainly makes these falls appear considerably higher than they are. There is a certain rawness, power, and vastness to this waterfall which leaves most people who visit feeling quite humble in the face of the raw power of nature. The 1.5-mile-long canyon at Gullfoss was formed by a series of enormous glacial floods around the end of the last ice age. 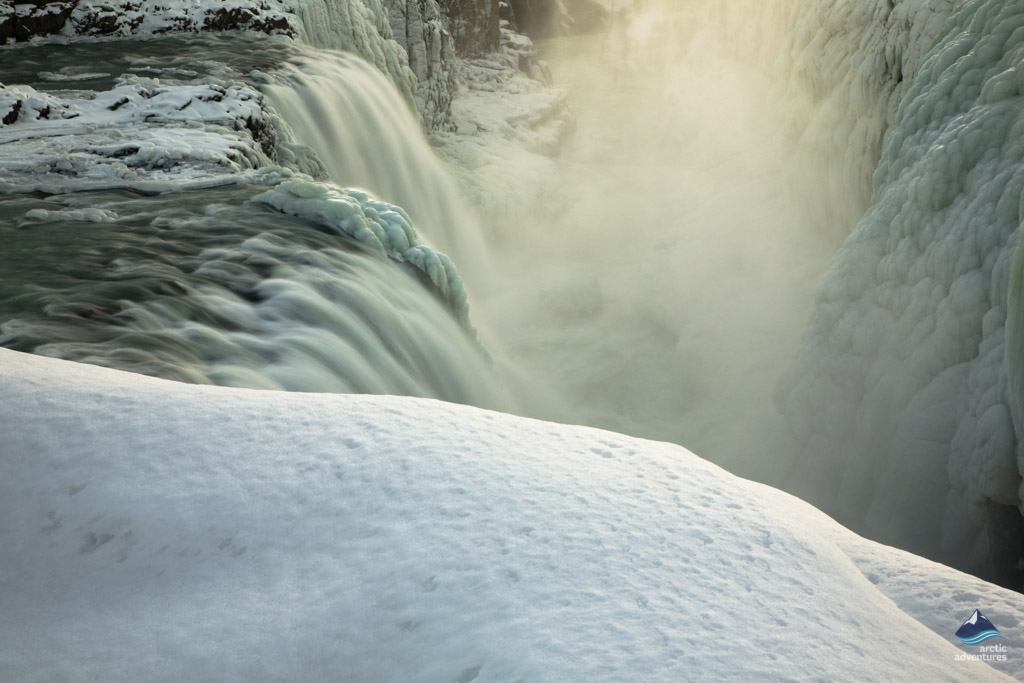 This iconic Icelandic waterfall has probably brought about more conflicting views within the Icelandic population than any other landmark. A great many, such as local farmer´s daughter Sígríður Tómasdóttir, fought avidly for the preservation of this great landmark, but a few business-minded entrepreneurs, including the poet and lawyer Einar Benediktsson, were determined to exploit the rich hydroelectric potential of the powerful Hvítá River. After the much-heated debate, the preservationists won and, fortunately for Iceland’s many visitors, we can still enjoy Gullfoss Waterfall in all of its glory today. The waterfall has been part of a designated preservation area since the 1970s and a monument commemorating the efforts and persistence of Sigríður Tómasdóttir now stands at the top of Gullfoss Falls.

Things to see and do at Gullfoss Waterfall

First and foremost, visitors to the area should figure out the best way to see the waterfall itself. A number of pathways will take you to various different vantage points. Remember though, both for your own safety and to protect the fragile ecology of the region, be sure to stay on the designated paths. You can enjoy the falls from the very top or walk the lower path for an even closer view. The upper viewing point offers some absolutely great photo opportunities, but then again, so do most places along the pathways!

For those looking to add a bit of extra adventure to their trip to this iconic Icelandic landmark, Gullfoss Waterfall car park is the pickup point for an exciting snowmobile tour on Langjökull Glacier and snowmobiling and ice cave tour combination in winter. River rafting tours are carried out from the Drumbó Rafting Base higher up on the Hvítá River. This is an exciting option for those who want to see all of the wider Gullfoss area and enjoy some water action on the White River.

Food and Refreshments near Gullfoss Waterfall

Gullfoss Café is located next to the main car park. A choice of soups, salads, sandwiches, paninis, cakes, desserts and hot and cold drinks are available. A selection of Icelandic meat soup, salmon, and other traditional Icelandic meals also feature on a regular basis.

Whether you want to buy very practical outdoor clothing, elegant jewelry, designer Icelandic wool knitwear or top quality fur goods, you will find something to suit you in the local shop. Here you will find everything from books on the local area to Blue Lagoon cosmetics, local teas, interesting souvenirs, Cintamanni outdoor clothing and handknitted Icelandic lopapeysa sweaters.

There are two car parks located near Gullfoss Waterfall, both of which are free to use. The upper car park is closer to the café, shop and waterfall, but neither are particularly far away. The higher car park is the second car park you come to when you drive into the region, and can be found at the following GPS coordinates:

There are toilet facilities to be found near the shop – a small fee is payable, while the toilets at Gullfoss Café are available free of charge to Paying customers.

Hotel Gullfoss is located at Brattholt, 801 Tungufell, and is the closest major hotel to Gullfoss Waterfall – less than 2 miles away.

The shortest distance from Reykjavík to Gullfoss is 109 km (68 miles). To get there, you need to head north on your way out of the city, turning right onto the road through the Mosfellsdalur Valley (signposted as Þingvellir). You then head through the picturesque village of Laugarvatn, following Road 35 to Gullfoss.

Gullfoss is one of the main highlights of the epic Golden Circle Route which consists of three main attractions:  the Thingvellir National Park, the Gullfoss waterfall, and the Geyser Geothermal Area.

If you take the Ring Road out of Reykjavík towards and head south, the journey takes a little bit longer at 118 km (73 miles). Gullfoss is located 9.6 km (6 miles) from the Geysir Geothermal Area, while the route from Þingvellir National Park is 70 km (43.5 miles).

Tours that include visits to Gullfoss Waterfall