Explore the pearls of the Highlands: Thorsmork & Landmannalaugar

Join us on this fantastic two-day tour that is the absolute best way to explore two jewels of Iceland’s remote Highlands: Landmannal<b>BOOK WITH 10% DEPOSIT</b><br> Worried that your travel plans might change? Book your tour more than 21 days in advance with a 10% deposit & pay the rest 14 days before departure. Alternatively, you can pay full price and get a 5% early bird discount! Choose the deposit or full payment option in the third step of your checkout.augar and Thorsmork.

As the start and endpoints, respectively, of the world-famous Laugavegur Trek, these two regions are the ultimate hiker’s paradise.

Instead of trekking from one end to the other - which would take at least four days and require overnights in tents or mountain huts - we’ll embark go on a spectacular one-day hike at each end.

This will allow us to stay overnight in a lovely, comfortable country hotel. Join this extraordinary tour and experience the very best hiking spots Iceland has to offer without having to rough it!

The tour is temporarily not available for booking 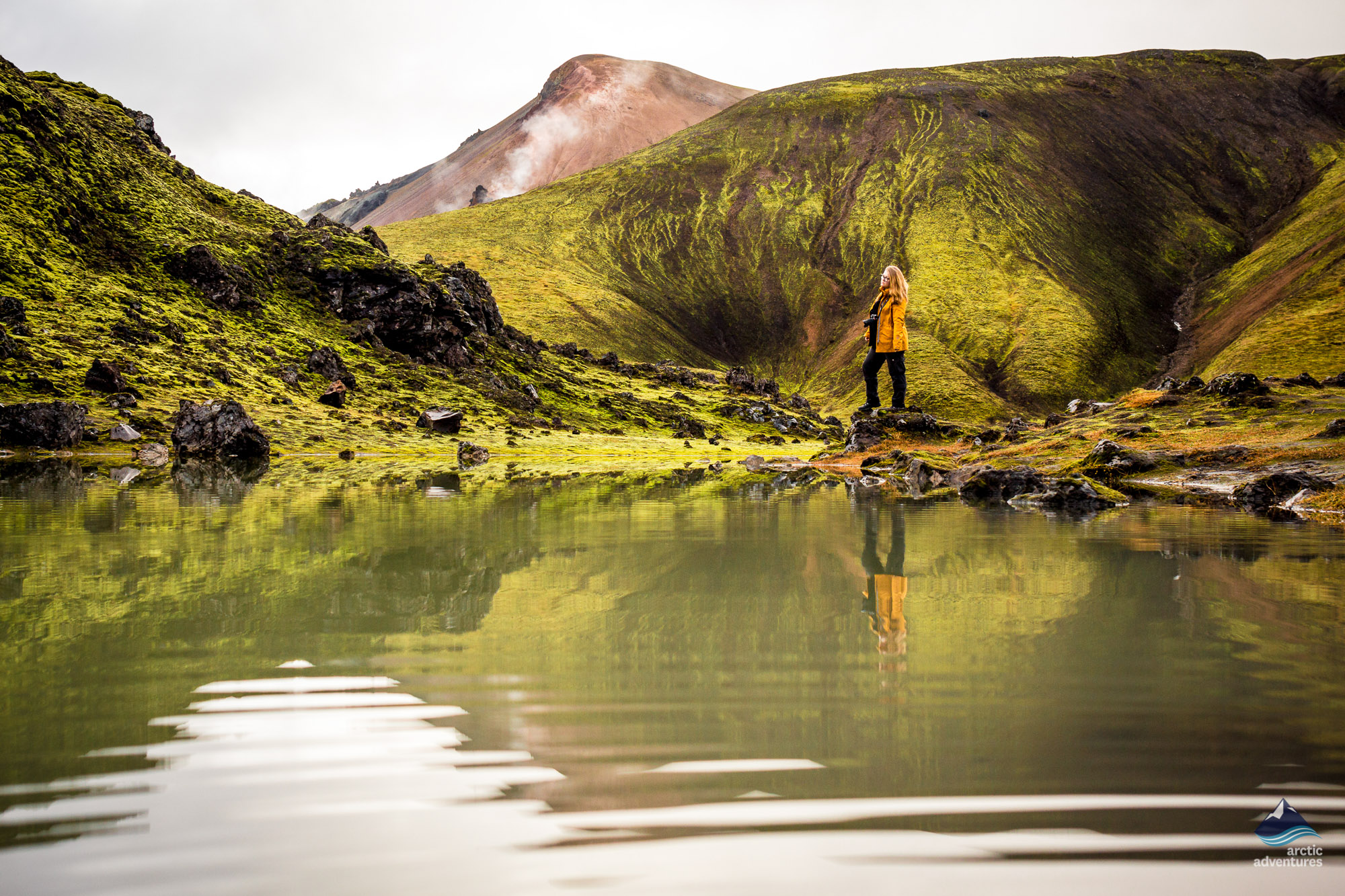 Both Landmannalaugar and Thorsmork are located in the southern part of the Icelandic Highlands, some 55 km (34 mi) apart. Though both are popular among hikers and adventurers, they look nothing alike.

Thorsmork: Thorsmork, on the other hand, is a whole different world. This vibrant green valley lies nestled in between three glaciers, surrounded by sharp, moss-covered mountain ridges. While Landmannalaugar has hardly any vegetation, Thorsmork is rich in rare Arctic flowers, birch forests, and various mosses, which together provide an ideal habitat for many bird species and adorable Arctic foxes.

Landmannalaugar: Landmannalaugar is a colorful geothermal area, a smoky valley surrounded by rounded rhyolite mountains. In the middle of the valley, an obsidian lava field stretches out over several kilometers. The nearby mountains are painted in a kaleidoscope of colors: red, blue, yellow, green, purple, white, and black patches that cast the landscape in a surrealistic lens. To top off the otherworldly quality, steam rises from the ground here and there. There’s even one natural hot spring where you can take a dip.

Trek into Iceland’s Highlands: This 2-day tour is made up of two separate one-day hikes. On the first day, we’ll pick you up in Reykjavík and drive over the Highlands to Thorsmork, crossing several streams and rivers along the way. After leaving our Superjeep behind in the valley, we will hike up to the Fimmvörðuháls mountain pass between two glaciers. We’ll reach the volcanic craters that were formed during the Eyjafjallajökull eruption of 2010. After summiting the peak, we’ll descend back on the same route. In the evening, we’ll leave the Highlands to spend the night in a small country hotel in South Iceland.

The next day, we’ll take a different Highland road and drive to Landmannalaugar. Once there, we will have the chance to hike one of the numerous loop trails and bathe in the hot spring. After the long and adventurous day in the wilderness, we’ll drive back to Reykjavík and drop you off near your accommodation.

Please note: Please note that the order of the tours can be changed due to availability.

Pickup will begin at 8 a.m. in Reykjavík. Your bus will pick you up at your previously selected location before heading south. After a scenic drive along the South Coast, we will leave civilization behind and turn inland towards the Thórsmörk Valley ...)

Pickup will begin at 8 a.m. in Reykjavík. Your bus will pick you up at your previously selected location before heading south. After a scenic drive along the South Coast, we will leave civilization behind and turn inland towards the Thórsmörk Valley in the Highlands.

The drive through the Highlands will be quite adventurous, as we’ll have to drive on gravel roads and cross several streams and rivers along the way. The landscape will be entirely different from what we saw the day before. We’ll pass by glacier tongues and jagged mountain ridges. After all these bizarre formations, you’ll come to understand why trolls have played a huge role in Icelandic folklore.

We’ll stop in the very heart of Thórsmörk, where we’ll leave the Super Jeep behind as our feet take over. We’ll start our ascent slowly, and once the trail turns steep, be sure to look around. The landscape will blow your mind! We’ll continue the climb until we reach a wide plateau for a spectacular view of the Highlands and the surrounding mountains.

From here, the trail starts to ascend steeply again to reach the Fimmvörðuháls Mountain Pass. We’ll stop by the two volcanic craters, Magni and Modi, formed in the infamous Eyjafjallajökull eruption of 2010. The fresh lava rock, the large craters, and the glaciers in a backdrop of the mountains’ vibrant colors all make this hike truly outstanding. In good weather, we’ll be able to see the Landmannalaugar Mountains.

This is a demanding, but certainly rewarding, hike. The elevation gained is approximately 800 meters (2,624 feet) with a total length of 16 km (9.9 mi ). Many Icelanders and visitors alike agree that Thórsmörk offers some of the most enchanting landscapes in all of Iceland.

After summiting the peak, we’ll descend back on the same route, now facing the valley and its breathtaking views.

The Thórsmörk–Fimmvorduhals Hike shouldn’t be missed by any outdoor enthusiasts visiting Iceland!

After the hike, we'll return to our super jeep and drive back to the South Coast. We’ll take a quick detour to the majestic Seljalandsfoss waterfall, that famous cascade that you can walk behind.

We’ll spend the night in a charming hotel in Hella.

The next day, after a delicious breakfast, we’ll jump in our bus and take another Highland route to Landmannalaugar. You will be picked up at Hella Bus stop by a specially designated Highland bus around 09:00 am.  From here, the journey will get a li...)

The next day, after a delicious breakfast, we’ll jump in our bus and take another Highland route to Landmannalaugar. You will be picked up at Hella Bus stop by a specially designated Highland bus around 09:00 am.

From here, the journey will get a little bit bumpier and the landscape will become more surreal as we go. We’ll drive through black rocky deserts, moon-like landscapes and pass by the active volcano Hekla until we finally arrive at our destination, the Landmannalaugar basecamp. This camp is situated in a colorful, geothermal valley between the mountains.

Here we can catch a quick rest, toilet break and a bite at the campsite.

The hiking trails start right at the huts. The most scenic hike takes us across the valley, through the Laugahraun lava field where we can observe the obsidian fields. We’ll be surrounded by all the colorful mountains for which Landmannalaugar is so famous.

We will walk the first few kilometers of the world-famous Laugavegur Trail all the way up to Mount Brennisteinsalda where the trails split. We’ll continue our loop hike through an incredibly green canyon called Graenagil. If time permits, we’ll climb up to the summit of the spectacular Bláhnjúkur volcano (the Blue Peak). We'll head back to base camp and jump in for a long soak in the Landmannalaugar hot pool.

What if I don’t own all of these clothing necessaries?

Don’t worry, you can always rent sturdy hiking shoes, waterproof jacket and pants in the booking process or add it to your booking. See more.
Please keep in mind that we do not rent gear on location.

What type of weather can I expect? What should I wear?

The weather can be anything from sunny to snowy in almost any season although snow is rare during summer time. We do suggest that you dress accordingly. This means in layers, thermal closest to you and waterproof on top. We’ve prepared a guide to help you get ready for your adventures, check out – How to prepare for hiking and trekking in Iceland.

Can I wear jeans and sneakers?

No, please do not wear jeans and sneakers on this tour, it’s not appropriate clothing for this type of tour. Check the list of what to bring to see what kind of clothing is appropriate.