See classic Iceland attractions while cruising along the Golden Circle. Then step into the world’s largest man-made ice cave at Langjokull Glacier!

Want to do this trip for free? Tag us @arcticadventures on your social media stories and photos during your trip and enter a chance to win a full refund. The winner will be picked once a month!

See fire and ice combine to create extraordinary natural wonders on this Golden Circle and Ice Cave tour! In a single day, visit the birthplace of the world’s oldest parliament, exploding geysers, and roaring waterfalls. After your tour around the Golden Circle, step into the man-made Langjökull ice cave, Iceland’s most ambitious project. With so much natural beauty around you, you’ll forget you’re still on planet Earth.

All the ingredients for an epic adventure are in easy reach on this Icelandic journey!

Suitable for most people in fair condition.

Our Customer Care department is open every day From 7:00 am - 17:00 pm GMT (Monday - Friday). You are always welcome to send us an email using our contact form. Our friendly customer service will assist you every day during business hours.

Your Golden Circle and Ice Cave tour starts with pickup from Reykjavik. Once everyone is on the super jeep, we’ll head north out of Reykjavik to the Golden Circle, home to Iceland’s most famous landmarks.

Your first stop is Thingvellir National Park where the North American and European tectonic plates collide. Most importantly, Iceland’s (and the world’s) first parliament was held here in 930 C.E. Back in 2004, Thingvellir was named a UNESCO World Heritage Site.

Next be wowed by Geysir Geothermal Area, where Iceland’s most active geyser, Strokkur, spews hot water into the air every five minutes. The site is also home to the Great Geysir, formerly the largest waterspout in the world. Today Geysir is not as active, but it has lent its name to all other geysers.

After you’ve had your fill of spurting geysers, it’s wheel up to the thundering Gullfoss Waterfall. Also known as the Golden Falls, Gullfoss is rated one of the 10 best waterfalls on Earth. Splosh! The cascade drops 105 ft (32 m) down into a rugged canyon.

Langjökull & Into the Glacier Adventure

Continue on unspoiled highland roads to Langjokull Glacier, Iceland’s second-largest ice cap. Your destination is Langjokull ice cave, Iceland’s most ambitious project. Unlike other ice caves in the country, the one in Langjokull is man-made and the largest of its kind in the world.

Spend about an hour touring a man-made ice labyrinth of 500-m (1,640-ft) long corridors and separate halls. Get inspired. The tunnel features brilliant blue ice formations, a frozen chapel, and a breathtaking glacial crevasse. You’ll dream about this kingdom of ice for years to come!

Another option would be the Landmannalaugar Safari on this tour you get to explore parts of the Icelandic highlands and bathe in natural hot springs. Most of our jeep tours are also suitable for children over the age of 6 years old. If you would like a nice and relaxing experience we would also recommend the Golden Circle & Secret Lagoon tour.

If you are staying downtown Reykjavik please read this information about pickup. 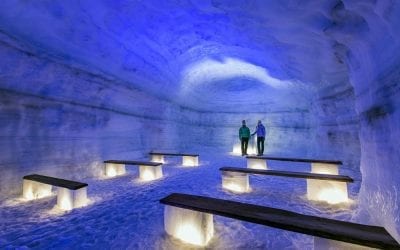 Day tour from Reykjavik to visit the man-made ice tunnel in Langjökull, Iceland's 2nd largest glacier, ride in a super truck and visit some famous attractions. 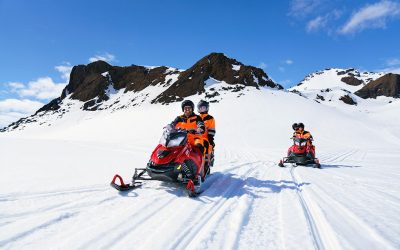 Glacier Snowmobiling from Gullfoss or Reykjavik

Join us for a 1-hour Exhilarating Snowmobile Adventure on Langjökull Glacier! 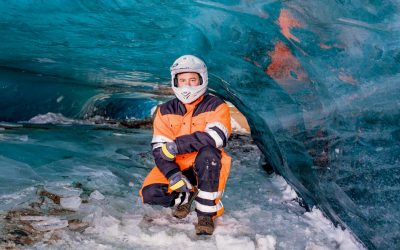