Game of Thrones Tours in Iceland

Embark on our Tours of Game of Thrones' Locations in Iceland

On our Game of Thrones Tours you can discover the filming locations of the famous series in Iceland. Walk in the footsteps of your favorite characters in the magical landscape of the Land of Ice and Fire.

Experience the filming locations of the famous Game of Thrones series in Iceland. We go in the footsteps some of your favorite characters in the magical landscape of Iceland

Game of Thrones Tours and Locations

In many ways, Iceland was destined to become a TV and movie location. Its landscapes are truly humbling – shaped by thousands of years of erosion, moving ice and volcanic lava.

For the makers of Game of Thrones, it has served as a perfect backdrop: The show takes place in a brutal, ancient world, where weather-bitten men and women combat dragons, White walkers and each other. Just like the show, Iceland offers humbling beauty and a trip to another world.

Here are some of the most striking Game of Thrones locations that you can visit in Iceland. Depending on your schedule (and level of commitment!), you can take in a range of GoT landmarks in one day, or traverse the country to take them all in over the space of a few days.

The GoT One-Day Tour

The following locations are all included in the one-day Game of Thrones tour, which takes you beyond the Wall, to the scenes of wildling raids, epic duels and dragon ambushes. And, because many of these scenes were filmed so close together, you’ll have time for lunch!

You might remember this canyon from Season Four, Episode Eight (where Arya Stark and the Hound finished part of their journey) or in the following episode, when Little Finger and Sansa arrived. 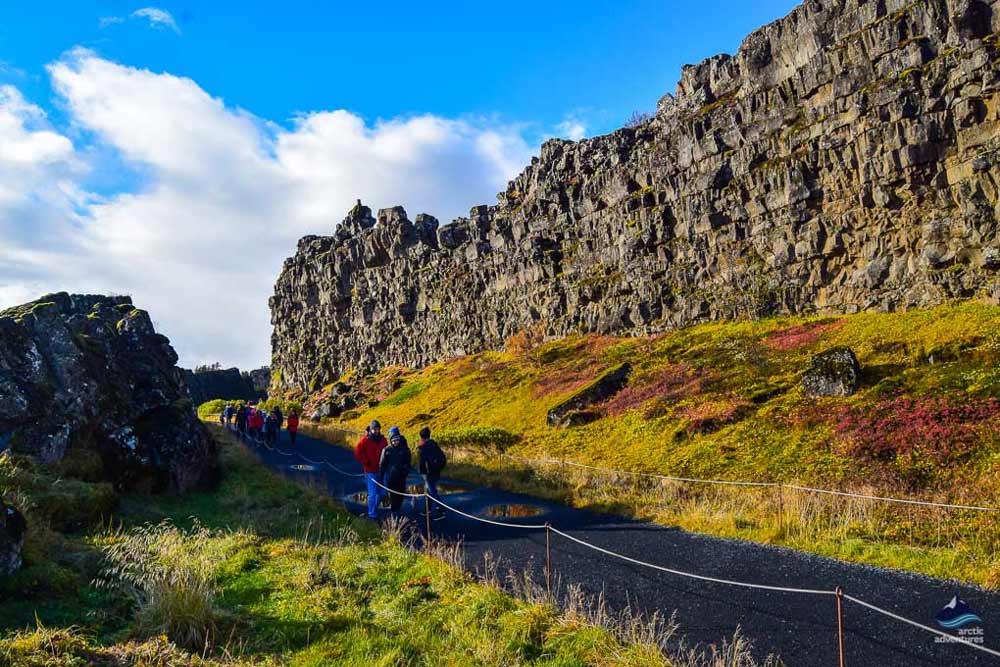 It’s a handsome piece of land; walls of natural, grey and rugged rock flank stand either side, creating a structure that looks like it could have been carved by man or nature: The perfect pathway to a fortress.

The Bloody Gate is in Thingvellir National Park – much more accessible in real life than in Game of Thrones! It’s less than an hour’s drive from Reykjavík and is a stop on our Game of Thrones tour. The National Park covers over 35 square miles, and also includes the Mid Atlantic Ridge and Þingvallavatn, the largest natural lake in Iceland.

This is also the spot where Styr is introduced and Wildlings and Thenns meet in the canyon (Season Four, episode One).

At the end of Season Four, the Hound had a long and brutal duel with Brienne of Tarth. That throwdown was filmed in Hengill. This is a volcanic mountain south of Thingvellir. It’s very scenic, with grassy hills, craggy rocks, streams and springs. The famous GoT fight scene was shot in several locations on this spot.

The site of a thrilling ambush in Season Four, Episode Three, this village dates to Viking times. It was renovated in the 1970s (after volcanic ash damage) and is a popular spot for history buffs and Game of Thrones fans alike.

Even beyond its famous TV connections, Thjorsardalur Valley is a gorgeous place to visit, with buildings coated in green grass in an enchanting location.

Iceland’s landscapes and seasons are so diverse that it’s been used for a range of Game of Thrones episodes, including ones either side of The North Wall.

For instance, you probably know the astonishing scene in Season Four, Episode Six, when a dragon emerges from a canyon to lay waste to unfortunate goats.

The showrunners chose the beautiful Thorufoss, a 62-foot waterfall that leads to a pretty stream in an emerald valley, as the location for this epic scene.

Beyond the One-Day Tour

For those who want even more, we have stop-offs across the whole country where Game of Thrones was filmed, from romantic caves to legendary ambush spots.

Game of Thrones isn’t all backstabbing and fire-breathing: In Season Three, Episode Five, one of the most cherished moments is a tender love scene between Jon Snow and Ygritte in a secluded cave. 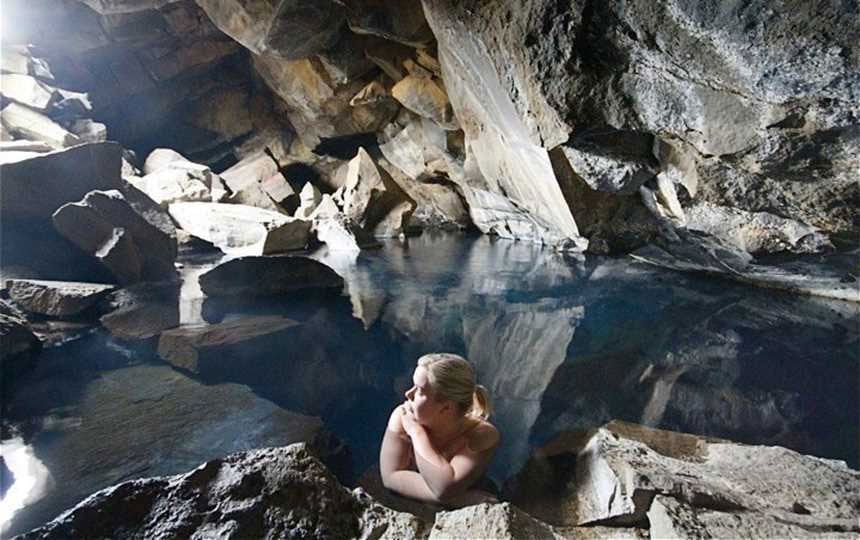 In fact, Grjotagja Cave has been a beloved attraction long before Game of Thrones. And, while the show wasn’t filmed here, the cave provided inspiration for the showrunners: It was meticulously recreated in a studio soundstage.

Grjotagja Cave in North Iceland is a hidden gem – a magical volcanic cave with a clear blue geothermal spring.

A lava field with a series of unusual, natural arches, Dimmuborgir was the shooting location for Mance Ryder’s camp of Wildlings for much of Season Three. This is a sight to behold regardless of what time of year you visit, but there’s a trade-off: Winter trips will be more evocative of the Game of Thrones scenes filmed there, as they’re more likely to be blanketed in ice and snow (as the show’s scenes were). Summer is just as scenic, though, as the orange-hued rock surfaces are revealed. It’s arguably more pleasant, but less like the show. 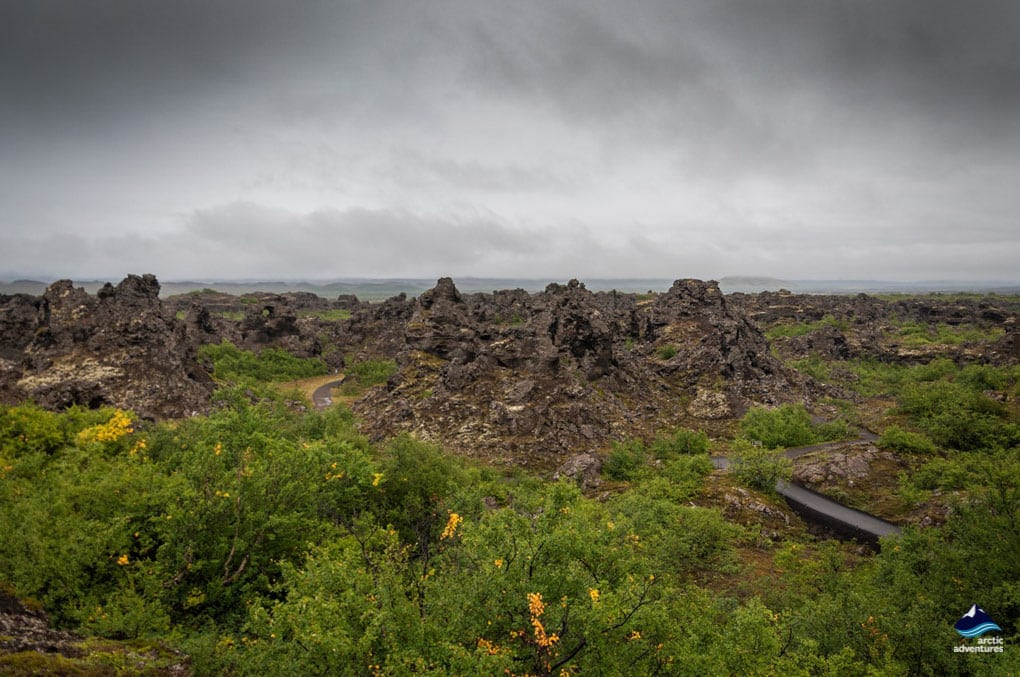 A visit to Dimmuborgir is part of our Northern Three-Day Tour.

A familiar site from Season Seven, Episode Five: This beach is where Jon Snow arrived at Eastwatch to meet the Brotherhood Without Banners. 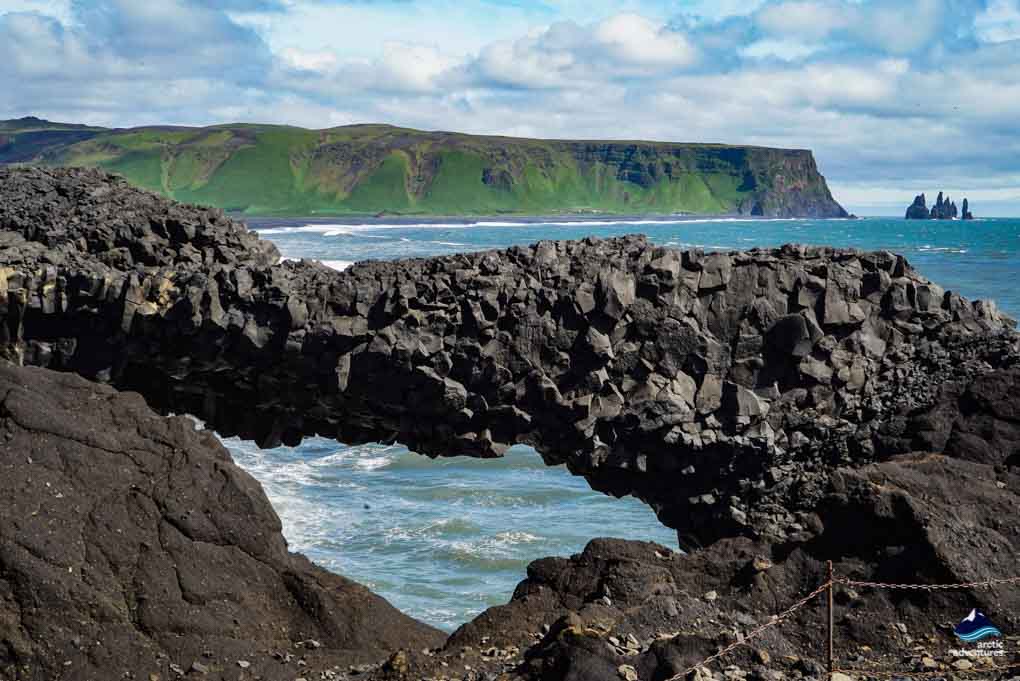 A distinctive beach, with a handsome, dark appearance that distinguishes it from typical seasides, Dyrhólaey also has a double-arched rock formation in the water.

We offer numerous tours that bring you to or near Dyrhólaey.

In Season Seven, a turning point in the saga is the capture of one of the feared wights by Jon Snow and his men.

An impressive, mossy canyon near Þórsmörk, Stakkholtsgja is a satisfying walking spot, as hikers are dwarfed by the vast, dark rock walls on either side. It’s also a great place for birdwatching, once you’re done with the GoT-themed selfies!

You can access Stakkholtsgja several ways, including via our super jeep tours. These tours are a blast, incidentally, regardless of where you stand on Game of Thrones.

There are some locations in Game of Thrones that are so perfect, you’d swear they were CGI. Kirkjufell, for instance, is a mountain that looks exactly like a serrated arrowhead. This mountain makes an appearance in numerous scenes North of the Wall, its intimidating presence a reminder of the danger that faces the people of Westeros. 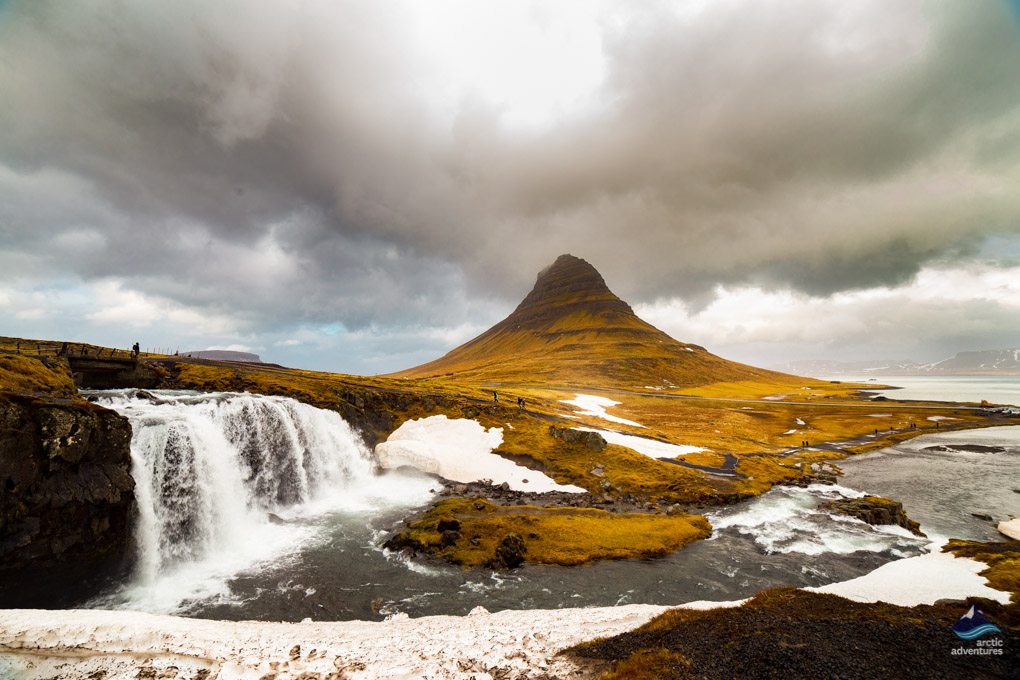 Kirkjufell routinely makes international lists for the most beautiful mountain in the world. It’s also a prime spot for viewing The Northern Lights. Unsurprisingly, it’s a veritable magnet for sightseers, photographers (both amateur and professional) and nature lovers.

There are plenty of ways to see Kirkjufell, such as on our two-day Northern Lights tour.

Game of Thrones, sadly, won’t be with us forever. But it’s reassuring and humbling to know that the show’s Icelandic mountains, valleys and seas will be with us for centuries to come.

Iceland has inspired writers, filmmakers and TV show runners for decades. And when you see this incredible country, you’ll know why. 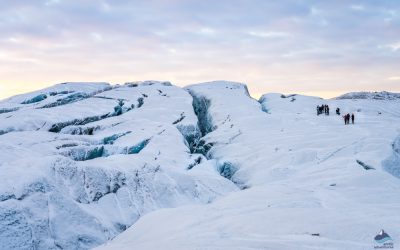 Winter has arrived in the seven kingdoms! And for a dedicated Game of Thrones fans, it’s not a moment too soon. 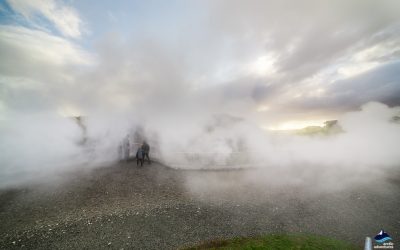 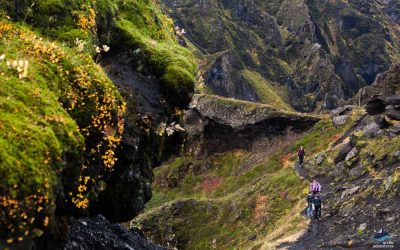 Þórsmörk the Valley of Thor

All About Thorsmork valley of Thor in Iceland, hiking trails, and facilities. Have you ever heard of this magical place? Where you can stand in between tall mountains, glaciers and volcanoes all at the same time while breathing in the beauty and preparing for a hike on the most unique trails. Here you will experience views of a lifetime.